Amid a generational shift, residents hold fast to the home country's customs 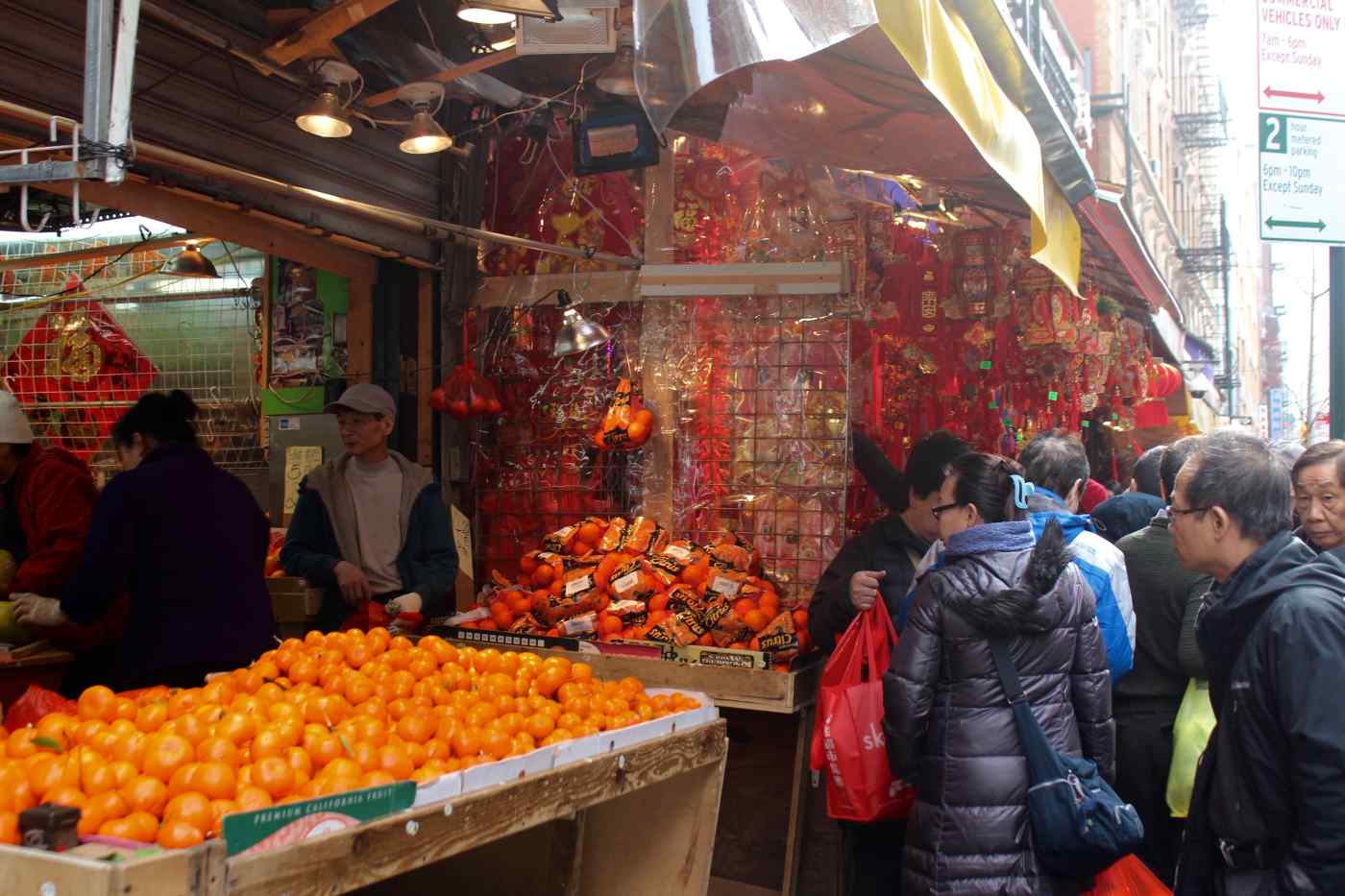 NEW YORK -- As this week's Lunar New Year drew closer, the streets of Manhattan's Chinatown were alive with preparation. Against the changes brought on by neighborhood gentrification and a generational shift, residents in this ethnic enclave worked to preserve a holiday steeped in tradition.

Fruit vendors' street carts, usually stocked with an array of Asian fruits, overflowed with golden clementines and pomelos, offering fortune and prosperity for just $2 a pound. Some replaced shelves of fruit with bouquets of flowers, a fragrant decoration and fertility symbol. Shoppers sifted through walls of red streamers and ornaments just to find storefronts.

It's a deceptive scene -- one might be forgiven for forgetting that this is an American city. But when the new year rolls around and the neighborhood stores fail to close, it's obvious that this is the city that never sleeps.

From 'ciao' to chow mein and beyond

Some 590,340 ethnic Chinese call New York home, according to American Community Survey estimates for 2016 -- the largest Chinese population of any city outside Asia.

New York now supports three major Chinatowns. But it is lower Manhattan's, the oldest of the bunch, that brings tourists in droves each year.

Leading a walking tour of the historic area there, Beatrice Chen pointed to a row of ornate buildings. Former Italian banks, she said, now repurposed as Chinese funeral homes.

Chinese immigrants first settled in lower Manhattan in the 1800s, after discrimination and persecution on the West Coast pushed Chinese migrant workers east, Chen, vice president for programs at the Museum of Chinese in America, told the tour group. The area remained predominantly Italian until the 1960s and '70s, she said.

Chinatown has since seen successive waves of immigration from the mainland as the neighborhood's Toisanese and Guangzhou Cantonese foundation made way for an influx of Fujianese immigrants in the 1980s and the Wenzhounese in the '90s. Unlike the mostly Mandarin-speaking population of the Chinatown in Flushing, Queens, this Chinatown is still very much a southern, Cantonese-speaking Chinese community, Chen noted.

Turn of the millennials

Wing on Wo is surprisingly social-media-savvy for a 93-year-old porcelain store. After taking over from her grandmother two years ago, 20-something Mei Lum embarked on an ambitious campaign to preserve the store's character while also reinventing it as a space for artists and community dialogue. Part of this meant giving Chinatown's oldest store a website and an Instagram page. These past two years have been both exciting and challenging for her father, Gary, who has been helping with the store's operations for around 30 of the 38 years since marrying into the family.

"The transition has been uncomfortable," the 63-year-old said of his daughter's project to rebrand Wing on Wo.

"You get set in your ways," said the father, who cited an older generation of Cantonese immigrants uninterested in digital-age marketing techniques. But with a generation of new consumers, he acknowledges that change is inevitable.

Though the family declined offers from tour companies for arranged visits, the store's online presence means that "a lot of people get to know us before we get to know them," he said. He now feels comfortable switching into story mode when visitors do come in seeking a history lesson.

Wing on Wo is not the only traditional family-owned business to reinvent itself. Since passing hands from uncle to nephew in 2010, the Nom Wah Tea Parlor, Chinatown's oldest surviving dim sum restaurant, has gone from stagnation to neighborhood hit. Young owner Wilson Tang saw the eatery through renovations and has opened four additional shops, including one in Philadelphia. And a once-discreet bubble tea and food stall in a Flushing mall became New York fast-casual sensation Xi'an Famous Foods when Jason Wang began marketing his father's recipes to the tune of hip-hop music.

"We're sort of at this turning point with Mei Lum, Nom Wah and other American-born Chinese," Chen noted.

"Now you see it's open season," with restaurants "not just catering to the residents anymore," she said.

Few neighborhoods have been spared in the rapid gentrification of the city, and Chinatown is no exception. Herb Tam, curator and director of exhibitions at the Museum of Chinese in America, says big changes to the area came around 10 to 15 years ago.

As a young, diverse crowd has come to populate Chinatown, it's become a "big tension point," he said.

"The way it's trending here is it's getting really unaffordable for a lot of these people that have been living here for a while," he said. 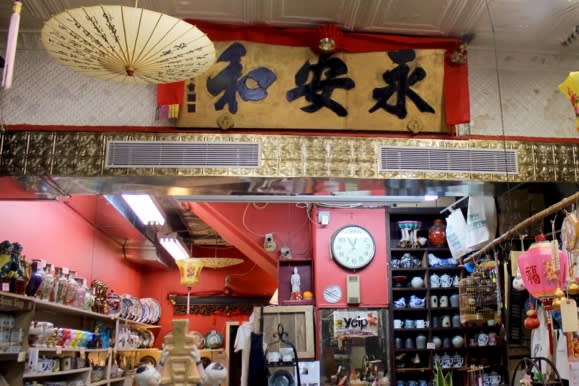 A sign indicates the Chinese characters for Wing on Wo, meaning "always peaceful," while a poster for the popular Yelp online review service hangs under a clock in the background. (Photo by Ariana King)

But despite the changing face of the city, New York's Lunar New Year celebrations flourish. "There's a real mentality to try to keep things as they are, to try to keep the traditions as they are," said Tam, who cited Lion Dance troupes here that pass on generations-old customs to perform in the annual parade.

"Whereas I think in China, there are more creative liberties taken around some of these customs," he added.

This trend also applies to food, Tam suggests. Cooks in the Chinese diaspora tend to hold on to certain things, like a style of cooking from a certain era, "whereas in China maybe they've left that behind or it's not trendy, things have changed and those traditions are just not that important," he said. For members of the diaspora, "they're the things that kind of root you or connect you back to a feeling of being authentically Chinese," he explained.

Chen acknowledges that New York's Lunar New Year parade is a wholly Chinese-American experience but argues that compared with the celebrations of Los Angeles and San Francisco, New York has done a significantly better job of hanging on to tradition. "There's something about New York City," she says, that has shielded it from the more touristy experience of its West Coast rivals.