Local cuisine, suppressed by decades of turmoil, is on the verge of an upgrade 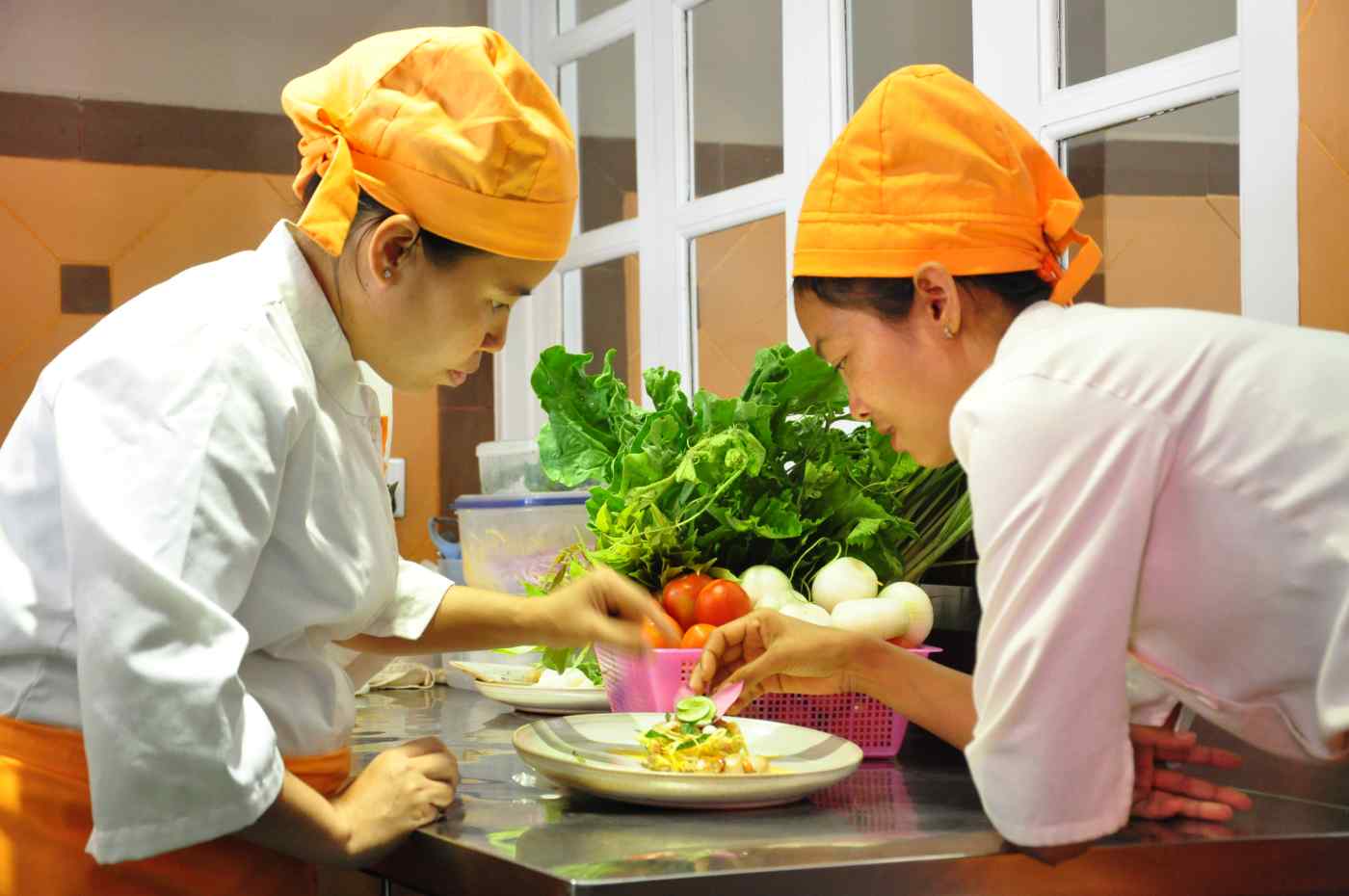 PHNOM PENH -- It is one of Asia's most unusual commutes. Once a week, Titi Vuthi drives his small "La Fattoria" refrigerated truck nearly five hours each way from Siem Reap to the Thai border, often waiting through the night for the customs office to open. His goal is to bring back a key ingredient that his native country lacks: fresh, unpasteurized milk. 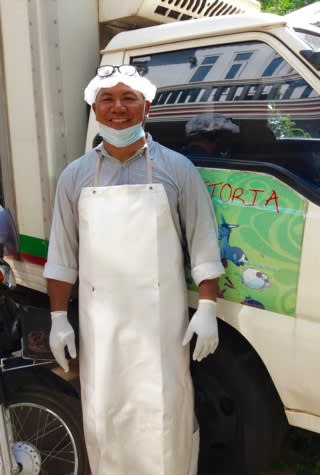 Titi Vuthi drives his small truck each way from Siem Reap to the Thai border. (Photo by John Krich)

Back in a small, tiled warehouse that looks remarkably hygienic despite its jungle surroundings, Titi -- outfitted in gloves and a hair net, and aided by rennet sent by regular mail from Italy -- shapes, stretches and cuts 25kg a day of dairy produce into Cambodia's only supply of freshly-made mozzarella, burrata, scamorza and other cheeses -- along with his home-cured version of Tuscan salami. Applying techniques culled from spending just a few months abroad, Titi works with the broad grin of a man who has found his true calling.

Not far away, across an ever-increasing expanse of restaurants in the boom town built on tourist pilgrimages to Angkor Wat, Pola Siv, 35, describes his eight-year voluntary exile from home to work as a dishwasher and waiter in Bahrain and the Cayman Islands, and then to train and study in Switzerland with the money he saved. Now, at his casual Mie Cafe, which was opened to serve noodles, he invents some of the most astounding, modernist combinations of local elements -- like his snakehead fish informed with roasted rice, wild mangosteen leaves and red ant powder. "For those eight years," he declared, "I was always thinking about this freedom to create what I wanted as a Cambodian."

The Cambodian food industry -- including traditional Khmer cuisine, suppressed by decades of war, famine and poverty -- is on the verge of a major upgrade. While a handful of ambitious chefs, both local and foreign, are presenting showy dishes, a genuine farm-to-table movement is being forged by new artisanal suppliers and farmers, augmented by the recent opening of the country's first internationally accredited culinary school. "In Southeast Asia, we're the ones who are coming late to the party," admitted Joannes Riviere, founder of Cuisine Wat Damnak, a scrupulously Cambodian Siem Reap gourmet restaurant. Having moved from France to teach at Sala Bai, one of several training restaurants run by nongovernmental organizations focused on giving basic employment and vocational training to street children and orphans, Riviere went on to research a cookbook and devote his life to elevating the profile of Cambodian fare.

"Compared to Thailand, we will always be behind in marketing and management. But it's a myth to say the Khmer Rouge destroyed cooking here -- they just destroyed a certain tradition of the urban elite, but the people's knowledge remained, and so has a great wealth of ingredients to draw upon."

These include many ingredients made famous in Thailand: lemongrass and tamarind, mangoes and pomelo, galangal and red rice. "No country has more succulent rice, judged the best in the world at many recent events," boasted Luu Meng, self-trained founder of numerous restaurants, including Malis in Phnom Penh and Siem Reap, the standard-bearers of high-end, tourist-friendly fare. Cambodia's many herbs and spices (Courtesy of Malis Restaurant)

Add to this not just prahok, the fermented fish paste many foreigners find unpalatable, but a unique array of fish from Cambodia's famous lake Tonle Sap, and numerous, little known spices and medicinal ingredients like moringa (a tree whose leaves are touted as a super-food). "Every day at the market, I seem to be led to something new," said South African culinary innovator Timothy Bruyns of The Tiger's Eye in Phnom Penh. "And Kampot pepper is the world's best," claimed Kien Wagner, executive chef in charge of the Anantara Siem Reap Resort's Chi Restaurant. "Remember -- the best Parisian steaks were topped with Cambodian pepper."

To help more locals gain the skills to reproduce the staples and signature dishes of Cambodia, Paris and beyond, the Academy of Culinary Arts Cambodia (ACAC) has just begun operations in a refurbished, four-story office building in downtown Phnom Penh. Never mind that the budget ran out before the founders could install a lift or stock the library. Donated by a Hong Kong businessman, funded by Swedish development funds, and with its million dollars in kitchen equipment augmented by discounts from Swiss suppliers, the school aims to imbue its students with the standards of Lucerne's renowned Hotel Management School. Its first class, paying reasonable tuition fees, numbers 28, but the goal is to train 200 students each year in a two-year program. "It just isn't possible to go from nothing to a professional, to move up the value chain in three months," said director Markus Kalberer of the well-meaning attempts of nongovernmental organizations that had earlier attempted to teach locals about culinary and hospitality industry skills. Alternating classes and internships, Kellerman promises not just to teach "the sauteeing and frying that are basically the same everywhere," but a new ethic of cooperation and English skills to help graduates thrive in any kitchen. The school will also offer short courses for those already working in the field.

"There's a mindset here that cooks don't need education," he observed. "But being a chef isn't just chopping an onion, and in this country, there's hardly any information about this career path." With tourism already contributing about 29% to Cambodia's gross domestic product each year, according to government figures, and estimates that the 8 million tourists arriving by 2020 will generate nearly 200,000 new jobs between now and then, the new culinary academy can confidently guarantee students a job after graduation. "And this is without the country being properly promoted as a destination, with big markets like India hardly tapped." A Happy and Co. farm worker (Photo by John Krich)

But the great restaurants of tomorrow will also require a fresher, healthier and more diverse range of food staples to draw on. Cambodia's produce sector is dominated by cheap imports from Vietnam and Thailand that many critics describe as largely poor quality and laden with excess pesticides.

To counter this, Happy and Co. Farm was founded six years ago by Australian Gary Hilton. Now the 80,000-sq.-meter operation is supervised by young Cambodian Sokha Khut, who is adding more greenhouses to protect unusual crops and farm workers from excessive heat. The farm, 25km from Siem Reap, delivers to 60 hotels and restaurants already, even though consumers still have to "pay double" for vegetables without pesticides, according to the manager, and some hotel buyers profit from supplier kickbacks.

Happy and Co. also provides unusual items like parsley, rucola and beetroot. But the emphasis is on health, and Sokha Khut says Cambodians themselves are becoming more conscious of cancer risks and "would rather pay us instead of paying the doctor."

Agrisur, an international NGO, has also set up in Siem Reap, enlisting more than 1,000 independent farmers to join its program and learn how to farm organically. The group has started a food distribution center called "Green Farmers from Here," with the ultimate goal of opening Cambodia's first genuine farmers' market within a year. 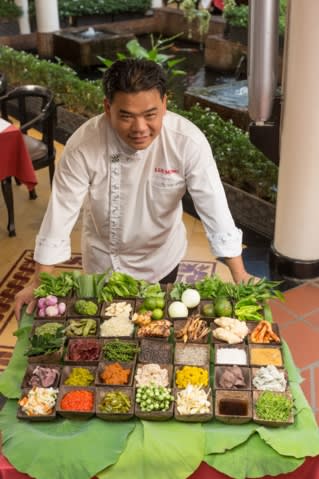 "Buying local is good for the economy and environment," said Agrisur country representative Seng Picheth. Another goal, he noted, is to keep families on the land rather than seeing them move to big cities, or migrate to Thailand for seasonal work.

A third local NGO, also aimed mainly at providing employment, took a survey of restaurants' needs and founded Eggscellent, offering fresher eggs as well as more humanely treated hens than those reared in battery coops by large commercial concerns. Close to Phnom Penh, local chefs such as Luu Meng have been counting on the exceptional pork from La Ferme du Bassac. The business was founded with only two pigs in 2010 by Frenchman Thierry Pradalet, after he "fell in love with the Cambodians" and realized that "the countryside nearby resembled Normandy." Learning everything from Google, he says, and trying to avoid too much vaccination, he "lost $60,000 in one night" when disease wiped out his stock. But now his happy pigs have their own swimming pool, come in all colors and are chemical-free, although "there is no standard certification for organic in this country yet," he noted.

Neither is there a way to categorize the efforts of places like Mie Cafe, or Embassy, a two-year-old creation of two dedicated chefs, Pol and Sok, who call themselves "twins" because they share the last name of Kimsan -- and have proudly hired an all-female staff. This harbinger of sophistication even suggests prosecco, Italian-style sparkling wine, to go with a tasting menu appetizer of grilled pork balls topped with lychee, water lily stems, shallots and kamplor leaf.

Already, Siem Reap and Phnom Penh host a profusion of offerings from Korean to Tex-Mex. But to win a permanent place for Cambodian cuisine at the table, the industry must now go beyond "what we all learned from our mothers and grandmothers," said Luu Meng. "We need to know everything about where products come from, how the pigs were fed." Or as academy director Kalberer put it: "For Cambodia now, the old standards are not good enough."