Watching the world's biggest mammals is big business in Australia

PORT STEPHENS, Australia --Two mottled gray-white shapes are gliding behind our 16-meter catamaran, as the vessel plows into a stiff Tasman Sea breeze about 5 km off Australia's east coast.

There is a collective gasp from the 25 passengers as the long shapes come almost within touching distance of the stern, then quickly veer to one side, breaking the surface to reveal themselves as humpback whales, curious to check out the strangers in their environment.

Our skipper, whale-watching veteran and environmentalist Frank Future, is grinning broadly as he keeps the boat on a steady course while the whales ride the waves next to us. Future does this trip nearly every day during the May-November season, but he says the thrill of seeing these giant mammals up close is as fresh as when he started doing tours from Port Stephens, 150 km north of Sydney, more than 20 years ago.

Whale numbers in the seas here are growing every year, according to Future. He provides a running commentary during the 90-minute cruise, pointing out distinctive aspects of the humpback whales that we encounter, then scouting out southern fur seals and bottlenose dolphins on the run back into Port Stephens.

The likelihood of seeing the spectacular splash that follows when a 50-ton, 16-meter humpback leaps out of the water or slaps its huge tail becomes more frequent at this time of year, as thousands of whales swim south along the "Humpback Highway" off the Australian coastline. They are traveling home with their offspring, after mating and calving in warm tropical waters to the north. 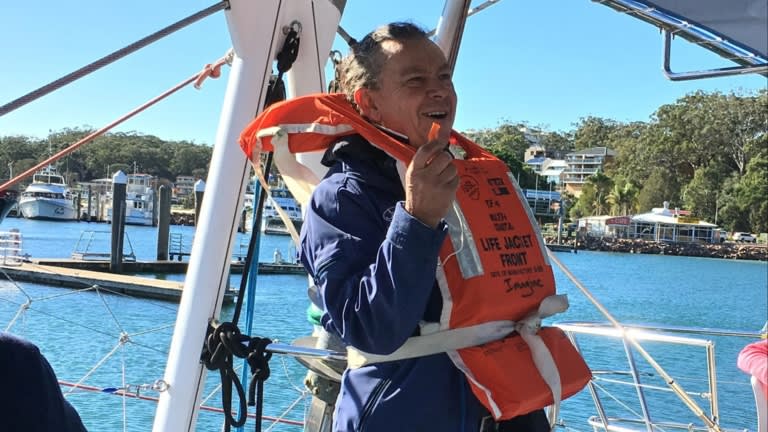 Over the next few weeks, the numbers moving south toward Antarctica will start to dwindle as one of the world's great mammal migrations -- 65,000 humpbacks making the last leg of a 10,000 km round trip from the icy waters of the Southern Ocean -- comes to an end. About 35,000 will swim along the Australian west coast, while the others travel via the east coast. For six months from mid-November, the whales will feed and thrive in the nutrient-rich Antarctic waters, before starting their arduous cycle again in May.

Humpbacks were once hunted almost to extinction in Australian waters for their blubber, oil and bones. But the magnificent mammals are now the centerpiece of a new whaling industry in which cameras have replaced harpoon guns and tourist-laden boats dart out from a dozen east and west coast ports to marvel at nature's passing parade.

For former whaling towns such as Eden on the east coast and Cape Leeuwin in the west, Hervey Bay on the Coral Sea coast -- the main eastern breeding ground -- and in the warm Indian Ocean waters of Ningaloo Reef and the Kimberley coast, whale watching is among the fastest-growing sectors of the swing to ecological tourism.

Augusta, the west coast town closest to the point where humpbacks and southern right whales begin traveling along the coast, hosts a whale song festival at the beginning of June. On the east coast, Hervey Bay has a whale festival in August, and Eden marks the whales' journey south with a festival in November.

The industry is worth at least 1.5 billion Australian dollars ($1.02 billion) a year, according to Tourism Research Australia, a government agency. While domestic holidaymakers account for much of this, Australia also rates highly for "nature-based tourism" among overseas visitors, particularly those from China, the U.S., New Zealand, the U.K. and Japan. About 638,000 of the 9.3 million international visitors to Australia in the year to June took part in a whale-watching experience, up from 426,000 a decade earlier, the agency said.

A typical 90-minute cruise costs about AU$60 for adults, while longer cruises run to AU$100 or more. Cruise operators have also expanded into more intense marine experiences, such as swimming and diving with whales, whale sharks and wild dolphins. These activities cost from AU$165 to more than Au$400, depending on location and time involved.

Nor does whale-watching have to be offshore-based. Sometimes pods of whales enter busy ports, including Sydney, where they swim as far upriver as the Sydney Harbour Bridge to delight ferry commuters and office workers looking down at them from buildings in the central business district. Headlands such as Tomaree, at Port Stephens, and the Cape Byron lighthouse, near the border between the states of New South Wales and Queensland, also offer good vantage points. 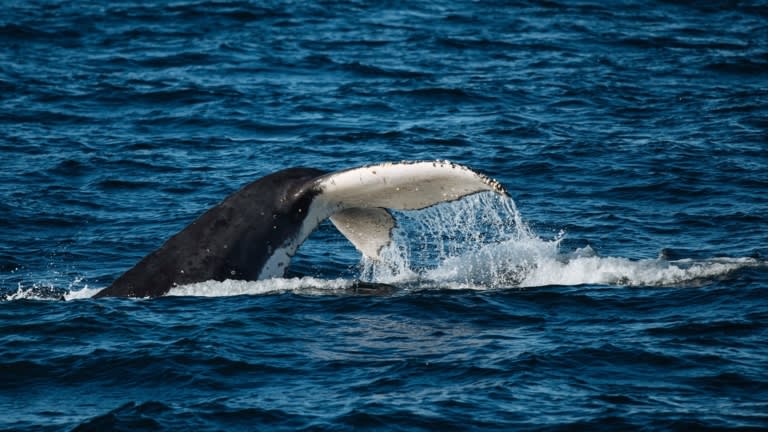 A humpback whale near Sydney Heads on its annual migration along the New South Wales coastline. (Courtesy of Destination NSW9)

Not all whales swim to the tropical north. Some southern right whales travel only as far as the temperate breeding waters off the states of South Australia and Victoria, and some seek shelter in Tasmanian waters.

In the early 19th century, whalers from around the world converged on Australia and began hunting whales from bases in the then-British colonies of Tasmania, New South Wales, Western Australia and Victoria, and from the offshore Australian territory of Norfolk Island. The whalers hunted mainly southern right, sperm, humpback and bowhead whales to meet demand in Europe and North America for whale oil and whalebone, also known as baleen.

Whaling was one of the most important maritime industries in Australia until the middle of the 20th century, but excessive hunting brought species such as the humpback almost to the point of extinction. Australia banned humpback whaling in 1963 and instituted a complete whaling ban in 1978.

The country's last whaling station, at Cheynes Beach, near Albany in the state of Western Australia, took its last sperm whale in November 1978. Since then, Australia has been at the forefront of whale conservation efforts, establishing areas such as the Southern Ocean Whale Sanctuary, which has the largest concentration of whales in the world.

That stance has had political repercussions: Australia describes its relationship with Japan as "our closest and most mature in Asia," but whaling is one of the few areas where the two countries find themselves in sharp disagreement. Japan conducted what it claimed was scientific research within the Southern Ocean sanctuary for many years after 1978, prompting Australia to send ships and aircraft there to monitor its activity.

The area was also the scene of numerous encounters between Japanese whaling vessels and protest ships operated by Greenpeace and the Sea Shepherd group. Australia took Japan to the United Nations International Court of Justice in 2013, winning a ruling in March 2014 that its Southern Ocean whaling activities were non-scientific and illegal.

In December last year, Japan said it was ending whaling in the Southern Ocean and withdrew from the International Whaling Commission, an international agency set up in 1946 to conserve whale stocks. It resumed commercial whaling in mid-2019, though only within its own North Pacific waters.

Australian Foreign Minister Marise Payne said on July 2 that while she was pleased the Southern Ocean would now be a true sanctuary for whales, Australia remained "opposed to all forms of commercial and so-called scientific whaling."

This sentiment is heartily endorsed by Future and other Australian whale cruise operators who carry an "eco-tourism certified" sustainability rating from Ecotourism Australia, a national organization. All are keenly aware that their livelihood depends on keeping the Humpback Highway open for business.