A new drug, counselling app will be made available in Japan for the first time TOKYO -- New treatments to help quit smoking and overcome alcoholism are set to be made available in Japan, signaling a shift in the country's approach to dealing with common addictions.

By the end of the year, Otsuka Pharmaceutical hopes to gain approval for the manufacture of a new drug to treat alcoholism. If given the go ahead by the Ministry of Health, Labor and Welfare, it would be the first drug in Japan designed to gradually reduce a patient's consumption rather than to try and make them go cold turkey. It could be put on the market as early as March.

Nalmefene, as the drug is called, affects secretions in the brain and reduces the desire to drink. The drugs currently on the market work in a more direct, and sometimes distressing, way, such as by making a patient feel nauseous when they consume alcohol. Japanese public has its say on how to regulate casinos

Otsuka Pharmaceutical has already completed the third and final phase of its clinical trials of the drug on 660 patients in Japan. Before the trial, participants consumed three 500-milliliter bottles of beer or more a day an average of 23 times a month. That number fell to 11 after the six-month test.

There are an estimated 1 million alcoholics in Japan, yet less than 10% actually receive treatment. Only 30% of those who do succeed in overcoming their addiction after one year.

If the drug is approved, Otsuka Pharmaceutical could start marketing nalmefene to physicians and psychiatrists who treat alcoholics by March.

Outside Japan, medicines such as Topiramate, an epilepsy drug, and the muscle relaxant Baclofen have reportedly been effective in suppressing cravings for alcohol. France is considering the approval of Baclofen for use as a treatment for alcoholism.

In an altogether different approach, a Tokyo-based medical startup in October began a clinical trial of a smartphone app designed to help people give up smoking.

CureApp plans to seek approval in 2019 for what would be the first such service covered by the country's national health insurance program. In 2014 the health ministry announced an intention to approve apps for addiction treatment.

The service provides counseling to support patients in their efforts to quit independently by teaching them ways to suppress the desire to smoke based on the psychological approaches used in hospital treatment, as well as by sending messages of encouragement. 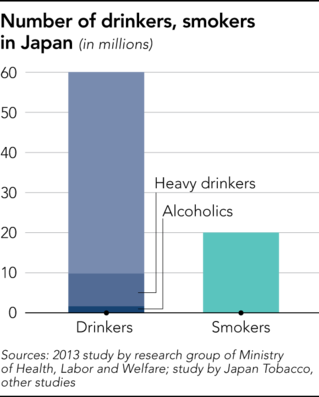 The aim is to provide support with the psychological aspect of addiction. Several similar apps are already available in the U.S., which have been proven in clinical trials on as many as 100 people.

In Japan, an estimated 6 million people try to give up smoking every year, 250,000 of whom seek medical help. Yet the success rate stands at just under 30% after a year.

Many overcome the physical addiction to nicotine, but the psychological aspect requires more than can be provided in the limited time spent undergoing treatment and many fail in the end.

The app is designed to help patients continue the process independently and could be a game changer in the way patients are treated.

While their methods may differ, the two companies share a common approach -- shifting the focus from trying to coerce patients out of bad habits to one of helping them overcome their problems on their own.