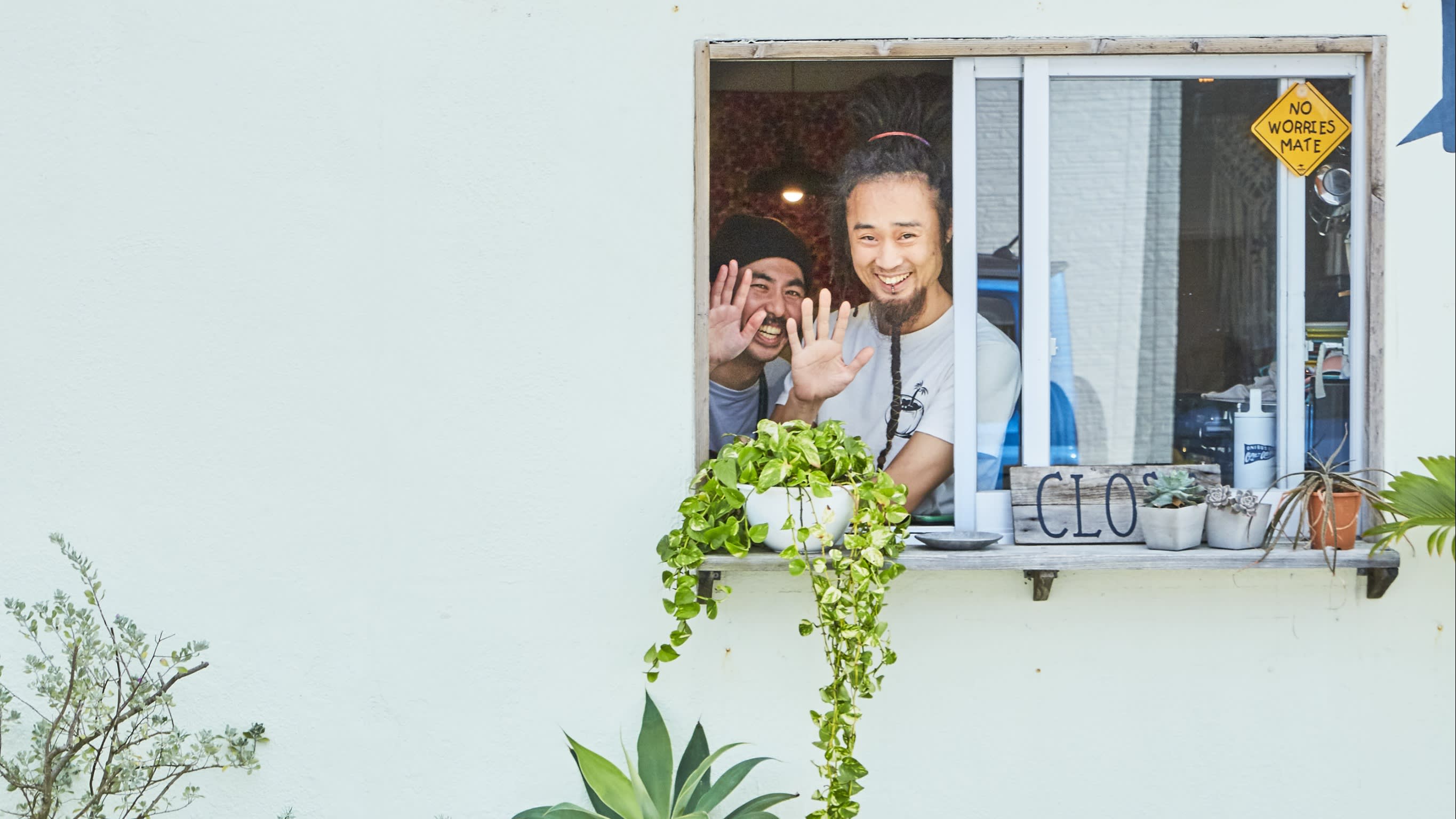 “Okinawa is an island of shorts and bi-san (beach sandals) all year-round; I sometimes wonder how our business has survived for 30 years here,” says Akio Nashiro. Along with his wife and daughter, the 55-year-old runs Walker, a fashion boutique in Okinawa, Japan’s southerly subtropical island prefecture.

Walker carries desirable labels such as New York’s Engineered Garments and Tokyo’s Needles that are known for jackets and trousers with cool design twists. But selling cutting-edge urban fashion here can be something of a challenge.

Strung out a distant 1,500 km from the Japanese capital -- three hours by plane -- the islands of Okinawa (population 1.4 million) are home to crystal-clear waters, vivid hibiscus flowers and rare indigenous species of plants and animals. Okinawa has always attracted holidaymakers from mainland Japan and in the past decade, especially after the 2011 earthquake, a younger crowd -- artists, potters, cafe owners and designers -- has moved from cities, drawn by the island’s slow lifestyle and unpretentious charming inhabitants, who love to sing, dance and drink.

Although this crowd is refreshingly uninterested in the latest runway looks from Paris, New York and Tokyo, Okinawans do have their own style -- and plenty of it. “There is an Okinawa time and rhythm of life flowing on the island,” says Nashiro. “There is Japan and there is Okinawa, just like there is America and Hawaii.” 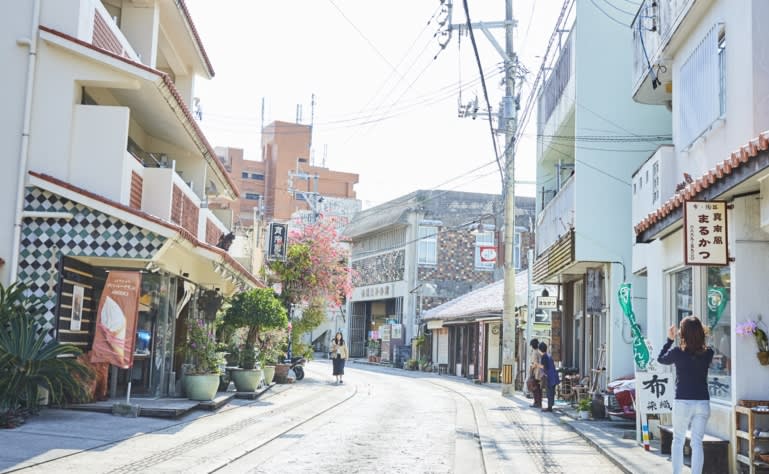 For down-to-earth Okinawans, function and fabric are more important than trends. In the scorching summer heat, the standard office attire for bureaucrats is the kariyushi (Okinawa’s answer to the Hawaiian shirt): a short-sleeve, brightly colored print shirt. Residents’ ensembles reflect a generally optimistic attitude to life that’s best exemplified in a popular Okinawan phrase, “Nankurunaisa” (“it’ll be alright”).

Orrs is a men’s fashion label that encapsulates the vibe of Okinawan style and is based in Chatan, a town of 29,000 located 40 minutes’ drive north of the capital, Naha. The brand’s director, Yosuke Sato, worked at Ralph Lauren and Tokyo label Phigvel before moving to Okinawa with his wife, Wakako. “Our clothes are cut for a loose fit to suit the hot Okinawan climate,” says Sato, who is wearing the brand’s signature navy linen separates.

The collection -- predominantly white and navy -- is designed for heat and humidity, featuring linen shirts, leather sandals and Panama hats, made in Ecuador. Although the brand is popular among islanders and clued-up shoppers on the mainland, they sell exclusively at their Chatan shop or at pop-ups. “We like to think of [an item bought here] as a souvenir from Okinawa,” says Sato. “That scale of business feels right to us.” Top: Wakako and Yosuke Sato at their shop in Chatan. Bottom: Surfing is big in Okinawa.

“Okinawa doesn’t have a high fashion scene,” says Dan Shinjo, who along with his school friend Shimon Matsumora runs Naha-based fashion retailer Plant & Soil. “In recent years locals started appreciating products that are made in Okinawa; before, people preferred things from outside.”

Their original hoodie -- dyed in Okinawa using indigo and red mud -- is a recent big hit. Ryukyu’s heritage crafts, such as bingata and aizome natural dyes, have also drawn the attention of notable designers, such as Hiroki Nakamura, founder of Toyko label Visvim. Okinawan culture is a beguiling melange of American (Spam is still popular), Japanese and deep-rooted Ryukyu influences. “I’m an Okinawan born and bred, so it takes the outsiders to tell me how different we are here,” says Nashiro. “I’d describe it as champuru (mixed-up) style.”

Indeed, Okinawa is refreshingly foreign even to many Japanese people in everything from its food and dialect to its architecture and crafts. Until it became part of Japan in 1879, it was a political entity of its own, known as the Ryukyu Kingdom. For more than 400 years, from the 15th century, it established a unique culture, with its own diplomatic and economic relationships with Asian neighbors, such as China and Taiwan. It’s also where karate developed; the martial art that was inspired by indigenous fighting methods. Every region of Japan has its own distinct character and history, but remote Okinawa might have the most mixed identity of all. Although the island is often hit by punishing typhoons, its warm climate and rich nature have done their part to shape its peoples’ open, kind and laid-back personality and upbeat outlook.

But not everything is sunny. As monocle drives from Naha -- which is not just Okinawa’s capital city but home to what used to be the Ryukyu Kingdom’s royal palace, now named Shuri Castle -- to Chatan and further up to Onna, we feel the presence of America in the U.S. military bases and former military houses. Gate Street in Koza, by the Kadena Air Base (which was previously used as an emergency landing area for space shuttles), is lined with barbershops, nightclubs and tattoo studios catering to the troops; some places accept U.S. dollars. A daily scene around the U.S. military bases in Okinawa.

Okinawa was the only ground battlefield in Japan during World War II. One of the bloodiest battles in the Pacific saw nearly 200,000 deaths (including 94,000 civilians and 12,500 U.S. soldiers) and the prefecture was occupied by the U.S. after the war until 1972. Today it controversially hosts the largest proportion of the U.S. military personnel in Japan -- 26,883 including 15,000 marines. The whirring sounds of military planes and lane-wide Hummers are deeply engraved in the Okinawan landscape against the blue sky and tropical green landscapes.

Although Okinawa is the poorest prefecture in Japan, the islanders are full of joie de vivre and the quality of life is measured very differently here. Work-life balances are prioritized -- people take days off to surf in places like Chatan and Itoman (with sea turtles) or simply to relax. “I’m happy I was born as an Okinawan,” says Yoshiko Shimabukuro. The 93-year-old islander opened the Okinawa Daiichi Hotel in 1955 and has since served countless guests in Naha. Born in Taiwan during the war, she grew up in occupied Okinawa; she has lived through the roller-coaster ups and downs of prefecture’s recent history.

Shimabukuro rises at 5 a.m. to tend the garden of her four-room inn, where she exercises in the pool once a week. She is grateful that she is still healthy and able to work.

“My dream is to open a hotel in a two-story wooden structure,” she says with a big smile. When monocle shares this story with her daughter, Katsue, who helps the business, she nods. “She means it,” says Katsue. “My mother is a quintessential Okinawan -- always positive.”