Hansen's book opens in the jungles of Borneo, one of the world's largest orchid breeding grounds, where he and members of the seminomadic Penan tribe are guiding two American orchid growers who want to photograph the rare Paphiopedilum sanderianum, a rare species endemic to the island. It is, writes Hansen, "the holy grail of orchids [which] only a dozen botanists on earth have seen ... in the wild."

The orchid craze started in England after British plant collector William Swainson sent a box of exotic plants, including orchids, from Brazil to England in 1818. It was not long before obsessive collectors were being attacked by tigers, burned alive, and speared to death by tribesmen in the far-flung corners of the world where many species grow.

Two centuries later, Southeast Asia remains one of the world's top orchid destinations. With more than 4,000 endemic species, Indonesia has probably the largest number in Asia, followed by Malaysia, which is home to 3,000-plus species. The Philippines has 1,100 species, and Myanmar 1,040, according to the botanical journal PhytoKeys in 2020.

But new Malaysian research is also shedding light on a little understood, and yet increasingly destructive, aspect of botanical interest -- the discreet, but booming, online market for rare wild orchids. 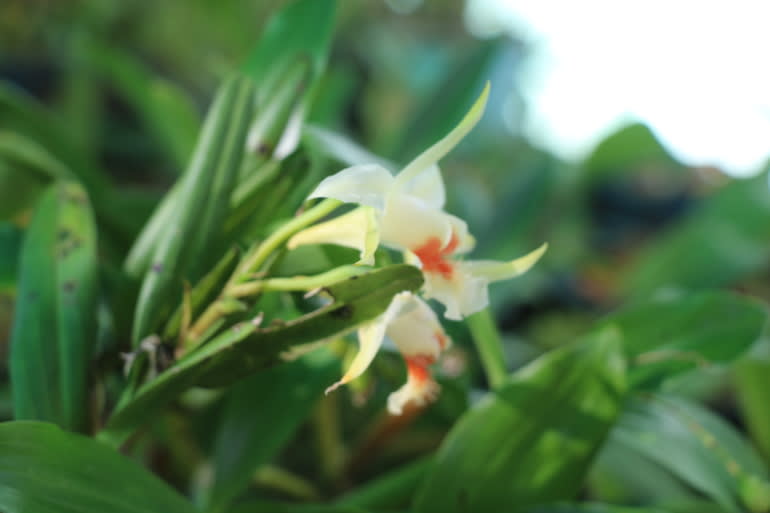 Top: Flowers and plants are sold on the Thai side of the border near the Three Pagodas Pass between Thailand and Myanmar. (Photo by Kit Yeng Chan) Bottom: Wild orchids have strong appeal among collectors around the world. (Courtesy of Japha Se)

"The internet has accelerated the pace of unprecedented biodiversity loss," says orchid enthusiast Rexy Prakash Chacko, co-founder of Penang Hills Watch, which monitors deforestation activity in the Malaysian state of Penang. Rexy's new book "Orchids of Penang Hill," co-written by botanist Santhi Velayutham, was supported by The Habitat Penang Hill, a private nature park on Penang Island, and aims to help people appreciate the diversity of wild orchids on the island while raising the alarm about illegal trading.

The illustrated book coincides with Penang State's recent application for Penang Hill to be labeled a UNESCO Biosphere Reserve, but the area has long been a botanical haven. The British botanists Charles Curtis and Henry Ridley reported 90 species in the first catalog published in 1894, and a 2017 tally found 144. "Since we could add a few more sightings to that list ... we decided to conduct our own survey, and the idea soon morphed into writing a pictorial orchid book," says Santhi.

The authors' goal is to promote the natural diversity of Penang Hill while encouraging nature lovers and hikers to recognize and protect the flowers. "The showier wild orchids like P. barbatum, commonly known as the Penang Slipper Orchid, have been depleted for some time, and collectors now poach any orchids they can find," says Rexy. "Orchid-themed groups on Facebook allow them to reach a wide net of customers nationwide, with little regulation or action taken to block sales." The Convention on International Trade in Endangered Species of Fauna and Flora, to which most Southeast Asian countries adhere, has strict measures in place to control the trade of 35,000 species, 70% of which are orchids. But the fleeting nature of social media makes digital transactions difficult to track and control.

"In Malaysia, collectors sell orchids on Facebook for as little as 5 ringgit ($1.23) and upwards to 100 ringgit per plant," Rexy says. According to a 2018 article by Mongabay, a not-for-profit environmental organization, global orchid traffickers are also active on eBay, where they can cast their nets even wider. P. canhii, an orchid discovered in Vietnam in 2010, was almost poached to extinction within six months of its identification because of intense demand from online customers.

The threat to orchids is undeniably real: Ruth Kiew, an expert at Forest Research Institute Malaysia, told the news portal The Malaysian Insight in July that many of the country's wild orchids might become extinct in the next five to 10 years if the rate of illegal harvesting is not reduced. "Orchids can be protected if they grow in areas such as national or state parks, wildlife reserves, or forests [where] one needs a permit to enter and a license to collect live plants," says Ong Poh Teck, an orchid expert at FRIM. Ong said plants are at highest risk of illegal collection when they grow in unprotected areas that are too large to patrol.

Illegal orchid poaching is also spreading to less-developed parts of Southeast Asia such as Myanmar, whose orchids are among the least known in Asia because of the country's lengthy political isolation.

Myanmar's most unique orchids are concentrated in the remote area of Putao, in Kachin State, 1,500 km north of Yangon. Wedged between India's Arunachal Pradesh State, China's Tibetan Autonomous Region and northwestern Yunnan Province, Putao lies in the shadow of Hkakabo Razi, which at 5,881 meters is Southeast Asia's highest peak. The area was accessible only by air until a road link from Myitkyina was completed in 2018, but COVID-19 has contributed to its continued isolation. 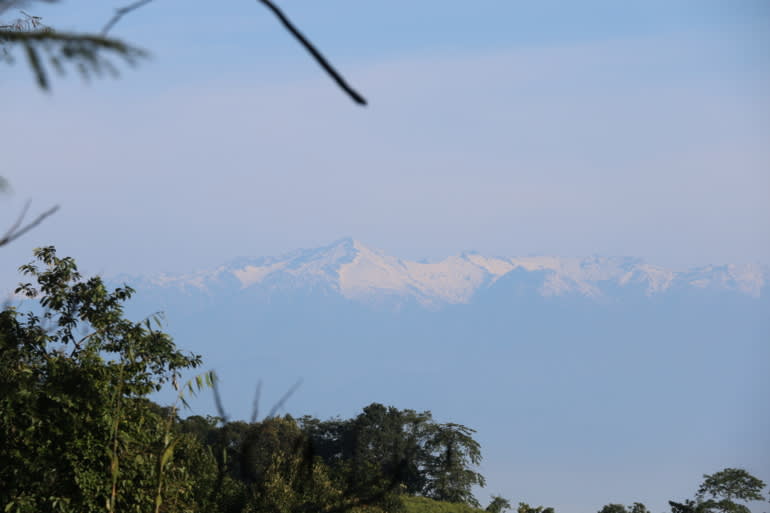 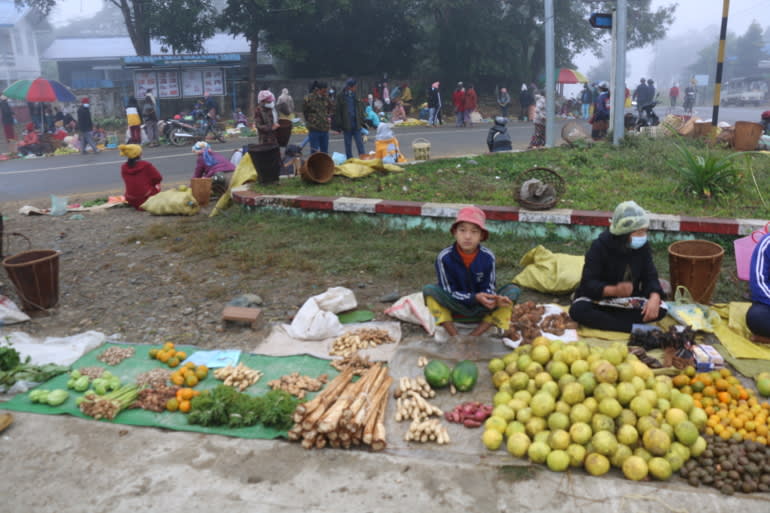 Top: A view of the Hkakabo Razi mountain range from the remote Myanmar town of Putao. This outer part of the Eastern Himalayas is on the waiting list for UNESCO World Heritage induction. Bottom: Street sellers in Putao, where orchids are often offered to tourists as souvenirs. (Courtesy of Japha Se)

The Nomung district of Putao is the only place in the world where P. wardii, known as the Black Orchid because of its dark maroon flowers, can be found. It grows between rocks and carries the name of British botanist Frank Kingdon-Ward, who began researching Kachin's orchids in 1914.

The uniqueness of this flower has not yet triggered a countdown to extinction because local people collect only a small number of plants, some for use in traditional medicine and others for sale as souvenirs to the few intrepid travelers who trickled into Putao's Nomung Market before COVID-19 halted tourism.

However, Japha Se, a Putao-born tourist guide and owner of the Icy Myanmar travel agency, says social media is becoming an attractive platform for the Black Orchid market. "The most popular items right now are not the orchids, but poached animal parts and medicinal plants that are more profitable and easier to sell to Chinese traders," he says. "But I fear that sooner or later even our wild orchids may attract more attention." 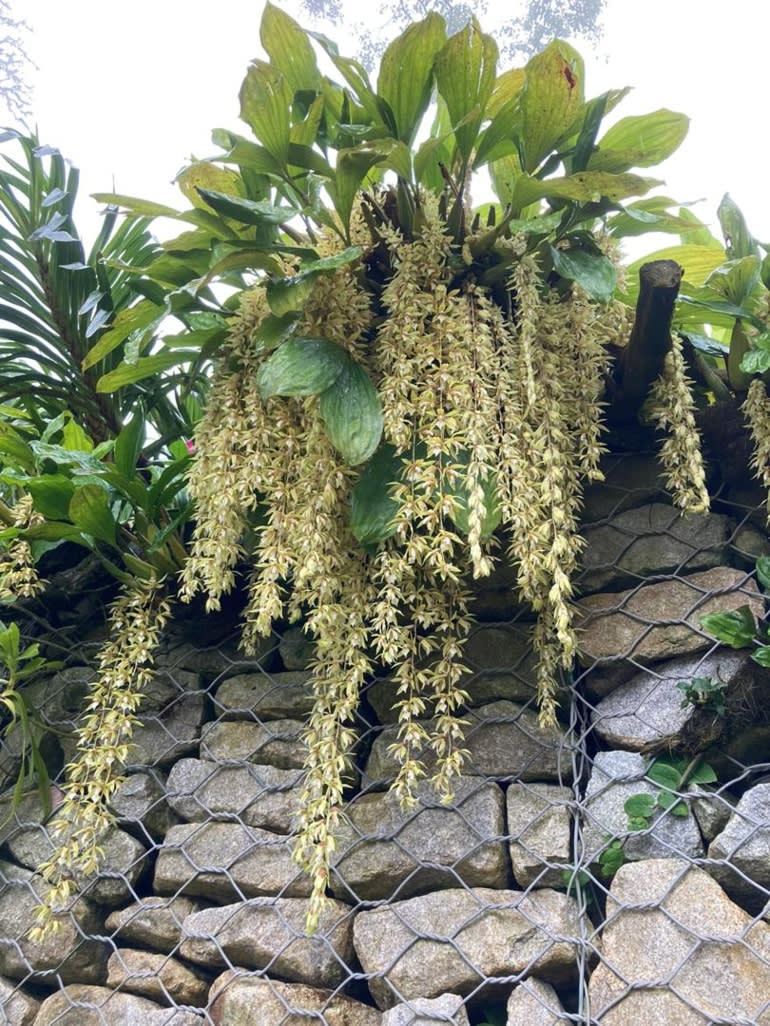 A necklace orchid spills over a wall at The Habitat on Penang Hill. Orchids come in many colors, shapes and sizes. (Courtesy of The Habitat)

The Wildlife Conservation Society, an international conservation group based in New York that partnered with Myanmar's Forest Department in 1993, says the area has more than 200 species of orchids. The proposed listing of the Hkakabo Razi National Park as a UNESCO World Heritage Site, which was halted in December 2017 amid local protests, could assist conservation efforts by "stopping the cronies who currently exploit the park's mineral and natural resources," says Se.

Rare orchids also face serious risks in other parts of Myanmar, including the Chin Hills and the Naga Self-Administered Zone along the border with the Indian states of Manipur and Nagaland, where locals collect and sell the plants to local markets and buyers across the frontier.

"A better road infrastructure makes it very easy for traders to transport orchids and animal parts to the border," says Se, "and that's where I am most worried that our orchids may soon become extinct."