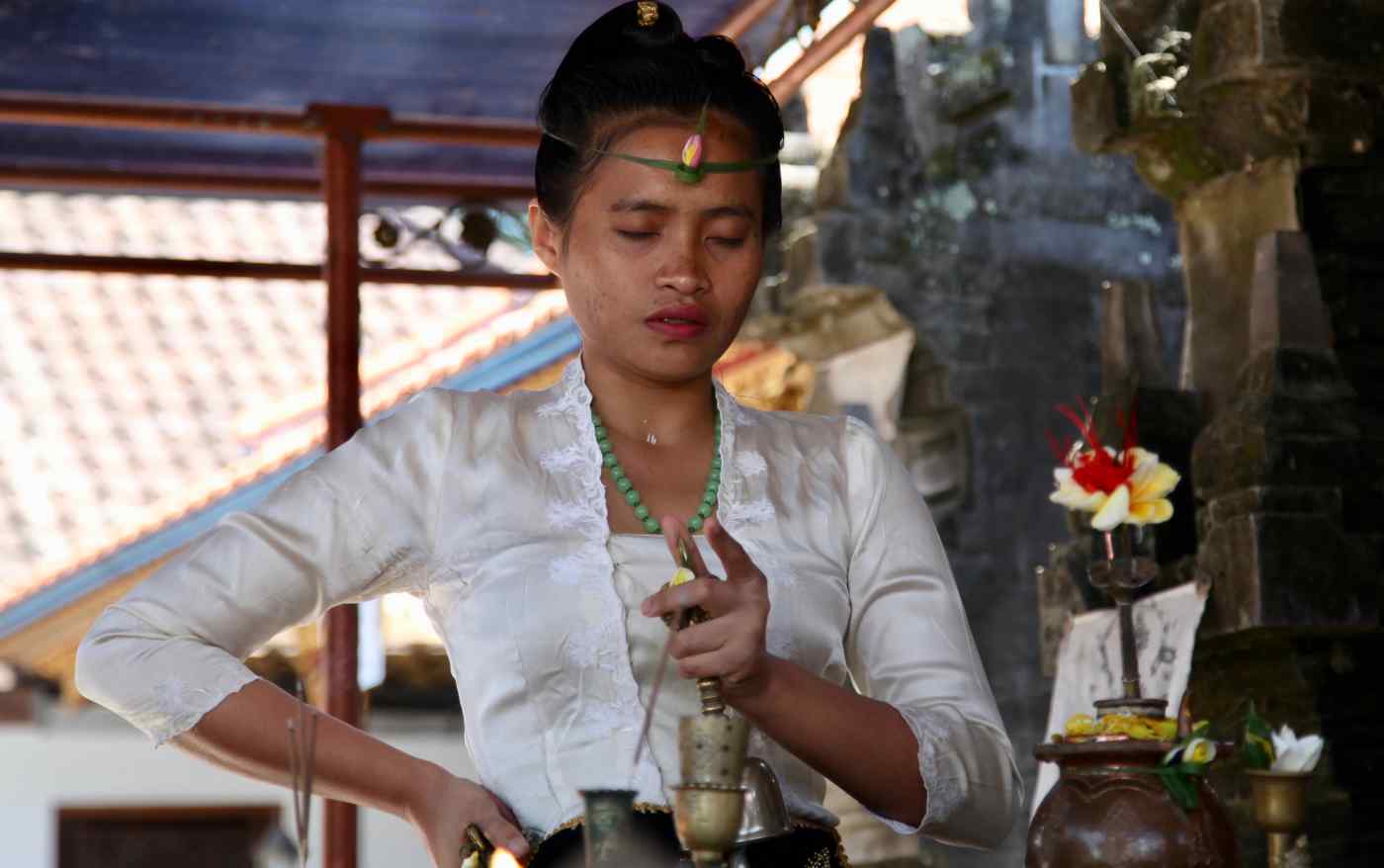 DENPASAR, Indonesia -- On the popular tourist island of Bali a prolonged drought has been followed by heavy rain. The tropical downpours can be sudden and drenching -- even stopping traffic in their wake. But the weather is a godsend for the island's mystical "rain stoppers."

Using meditation and prayer to communicate with spirits, who allegedly control the weather, and plates of fire whose rising smoke is thought to push clouds away, these shamans are paid hundreds of dollars a time to help ward off the rain at weddings, outdoor parties, golf tournaments and building sites -- any event where clear skies are essential for success.

"The success rate is actually pretty high," said Hasianti Deamita of Alila Hotel Seminyak, which offers rain stopping as one of many services that brides and grooms can add to their wedding packages. "The last wedding that used them, the rain stopped right before their ceremony and started again just after the reception wrapped up."

Marian Carroll, director of public relations at the Four Seasons Resort Bali at Jimbaran Bay, shared a similar story. "We had a rain stopper at our New Year's Eve party last year because there were dark clouds above us and it was threatening to rain all day," said Carroll. "The rain held off for the midnight fireworks display and then it absolutely poured a few minutes after the fireworks ended."

There are around 100 rain stoppers working in Bali. Among the most famous -- and highest-ranked on a tightly guarded list of rain stoppers compiled by wedding planners -- is Agung Astawa, a former cafe owner who says he was drawn into the role by divine forces. "In 2008, I was invited to have a coffee by a friend at the house of a guru. I didn't even know he was a guru," Astawa recalled. "He looked at me and said: 'You have the potential to be a great rain stopper. Do you want to learn?'" Astawa, who charges $350 a time for his services, claims an "almost 100%" success rate. "In 2018, I got a phone call from an organizer for the World Bank-International Monetary Fund annual meeting," he said, referring to an event that attracted 17,000 delegates from 189 countries to Bali, including Indonesian President Joko Widodo. The call was from a member of Indonesia's presidential security force, who was assisting in logistics for the event.

"They had brought in a rain stopper from [the nearby island of] Java, but before the main event it began to rain. I opened my computer, found the venue on Google Maps and focused my thoughts on the exact location. Within five minutes, it stopped raining there. Then I got on my motorbike, rode to the venue and spent the rest of the day praying to make sure the rain stayed away until the end."

It is not unusual for organizers of major events in Bali to hire more than one rain stopper, or for several rain stoppers to work in nearby locations at the same time. The latter is one of the reasons invoked by rain stoppers to explain why their services are not guaranteed. Technically they are "rain pushers" rather than rain stoppers, so shamans can inadvertently push clouds to venues that other shamans are trying to keep dry. 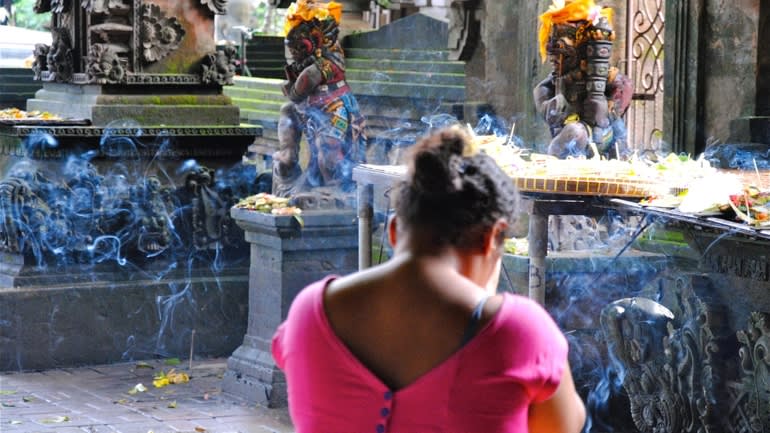 A woman makes offerings at a Hindu temple in Bali. (Photo by Ian Neubauer)

"Alila Seminyak cannot be held responsible for ... failure of the services provided by a Balinese rain stopper," the hotel stresses on its website.

Agung Giri, a 49-year-old rain stopper with a decade's experience (including a $1,000 fee for rain-stopping at a rock concert) works by the same caveat. "I'm successful 99% of the time," he says. "I always try my best, but if it is God's will that it rains, I can't push anything. There are no guarantees."

There is no data to substantiate the rain stoppers' claims of success. Nor is it possible to explain stories about rain falling close to rain-stopped venues (but not on them), or how shamans allegedly stopped the monsoon rains during the 20-day shooting schedule of the hit film "Eat, Pray, Love" in 2009. 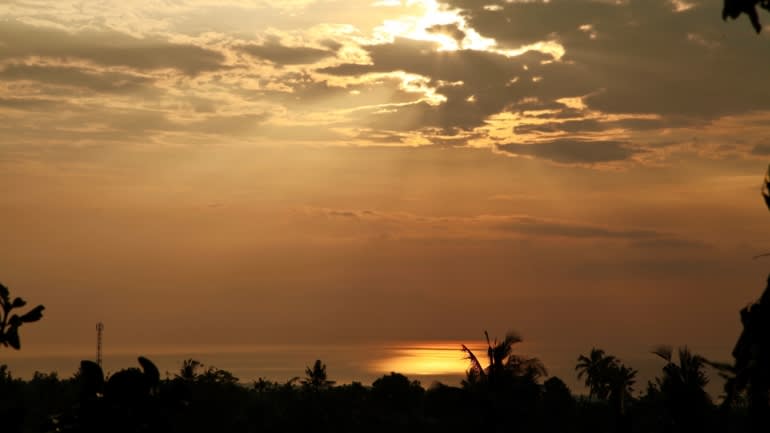 Rain clouds gather over the coast of Bali. (Photo by Ian Neubauer)

Yet anecdotal evidence suggests that rain stoppers are not as successful as they claim. For example, rain bucketed down at a recent gala event on the grounds of a major hotel -- even though a rain stopper had been hired to keep things dry. "We use them for every single event during the rainy season, but our experience is that they are not always successful," a hotel official said. "From a sales perspective, we don't want the public to know that rain stoppers actually don't work very well."

This kind of skepticism is largely ignored in Bali, a Hindu-majority island where belief in the supernatural is nearly universal -- as it is across much of Southeast Asia. "They have very strong beliefs in the power of shamans, priests and spiritual healers because most Balinese participate in rituals all the time," said Janet DeNeefe, the Australian-born founder of the Ubud Writers & Readers Festival. "It's part of their knowledge system and it isn't going to change," said DeNeefe, author of numerous books on Balinese culture and cuisine.

Many expatriates living in Bali also attach weight to local superstitions -- despite hailing from Western cultures where such beliefs are regarded as nonsense, according to DeNeefe. A procession-type ceremony in Ubud, the spiritual capital of Bali. (Photo by Ian Neubauer)

"It's easy to go down that path and start thinking there might be more to the world than we can see with our eyes when you're living here because you're surrounded by rituals and spirituality every day," she said. "More than that, people see things in Bali they can't explain. I was once at a ceremony where I could feel it was about to rain, the air was wet and it was raining behind us, but not a single drop fell on us. As the procession moved between villages the rain followed, but again, not a single drop."

Rain stoppers are not the first genre of Balinese spiritualists to harness entrepreneurial know-how while brushing off skeptics to forge successful businesses. The late Ketut Liyar, a fortuneteller who became a celebrity after being featured in the novel "Eat, Pray, Love" (on which the film was based) was a renowned huckster who got rich selling love spells to starry-eyed tourists.

"Many of you had palm readings from Ketut over the years, and you know he was kind of full of bullshit, right?" wrote Elizabeth Gilbert, the author of "Eat, Pray, Love," when Liyar died in 2016. "[The] guy was so blind, he couldn't even see your hand, much less read its detailed lines." A demon face mask used in a traditional dance in Bali. (Photo by Ian Neubauer)

Ida Resi Alit, a Hindu high priestess in Bali, claims that she stopped breathing for six hours after falling into a trance during a ceremony. Yet locals and foreigners line up for hours at the priestess' home near Ubud every day to receive her blessings.

"With each visit, I could feel internally how I was transforming," said Uday Rao, general manager of the Four Seasons Resort Bali at Jimbaran Bay. "It was not about religion or the belief in a higher power, but the hope she could help me find inner peace."

Bali's rainmakers and those who swear by their services drink from the same cup. Whether they succeed or fail to stave off rain on a particular day is immaterial. It is the thought -- or belief -- that counts.

"I always say to my clients if it works, I will not be too proud, and if it fails, don't be too sad," said Astawa. "But until now, no failures."