GILGIT, Pakistan -- For decades, the attractions of Pakistan's stunning terrain and scenic sites have been overshadowed by a bigger consideration for international tourists: fear of terrorism. Although attacks have been limited to a handful of tense areas that are mostly off-limits to tourists, security concerns have plagued the country's struggling travel industry.

Even so, tourism to Pakistan has not only survived but has recently thrived, with gradual improvement in security and efforts by dedicated travel agencies in the country. Their initiatives have begun to pay off. The British Backpacker Society in January ranked Pakistan the best adventure travel destination in the world, "with mountain scenery that is beyond anyone's wildest imagination."

Indeed, despite some high-profile terrorist attacks in major cities, the annual inflow of international tourists tripled to 1.75 million from 2013 to 2016, according to Pakistan's Tourism Development Corp., while the number of domestic travelers increased from 30 million to 38.3 million in the same period. In 2017, travel and tourism accounted for 7.4% of Pakistan's gross domestic product, and is forecast to rise by 5.8% in 2018, according to the London-based World Travel and Tourism Council.

The election victory in late July of former star cricketer Imran Khan has raised further hopes in Pakistan's beleaguered tourism industry, that promises of reform and new stability could help reshape negative perceptions of the country.

Alex Reynolds, a blogger behind Lost with Purpose, a popular adventure travel site, is among those promoting Pakistan as a destination. "It's not a land without issues, but in recent years, there have been no serious incidents in any of its popular tourist destinations, and Pakistan is just as safe as its more accepted neighbor India," she said. A view of the Passu cones, possibly the most stunning geological formation in the Hunza valley (Photo by Kit Yeng Chan)

"Both domestic and foreign tourism are on the rise: These days, Pakistan is a well-kept adventure tourism secret, but with the improved security situation and increase in popularity amongst backpackers, I can't guarantee the same will be true in a few years."

While recent terrorist incidents have focused on urban areas, in 2013, nine foreign mountaineers were shot dead by the Pakistan Taliban at a high altitude base camp on Nanga Parbat mountain in Gilgit-Baltistan, the country's northern region bordering China, which boasts some of the world's highest mountains, most pristine Himalayan valleys, and some of Asia's most hospitable people. But the area is now back in the sites of intrepid international travelers.

"Believe it or not, before 9/11 [terrorist attacks in America] and the terrorist threat, most hotels in the northern valley of Hunza only catered to foreigners," said Lahore-born Syed Hamza Mobeen, one of the two owners of Karakoram Bikers, an independent tour operator that specializes in motorcycle tours in Gilgit-Baltistan.

"Until now, hotels have made up for the dearth of foreign arrivals by catering to the increasing number of local tourists from Pakistan's central and southern regions, who come to the north to escape the heat of the plains and see some of the best scenery our country has to offer," he told the Nikkei Asian Review. Mobeen, a native of Lahore in the country's west, was mesmerized by Gilgit-Baltistan's mountains on a pioneering backpacking trip to the Hunza valley in 2012 . Over the next few years he motorcycled through the rest of the region with friends, eventually inviting his Australian wife Liz Norman, another biker he befriended via the internet, to Pakistan.

"At first I told him: 'Are you crazy, I am not going'," said Norman, now co-owner of Karakoram Bikers. "But in the end, I decided to give it a try. And as we sat spellbound under the Passu Cones in Hunza valley, waiting to proceed to the Khunjerab pass, we started thinking that we had to do something to share that incredible beauty with the world."

In the past couple of years, Karakoram Bikers has helped more than 170 foreigners to travel to Pakistan. Once a hot destination on the "hippy trail" of the 1970s -- an overland route taken by European drifters traveling between London, India and Nepal -- Pakistan is now more difficult to visit for independent travelers.

Because of security concerns, visas can only be obtained in an applicant's home country; an invitation letter supported by a Pakistani-based tour operator is usually required. All applications are closely monitored by the Inter-Services Intelligence, Pakistan's powerful foreign intelligence agency, and tour companies must act as guarantors for each visitor they handle. 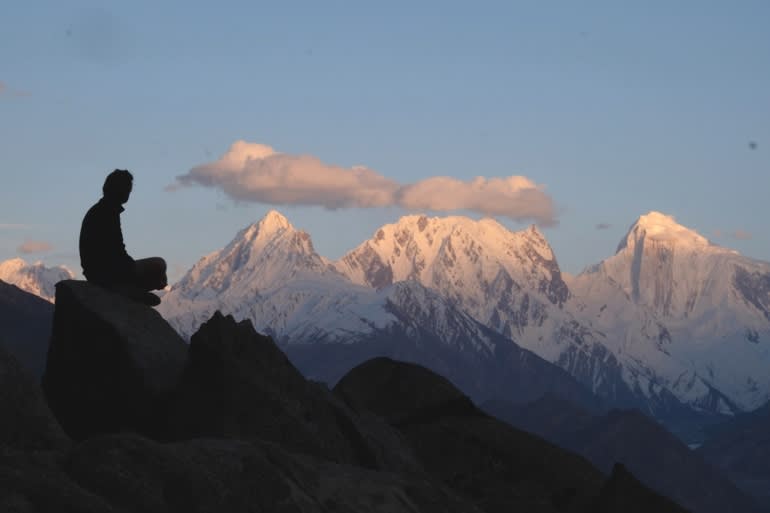 One of the few tourists that make it to Karimabad enjoys a stunning sunset from Eagle's Nest. (Photo by Kit Yeng Chan)

"There is enormous potential for tourism in Pakistan. The problem is the red tape that doesn't allow getting things done quickly, as you never know what's going to happen day by day," said Norman. "But I think that the authorities are also becoming more aware of what Karakoram Bikers is doing. They see that we bring foreigners here, that they travel on bikes and that the security is taken care of. Hopefully things will continue being more relaxed."

"Hosting foreign tourists is a responsibility we can't take lightly, but we have to do it if we wish to change people's perceptions of our country," Mobeen added. "If tourists come and experience Pakistan's beauty, safety and hospitality, they will help us share the message to the world."

"First, the foreigners who have already visited Pakistan go home and share their photos and videos on social media, spreading the voice about the beauty and safety of the country," he said. "Second, many local tour companies are promoting Pakistan very hard by visiting tourism expos and collaborating with other tour operators in foreign countries." Posters at Lahore's Allama Iqbal airport explain that foreign nationals can overstay a tourist visa for up to 14 days without a penalty. (Photo by Kit Yeng Chan).

However, Shah said it remains difficult to shake off Pakistan's dangerous reputation. "Since 2013 the country has become much more stable. We really make good use of travelers' blogs and social media posts by showing them to our prospective customers. We record feedback videos of travelers who have already visited Pakistan ... and yet, convincing people is still quite difficult," he said.

As recently as mid-July, terrorist attacks killed an estimated 150 people in the western cities of Peshawar and Quetta near the Afghan border, including senior politician Haroon Bilour of the Awami National Party.

But these may prove to be isolated cases, as the country was then gearing up for the July 25 national poll.

Tourism has been vital in reconnecting Pakistan's troubled areas with the outside world. One such location is the Swat Valley, a fabled destination in the foothills of the Hindu Kush range that has been dubbed "the Switzerland of Asia" by international mountaineers. Ruled by the Taliban between 2007 and 2009, it is still heavily patrolled by the Pakistani army. 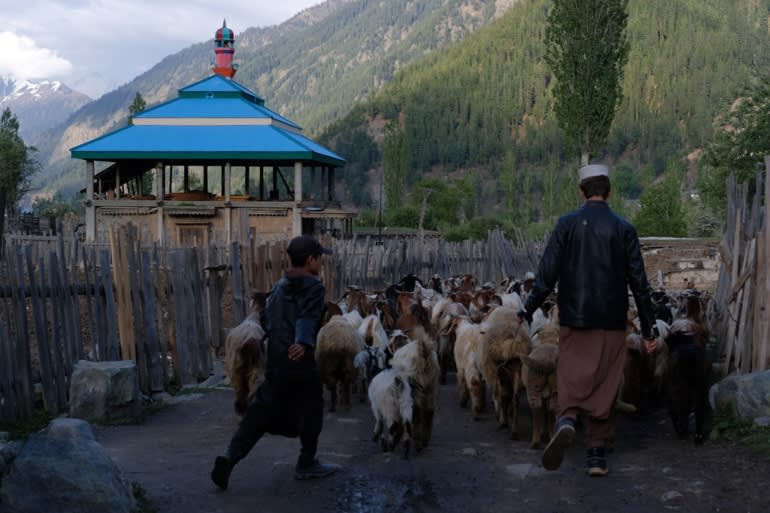 Locals herd goats in the Swat Valley, now ready to welcome visitors again after the Taliban occupation of a few years ago. (Photo by Kit Yeng Chan).

Ihsan Khan, a university student and co-founder of Swat Valley Backpackers, an online-based group, said the area is now safe to visit. "We are on a mission to open up our region and country through sustainable tourism, and are keen to invite anybody, no matter their religion, gender or nationality, to discover adventure in Swat Valley. We believe in positive change through travel and education," said Khan.

He also stressed that the numbers of foreign visitors to the valley has been increasing steadily since 2017. "In Swat, most of the people's livelihood is associated with the tourism and transport sectors. An increase in the number of tourists would also raise the demand for such services, and many local people would benefit," Khan said.

Perhaps as a result of the increasing flows of visitors, tourism bureaucracy is beginning to ease. The immigration branch of Pakistan's Federal Investigation Agency is currently telling foreign nationals at Islamabad and Lahore airports that tourist visas can now be extended without charges or other problems for up to 14 days. Additional stays of between 15 days and one month incur a $50 fee, paid at the immigration counter upon leaving the country.

Since January, nationals of 24 countries including China, the U.K., the U.S., Finland, Italy, France and Malaysia have been entitled to 30-day tourist visas on arrival, provided their trip is supported by a registered Pakistani tour operator. A business visa-on-arrival scheme is also in place for citizens of 68 countries. Such moves have lent momentum to perceptions that Pakistan could see the dawn of a new, more confident era.