Social distancing brings insurgency against beer duopoly to a head 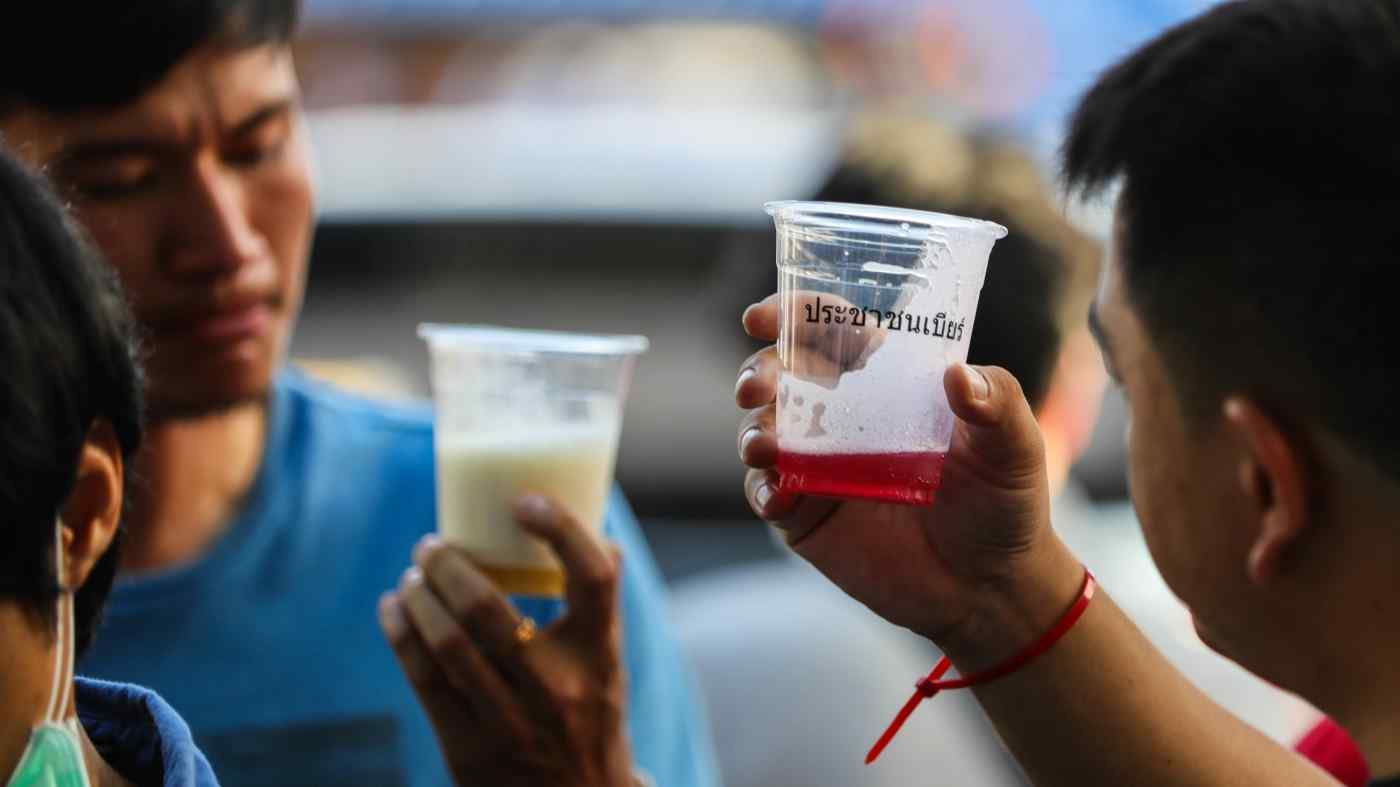 BANGKOK -- Down a quiet street in Nonthaburi, just outside Bangkok, a Thai couple in their 30s turned the self-isolation imposed by COVID-19 social distancing rules into a cocktail of opportunity, spending their idle hours creating new craft beers.

On a weekend afternoon, they were midway into their latest brew in an open kitchen area, at the back of their house. Their makeshift microbrewery included three large silver containers, normally used to cook noodles, in which they were preparing a variety of pale ales. Inside, a tall fridge was packed with beers made earlier.

But brewing like this carries risks -- both from the lockdown rules imposed by the government to contain the coronavirus pandemic, and from long-standing legal controls designed to protect Thailand's two big brewing groups from upstart competition.

The lockdown rules banned both the sale of alcohol and parties in private settings, where alcohol might be drunk through most of April into May. The ban was recently relaxed but still restricts on-site sales of alcohol at restaurants and bars. But craft brewing was already difficult due to a clutch of laws, regulations and taxes that bar producers from selling their beer without a brewing license. Such licenses are available only to companies with paid-up capital of more than 10 million baht ($313,000) that make at least 10 million liters of beer a year.

This puts the backyard brewers such as the ones in Nonthaburi in breach of the law, and explains why both wished to hide behind the safety of their nicknames. Yet both see craft brewing as a way of challenging Thailand's protected business establishment, as well as an increasingly popular lifestyle choice. Som, a 33-year-old website editor for a media company in Bangkok, said that a Facebook page she maintains for this "craft beer society" is as lively as before the pandemic struck. "There are three to four new posts per day," she said. "Those who post photos of brewing craft beer on FB pages, for the public to see, know it is illegal."

Benz, a 36-year old barista in a Bangkok coffee shop, said the spirit of defiance involved in brewing distinct beers at home is spreading quickly as a result of the coronavirus shutdown. "Brewing craft beer is just a part of this society that helps us to connect with one another and do something together," he said. "There are two types of brewers now -- the ones who were always doing it and the new people joining, wanting to learn to brew, after the curfew forced people to stay at home."

Thailand's 180 billion baht alcohol industry has long been dominated by Boon Rawd Brewery, which produces Singha and Leo beers, and Thai Beverage, which makes the Chang brand. Beer accounts for 72% of the country's alcohol market, and the two companies have a 93% share of the beer market by volume, according to the Bank of Ayudhya's beverage industry outlook for 2019-2021. Beer on tap at a bar near Bangkok that sells Thai craft brews. (Akira Kodaka)

But plenty of small brewers seem willing to risk breaking the law to challenge them. In early March, more than 300 showed up for a "People's Beer" festival outside a small shopping complex in a northern Bangkok suburb, even though the location was kept secret until the day of the event. Craft beer enthusiasts -- who ranged from hip-looking youths in their 20s to grey-haired older enthusiasts -- had to buy special tickets to enter a cordoned-off area in which microbrewery products were being sold in defiance of the law.

Analysts say that this whiff of a subversive lifestyle has added to the mystique among Thais drawn to the microbrewery culture. "There is a romance, a feeling of excitement among the Thais to produce beer at home as if it is an underground activity to challenge the law," said Charoen Charoenchai, a food science and technology specialist at the Rajamangala University of Technology Thanyaburi, in Pathumthani, north of Bangkok.

Warunee Arsa had driven from her home in Chonburi, southeast of Bangkok, to share three varieties of craft beer she had brewed for the festival. One of the brews, housed in an 18-liter container, had a hint of orange. "It is not just about liquor that brings us here, but there is both an art and a science in making beers with local flavors," said Warunee, 42, who works as a manager in a Japanese-owned auto-parts company. 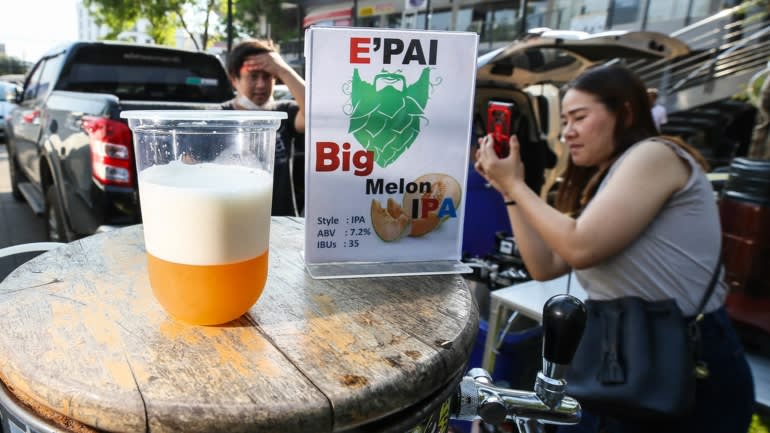 Fruit-infused beers, such as this melon IPA, are not uncommon among Thai craft brewers. (Akira Kodaka)

Sumalee Tangcharoen, who is not a brewer, went to the festival to quench her thirst for craft beers. "Each craft beer has its own taste and story and that makes it special," she said between sips of a boutique beer that had been infused with mango. "We have become beer groupies and we exchange stories on social media about the craft beers we drink with our friends."

The buzz about craft beers with a Thai twist has been loudest on Koh Kret, a small island popular with local and foreign tourists in the stretch of the Chao Phraya River that flows through northern Bangkok. This is where Wichit Saiklao, credited by many as the driving force behind the spread of microbreweries, holds court in Chit Beer, a craft beer pub that is usually packed with customers even though it is breaking the law.

"There are more Thais buying into my philosophy that if you want a good thing in your life, like a real, authentic craft beer, then you should brew it," said Wichit, whose fines for illegal sales amounted to 50,000 baht in 2019. "Today we have 20,000 Thais brewing beer across the country, from nothing seven years ago." Col. Wichit Saikao at Chit Beer, his craft beer pub on an island on the Chao Phraya River in Bangkok. (Akira kodaka)

U.S.-educated Wichit, 48, is a colonel in the Thai army and teaches electrical engineering at the prestigious Chulachomklao Royal Military Academy, whose alumni include all of the country's military leaders and generals who rose to be prime ministers. That makes him an unlikely rebel in a country where the army is regarded as defender of the conservative social order.

"I have had trouble with the excise department eight times and have had to pay fines, but I will not stop," he said. "I am not going to waste my time [trying] to change the law, but I'm going to change people to brew, to stand up and to feel empowered."

This is a mantra that resonates with the young Thais running a growing number of craft beer bars in affluent neighborhoods and at busy intersections across Bangkok. But these bars are legal -- they sell craft beers produced in Thai-owned microbreweries in countries such as Cambodia, Laos, Myanmar, Vietnam and even Australia. Chit Beer is usually packed with customers even though it is breaking the law with its craft-beer offerings. (Akira Kodaka)

"This is one way to be part of Thailand's craft beer society, because it is less risky than producing it underground and getting fined by the police," said Jonas Kritsada, a partner in a craft beer bar that brews an India pale ale beer in Vietnam and ships it to Thailand. "But our craft beers are more expensive because we have to pay high taxes to import the Thai-made beer back into Thailand in addition to the production costs. It is so frustrating."

Opposition to craft brewing remains entrenched in the Thai political establishment. But there is some hope of change. Just before the coronavirus brought public life in Thailand to a standstill, a new political party with a wide following among younger people revealed plans to reform the laws that protect the beer barons.

"We need to amend the law to allow small businesses to emerge and generate more economic value from brewing beers," said Pita Limjaroenrat, an opposition parliamentarian and leader of the Move Forward Party. "We are losing the opportunity to gain wisdom from our own culture."

Som's eyes widened at the prospect of such a dramatic social change. "It should be our right to brew craft beer and sell it outside just like we cook food at home and sell it," she said. "Thai microbreweries are a people's beer with different flavors -- just like Thai cuisine."