MAE RIM, Thailand -- In the lush countryside of Mae Rim, a 30-minute drive north of Chiang Mai, Thailand's second-biggest city, lies a hamlet with a sign at its entrance reading "Karen Village." A second sign on a bamboo ticket booth displays an entry fee: 500 baht ($15.90) per visitor.

This is one of several privately owned ethnic villages in northern Thailand that are home to migrants from the Karenni or Red Karen hill tribe in Myanmar's Kayah State, formerly known as Karenni State. Until March, the village was a popular tourist attraction, with visitors queuing to see the elongated, brass-ringed necks of the Red Karen women, made famous since they were first pictured in monochrome in 1930 by the French photographer Albert Harlingue.

Often, the women would chat with tourists as they hawked souvenirs. But the COVID-19 pandemic has put an end to that. On a visit in late July, the village was almost empty. At the end of the road, a lonely long-necked woman called Mu Ei was sitting with her baby, boiling banana leaves in a blackened pot on a wood stove. The leaves would later be used to form a container for cooking rice.

Mu Ei, 32, has lived in this village for seven years with her husband and two daughters, earning 1,500 baht a month from the owner, who keeps the entrance fees paid by tourists, and up to 700 baht a day by selling souvenirs to visitors. Now, however, tourism income has dried up because of travel restrictions imposed by the Thai government to contain the pandemic. Of the 20 families who once lived in the village, only three were still there.

"My husband has been working for a month in a construction site near the village, making 300 baht a day, " said Mu Ei. "I don't know how long it will last [but] we have no other income because tourists are not coming." Mu Ei said the construction work was intermittent; her husband had worked only three days that week. 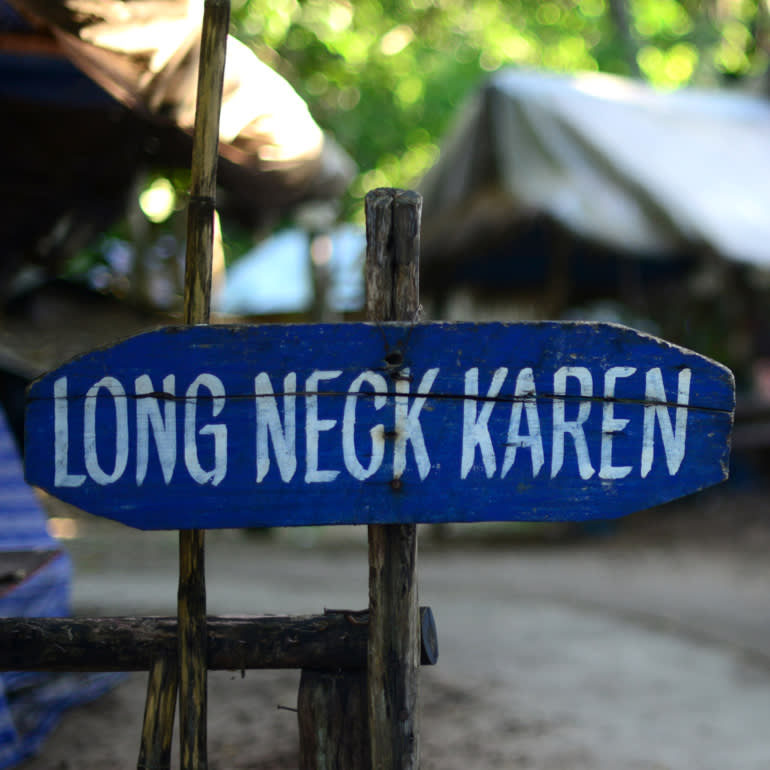 Top: Mae Rim villager Mu Ei and her 2-year-old daughter, Nite. “Even though tourists do not like this place sometimes," she says, "I am very happy to stay and live here.” Middle, Bottom: Signs at the entrance to the village. The ticket office remains empty these days, as no visitors are expected. (Vincenzo Floramo)

Official records of the numbers of Red Karen migrants in Thailand are unavailable, but academic estimates suggest that up to 600 live in three community camps in Mae Hong Son Province and the small tourist-oriented villages north of Chiang Mai. There are no official numbers for the Red Karen population in Myanmar, but academic researchers have estimated there are about 60,000.

Many of those in Thailand crossed the border in the 1980s and 1990s in search of refuge from decades of armed conflict in Myanmar, where armed Karen groups have been fighting for over six decades in Kayah State and neighboring Kayin State, formerly known as Karen State, which is also home to a large Karen population.

The migrants are not recognized as refugees by the Thai authorities, and are mostly unable to work legally or live elsewhere in Thailand. But the tourism potential of the "long-necked women" was quickly discovered, as visitors to the villages marveled at the brass rings or coils that encircle the women's abnormally long necks, which were originally seen as a sign of beauty. 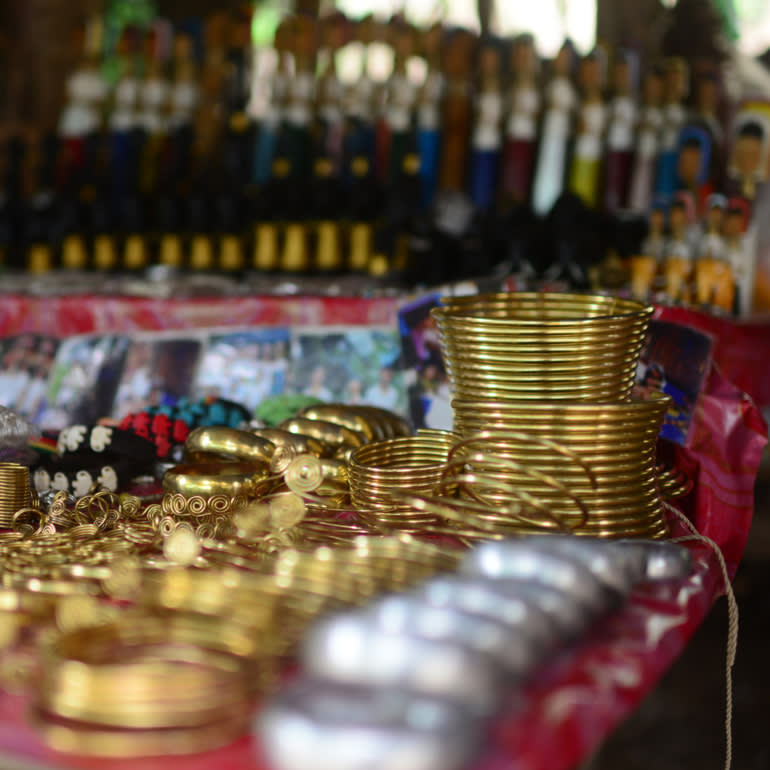 Top: Mu Ei's rings helped bring in important income before the pandemic. Her husband has started working at a nearby construction site to help ends meet. Middle: Some of the souvenirs sold by the women are made by their husbands, but most are purchased at the big night bazaar in Chiang Mai. Bottom: Mae Hong, 41, stands outside her hut in Mae Rim. (Vincenzo Floramo)

The income from visitors helped to provide a living for the migrants, but the restrictions on their movement and employment opportunities have prompted stinging international criticism of the tourist villages, which in 2008 were described by the United Nations High Commissioner for Refugees, the U.N. refugee agency, as "human zoos."

The economic impact on the villagers has been largely ignored in the wake of the pandemic, even though Thailand has been spared the worst impact of COVID-19, with relatively few deaths since a state of emergency was declared by the government on March 26. Deprived of their incomes, and lacking employment opportunities, many migrants decided to go back to Myanmar, where farm work is available.

On Aug. 5, I returned to Mae Rim to find that five families had moved into the village, though only because Baan Tong Luang, the tourist village where they had lived, had been closed by the owner because of the absence of tourist income. Long-necked women living in Baan Tong Luang had been receiving a monthly salary from the owner of 5,000 baht, in addition to income from selling handmade souvenirs. 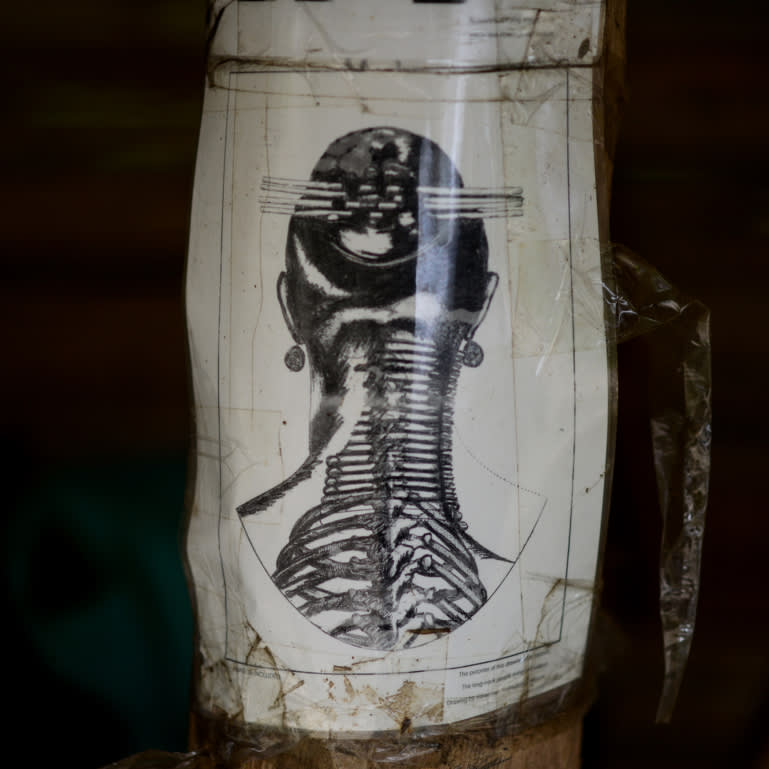 Top: Stalls once bustling with foreign tourists are now deserted. Middle: An illustration showing the effects of the rings on the skeleton. The rings do not elongate the neck; rather, they press down on the chest and clavicle bones, creating the illusion of a long neck. Bottom: Ma Radin, 20, left Myanmar with her brother and sister-in-law when she was 10. Concerns about the pandemic prompted her relatives to return to Myanmar, but she has decided to stay behind, saying she wants to continue working in tourism. (Vincenzo Floramo)

Mae Plee, 44, said Baan Tong Luang had been a relatively successful village, with a kindergarten and a foreign volunteer who was teaching English to the villagers. But that ended with the pandemic. When I met her she had been living in Mae Rim for a week in a hut occupied by her brother before he left to find work in Myanmar.

"Just before the lockdown, my husband decided to go back with our children to Myanmar because of the pandemic, [and] at Baan Tong Luang they told us that if we were leaving we [could not] come back so I decided to stay all by myself," she said. "Many friends from Myanmar request [from] me information about the situation in Thailand because they all would like to come back to work here."

Ma Radin, 20, had also arrived at Mae Rim a few days earlier. Sitting on the steps of her sister's bamboo hut, she explained in fluent English why she was not wearing the brass neck rings. "If there is no tourist around I prefer not to wear the brass coil, they are too heavy," she said, adding that she might wear the coil again if she was forced to return to Myanmar to look for work, but that she would prefer to stay in Thailand and return to wearing it for the benefit of tourists.

"Sometimes I hear the comment about "human zoos" by the tourists, but I don't care and I do not feel hurt," she said. "This is my work, and I like it, and certainly I would not change it with another job."