Philippine children are left behind by poor distance learning 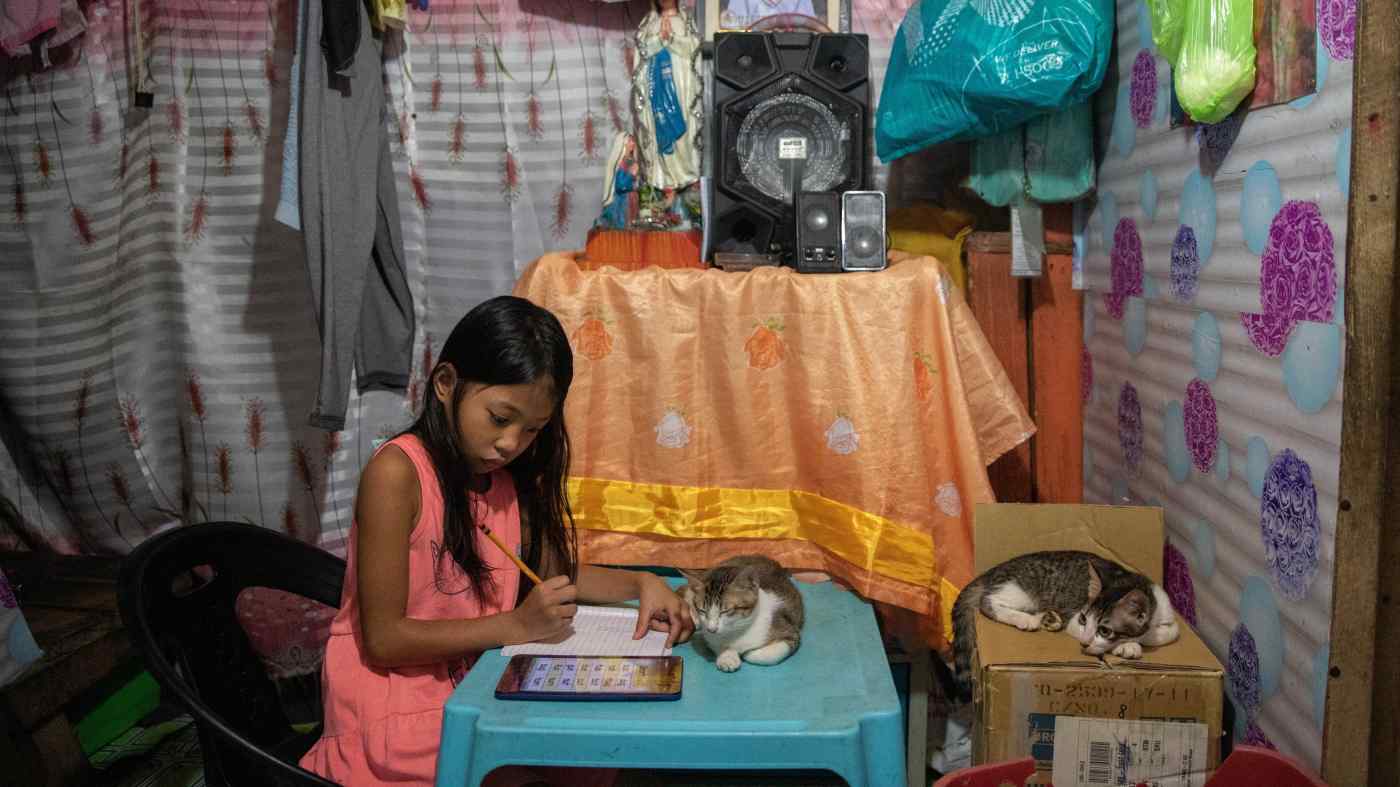 A girl works on a school assignment at home in Manila on Jan. 6 as schools remained closed due to the COVID-19 outbreak.   © Reuters
MICHAEL BELTRAN, Contributing writerAugust 9, 2021 13:03 JST | Philippines
CopyCopied

Since the COVID-19 pandemic hit, distance learning has become the norm for schools and universities, as ordered by the Department of Education (DepEd). Students get lessons through either online classes or study modules that they pick up at designated drop-off points. The modules have been preferred by families without access to gadgets or a stable internet connection.

Aneste Faeldin, a mother of two, runs a small store at the front of the shack she calls home in the city of Quezon.

She and her husband opted for their eldest daughter to enter third grade via modular learning, since they have no Wi-Fi and only one smartphone for the family of four. For the first few weeks in October 2020, Faeldin went to her daughter's school every other day to pick up study modules.

But the modules soon stopped being printed. She had to resort to paying for mobile data to get the lessons through Facebook Messenger. Her husband works as a plumber while she maintains their modest store, meaning their income is fairly irregular. They estimate the lessons have added 500 pesos ($10) to their expenses every week. Worse she said, her daughter has problems focusing on her studies at home, which is less than 15 sq. meters and has barely a table to work on. In second grade she received high honors, but in the last school year she garnered none. Philippine President Rodrigo Duterte has approved Sept. 13 -- three months later than usual -- for the start of the next academic year.   © Reuters

"I don't understand her lessons. I have to consult with her teachers, and the internet is poor. I can't explain everything. I'm not blaming the teachers, I blame the messed-up system and inadequate pandemic response," Faeldin told Nikkei Asia.

In March the coalition Movement for Safe, Equitable, Quality, and Relevant Education (SEQuRe) conducted a nationwide survey of primary and secondary public schools to uncover the extent of troubles with distance learning. While problems with internet access and getting modules have bogged down schooling for low-income households, the unreliability of online classes is a thorn in the side for everyone.

About 53% of students surveyed were not sure if they could learn the competencies set by DepEd for their grade level under distance learning, and only 7 in 10 were confident of finishing the school year.

"The majority of our students come from low-income households, or those most hit in the economic recession brought about by the pandemic. Some belong in homes that house two to three families, with only one or two gadgets shared by multiple learners," explained Raymond Basilio, secretary-general of the Alliance of Concerned Teachers. The government is essentially forcing these families to choose between putting food on the table and ensuring their children's education as they reel from the various effects of a bungled pandemic handling," he added.

The Asian Development Bank estimates that students in the Philippines face potential earnings losses of up to $155 per year, 4.5% of baseline average earnings, because of the pandemic schooling situation. The longer schools are not operational and students are not in class, the greater the economic burden on them will be later in life.

While the DepEd got a 6.5% boost in its budget for 2021, the Alliance believes that resources are being misallocated and that glaring problems with distance learning have been overlooked. "Teachers are provided with just 1,000 pesos' internet allowance each in this year's budget, lumped together with chalk allowance," Basilio said. "Modular learning became increasingly difficult as the school year went on because of the lack of funding to print materials. Teachers are shouldering and thus stressing over the costs of paper, ink, printers, staplers and other supplies. And because of unjustly strict quarantine measures, many educators have to visit their student's homes one by one to hand out their lessons."

"I start and end my day staring at a laptop," teacher Ana Bernardo told Nikkei Asia. She handles grade 10 Filipino classes at Sta. Lucia High School while serving as the vice chairperson of the Quezon City Public School Teachers Association. She has 60 students per class and is lucky if even half can attend. Her first class begins at 6 a.m. and her last ends at 12:30 in the afternoon.

After that, Bernardo prepares lessons for the following day in video or PowerPoint format, fills out the mandatory monitoring papers required by the DepEd and monitors her students' activity by consulting parents online or visiting their homes. Her work usually doesn't end until 1 a.m. "I feel like a call center agent, and the stress this brings me is incomparable," she said, "though other teachers have it worse than me. There is a big adjustment for those relatively unfamiliar with information technology. Sometimes just getting into the Google classroom already causes a lot of problems." 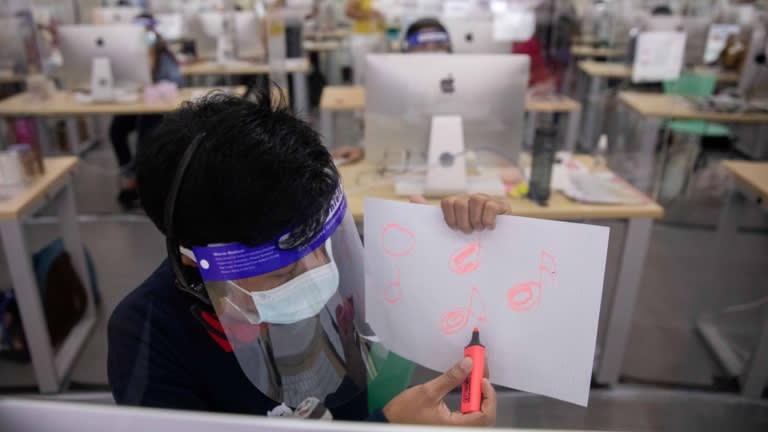 A teacher explains a lesson during a video call with a student through a hotline program in the Metro Manila city of Taguig on Oct. 7, 2020.   © Reuters

Rosemarie De Vera, who teaches grades 9 and 10 at Colegio de Sta. Monica de Angat in Bulacan Province, rues the limitations and the added effort they extract, only to produce afflicted learning in students. Like Bernardo, she says deadlines are always piling up not just for her, but for the students as well.

"Only about a quarter of the class can submit their requirements on time. Some will give it to me even after the end of the school year. It's hard for everyone. So my work piles up. I keep asking myself, 'Are they really the ones doing this?,' 'Are they learning?,' 'Am I being an effective teacher?'"

Duterte said in May that there would be no return to classes for unvaccinated teachers and students. He said that meanwhile kids should just "play" and that the country would have to cope without producing a future batch of doctors and engineers for now.

This is all empty talk, says Bernardo. She said the president likes to bark a big game but most schools aren't even prepared for the basics, even after more than a year of the pandemic. Any sliver of normal schooling will have to wait as the country remains stagnant while virus-proofing the education sector.

"A limited, safe and gradual return to face-to-face classes is possible," she said. "But we have to undertake certain measures, like prepping health facilities. Public schools don't even have enough hand-washing areas. In our school, not all floors have running water. Not all schools have functioning clinics, as well."