For 40 years, the Silpa portrait studio in the southern Thai town of Songkhla was the go-to shop for a sitting whenever a local official got promoted. The owners, Silpa and Nuan-Ampai Chaernsawat, both in their 80s, retired a few years ago but keep their storefront open as a kind of town museum. (Photo by Runchakorn Janjumpa, courtesy of CEA)
BRIAN MERTENS, Contributing writerJanuary 27, 2021 08:00 JST | Thailand
CopyCopied

SONGKHLA, Thailand -- In the world of tourism, the race to the bottom begins with smiles. International travelers, longing for a vanishing past, fix on some pristine island or neglected old town. Local people vend a bit of hospitality and prosper quietly. For a charmed while, change moves at walking pace.

But what if a community could protect itself against this fate? What if people banded together to prevent overtourism and overdevelopment? With leadership, laws and subsidies, they might retain ownership of their own culture and identity. Their shared past could ensure a better future for all.

This was the unspoken proposition of "Portrait of Songkhla," a group of seven exhibitions of photographs of the diverse people, architecture, streetscapes and everyday life in the southern Thai port town once known as Singgora, an ancient stop on the maritime trade routes that included kindred cities such as Phuket, Malacca and Penang. One in four persons in Songkhla is Muslim, and many worship at Banbon Mosque, established in 1847 and built in the style of a Buddhist chapel. Its revered imam, Haji Somsak Wanlabeh, center, opens the doors to all. (Photo by Kanok Sulaiman, courtesy of CEA)

"They were all so happy. Some of these people had a shop for four generations but no one ever mentioned them," says Rangsi Ratanaprakarn, an 86-year old retired civil engineer and president of the Songkhla Heritage Trust. "When we get to know more people we can talk together and unite," he adds. "This show is a way that our people can be proud of what they have and what they are doing."

The trust hosted the core exhibition at an old rice mill known as Hub Ho Hin (Unity Harmony Prosperity, in Hokkien Chinese) that was built by Rangsi's grandfather in 1914. This show featured 76 portraits, each displayed with a personal history, such as that of the Ratanachai family, proprietors of a thriving Singer sewing machine shop founded by their immigrant Chinese grandfather a century ago.

Others included Jaras Chanpromrath, a teacher who has created a nationally recognized archive of books, magazines, photographs and other documents recording the town's history, and the Reawthammarat family's watch and clock shop, untouched by digital disruption. Other exhibition sites hosted street photographs shot on film by kids, and portraits of local women, including three transgender women. Top: Vigorous at 86, Rangsi Ratanaprakarn leads the Songkhla Heritage Trust, housed at the red rice mill built by his grandfather in 1914. Bottom: The Ratanachai family has been selling Singer sewing machines and other appliances for 100 years. (Photos by Santi Setsin, courtesy of CEA)

Pride has served Songkhla's heritage well, but so has luck. Situated on the Gulf of Thailand, it was for centuries a hub where merchant ships paused to wait out the seasonal shift in winds when plying trade routes between the Bay of Bengal and the South China Sea. Songkhla also fronts the Talay Sap, the nation's largest inland natural body of water, rich in fish and wildlife. In the 17th century, the port burgeoned under its Malay ruler, Sultan Suleiman, who built its fortifications and promoted free trade.

Conquered by Siam, the town became a 19th century southern capital of the kingdom, overseen by an ethnic Chinese governor. Its role as a regional administrative center continued in the 20th century. But in 1978, its rail link was closed, and subsequent large-scale development was diverted to the nearby metropolis of Hat Yai.

Most of the old town's land is owned by government agencies, the Crown Property Bureau, the military, universities, temples and mosques, which has helped to protect the area from developers. There is no five-star resort, and the public beach is truly public. "We say it's 'our beach,'" says Chanin Sakarin, who owns the gloriously retro Lake Inn Hotel and helps lead the Heritage Trust. The Reawthammarat family's watch shop has kept on ticking in these digital times. (Photo by Kanok Sulaiman, courtesy of CEA.)

Chanin says the end of rail services was followed by three decades of slow decline. Songkhla's economy shifted toward fishing, with some 500 trawlers. Crews of migrant fisherman moved in, but their notoriously harsh work conditions fostered a rowdy nightlife. Locals moved away and rented out their properties. Century-old houses were converted to farm birds' nests.

But by 2009, Rangsi and others had fallen back in love with their hometown after living away, and the heritage trust was set up, adopting international conservation guidelines to groom Songkhla to become a UNESCO World Heritage site. The group prompted officials to enact laws and regulations to control building height, facades, traffic and noise.

Aey, who returned to the town after years in New York and Bangkok, set up a small graphics and printing shop, buying two handsome old shophouses for his nonprofit gallery, a.e.y. space. 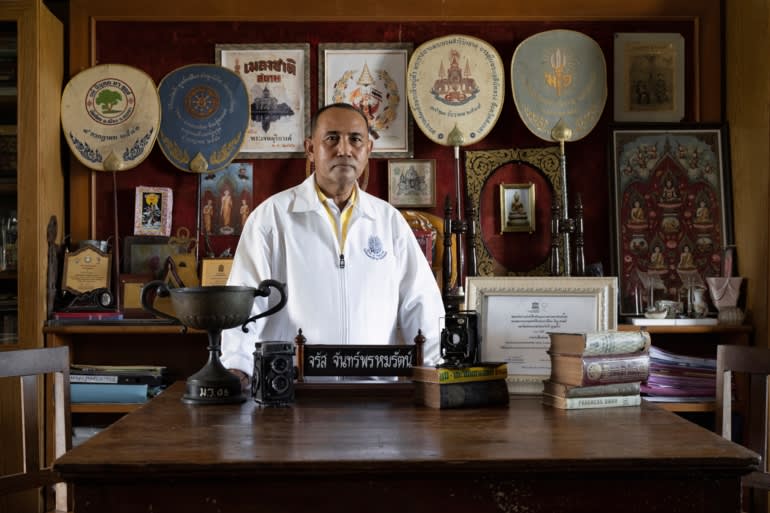 Teacher Jaras Chanpromrath developed an official town archive that is a treasure trove for heritage technicians as well as Thai and international researchers. (Photo by Gochanat Thongrueng, courtesy of CEA)

Renovating the buildings, Aey dug into their history and found that from the 1940s to the 1960s they had housed a supper club, where most of his parents' friends had celebrated their weddings. Thus inspired, he curated several acclaimed shows featuring vintage photographs of Songkhla people, which he gathered from friends, archives and old portrait studios.

"Architecture makes this town special, but the most important thing is the people and their way of living. It's so nice this exhibition could record their lives. In the years ahead, some of the older people may close their businesses or pass away," Aey says.

"Portrait of Songkhla" was initiated by Thailand's Creative Economy Agency, which has designated the town core an official Creative District and is converting an old fire station to house the first southern branch of its acclaimed resource library, the Thailand Creative & Design Center. Four photographers from Bangkok's School of Photography coached and co-curated the Songkhla photographers. 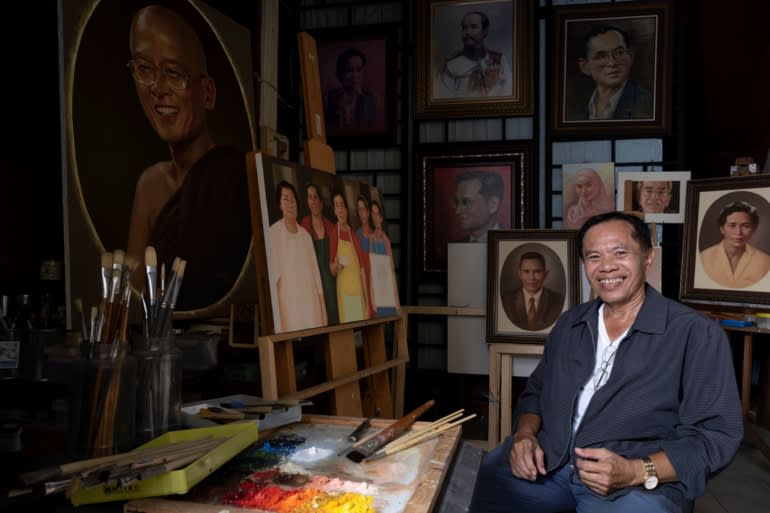 To be sure, the show's reverential style of portraiture was not entirely different from shots commissioned by Bangkok advertising agencies for slick corporate social responsibility campaigns. But the exhibition documented fact, conveying social purpose. And the golden era it captured so intimately was right at hand.

The exhibition also attracted visitors from across Thailand, boosting retail business by 30% during its duration. It filled local hotels, which had been hit by a ban on foreign tourists prompted by the coronavirus pandemic.

It remains to be seen whether this artistic injection of civic awareness will protect Songkhla's future. It is still legal to demolish old houses in the town, and it is usually cheaper to rebuild than to conserve. Rents and prices have risen up to fivefold in the past five years, and some poorer residents have been evicted.

Bigger businesses are also moving in. Local coffee shops will soon have to compete with a branch of Cafe Amazon, the nation's largest coffeehouse chain, which is owned by PTT, a state-owned energy, chemicals and mining conglomerate that is Thailand's largest company. There are also plans for a 2,600-hectare industrial zone on the nearby coast, despite a national outcry.

Nevertheless, local people say they have gained a renewed sense of town pride and optimism from the show, which also yielded valuable historical research. Songkhla's heritage movement was already reputed as Thailand's strongest, backed by local officials, eminent people and PTT. Looking ahead, Chanin says the town will find ways to keep its soul. After all, he adds, "creativity and heritage go together."