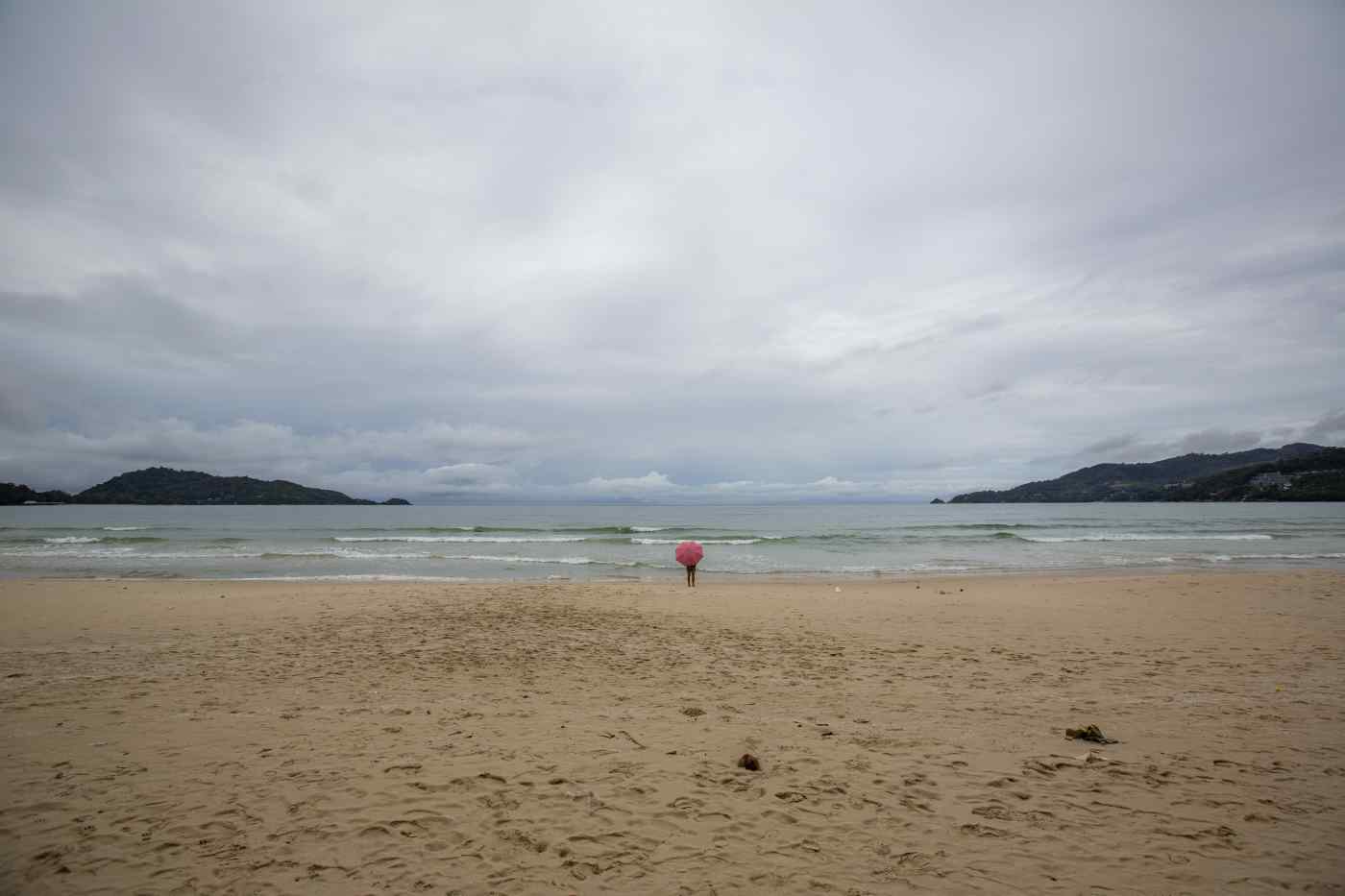 PHUKET, Thailand -- At this time of year, Phuket, Thailand's popular resort island, should be heaving with tourists. The end of the monsoon season heralds springlike weather that attracts foreign visitors ready to celebrate the year-end holiday season.

But 2020, of course, is different because of the COVID-19 pandemic. Phuket, Thailand's second most popular tourist destination after Bangkok, has the air of a ghost town. Many of the businesses in the Old Town area of Phuket Town, normally crowded with visitors, are shut, some permanently.

Patong Beach, on the island's west coast, is devoid of sun seekers; a few lifeguards stand watch over the empty surf. Rare sea turtles are reappearing on the empty beaches to nest. Nearby, normally raunchy go-go bars stand empty on deserted streets. Many of the island's 3,000 hotels are closed.

Phuket is at the epicenter of the collapse of Thailand's tourist industry, which accounts for about 15% of the nation's gross domestic product, following the imposition of tight restrictions on incoming visitors in early April to fight COVID-19. The World Bank forecasts that Thailand's economy could contract by 10.4% this year.

Normally, tourism provides 80% of Phuket's economy and employs more than 300,000 people, according to provincial Governor Narong Woonciew. In the first half of 2019, tourist revenue in Phuket exceeded 270 billion baht ($8.9 billion), according to the Tourism Authority of Thailand. But revenues will likely fall by 200 billion baht to 320 billion baht for 2020 as a whole, according to Bhummikitti Ruktaengam, president of the Phuket Tourist Association. "The impact from COVID-19 has already caused more damage to the economy than the (Christmas 2004) tsunami," which killed several hundred people on the island, said Phuket Vice Gov. Supoj Rotreuang.

With little sign of a recovery soon, Phuket's tourist industry is being forced to rethink its business model. Instead of focusing on mass tourism from overseas, more emphasis is being placed on attracting individual travelers and domestic holidaymakers, who normally make up only 30% of visitors to Phuket.

The first test of this strategy came at the end of October, when the island held the annual Phuket Vegetarian Festival, also known as the Nine Emperor Gods Festival, which launches its main tourism season. The festival also represented a test for the Thai government's Rao Tio Duay Gan (We Travel Together) subsidy program designed to encourage domestic tourism. Thai citizens and foreign residents are eligible for 40% discounts on rooms and domestic flights, plus cash coupons redeemable at local attractions and restaurants. 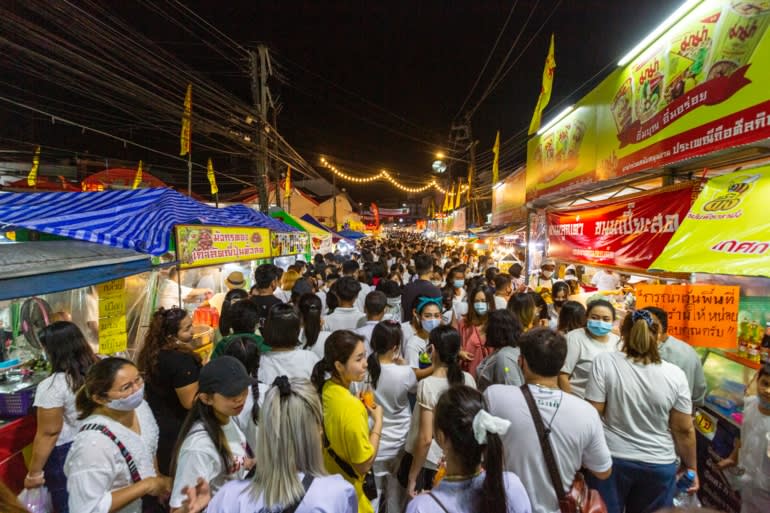 The Vegetarian Festival is Phuket's most famous cultural event, known both for its vegetarian dishes and for self-mutilation practiced by mah song (spirit mediums). It usually attracts large numbers of visitors to Phuket Town, the provincial capital. Local authorities initially planned to cancel the festival, but later reversed the decision because of the dire economic outlook. Still, the Phuket Tourist Association projected that revenues would amount to only 350 million baht, a far cry from the 2 billion baht earned in 2019.

No post-festival figures are yet available, but the strategy of focusing on domestic tourism appears to have met with some success. For the first time in months, some hotels in Phuket Town were fully booked for the festival. "We started getting a lot of reservations," said Maggie Nanthasit, 28, a hostel manager. "The hostel has been fully booked for a few days, which has not happened since December 2019. Between March and May we didn't have any guests because of COVID-19."

Large crowds sampled myriad vegetarian foods at a street market near the Jui Tui shrine, the most prominent Taoist temple in Phuket. "I thought that COVID-19 would make the festival small, but there are many Thai tourists here," said Phorn Punkui, a first-time visitor from Bangkok. Top: An assistant braces the head of a mah song spirit medium as his cheeks are pierced with needles by a ritualistic practitioner at the Lim Hu Tai Su Shrine on Oct. 20. Middle: A female mah song who has just entered a trance state stands inside one of the Jui Tui Shrine halls as her assistants accompany her on Oct. 23. Bottom: A woman lights incense inside the Bang Neow Shrine in Phuket’s Muang district on Oct. 24. (Photos by Adryel Talamantes)

The central government had planned to start allowing limited numbers of Chinese tourists to visit Phuket in a pilot scheme to reopen the country to international travelers. But a group of about 120 Chinese tourists heading to the festival -- the first foreign tour to the island since Phuket International Airport was closed to international flights on April 3 -- was blocked by Narong to allay local fears of a second wave of infections spread by the new arrivals.

The Phuket Vegetarian Festival is a popular attraction for Chinese tourists because it draws heavily on Taoist Chinese religious traditions. It is said that the festival began in the early 19th century when a troupe of traveling Chinese opera performers fell ill in Phuket and performed rituals to beseech help from the gods for their recovery.

"Previously, many tourists used to come to see the festival, especially Chinese tourists. Nowadays there are hardly any, and most of the locals are unhappy because there is less business," said Chatchai Jadphon, a Phuket resident. 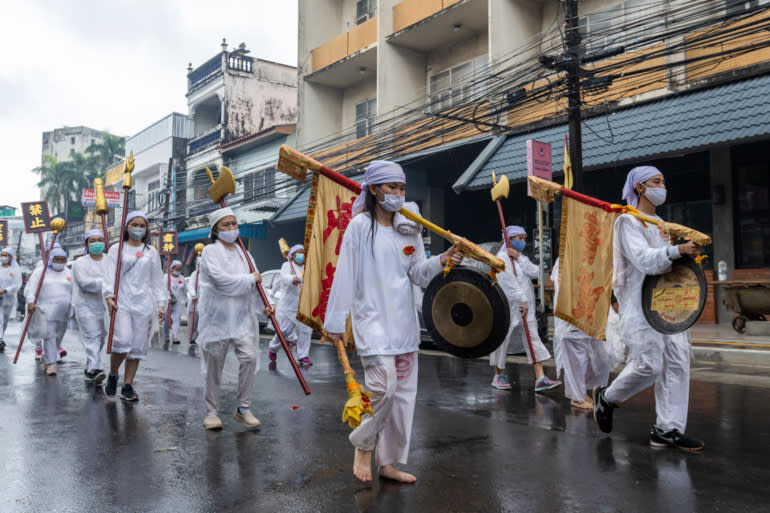 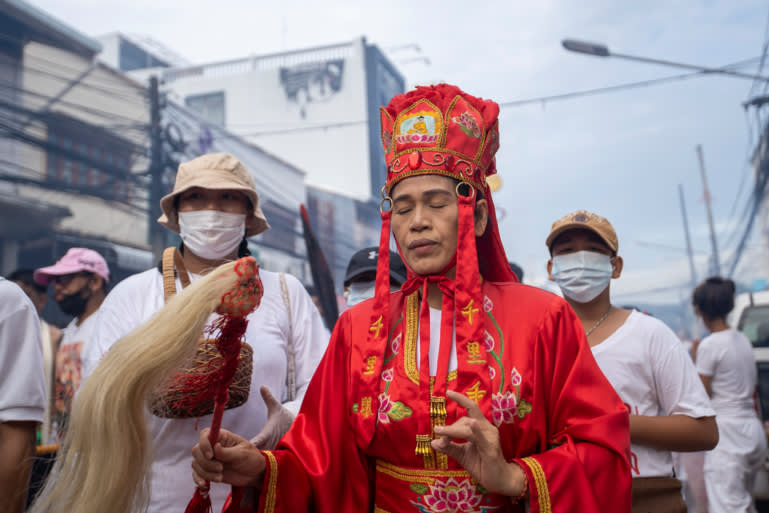 But others said the absence of foreign tourists gave the festival a more authentic feeling. "As a Phuket local we welcome all tourists who come during the Vegetarian Festival," said Parskon Sirichucot, an emergency medical technician. "We ask everyone to join the festival based on tradition. Usually many come and it can make things get distorted. But this time we have clearly seen the important parts of our culture, and despite this year's economic situation the festival has been filled with positivity."

Care was also taken to modify some of the festival's traditional practices in response to COVID-19. One of the most visually striking aspects of the festival are the spirit mediums, who enter a trancelike altered state of consciousness and engage in ritualistic self-mutilation by having assistants pierce their cheeks with long needles or make other incisions to drive out evil spirits. Participating shrines this year were told to limit the number of piercings and the size of incisions due to COVID-19.

Officials and residents in Phuket plan to review the festival for lessons on how to revive the tourism industry and whether a focus on domestic or high-end visitors can best help it recover. Meanwhile, the coming months will be crucial to the survival of Phuket's local economy, which many locals fear will take years to recover from the impact of the pandemic.