SINGAPORE -- Lim Yong Yi is a human lie detector. Lim took the helm of his family's private investigation and security firm five years ago, and, looking for an advantage in the city-state's competitive market for PIs, invested in training on how to read facial micro-expressions. The science was pioneered by the American psychologist Paul Ekman and used`, sometimes controversially, by law enforcement and intelligence agencies worldwide.

Lim's skills -- the traditional and the modern -- are now being deployed to expose cheating spouses, perform background checks on employees and, in a distinctly Singaporean twist, surveil schoolchildren to reassure their parents that they are attending class and not mixing with "bad elements." Not only that. Some clients want to know whether their domestic helpers are moonlighting without their permission.

The city-state now boasts dozens of licensed PI firms, some claiming that their business is booming, driven by rising divorce rates, social media-induced suspicion and shifting social attitudes. Of the half dozen firms that spoke to the Nikkei Asian Review, all but one had expanded their staff to meet growing need; most said they were turning down work due to a lack of capacity. Prices vary widely, but are steep and rising. Rates of between 100-150 Singapore dollars per hour ($75-113) are standard, with extras for expenses. Even a simple infidelity case can easily cost thousands of dollars.

Although commercial and labor disputes -- from corruption and bribery to moonlighting domestic staff -- are common fare, the industry's bread-and-butter is still seeking out evidence of infidelity. Ranger Security's matrimonial cases range from suburban cliches to soap opera-esque intrigue.

"We've had the affair with the tennis coach," Lim said. Last year, the mistress of a wealthy Singaporean businessman started to worry that she was going to be supplanted by a newer model and called up the agency. 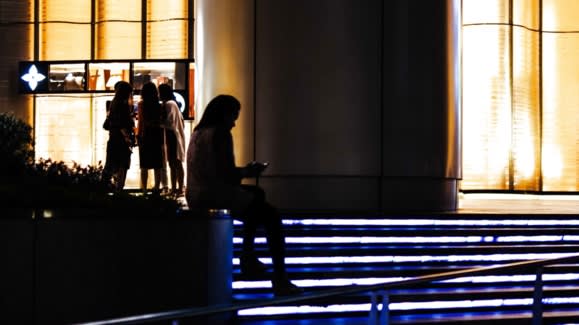 The ubiquity of mobile phone dating apps and "hook-up" services has stoked people's anxiety and increased the need for private detectives. (Photo by Peter Guest)

"She hired us not to know whether he was seeing other women, because she knows he is. But exactly because of that, she hired us to identify the next one who will come along to be the official mistress," Lim said. Once, the firm was approached by a woman who was convinced that her sister-in-law was having a relationship with her father, a case that Lim ultimately did not pursue. "Definitely the backgrounds are always complicated."

Parents calling on PIs to investigate their own children, on suspicion that they might be skipping school or taking drugs, has become common over the last couple of years, fed by Singapore's infamous obsession with educational attainment.

Surveillance usually entails a three-man team, including a bike and a car. Lim eschews long-lens photography for a more reactive, close-up approach using handi-cams. The key, he said, is finding what he calls the "critical window"; the moment and location where the infidelity or wrongdoing is taking place. Often that comes from the client's suspicions, but these days Facebook and Instagram often yield clues.

Private investigators are tightly regulated in Singapore -- 97 currently have approval from the police to operate in the city. All have to pass a training course on what they can and cannot do. Hacking into private data is clearly prohibited, but social media provides a wealth of public information about private individuals, and PIs are now routinely able to size up how people live, where they go and with whom.

At the same time, the advent of dating apps and "hook-up" networks, such as Tinder and Ashley Madison, have created new avenues for infidelity, and private detectives say that they have had cases stemming from these, as well as other more exclusive networks. As Lim said: "People do get paranoid, but people do get naughty as well. There's a fair rationale to that."

However, most say that socio-economic factors have had a more profound impact on their business. The divorce rate in Singapore has grown by about 10% over the past decade. The city-state is still fairly conservative, but divorce is no longer anathema, gender equality is gradually improving and women are increasingly economically empowered, meaning that they can afford to be clients, and also to be independent.

"So now there are more women checking on their husbands as well. If they are not performing well, then out they go," one private detective, who asked not to be named, said in an interview in a Chinatown office crammed with surveillance gear. "For sure we can see a shift. Last time it was only the crying wives that come here. Now it's the crying husbands."

Popular forums, such as mummysg.com, have long threads asking for recommendations from men and women: "My wife is cheating on me. I have her SMS to the guy as evidence. But it's not enuf [sic] in the court of law"; "I need help urgently... I know my wife is cheating on me. So I need to get a evidence from a reliable PI and a good rate with it"; "I'm dating a guy but he seems to be hiding his real identity. Would like to hire a PI to check his background."

"I am interested in the service of the PI who can place the magnetic surveillance under the car and I will do the monitoring myself. Please kindly advise me more," a user called 'Lost love' posted in August.

Very often, cases have an international dimension. Although Singapore has its own "red light" districts -- like Sungei Road and the old Orchard Towers along Orchard Road -- it also has two hubs of affordable vice and negotiable virtue on its border, in Indonesia's Batam island and Malaysia's Johor Bahru. Besides its own "red light" districts, such as the old Orchard Towers along Orchard Road, Singapore has two nearby hubs of affordable vice in Indonesia and Malaysia. (Photo by Peter Guest)   © Reuters

One investigator said that "JB" as Johor Bahru is known, is still a popular destination for straying spouses; he had just returned from tracking a husband who would regularly drive drunk to the Malaysian border, telling his wife he "needed a massage."

These days, though, PIs often have to go further afield, to Thailand and Vietnam, and increasingly to China, where private detective work exists on the grayer edges of legality.

"We will do surveillance, but we must do it discreetly," said James Loh, managing director of International Investigators, who now frequently takes on work in China. "You need to be more careful, and we charge very high." While many of the cases that come to private eyes seem universal, some are uniquely Singaporean -- for example, investigating domestic workers to make sure that they are not moonlighting is relatively common. When it comes to checking on children, Singaporean parents' forums are full of threads asking for recommendations for trusted firms.

"They suspect maybe they're taking drugs, maybe not going to school. Smoking... There have been significantly more in the last two or three years," said one veteran investigator, who also asked not to be named.

The investigator, whose office overlooks the warren of streets around Bugis populated by dozens of fortune tellers and geomancers, said that there is something in the national character, its conservatism and obsession with propriety, that makes Singaporeans turn to private detectives.

"Maybe we want to keep up appearances," she said. "You have to show you're a good wife, a good father, you don't tell anybody [about your fears]... so what else can you do but hire a private investigator, who will do everything privately?"