HONG KONG -- Nestled among Hong Kong's many hills are military relics that tell a graphic tale of the region's wartime history, but which have been neglected and left exposed to damage by the elements.

Among them is an artillery observation post built by the British colonial authorities in 1936-38 on Braemar Hill, an area now famous for its luxury mansions and skyrocketing prices. The site came to light after being identified by professor Lawrence Lai, an expert in urban planning in the University of Hong Kong's real estate and construction department.

Lai, who has been studying aerial photographs and maps over the last 20 years, says he has mapped out more than 150 military structures. But many more World War II relics are scattered across the region, including the so-called Gin Drinker's Line, an 11-mile system of trenches, bunkers, pillboxes and tunnels in the New Territories, north of Hong Kong Island, which was intended to stop an invading army in its tracks but was undermanned and fell in a single day.

Now a special administrative region of China, Hong Kong was a British colony from 1841 to 1997, and was occupied by the Japanese military during WWII from the end of the invasion on Christmas Day 1941 to the Japanese surrender in 1945. Despite the region's rich and complex history, preservation work on WWII installations is still in its infancy, according to Lai.

"Military heritage is part of the eventful international history of Hong Kong as part of China and the wider world," he says. "As part of Hong Kong's 'negative heritage,' which evokes bad, unhappy, tragic or other emotionally stressful memories, they are reminders of the need for peace and reconciliation." 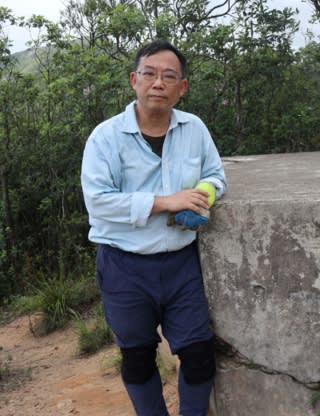 Lawrence Lai, a professor at the University of Hong Kong and an expert in urban-planning, was the first to identify the site. (Takeshi Kihara)

Interest in both the heritage and tourism value of the relics is growing. The territory's Agricultural, Fisheries and Conservation Department, which oversees rural parks, told Nikkei Asia that it was trying to promote the appreciation of war relics in country parks, and had established three heritage trails -- the War Relics Trail in Lion Rock and Ma On Shan; the Pinewood Battery Heritage Trail; and the War Relics Trail in Shing Mun -- in 2001, 2006 and 2015, respectively.

The department said it had spent more than 1.4 million Hong Kong dollars ($180,000) on support facilities such as boardwalks and interpretation panels in the latter two trails. However, Lai says there is still no concrete implementation strategy or planning guidelines for WWII relics, many of which are now very hard to find.

Leading a trip to the Braemar Hill post, Lai and his team start with a hike along Sir Cecil's Ride on Hong Kong Island, named after Sir Cecil Clementi, governor of Hong Kong from 1925 to 1930, and now part of a 4 km heritage trail tracing the battle for Wong Nai Chung Gap, one of the bloodiest clashes in the defense of Hong Kong. Top: Lai says the stones set into the surface of the pillbox act as a sort of camouflage by disrupting the way is reflected. Bottom: A view from the other side. (Takeshi Kihara)

After a 15-minute walk, Lai and his team follow ribbons attached to trees and turn uphill on a narrow, unclear path enclosed by branches that block visibility. They eventually arrive at an open area where the concrete structure is located, overlooking Victoria Harbor.

Lai says this was the site of an artillery observation post. "Inside, there were range finders, telephones and cables. The soldiers could observe enemy movements and report them to headquarters in Admiralty [district], the Victoria Barracks, where the Marriott Hotel now stands," he says.

Cookielike pebbles on the surface of the pillbox are a typical feature of artillery observation posts, he adds, because they minimize the reflection of light to make the installations difficult for enemy forces to spot.

The Japanese later modified this structure for their own use, turning it into a defensive structure. "Once Japan went on the defensive [during WWII], they hurriedly built some defense structures in Hong Kong," Lai says. "They also turned some of the artillery observation posts and searchlight towers on Hong Kong Island like this into pillboxes." 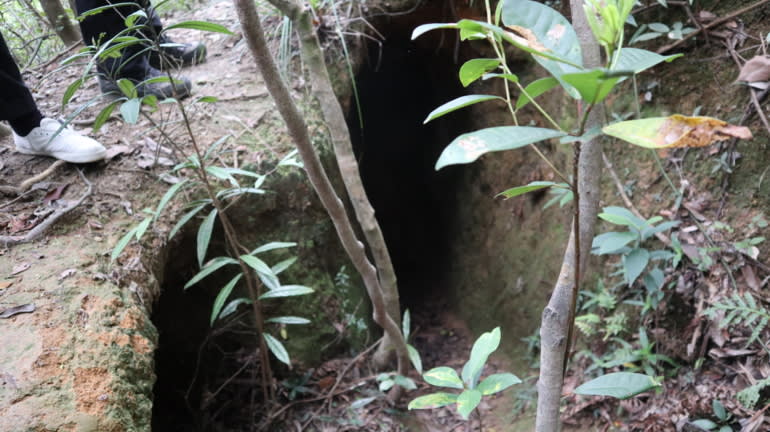 Entrances to tunnels believed to have been dug by Japanese soldiers. (Takeshi Kihara)

Traces of the changes that the Japanese made can be found inside the structure. Light shines through small gun port openings. There is a tunnel entrance in the corner, which is believed to have been dug by Japanese soldiers. "There are many tunnels built by the Japanese nearby. This pillbox may have served as a command center for the local tunnel system," Lai says.

While Lai estimates that the structure could remain standing for another 40 years, he notes that the soil is subsiding because of a loss of groundwater, causing cracks in the walls. Vegetation around the pillbox has also damaged the structure.

"The [colonial administration's] afforestation scheme after WWII was successful, but the government did not take notice of [these military structures]. Many of them were actually engulfed by trees," Lai says. "If you do not spruce up the area, then this place will be destroyed by trees very soon." 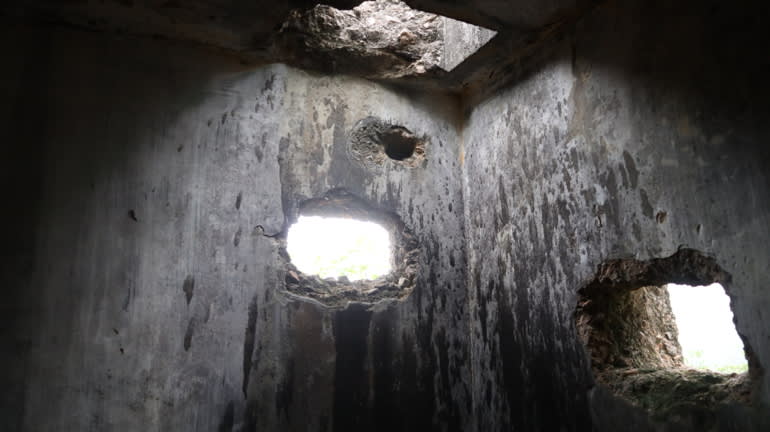 Hong Kong's Antiquities Advisory Board is responsible for grading historical buildings according to several assessment criteria, including historical interest, architectural merit, social value and local interest in terms of authenticity and rarity.

The region's 1,444 graded historical buildings include only two pillbox sites -- at Luk Keng and Diamond Hill -- with four other pillboxes currently being assessed. The board appears to lack information about the Braemar Hill structure. Lai says the grading system is mostly focused on architectural merit, rather than historical significance.

Even historical buildings with architectural merit have sometimes been demolished or left to rot, however. In 2020, a century-old arched-brick underground reservoir was destined for demolition, with parts already torn down. It was saved by public complaints after photographs were posted on social media. After a review, the board awarded the site Grade 1 historic status. The service reservoir on Bishop Hill, believed to have been built in 1904. (From the Facebook page of Hong Kong Chief Executive Carrie Lam)

In a written response, the government's Antiquities and Monuments Office said it "stands ready to offer technical comments from the heritage conservation perspective" to related government departments for the maintenance and construction of information panels and footpaths for graded items.

Looking beyond heritage preservation, Kwong believes it is more important to present the history in a clear and accurate way. With that goal, his team, which includes military history expert Tony Banham, has transformed decadeslong research efforts into a webpage that highlights the history of the Battle of Hong Kong in December 1941.

Launched on Aug. 29, the map contains locations of over 200 existing military structures, as well as details of the 18-day battle -- including the routes of the armies, stories of people participating in the war and historical photos -- in chronological order. 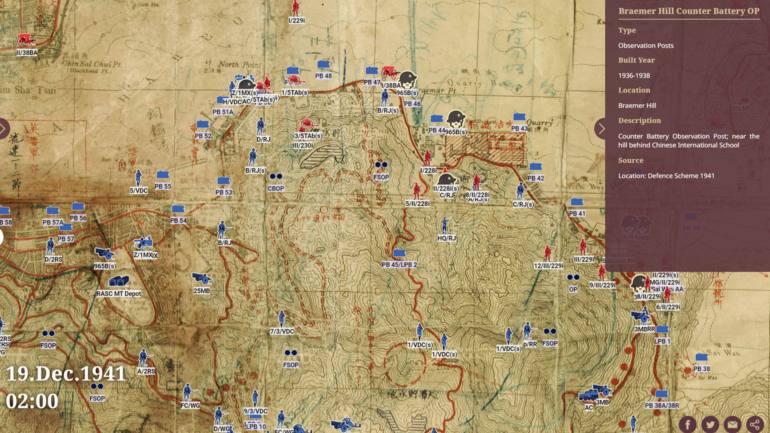 Top: A screenshot of the online interactive historical map built by Kwong Chi-man, an assistant professor of history at Hong Kong Baptist University, and his team. It pinpoints, among other things, the Braemar Hill military structure and the exact location where the photo at bottom was taken of Japanese Army Col. Ryosaburo Tanaka overlooking Aldrich Bay. (Screenshots from The Battle of Hong Kong 1941: A Spatial History Project website)

"This part of history is important in showing the international community of Hong Kong," Kwong said. "By understanding the experiences of different people, one can see the battle from multiple viewpoints and learn to embrace diversity by viewing it from different perspectives."

With an HK$1.57 million grant from the government's Quality Education Fund to build the map, the team will design related teaching kits for secondary school teachers. Kwong also hopes the map will be useful for heritage preservation and further research.

This echoes Lai's hope that the regional government will connect individual relics to a wider narrative of the wartime period, including drafting a systematic conservation plan for WWII relics and adding the region's military heritage to school history and geography syllabuses.

"I think [military heritage is] not just about the age, [but] also about World War II and the international status of Hong Kong," Lai notes. "People of this generation should know about it, because this is a part of Hong Kong's global history."