French foie gras appears in the midst of this 23-course Chinese banquet, accompanied by morel mushrooms and shreds of gold leaf. And the final dessert is a gummy jelly that melts on the tongue in staggered blasts of sour, sweet, bitter and spicy flavors.

Andre Chiang, a Taiwanese chef who spent 17 years working in France, has returned to his roots in promoting the concept of "Chinese modern" at the recently opened Sichuan Moon in Macau's Wynn Palace Hotel.

"Like nouvelle cuisine, the idea is to present something healthier and cleaner, also more relevant," Chiang noted, rising proudly to his full 1.8 meter height, replicated exactly in a single strand of "longevity" noodle. "Each dish shows my excitement of discovery, using the same components, but in less of a straight-line manner. It's a kind of Chinese food that isn't just for Chinese people, but can take its equal place in the world of fine dining."

How do you turn the world's oldest culinary tradition into something contemporary, with a special emphasis on locally-sourced ingredients and elegant presentation? 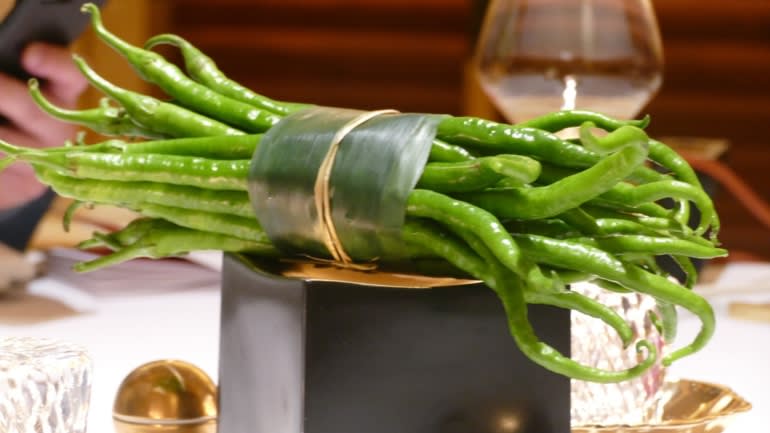 Fresh peppers as a non-edible centerpiece at Sichuan Moon. (Photo by John Krich)

Chefs and restaurateurs in both Hong Kong and its neighboring Macao Special Administrative Region are urgently grappling with this question -- where diners with increasingly international tastes seek alternatives to cookie-cutter Cantonese dinner houses. The results range from the spectacular to the downright strange. Then there is Alvin Leung, the shaggy-haired, tattooed "Demon Chef" famous for judging TV cooking competitions. His barrage of molecular madness has made him, in his own words, "only the second three-star Michelin chef, after Heston Blumenthal, who is entirely self-taught." The cavalcade of 18 offerings at his flagship Bo Innovation are branded as "The Hong Kong Story."

That means drawing on childhood memories to produce dishes with names like "Smell My Granny" or "Green Eggs and Magnolia Ham." There is kung fu fighter Bruce Lee's favorite style of tofu ball, stuffed with oyster juice and labeled with a Chinese character drawn in black garlic sauce. Luscious crab bits are stuffed into a jar for baby food and scooped out with a Peter Rabbit spoon. Among the courses, he brilliantly encapsulates the five Chinese elements. "Metal," for instance, is an aluminum bowl filled with steaming liquid nitrogen to instantly freeze a deftly metallic meringue of salted pineapple.

At over $400 a meal, Leung knows "this might be your one visit in a lifetime so I want to show everything I got." He adds that "My palate is Chinese, just like it's Indian for Gaggan," referring to the Bangkok restaurant rated number one among Asia's 50 Best Restaurants four years running. For sheer theatricality, the Demon Chef has no other rivals -- perhaps because few dare to stay "Chinese" by so thoroughly ditching all Chinese strictures.

Younger chefs schooled abroad are likewise turning out El Bulli-style tasting menus rather than vast "a la carte" choices from column A or column B. At Tate Dining Room, the award-winning Vicky Lau produces eight courses she calls "odes" in homage to Chilean poet Pablo Neruda and terms "innovative Chinese." Yet her artistically composed plates, reflecting her training as a designer, seem more firmly rooted in the French tradition. The blue lobster is topped with Shaoxing wine "foam," while her treatment of abalone amounts to a paper-thin carpaccio presented in a contrasting checkerboard. More traditionally, the sumptuous proceedings begin with a pudding that replicates the intense flavor of a thousand-year egg and ends with a Mandarin orange sorbet. "Smarter techniques, fresher flavors, the new horizons created by travel," states Lau. "Modern doesn't just mean changing, but changing for a reason."

At the nearby VEA, the Canadian-trained (male) chef Vicky Cheng takes the opposite approach to produce similar results. In a space as dark as Tate is bright, along a counter fronting a kitchen as exposed as Lau's is discreet, this young innovator showcases what he calls "Chinese x French" by starting with local ingredients and building outward. Where plating and settings bear no resemblance to anything conjured by the term "Chinese restaurant," signature dishes include sea cucumber topped with rice wine sprayed from a perfume atomizer, and the classic char sui barbecue features high-grade beef instead of pork. VEA may be at its best in topping a single softened slab of daikon radish with black truffle and the intense yolk of a specially-fed taiyouran egg. Displaying the brashness of youth, blond-coiffed May Wong has embraced the "modern" label at her Happy Paradise, jokingly named after a massage parlor where trendy Soho clientele bathe in the reflection of a multicolored neon art piece installed on the ceiling. The limited menu seems more a score sheet of recent experiments rather than polished staples. "It's like a deejay's playlist where I'm just trying to have fun," she explained. She studs baked pumpkin with pieces of shrimp and a thick sesame topping, and drops cooked lettuce onto noodles formed from strands of tender squid. "How to uphold both my Chinese identity and global identity?" Wong asked. "Sometimes that means searching for inspiration in the oldest cookbooks I can find."

That approach has also found satisfying fruition at The Chairman, helmed by its owner, Danny Yip. The decor is purposely bland to avoid attracting attention from the food. What began as a passionate hobby for the 55-year-old Yip has turned into a full-time obsession with quality. He travels to New Territory organic farms and favors selected fishermen to obtain the best ingredients, while he makes his own soy sauce and works with his team of chefs to "rejuvenate" old recipes he has researched. His house specialties -- "Steamed Fresh Flowery Crab with Aged Shaoxing Wine, Fragrant Chicken Oil and Flat Rice Noodles," and "Oxtail Stew with Dried Mandarin Peel" -- are "familiar to all Chinese but tasting nothing like what they are used to." His mission is to rescue the greatness of Chinese food from decades of mass standardization, Yip said. "Making flavors stronger by taking things out," is one of his mottos. Going forward by going back is a strategy that has worked for other top Asian chefs like David Thompson in Thailand and other celebrity chefs throughout a fast-changing Asia.

Andre Chiang might agree, even if Sichuan Moon's dan dan noodles are topped with the essence of ten spices dribbled from a test tube. In cooking, as in other arts, the most avant-garde may just represent a return to what is most ancient.

In an article entitled "Ready or not, here comes contemporary Chinese cuisine," published on line on May 17 and in our magazine on June 10, we wrongly suggest that the Mott 32 restaurant in Hong Kong serves shark's fin soup. It does not and never has done. We apologize for the error.