TOKYO -- When World War II drew to a brutal close, leaving much of Japan destroyed, along with the physical devastation the country saw a way of life disappear.

Now, a project out of Tokyo University has inspired a growing group of individuals, media outlets and museums to participate in colorizing the prewar past to enhance not just the way Japan remembers history but the way it feels it too.

Appropriately, the genesis of this movement was in 2017 in Hiroshima, when then-high schooler Anju Niwata began participating in the Hiroshima Archive project, developed by Tokyo University professor Hidenori Watanave.

Seeing the effect that Watanave's AI-based colorization had on old photographs, Niwata began asking some of the war survivors she was interviewing for the project whether they would like to see their own photos colorized too. And so was born what Watanave would later call the Rebooting Memories Project.

Now a student at Tokyo University, Niwata, along with Watanave and his team of lab assistants, has helped to colorize hundreds of photographs, publishing them across various mediums, including on social media, where Watanave's Twitter account just passed 63,000 followers. This has inspired others to do the same. 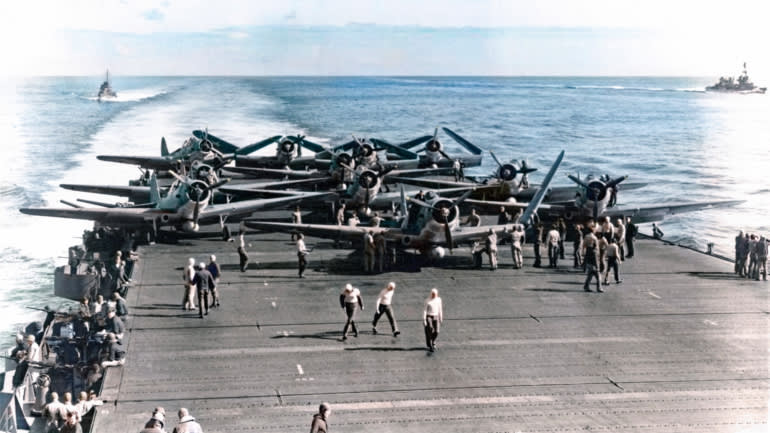 Top: Douglas TBD Devastator torpedo bombers are prepared for takeoff from the USS Enterprise during the Battle of Midway on June 4, 1942. Bottom: A burial march in Kure on March 31, 1943, for captains who died during a midget submarine operation. (Photos courtesy of Hidenori Watanave)

Yuichi Horinyo, an office worker from Osaka who has built up 13,000 followers on Twitter, where he uses the handle Horinyo, with colorization of photos from the prefecture of Okinawa, had an unlikely path to his position of social media influence.

After visiting Okinawa for the first time as a high school student, he continued to visit on summer holidays after graduation. "At that time, I wasn't concerned with history," Horinyo told Nikkei Asia. "I just loved the beautiful scenery, cuisine and the sound of the sanshin," a traditional Okinawan samisen-like three-stringed instrument.

Horinyo's dormant interest in history was sparked by the 2016 animated film "In this Corner of the World," a fictional, often tragic, wartime drama about a young woman living in Kure, which neighbors Hiroshima. "I was deeply shaken by this film," Horinyo said. "I went to the theater repeatedly and felt the time between now and the prewar and war eras slipping away."

Seeing the characters' struggles depicted realistically in color led to a feeling of "continuity between their experiences and our present lives," said Horinyo.

After he began devouring books on the prewar lives of Okinawan women, Horinyo came across Watanave's Twitter account in 2018. Seeing how he had colorized historical photos, Horinyo traveled to Yokohama to participate in a colorization workshop. Top: Nagoya during a firebombing raid by USAAF B-29 Superfortress aircraft on May 14, 1945. (Photo courtesy of Hidenori Watanave) Bottom: Teachers and children pose for a photograph on Le Island, Okinawa, on April 25, 1945, after it was occupied by U.S. military forces. (Photo courtesy of Horinyo)

Later, in Okinawa, Horinyo attended an exhibition of black-and-white photos from the 1950s organized by The Gail Project, a University of California, Santa Cruz initiative looking at the impact of the U.S. military occupation of Okinawa.

"I asked the host university professor at the site about colorizing some of the photos," said Horinyo, "to see if engagement could be increased this way. I received consent."

That very evening, sitting in his capsule hotel room, Horinyo used an AI coloring app to render his first image, touching it up using the pen tab on his iPad. "The response was so good," he said, "that I wanted to continue."

After colorizing about 20 photographs with the Gail Project, Horinyo began accessing images from the Okinawa Prefectural Archives. Since January 2020, he has concentrated on coloring photos from the 1945 Battle of Okinawa.

"In the Battle of Okinawa, prewar photos were destroyed by fire, and then after the war, there were times when pictures couldn't be taken freely because it was under the control of the United States," said Horinyo. "Therefore, prewar and postwar photographs of Okinawa are valuable."

According to Keisuke Kadoi, a curator at the Museum of Kyushu Sangyo University in Fukuoka, colors add so much more information visually. "Present-day photography is in color, so it feels common and familiar," said Kadoi. "Therefore, in taking black-and-white photography and making it color, one can connect with the expressions of people in the past." 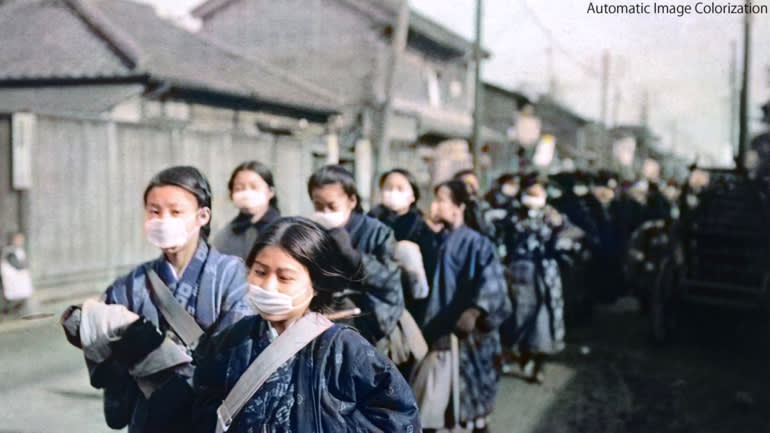 The Museum of Kyushu Sangyo University recently hosted an exhibition titled "Reviving Okinawa, 1935," featuring around 100 photographs sourced from the archives of the Asahi Shimbun, which also participated in the exhibit's layout, with the colorization executed by Watanave's Tokyo University lab.

"Because I'm from Okinawa," one visitor told Kadoi, "I'm glad I could see Okinawa in an era I didn't know."

Participants in this now-decentralized colorization movement even include the U.S. government, with Watanave's lab able to access wartime and Occupation photos owned by the U.S. military, and Horinyo himself processing public domain images from the U.S. Library of Congress.

Of course, colorization isn't perfect. According to a 2019 paper by Watanave and Niwata that outlines the process, their AI program was trained using millions of pairs of black-and-white and color photos. Still, the program often has difficulty with objects that require complex interpretation, such as the print pattern of a kimono.

That is where survivor interviews are invaluable, with Niwata and Watanave able to conduct interviews to help fill in the blanks. As for Horinyo, while he doesn't have the resources available to the Tokyo University team, commentary on social media has helped refine things. Many of the photos that people have chosen for colorization speak directly to the human condition. 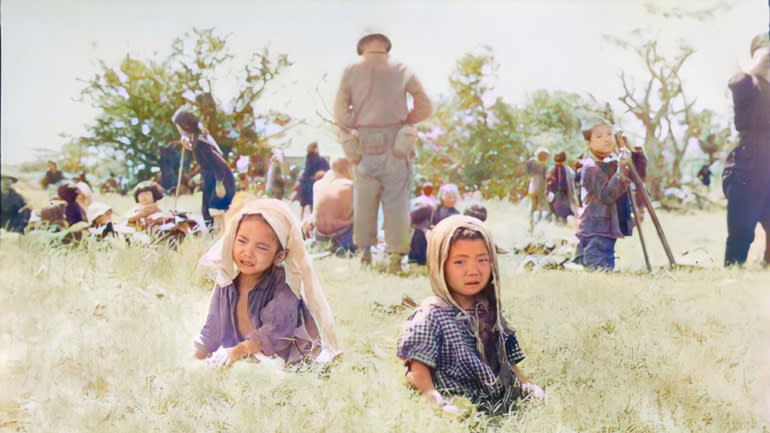 Top: Two siblings cry for their missing mother in a U.S. refugee-processing camp in Okinawa in June 1945. Bottom: Left, a U.S. Marine holds a baby in Okinawa as its mother looks on in; middle, kamikaze pilots play with a puppy shortly before the one holding the dog departs on a mission; right, a mother keeps her eye on the intensifying battle in Shuri, Okinawa, in June 1945. (Photos courtesy of Horinyo and Hidenori Watanave)

One heart-rending image colorized by Horinyo shows two siblings crying for their missing mother in a detainment camp in June 1945. Another from the same month shows a U.S. Marine cradling a baby with its Japanese mother looking on; Horinyo’s Twitter caption describes how the soldiers worked hard to ensure that parents and children received medical treatment.

Other highly charged images published by Watanave's lab incudes one photo of a soon-to-die kamikaze pilot cuddling a puppy with other young conscripts, with no hint of the extreme action the pilot is about to undertake. Take out the military uniforms and it could be a group of high school boys anywhere enjoying a moment of innocent fun.

"What kind of life did they have, what joys and sorrows did they have, and what rational decisions did they make from the few options in their situation? I think that understanding these people will help foster empathy for others," said Horinyo.

For Kadoi, the curator, colorization provides access to Japan's history: "What is lost cannot be restored, but by being remembered in some medium, it is possible to know what existed in the past; it becomes familiar."