Failure of tourism projects leaves Yingxiu looking for a role YINGXIU, China -- Nestled in misty green mountains, the small town of Yingxiu is made up of handsome stone buildings that house numerous restaurants and guesthouses (59 and 67 at the last official count). Chinese national flags flutter from every balcony and signpost in the main street -- spots that in other towns would be reserved for advertising.

But the town is eerily quiet. At first glance, Yingxiu could be taken for a newly constructed resort town, empty as it waits for the start of its first season. In fact, the town in its current form has existed since 2010, following reconstruction after Sichuan Province was hit on May 12, 2008 by a magnitude 8.0 earthquake that left 90,000 people dead, 375,000 injured and 4.8 million displaced.

In Yingxiu, close to the epicenter, 5,462 people died, 80% of the town was destroyed and the main building of the collapsed Xuankou Middle School, listing like a sinking ship, became one of the disaster's most memorable images.

Before the earthquake, Yingxiu's economy depended on agriculture and small industry. Power plants, pharmaceutical factories and other industrial facilities supported local and migrant workers, while the verdant hills above were dotted with villages and farms. As well as hitting industry, the earthquake and its aftershocks and landslides destroyed what little land there was for farming. In the aftermath, the government committed 1 trillion yuan ($157 billion) toward the reconstruction of Sichuan's earthquake-damaged areas, and Yingxiu, as the physical and metaphorical center of the disaster, became the project's focal point. Amid hopes that tourism would be the main engine of economic reconstruction the official aims were "developing big tourism," "forming large industries," and "establishing large enterprises."

Yingxiu's new role as a tourist attraction was planned by the Chinese central administration with the "build it and they will come" mentality that characterizes most of the country's tourism projects. But little input was sought from residents, and there was little transparency in the process.

The rebuild was designed by the architect behind Wide and Narrow Alley, a historical reconstruction in the provincial capital of Chengdu that has become a noted center of leisure, commerce and tourism. A new highway shortened the travel time between Chengdu and Yingxiu to less than 1.5 hours. In 2013, the National Tourism Agency designated Yingxiu a "5A" tourist attraction, the nation's highest rating, in the hope of drawing visitors. 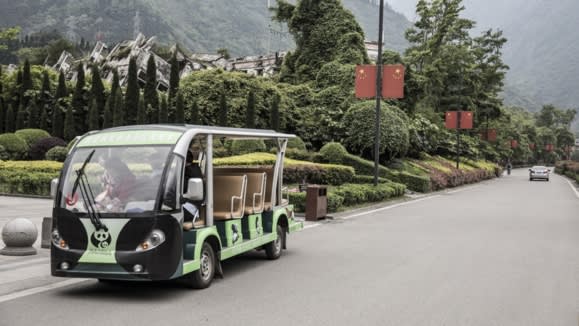 A tour bus runs in front of Chinese flags and ruined buildings. (Photo by Yang Junzhe)

The local government also provided financial incentives for the private sector. Yi Mi Yang Guang (A Ray of Sunshine), the company behind the redevelopment of Lijiang -- a World Heritage Site in Yunnan Province that harnessed tourism after an earthquake in 1996 -- answered the call. The company set up a branch in Wenchuan, the county that includes Yingxiu, and opened a new resort with facilities including teahouses, bars and a sunbathing area, with a 40-year lease. But the project faltered, closing in 2012 after losing money.

Even as outside businesses were leaving, residents with few other economic options were buying into the tourism plan, converting their homes into guesthouses and opening restaurants. But without the large number of tourists predicted, many have since closed.

In trying to replicate the success of Lijiang, the authorities "went completely against the laws of the market," said Wang Chen, a prominent artist and Yingxiu resident. The plans did not take into account the geographical factors -- especially climate and location -- that made Lijiang's regeneration possible.

One major factor has been that Yingxiu is close to Chengdu and other regional attractions, such as the city of Dujiangyan, the Jiuzhaigou valley and the Wolong Panda Reserve, but has comparatively less to offer. Most tourists arriving in Yingxiu spend an hour or two at the earthquake memorial before heading on. They may stop for lunch, but few stay for dinner or overnight. 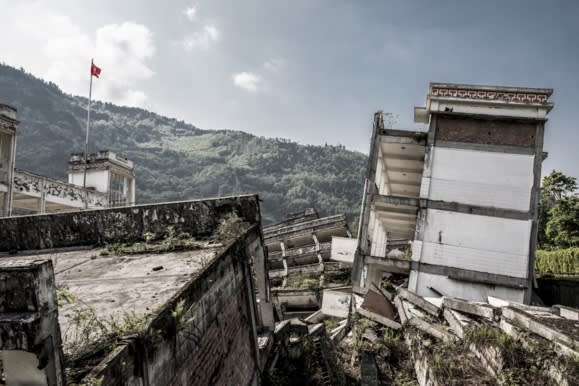 A Chinese flag flies over the rubble of Xuankou. (Photo by Yang Junzhe)

"After seeing the ruins, [visitors] just want to leave," said Wang. "But after a tourist leaves, they are not contributing to tourism revenue." Today, the only outside business that remains from the town's hopeful days of renewal is the Cha Xiang Zi tea company.

The town's lack of tourism staying power is also due to its singular focus on the earthquake. The main attraction is the ruins of Xuankou school. There is also a public cemetery for thousands of bodies recovered from the rubble (many were never found), an earthquake museum, attractions such as an earthquake simulation facility, and lessons in survival skills given by actors wearing the uniforms of crisis response teams.

Wang has ideas to diversify the tourism economy. At a local political meeting earlier this year, he suggested expanding the town's tourism area to the mountains that surround it, which include part of the route of the "Long March" of insurgent communist troops in 1934-1935 and part of the ancient Tea Horse trade route. But, he said, it would have been much easier to do this 10 years ago, when the country's attention was still focused on Yingxiu.

Despite the gloomy outlook, there is one steadfast group of returning visitors to the town. Members of the Chinese Communist Party and associated organizations make regular pilgrimages to Yingxiu to see what they consider a model of successful state-led disaster response and reconstruction. On the surface, at least, the immaculate town fits this narrative. A woman looks at exhibits at the earthquake museum. (Photo by Yang Junzhe)

The earthquake museum that sits above the main town provides a clue to what draws the party faithful: While artefacts of the disaster are placed throughout, the vast majority of exhibits focus on the response of the CCP, with separate sections devoted to the actions of state media, military and medical staff, and to the communist leaders who visited.

In May 2010, Sichuan's then-party secretary, Liu Qibao, declared during a visit that Yingxiu would become a "world-famous township." The next year, a column in The People's Daily called the town's reconstruction "mind-blowing."

Beneath the uplifting narrative, however, is an undercurrent of dissatisfaction about how the local government spent the reconstruction funds and how little say the purported beneficiaries had in the process.

"Visitors think we've gotten a lot of money from the [local] government, but what was donated from the volunteers -- we didn't get any of it," said a woman who lost her eldest son in the middle school collapse. She now sells souvenirs to tourists to support eight-year-old twins born after the earthquake.

On May 12, visitors will flood into Yingxiu, drawn by its commemoration celebrations. "Everything has been booked months in advance," one guesthouse owner said gleefully. The extra income is welcome: in a typical month she earns just a few hundred yuan.