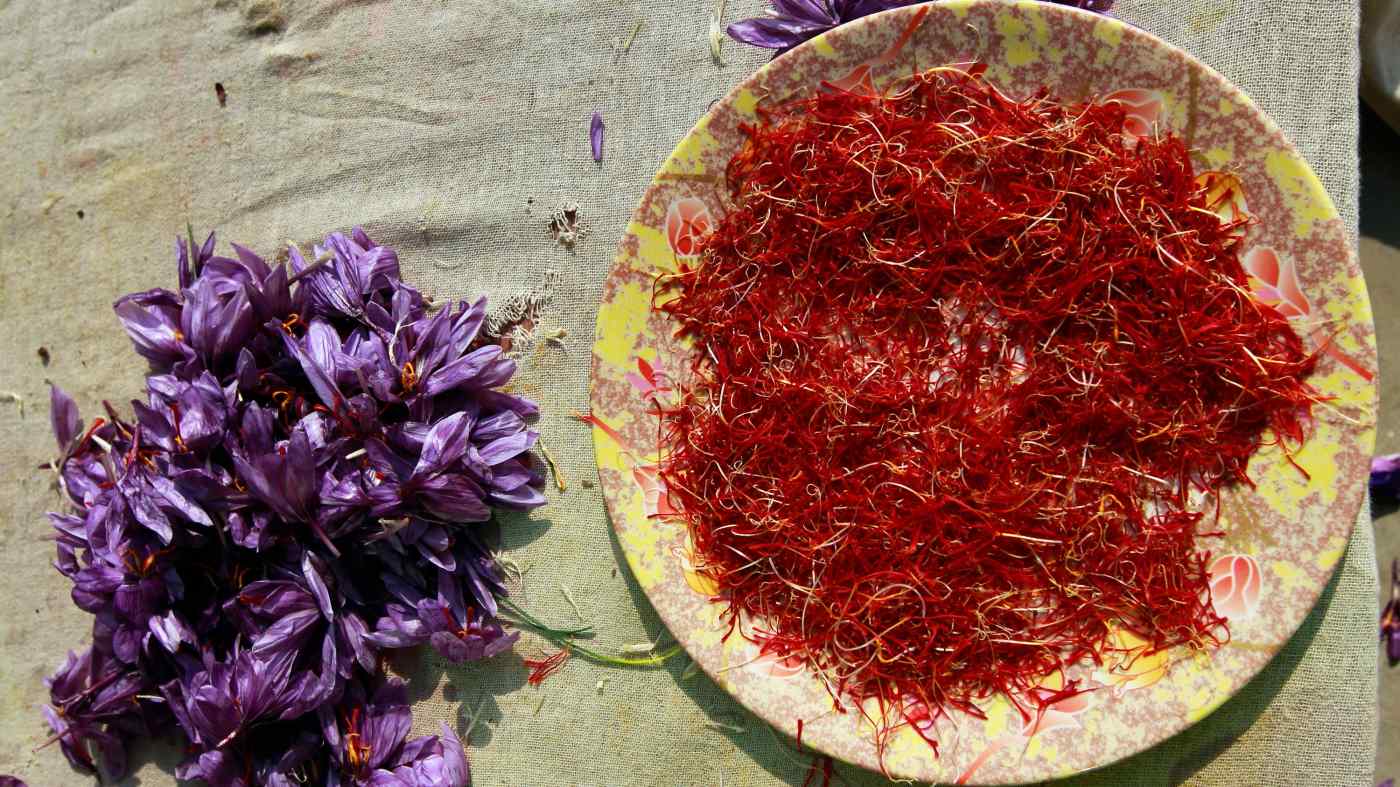 Separated saffron stigmas are collected on a plate next to the flowers during the drying process in the Kashmiri village of Pampore, the "saffron capital of India."    © Reuters
KALPANA SUNDER, Contributing writerSeptember 30, 2020 08:00 JST | India
CopyCopied

PAMPORE, India -- It is a misty morning in early October, and the air is redolent with the fragrance of Crocus sativus, the flower that produces the precious spice known as saffron, or zafran by its Persian name.

Against the backdrop of towering snowcapped mountains and a road lined by willow trees sits a field as big as a football pitch, bursting with purple blooms. Villagers in traditional pherans, or woolen gowns, pick the delicate flowers, filling their wicker baskets.

I am in Pampore, a small village known as the "saffron capital of India" that is a 30-minute drive from Srinagar, the capital of the northern state of Jammu and Kashmir.

Grown in Kashmir at an altitude of over 1,600 meters, saffron is tightly woven into the local economy, with more than 20,000 families engaged in related businesses, mostly in the districts of Pulwama, Srinagar and Budgam. The prized spice is extracted as threads from the stigma and style of the flower.

While there are conflicting accounts about how the spice came to India, most agree that Iranians spread it across the subcontinent as their influence there grew from the 13th century onward, culminating in the Mughal Empire. Iran still produces 90% of the world's saffron. 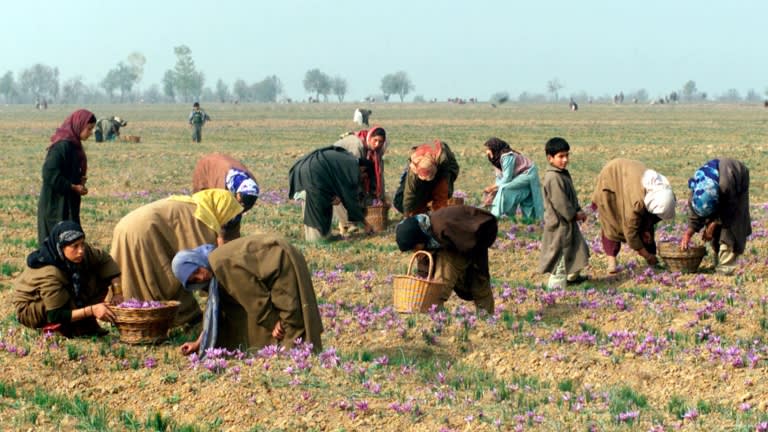 According to Kashmiri legend, in the 12th century, two Sufi saints presented a local chieftain with a saffron crocus bulb after he cured them of an illness. Today, a golden-domed shrine and tomb dedicated to the saints can be found in the saffron-trading village of Pampore.

Saffron has always captured the imagination of the rich and famous. The legendary Egyptian ruler Cleopatra is said to have indulged in saffron baths for their cosmetic and aphrodisiacal qualities. Egyptians also used the spice for embalming and in poultices. Minoan goddesses would dye their gowns with it. Antioxidants found in the spice -- crocin, picrocrocin and safranal -- are said to reduce inflammation, build immunity and aid in fighting Alzheimer's and depression.

"The petals, stigmas and styles have yellow strands and red strands," explains Sunil Mahnoori, a Kashmiri chef who operates a restaurant in Kolkata. "Only the red strands give saffron." A woman removes stigmas from saffron flowers at her home in Pampore.   © Reuters

As a child, Mahnoori accompanied his grandfather, a saffron trader, on collection rounds in Kashmir during harvest season. The floors of farmers' huts would be covered with crimson saffron. "Local women used to grind the leftover petals after harvest with spices like cardamom and dry it in the sun to use in the winter to season their food," Mahnoori recalls.

Saffron is said to be worth its weight in gold. A kilogram of the spice can cost up to $4,000 -- partly because it takes many as 150,000 flowers to produce that amount. Because the seeds produced by the flower are sterile, farmers propagate the flowers asexually using bulbs, called corms.

The spice is also a culinary star used by Kashmiris for stews, broths and kebabs, as well as in milk to break the Ramadan fast. It was under Mughal rule in India that saffron was first used to flavor flatbreads like sheermal, lamb curries and fruit sherbets. 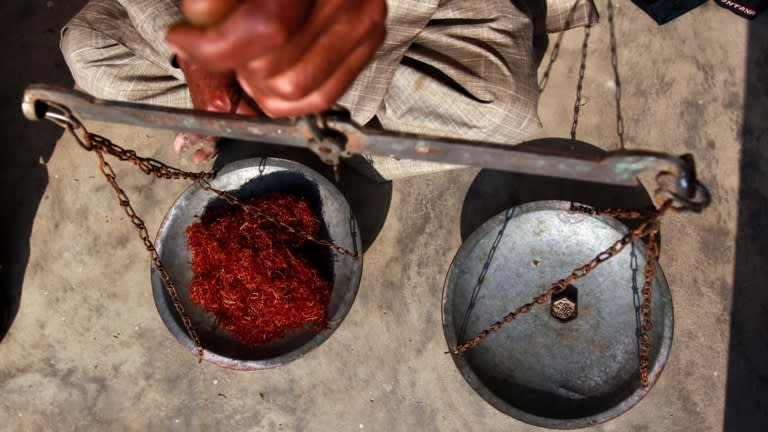 A farmer weighs dried saffron at his home in Pampore. The labor-intensive nature of saffron farming pushes prices higher, with a kilogram of the spice sometimes fetching up to $4,000.    © Reuters

But my favorite is the Kashmiri saffron-infused green tea called kahwa, or kehwa, that I fell in love with on my first trip to the valley. This elixir is brewed slowly in a copper samovar with spices such as cardamom and cinnamon, served with a dash of honey and sometimes garnished with slivers of almond.

Sanjay Raina, an award-winning Kashmiri celebrity chef who runs Mealability, a restaurant in Delhi, says saffron was an integral part of his life while growing up. His signature desserts, like shufta -- dry fruits and spices coated with sugar syrup -- and phirni -- rice pudding -- are coated in fine Kashmiri saffron. "The best way to know if the saffron you are using is genuine is to taste it. It should never be sweet, but it should smell like sweet hay," Raina says.

Monica Dhar, a Kashmiri human resources professional based in Mumbai, says saffron is traditionally used as a prized ingredient that is mixed with yogurt and offered to new brides or grooms on their first visit home. Milk with saffron is a staple for pregnant mothers in Kashmir. Dhar says she still has kahwa tea every day, and "thanks to e-commerce, it's available online now in lovely packaging." 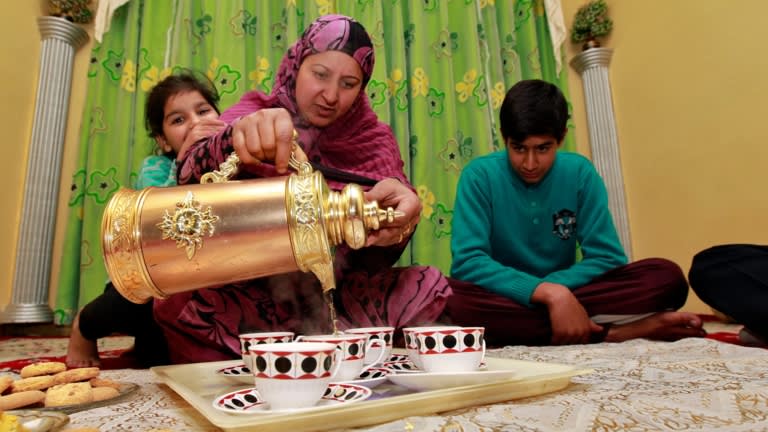 Saffron is a delicate plant that thrives only in moist soils rich in humus -- the dark, organic material that forms when plant and animal matter decays. Harvesting the crop is laborious and time-consuming. Noor Mohammad, a saffron farmer in the village of Lethpora, 15 km from Srinagar, says most of the work on his 2 hectares of land is done by his family, with the peak harvest season falling between Oct. 20 and Nov. 20 each year.

Over the years, the cultivation of saffron in Kashmir has suffered because of civil strife and the heavy military presence there. According to Kashmir's Department of Agriculture, saffron output fell by 65% over the 22 years through 2018.

"Saffron manufacture is also besieged by the problem of spurious substitutes in the market, with an inferior grade of saffron from Iran being passed off as Kashmiri," says Mohammad, the saffron farmer.

In 2010, the central government launched the National Saffron Mission with a budget of $57 million to revive production and study new cultivation methods. The government has also opened a Saffron Trading Centre in Pampore with high-tech post-harvesting facilities. On July 25, Kashmir-grown saffron was given the prestigious international Geographical Indication, a designation that, by certifying its origin, helps protect it from adulteration and enables farmers to fetch higher prices.

According to G.C. Murmu, the state's lieutenant governor, the GI designation is a "momentous decision" that will put Kashmiri saffron on the world map. Of course, checks and standards have to be ensured on the ground, but this is hopefully a beginning of a new chapter in the history of Kashmiri saffron.