NINGBO, China -- While Chinese nowadays are used to the standard Pantone colors, their ancestors enjoyed a far richer array of "poetic" colors inspired by nature. In the Southern Tang dynasty, for instance, the color "heaven-water green" was accidentally discovered when a swath of green silk became drenched by dew overnight. Since dew was considered water from heaven, this gentle shade of green became a playful invention of nature.

Traditional Chinese colors have their roots in everything from astronomy to geography and even everyday food. There is crab-shell green and fish-belly white. Even rice soup represents a light color -- mi tang jiao. While "mi tang" means rice soup, "jiao" describes a lovely, spoiled girl. Hence, it is a subtle, down-to-earth color.

Some colors have bold characters as well. "Pomegranate skirt" is not just a type of skirt; it was also the favorite shade of red among women in the Tang dynasty. While women in other periods were somewhat passive and reserved, their Tang dynasty counterparts were strong and active. They rode horses, embraced archery and danced with swords. This vibrant shade of red celebrates their freedom and bravery. Even today, when a man is impressed by a woman, he is said to "fall under her pomegranate skirt."

Some colors paint vivid pictures, such as "tipsy cheek." The Chinese character tuo is particularly rich in meaning. It consists of the character for "wine" on the left and the character for "zigzag" on the right. After a girl drinks some wine, she starts walking in zigzags and her face glows a certain hue of red -- thus the name of the color. 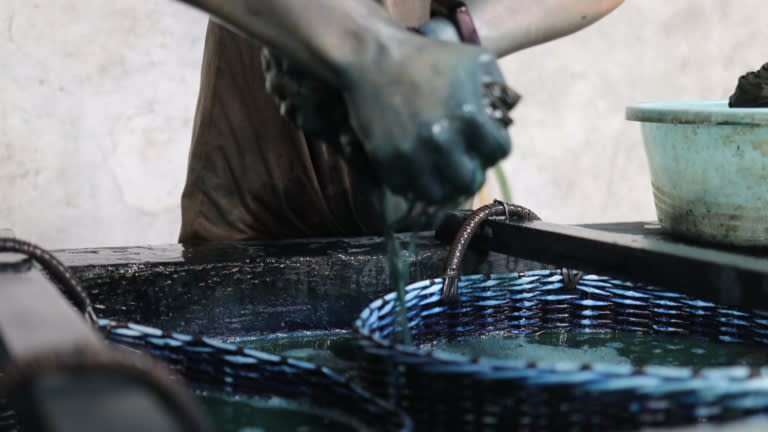 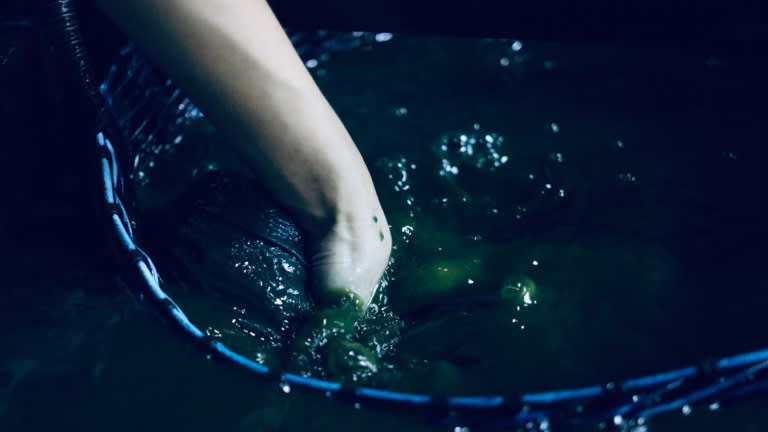 Dyeing with pigment extracted from bluegrass in Sichuan Province. (Courtesy of Liu Yan)

Xuan and xun are colors of the highest order. While xuan is the slightly reddish black color of the sun just as it is about to rise above the horizon, xun captures the slightly yellowish red of the sun as it is about to set. "Xuan and xun are sharp observations of those fleeting moments," says Guo Hao, author of the new book "Traditional Chinese Colors: The Aesthetics of Color in the Forbidden City." During ceremonies in ancient China, the emperor wore xuan on top and xun on the bottom to pay respects to heaven and earth. Images from Guo Hao's recent book "Traditional Chinese Colors: The Aesthetics of Color in the Forbidden City."  After digging through over 400 works of ancient literature, author and cultural researcher Guo Hao noted 384 traditional Chinese colors and matched them with relics in the Palace Museum in Beijing. (Courtesy of Guo Hao)

Blue, by contrast, is a color often reserved for commoners. In ancient China, colors were extracted from plants, and bluegrass is a very common plant used for dyeing. This shade of blue is humble and quiet, which fits the lower social status of those who would wear it in times past. Nevertheless, it was a smart choice for those who engaged in heavy labor, since bluegrass is a medicinal herb that wards off insects, has cooling properties and is said to soothe the mind.

While Chinese today are busy chasing success in a stress-filled society, their ancestors seem to have lived a more colorful life. In spring, they would get out in nature and rest along winding streams, the perfect place for playing the "floating drinking game." They would let a wine vessel float downstream and wherever it stopped, the person sitting there had to drink from it and improvise a poem. It is not only a novel game, but it also embodies a free-spirited attitude toward life. And if they got hungry on those occasions? It is said that people would bring a wonton vendor along with them on such outings so that the vendor could make tasty snacks on the spot. The "floating drinking game" as depicted in the Chinese painting "Meandering Stream at Lanting." Like the names of colors in times past, life back then seems to have been more infused with poetry.

In the days of yore, during the Qixi summer festival, girls would decorate boats with jasmine flowers and go sailing under the moon, wrapped in the flowers' sweet fragrance. They would also lay out fresh fruit and pray to the weaver fairy for nimble hands like hers to create beautiful things in life. However, such customs have been largely forgotten and gathered dust.

As a cultural researcher, Guo says he wishes that Chinese today could "breathe" more colors into life. After digging through over 400 works of ancient literature, he noted 384 traditional Chinese colors and even matched them with relics in the Palace Museum in Beijing. For him, it was like paddling a tiny boat down the stream of Chinese history and culture. He stopped here and there, as there were so many unexpected encounters with colors. 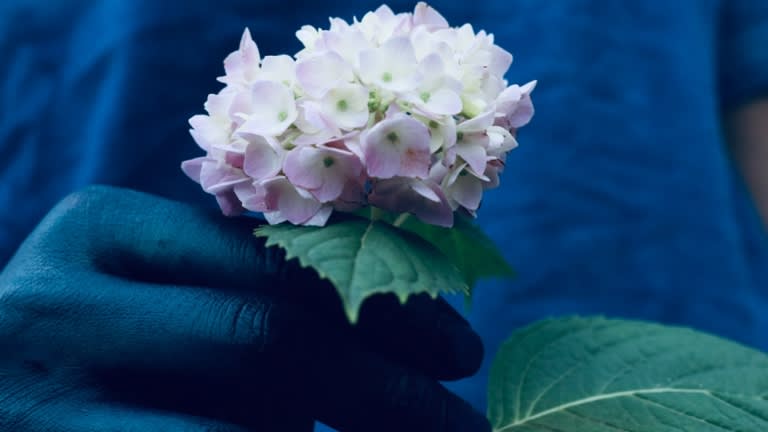 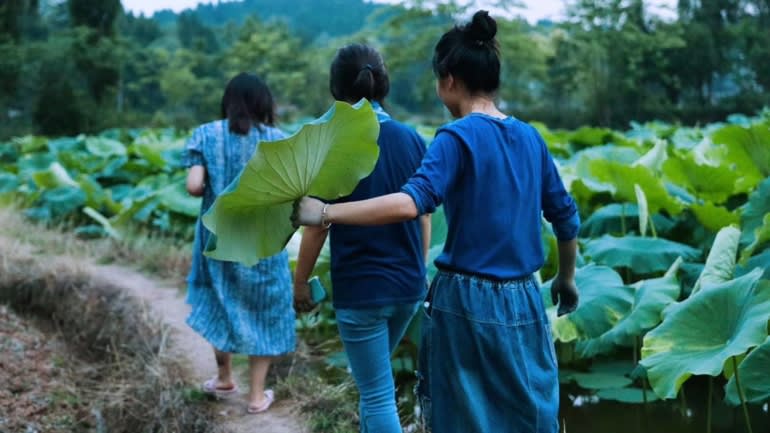 Getting "the blues" in Sichuan. The color was long associated with commoners, but laborers wore it for a reason: The bluegrass traditionally used to dye fabrics is a medicinal herb that wards off insects, has cooling properties and is said to soothe the mind. (Courtesy of Liu Yan)

Before Guo published the book last October, his publisher told him to lower his expectations, saying the book would attract little interest. To their mutual surprise, it became an instant hit and was reprinted six times within seven weeks of its launch. Many young Chinese were mesmerized by these poetic colors and the colorful stories behind them. Guo is hopeful that the colors described in his book will live on. He recalls visiting a school and seeing traditional colors and stories painted on the walls. "I feel it is a good start for immersing children in the color culture," he says.

Perhaps a good way for us to start embracing the richness of color is to create a color calendar. Instead of closing our eyes to the sumptuous array of hues that surround us, one may explore "live" colors from nature every month. From bamboo shoots to lotus roots, one may use the five senses --- sight, smell, touch, taste and hearing -- to truly grasp the nuances of these colors. After all, Chinese color is a way of life.