PENANG, Malaysia -- The statues of two horse leading Thaipusam's new golden chariot glisten under the sun in George Town, the capital of Penang, ahead of the three-day festival starting on Feb. 9. "It looked beautiful, a crowning achievement," said M. Ramachandran, executive director of the Penang Hindu Endowment Board, which has organized the annual festival since 1906. Thaipusam is celebrated by millions of Hindu devotees during the full moon in the 10th month of their calendar.

But this year, the seemingly innocuous golden chariot has raised controversy as it has revolutionized Thaipusam's 230-year-old tradition.

"Based on higher religious authorities in Tamil Nadu, only silver and wooden chariots are allowed to ply city streets," Ramachandran told the Nikkei Asian Review. But on this point, Malaysia's Tamil Hindu community, a modest 6.7% of the total population who started immigrating to British Malaya as a labor force in the 18th to 20th centuries, seems averse to change. The Chettiar-run silver chariot is set to have a golden partner after a 160-year monopoly. (Photo by Kit Yeng Chan)

Until now, Thaipusam's ritual procession to Penang's Arulmigu Balathandayuthpani Temple, also known as the Hilltop Temple, used an ox cart to carry the vel (or holy spear), and a silver chariot for the statue of Lord Murugan, or the Lord of War.

"The new golden chariot is intended to substitute the ox cart and be a most proper vessel to carry the vel; while the silver chariot will keep transporting Lord Murugan's statue as usual," said Ramachandran from his office on the 30th floor of the KOMTAR tower, Penang's highest building. The frown in his forehead reflected the stress of having to manage an event expected to attract 1.5 million people this year.

Ramachandran is determined to deliver a great festival, regardless of the polemics. "As far as I'm concerned, if a golden chariot is not allowed, neither are silver or oxen chariots. Think of driving a car: If one can afford to buy a better one, wouldn't he also be able to drive it on the same roads he was driving his old vehicle?" he said.

The silver chariot is shrouded in other controversies. It was run by a monopoly of five Chettiar trustee families, major moneylenders in the Hindu community, for the past 160 years. Allegations that donations collected from other Tamil families in Penang and Malaysia were repatriated to the Chettiar families' relatives or invested in properties in Chettinad, a region in southeastern Tamil Nadu, are adding fuel to the fire. This year's Thaipusam will be one to remember.

Regardless of the controversies, Thaipusam is a key event for Malaysian Tamils. Malaysia's biggest Hindu religious festival marks the victory of the vel-toting Lord Murugan over the evil Asura (demon) army of Soorapadam. 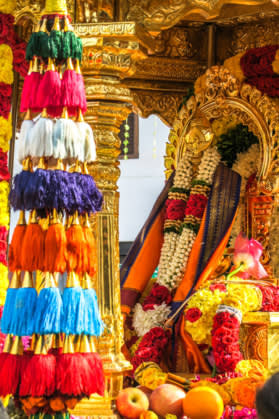 Celebrated by the Tamil community on the day of the Pusam star, Thaipusam is marked in India, Sri Lanka, Mauritius and particularly in Malaysia and Singapore. The 10km processions to Penang's Hilltop Temple and the Batu Caves in Kuala Lumpur are famous for their gruesome ceremonial kavadis (or sacrifices in the form of physical burdens), ranging from the overhead hauling of metal pots filled with milk to bathe Lord Murugan's statue at a temple, to supporting intricate canopies of metal rods over the shoulders, and the piercing of cheeks, tongues and bodies with hooks and skewers -- the symbols of Murugan's vel.

The kavadi is no easy feat, as it requires up to 48 days of fasting, prayer and sleeping at temples before the ritual can take place. It is said that those who conform to the religious rules will enter a trance during kavadis and not feel any pain, and that the vows uttered during the ceremony also fill devotees with an incredible sense of accomplishment. 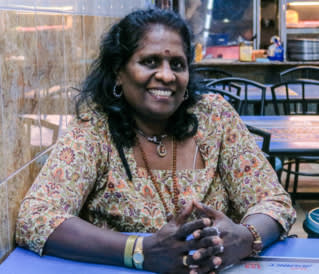 Letchumi R., a lecturer and member of the international Nithyananda spiritual community (Photo by Marco Ferrarese)

"We call it entanglement, a sort of liminal zone between the human and the divine," said Letchumi R., a lecturer and member of the international Nithyananda spiritual community, who is worried that the chariot controversy could shift attention away from the true religious meaning of Thaipusam. "You can call it paranormal, but even if devotees carry their kavadis barefoot for 10km under the scorching sun, in the end, they are left with neither wounds in their bodies or blisters in their feet," she said.

Kuala Lumpur's Aravindan Kamalanathan carried his first kavadi to the Murugan temple of Kuala Selangor in 1999. He is a student and supporter of silambamnillaikalakki, a Dravidian stick-based martial art devoted to Muruguan. "I marched again at the Batu Caves in 2009 and 2010. I had my tongue, cheek and forehead pierced with vel, and again, I just felt a sense of incredible satisfaction after completing each of my three vows," he said.

Among young people, however, participation in the festival may be less of a spiritual affair. "Many participate to make the vow, but it's also true that an equal number goes just for the enjoyment of Thaipusam, releasing the tension of the fasting," said Ramachandran. 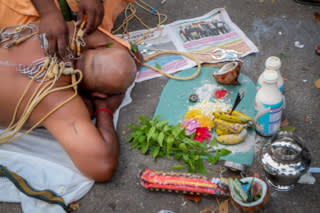 These days, Tamil youth see Thaipusam as a long-awaited occasion to gather and have fun. Many arrive in new clothes, trendy hairstyles and motorbikes or cars that have been tuned up for the event. And even though the Hindu Endowment Board says that it expects respectful behavior and religious music to be played, it is not uncommon to hear Mumbai-inspired pop blaring from speakers all along the way to the Hilltop Temple.

"Maybe the young are still not well-exposed to the history of Thaipusam and the meaning of kavadi, and they need a dose of modernity to really get into its mood. That's why some end up adorning their kavadis with unnecessary symbols, such as Manchester United and Liverpool F.C. flags," said Gina Regina, a 35-year-old Tamil entrepreneur from Kuala Lumpur. 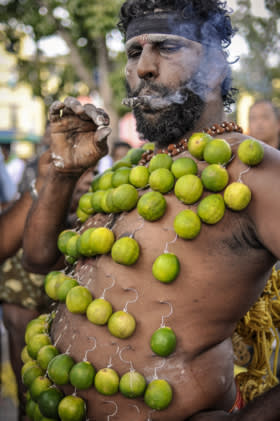 On the other hand, she also mentioned a reduction in the number of big, shocking kavadis in favor of the simplest sacrifice of carrying pots of milk on the head or tied to a wooden pole and borne over the shoulders. "That's the original way as demonstrated in the legend of Idumban, who carried two hills on a rod over his shoulders for Murugan. Maybe a part of our youth is getting back to a more religious culture," she said.

But the festival has also served as the backdrop to gangland troubles. Arasu, a Tamil resident of Ipoh who these days prefers to celebrate Thaipusam away from Penang's or Kuala Lumpur's crowds and with his young family, said that his childhood experiences of Thaipusam in the capital meant "mingling with gang leaders and their tough boys seeking attention. But I stopped going to the Batu Caves because of witnessing a man stabbed to death. His body was left amidst the celebration," he said. Such violence, according to locals, is unusual.

"In Penang, we had minor trouble with gangsters in the past, but now the police do very thorough cleanups ahead of time," said Ramachandran. "This year, all arrangements have been made to increase transport facilities and make a very safe and peaceful Thaipusam. And with the new chariot, I think it will be one of the grandest to date."