Community efforts give new hope for 'ghost of the mountains'

A rare snow leopard sighting in the northern Indian territory of Ladakh. Threatened by climate change and poachers, the big cats are endangered, with only an estimated 3,900 to 6,400 left in the world. (Courtesy of Behzad J. Larry)
MARCO FERRARESE, Contributing writerJuly 30, 2021 09:35 JST | India
CopyCopied

PENANG -- My first and only encounter with the elusive Panthera uncia, better known as the snow leopard, was with a stiff and stuffed creature, wooden eyeballs pitted with bright red and blue glass, hanging from the ceiling of a gompa (Buddhist monastery) at 4,587 meters above sea level in Komik, a small village in the remote Spiti Valley bordering Tibet.

That experience was the opposite of the adventure I had imagined -- locking gazes with the beast in a snowy valley encased by barren peaks. But at least I had seen one, partially satisfying my fascination with the legendary creature.

My long-running attraction to this most enigmatic of wildcats intensified earlier this year with the latest results of an international survey of the elusive cats, the Population Assessment of the World's Snow Leopards (better known as PAWS).

According to the Seattle-based Snow Leopard Trust, founded in 1981 -- the oldest organization dedicated to safeguarding this endangered cat -- there are only 3,900 to 6,400 snow leopards left in the world. For the first time in the four decades since population studies of these high-altitude apex predators began, PAWS aims at calculating a reliable global estimate of snow leopards.

All 12 snow leopard range countries -- Russia, China, Mongolia, Kyrgyzstan, Tajikistan, Kazakhstan, Pakistan, Afghanistan, India, Nepal, Bhutan and Uzbekistan -- are participating in the initiative, but the first results came in March from the northern Indian state of Himachal Pradesh (about 100) and Mongolia (about 1,000, the second-largest number after China), which is the first nation to complete a countrywide assessment of snow leopard distribution and population. A view of the village of Rangdum, in the Zanskar region of Ladakh. (Courtesy of Behzad J. Larry)

Engineered by nature for the cold, snow leopards live above 3,000 meters in the barren mountains and plateaus of heartland Asia. Their 12-cm-thick smoke-colored spotted fur makes them practically invisible in their environment, where they roam alone across thousands of square kilometers to feed and breed. They are often called the "ghosts of the mountains" because they seem to disappear as soon as they are spotted.

Such evanescence, coupled with the lonesome spirituality of the Asian mountains in which they dwell, has given snow leopards a magnetic hold on human imagination. Peter Matthiessen's seminal 1978 book, "The Snow Leopard," mesmerized Western readers by recounting his harrowing (and unsuccessful) 400-km, two-month-long quest in 1973 to find the famed creature. The search took place in the rugged Dolpo region of western Nepal -- the gateway to Shambhala, the mythical kingdom of Hindu and Tibetan traditions; the birthplace of Kalki, the final incarnation of the Hindu god Vishnu; and the home of Maitreya, the future Buddha.

Matthiessen was accompanying field biologist George Schaller, who is now 88 years old, on his mission to study the wild blue sheep that inhabit the high Himalayas. He also hoped to see a wild snow leopard -- a creature so rarely spotted that it seems mythical. Unfortunately, Matthiessen died in 2014 without achieving his dream -- although his book was a bestseller and has been translated into more than 17 languages. 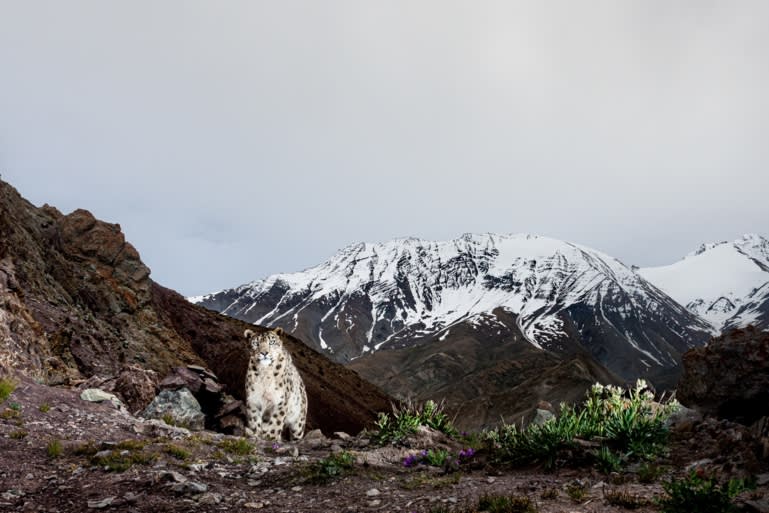 But respect for the mountain ghost dates back much further. The leader of the first Yenisei Kyrgyz Khaganate, a Turkic empire of the 9th and 10th centuries, was called Bars Bek (Sir Snow Leopard). To the Kyrgyz people, ak ilbirs (snow leopards) are both a national animal and a talisman.

The two imaginary snow lions that adorn Tibet's 1912 flag are believed to represent the former nation's many snow leopards. And according to Mongols and southern Siberian ethnic groups like the Khakas, Tuvinians and Altaians, the snow leopard is a terrestrial embodiment of heavenly forces and a guardian of families.

Folklore such as this has helped to create a sense of shared heritage and identity among the 12 countries within the snow leopard's range. In 2013, they signed the Bishkek Declaration on the Conservation of the Snow Leopard, which defined the animal as "an irreplaceable symbol of our nations' natural and cultural heritage and an indicator of the health and sustainability of mountain ecosystems." Since then, Oct. 23 has been celebrated as Snow Leopard Day across the region, and in Bishkek, a life-size snow leopard statue carries an important wake-up call for future generations: "Slowly the snow leopard is disappearing from our mountains. We must all do the best to conserve it."

In 2017, the species was unjustifiably downgraded based on then available numbers from "endangered" to "vulnerable" on the Red List of Threatened Species kept by the International Union for Conservation of Nature.

But snow leopards are still being poached for their fur and bones. Their numbers are also being reduced by habitat loss, trapping, and retaliatory killings when they turn to livestock for prey. Data from the Snow Leopard Trust show that half of the 220 to 450 cats killed every year between 2008 and 2016 were slain by angry farmers. 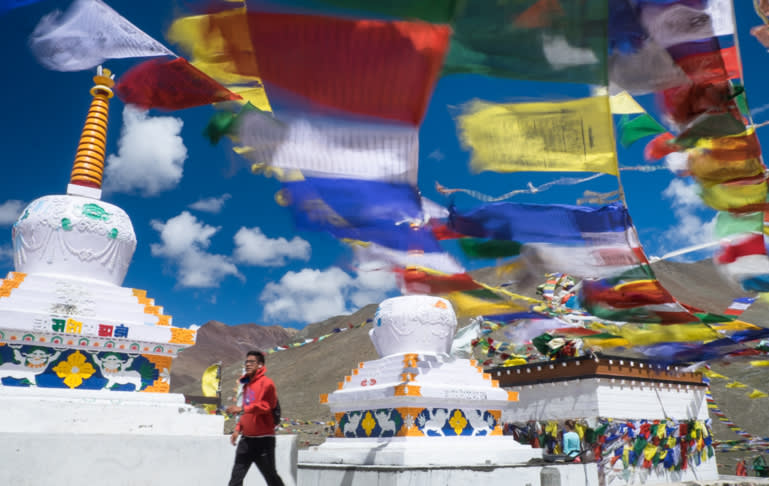 Top: Prayer flags at the Sakya Tangyud monastery in Kaza, a town in the Spiti Valley of northern India's Himachal Pradesh State. (Courtesy of Kit Yeng Chan) Bottom: A snow leopard on the prowl in Ladakh. (Courtesy of Behzad J. Larry)

"The most pressing priority for conservationists must rest with immediate communication and the full participation of villages towards implementing solutions for preventing, or at least reducing, livestock depredation while simultaneously enhancing livelihoods opportunities," Rodney Jackson, founder of the California-based Snow Leopard Conservancy, told Nikkei Asia. Jackson was the first to ever radio-collar and study snow leopards in Nepal in the 1980s. "It will be far more impactful than intensified research into how many snow leopards may exist in any area."

Just as Jackson had hoped, determined campaigning is having an effect. "Community-based conservation initiatives across many range countries have worked with communities and herders to change attitudes and behavior," said Byron Weckworth, Snow Leopard program director for Panthera, a global wild cat conservation organization. "Now, instead of protecting their livestock in retaliation for snow leopard predation by killing the cat, communities protect the species and aim to live side by side." 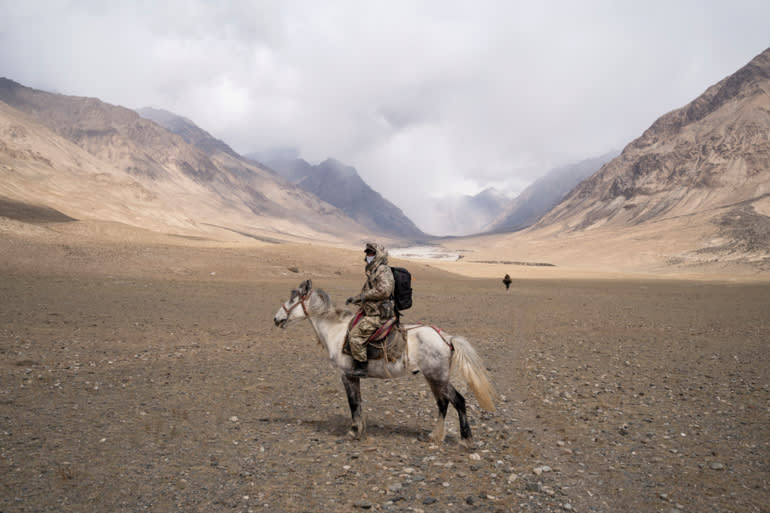 A ranger sits on his horse as he waits for others to join him to retrieve camera traps they set up last year, on May 20 in Issyk Kul, Kyrgyzstan.   © Getty Images

Even though conservation initiatives have led to strengthen conservation and improve the living standard of the mountain communities taking part, "climate change has also been identified as a risk. And of course, one of the still outstanding challenges is to scale these programs up to more and more high-altitude villages across snow leopard range," Noras told Nikkei.

Before COVID-19 crippled the industry, snow leopard-spotting tourism was another helpful tool. "It generates a lot of primary livelihoods," says Behzad J. Larry, CEO of Voygr Expeditions, a U.S.-based company that specializes in snow leopard tours in the north Indian territory of Ladakh and in Kyrgyzstan. "They allow locals to diversify income sources and reduce reliance on shepherding ... which also allows wild sheep and goats, the snow leopard's main prey base, to increase population."

But in tourist-reliant snow leopard range areas such as Ladakh, the prolonged lack of visitors has started to strain the positive relationship between leopards and locals. A big cat in Ladakh. Snow leopard-spotting tourism "generates a lot of primary livelihoods,” says Behzad J. Larry, CEO of Voygr Expeditions, a U.S.-based company that specializes in snow leopard tours in Ladakh and in Kyrgyzstan. COVID-19, however, has crippled the industry. (Courtesy of Behzad J. Larry)

"Conservation here can only work when the locals are just as supporting as the local wildlife department -- and we need [the return of] tourism for that, as it gives them a direct source of livelihood," explained Khenrab Phuntsog, a wildlife guard at Hemis National Park and a prominent Ladakhi snow leopard conservationist. "The good thing is that conservation-focused snow leopard tourism doesn't need huge numbers of visitors."

The tours are expensive, averaging about $4,000 per person for a 10-day tour in 2020, but 20% of the income is earmarked for the High Asia Habitat Fund, which upgrades livestock corrals to make them predator-proof, trains rangers, and engages communities throughout Central Asia in protection measures for the wild cat.

Despite their small numbers, snow leopards have more of a future than they did a decade go, thanks to these initiatives. With luck, future generations will see these ghosts of the mountains living wild in their natural habitat, rather than as examples of high-altitude taxidermy -- like my first unfortunate "sighting" in India.