This rooftop bath lets guests soak while taking in the view of Beitou.

TAIPEI -- Mountain ranges stretch from north to south along Taiwan's main island, with some peaks reaching 3,000 meters above sea level. Located on the Ring of Fire, Taiwan also boasts numerous natural hot springs. The resorts around these hot springs were initially developed by Japan during its colonial rule of the island from 1895 to 1945, and today's visitors can still see traces of that era.

I visited two of Taiwan's major hot-spring spots -- Beitou hot spring in Taipei and Guanziling hot spring, situated in the central-southern region of Taiwan. In addition to warming guests through and through, both spots are famous for their delicious local cuisine. 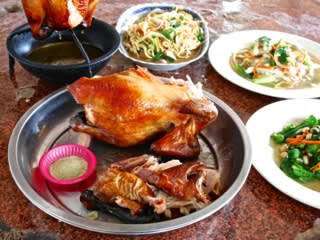 Jar-cooked chicken should be eaten with your fingers, according to Luo Jin-hui, the owner of Guanziling Tea Pot Roast Chicken.

The Beitou hot-spring area, accessible by the Taipei Mass Rapid Transit system, is located in the northern part of the Taiwanese capital, away from the hustle and bustle of the city center. After getting off at Xinbeitou Station, visitors can see the hot-spring town spread out along a gentle, upward slope.

After sovereignty over Taiwan was ceded to Japan following its victory in the Sino-Japanese war in the late 19th century, many Japanese-style hot-spring facilities were built there.

Besides hot springs, the Beitou region is also known as the source of a unique type of radium-containing mineral, called Beitou stone, which is found almost nowhere else in the world. Word of the various therapeutic effects of Beitou's hot springs spread during Japanese colonial times, and the area developed as a hot-spring resort, receiving a visit from then-Japanese Crown Prince Hirohito. More recently, Japanese hot-spring inn Kagaya, located in Japan's Ishikawa Prefecture, made its first foray into the Taiwanese hotel industry by opening a traditional Japanese inn in Beitou.

As I made my way up the slope from the station to Spa Spring Resort, a roughly 15-minute walk, I noticed the smell of sulfur in the air. Along the way, I passed the Beitou Hot Spring Museum, a historical building originally built as a public bathhouse. When I arrived at Spa Spring Resort, I was welcomed by Zheng Yu-june. "In Taiwan, the winter months, when temperatures often fall below 20 C, are the best season to take a hot-spring bath," Zheng said.

The hotel offers a white sulfur spring, said to be good for the skin, as well as a blue sulfur spring, believed to be effective in relieving fatigue. An open-air bath on top of the building offers stunning panoramic views of the surrounding mountains. The hot springs were lukewarm and left the skin a smooth feeling.

Visitors to the hot springs in Taiwan are generally required to wear bathing suits, a rule that initially made me feel uncomfortable. But as I looked up at the clear blue sky and at the plants native to subtropical Taiwan, I gradually began to relax and felt as if I had taken a nice leisurely soak in a spa.

Feeling refreshed after a good bath, I took a taxi to a popular restaurant near the hotel that offers a lamb hot pot. I chose a hot dish because even though Taipei is warmer in winter than Japan, it still gets chilly at night. "Is mutton not commonly eaten in Japan?" asked Ke Tzung-yu, the manager of Sun Yang Zheng Dian Hot Pot. "In Taiwan, mutton is very popular. Some food stalls offer special summer menus featuring mutton, and they also serve it in the winter in hot pots. Eating the meat warms you up." The Beitou Hot Spring Museum was originally a public bathhouse.

Every morning, the manager procures and brings from the middle part of the island a small number of young female sheep between eight and 10 months old. The vegetables used to cook the hot pot, such as cabbage and pumpkin, are all produced in Taiwan. At the table, the vegetables and raw, sliced meat are cooked in the boiling hot pot broth. These foods are eaten with two types of original sauce --- one made from soy sauce, garlic and grated daikon radish and the other from fermented bean curd. The broth is made from lamb bones and Chinese herbs. The quality of these ingredients reflects the careful attention the restaurant pays to their freshness and seasonality.

One top-grade, almost fat-free lamb provides enough meat to serve just six or seven people. I ordered the full hot pot course at 1,200 New Taiwan dollars ($38.04) per person, excluding tax. (The price varies according to the season). During the meal, the manager gave me a tip for cooking the meat: "Take the lamb out of the pot and eat it as soon as the meat turns pink, about a few seconds after submerging it in the broth." There was no specific odor of lamb, and when chewing the meat, hints of sweet flavors spread across my mouth. Fresh and crispy vegetables, as well as the flavors of the Chinese herbs made me feel healthier. I ate everything served, although it was a fairly large meal. The fresh aftertaste really surprised me.

The next morning, I took a stroll around the neighborhood and visited the Beitou Museum, a traditional Japanese-style wooden building. After I reached a public outdoor hot spring where locals enjoy a relaxing soak, I cooked a soft boiled egg in hot-spring steam and tasted it. The deep-rooted hot-spring culture in Beitou made me feel as f I were in Japan. I left the area and headed south to visit Guanziling.

Modeled on Japan's shinkansen bullet train system, the Taiwan High Speed Rail connecting Taipei and Kaohsiung, the second-largest city on the island, started its operation in 2007. I took the train, which has a maximum speed of 300kph, to Chiayi Station. A taxi driver was waiting for guests at the station, and I asked her to take me to the Guanziling hot-spring area. 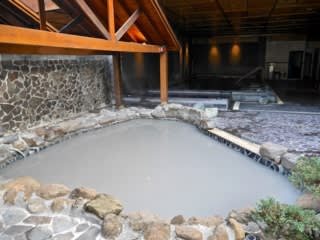 Guests at Reikei Hot Spring Resort can switch between this mud bath and a cold-water pool for maximum effect.

Guanziling, a hot-spring resort in the mountains, is, along with Beitou, one of the four major hot-spring locations in Taiwan. The hot-spring site was first developed around a century ago by the Japanese. Even today, there are many Japanese-style inns with tatami mat floors and roofed corridors, which are similar to those once used in Japan for long-term hot-spring therapy.

I booked a hotel located at a high altitude in a newly developed area. Su Li-ping, the manager of Reikei Hot Spring Resort, said, "This hot spring relaxes the body from within and makes the skin firm and elastic if you alternate between a cold-water pool and the hot spring." Following her advice, I first enjoyed bathing in the warm water of an open-air bath in which a smiling couple wearing swimsuits soaked in a relaxed manner. The weather in Guanziling is milder than in Taipei, with the temperature normally above 10 C, even in winter.

Jar-cooked chicken should be eaten with your fingers, according to Luo Jin-hui, the owner of Guanziling Tea Pot Roast Chicken.

The outdoor area is equipped with a mud-filled bath and a cold-water pool. I submerged myself in the mud, which was smooth to the touch and not unpleasant, before bathing in the cold water. I felt chilled initially but gradually began to warm up while moving back and forth between hot and cold immersion.

On the following day, I went sightseeing in a taxi around Guanziling, which is known as a major fruit and coffee producing area. I got a bag of chemical-free ponkan oranges from a farmer, and after visiting a mountain temple packed with local worshippers, I dropped in at Guanziling Tea Pot Roast Chicken, a popular roast chicken restaurant. Pork and poultry are widely used in Taiwanese cuisine, be it snacks served in food stalls or dishes prepared for festive occasions. In the Guanziling area, poultry production has traditionally been an important source of revenue for local farmers. Around 15 years ago, the region began to see an increase in the number of roast chicken restaurants. At Guanziling Tea Pot Roast Chicken, the birds are roasted in jars one by one.

A row of large tea jars almost 1 meter tall and 1 meter wide were lined up in front of the restaurant. Luo Jin-hui, the restaurant's owner who does perform tea ceremonies as a hobby, placed a special order for these jars to be made from ceramic in order to retain heat longer. Inside each jar, he placed a chicken stuffed with vegetables and Chinese herbs and roasted it for 25 minutes at high temperatures, followed by a final three-minute roast. His work left him drenched in sweat.

"The outside is crispy, and the inside is succulent," he said as he served me a dish of roast chicken. "I would like you to eat this with your fingers." He gave me a pair of gloves. With gloved fingers, I started to gingerly taste the chicken with a golden crust and I found the meat was surprisingly soft. The crisp skin tasted just like Peking duck, and its meat was not greasy but retained a firm and juicy texture. I really loved the chicken, which had exactly the right amount of saltiness, and kept shoving the meat into my mouth.

There are more than 100 hot springs in Taiwan. It is great fun to experience the cultural differences of each region and to feast on delicious local cuisine.