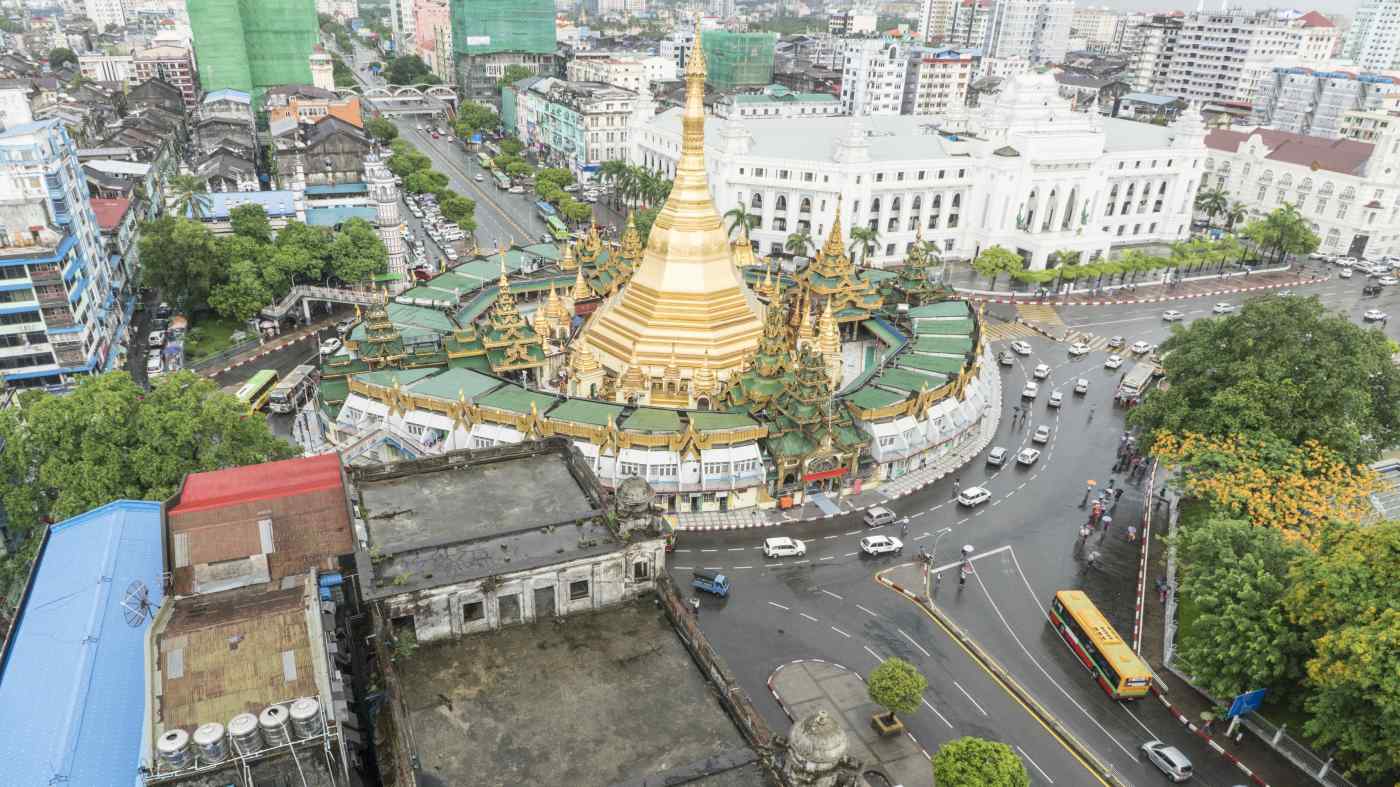 YANGON -- Through a doorway where colonial shoppers once flocked, up several flights of steps and a wrought-iron spiral staircase, there lies one of the most splendid sights in downtown Yangon, Myanmar's biggest city.

Gazing to the left from a panoramic roof terrace, almost within touching distance, is the top of the gleaming Sule Pagoda. Slightly beyond that lies City Hall, and in front of it, the green grass of Maha Bandula Garden, with the twin spires of Immanuel Baptist Church on the far side. Next door stands the ocher bulk of the High Court, and off to the right runs the river Yangon.

"There is no other place in downtown Yangon where you can enjoy this kind of view of the city's colonial heritage," said Harry Wardill, Myanmar country director of Turquoise Mountain, a U.K.-based nongovernmental organization that undertakes the restoration of historic buildings and encourages traditional crafts.

Wardill and his team are more than a year into restoration of the colonial-era Tourist Burma building. The elegant structure was erected in 1905 by an Indian merchant, who called it the Fytche Square Building, and transformed in 1918 by Ba Nyunt, a local businessman, into Yangon's first locally owned department store, the Burmese Favourite Company. In 1920, Ba Nyunt's son Tin New set up the Dagon Magazine Company on the premises, which became a prestigious outlet for local writers.

In 1947, the building was converted for use by the government, initially housing civil servants administering a rations scheme, and eventually passed to the Ministry of Hotels and Tourism, which used the ground floor as a visitor information center called Tourist Burma -- the name by which the building is now generally known. Since 2005 it has been empty and rotting following the government's shift from Yangon, formerly known as Rangoon, to Naypyidaw, the new capital of Myanmar, formerly known as Burma. Back to basics: the ground-floor interior stripped out (Photo by Chiara Luxardo)

The plan now, said Wardill, speaking in a tiny, dusty office in the middle of the three-story structure, is to open the building to local people, as well as to tourists, as soon as restoration is completed in 2019.

Turquoise Mountain plans to site a display center on the ground floor, with a scale model of Yangon that celebrates the city's history as the biggest settlement in colonial Burma from 1824 to 1948 and as the country's capital from independence in 1948 to 2005. The display will also explore how best to breathe life back into the city's once near-derelict colonial heart. 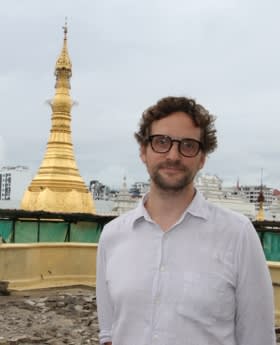 Turquoise Mountain country director for Myanmar Harry Wardill, with the Sule Pagoda in the background (Photo by Ken Barrett)

After many years in which Yangon's matchless collection of colonial architecture seemed destined for terminal decline, the restoration of the Tourist Burma building suggests that supporters of conservation and urban revitalization are making significant progress.

Earlier this year Thant Myint U, chairman of the Yangon Heritage Trust, told a conference that when the trust was founded to promote conservation in 2012, "there was every possibility that Yangon's unique old town would be destroyed. Hundreds of buildings had been torn down and hundreds more were set for demolition."

At the same conference, Phyo Min Thein, chief minister of Yangon region, said that Yangon had the potential to be a "modern and livable economic center of the country while conserving its unique heritage buildings and greenery." He added: "The answer lies in careful and visionary planning that must integrate heritage conservation into every step of preparation and implementation." The Tourist Burma building, immediately before restoration work began (Photo by Chiara Luxardo), and the building under construction at the beginning of the 20th century (Courtesy of Thomas Swales archive)

To encourage people to visit the Tourist Burma building, and to help sustain the project financially, half of the ground floor will be devoted to a food court, selling local cuisine in an informal atmosphere. The upper floors will be leased for office use, possibly by government agencies, but the view from the sweeping roof terrace promises to become one of the city's highlights.

"We felt the roof space is really important, so we proposed a reflective garden on the roof," said Wardill. The space is in the process of being laid out, and the parapet is currently closed off with dust sheeting, but it is not difficult to imagine a year from now an attractive garden for locals and tourists alike to enjoy the view.

Wardill, a structural engineer, said the building was in surprisingly good shape, despite decades of neglect. The structure utilizes load-bearing walls and steel beams, with a series of internal halls, unlike some neighboring buildings that were designed with steel frames and large internal open areas. The architect was Thomas Swales, from South Shields in the north of England, who moved to Yangon in 1903. The prosperous Swales built himself a splendid house and owned Yangon's first motorcar. 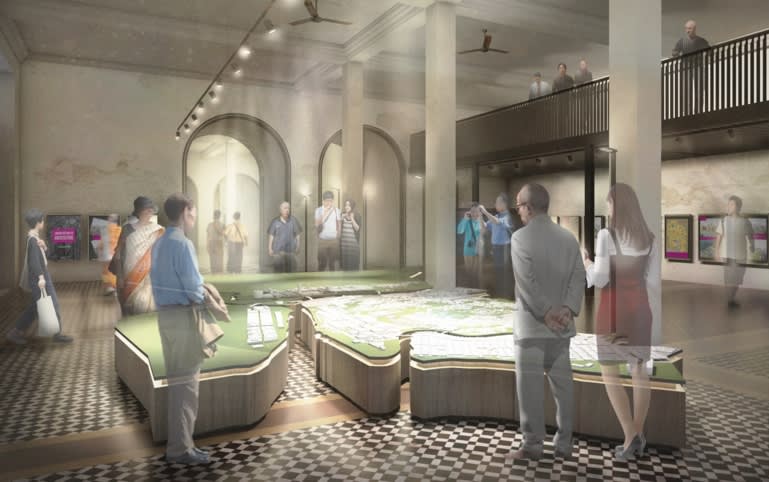 As the restoration of the Tourist Burma building progresses, the fabric is slowly emerging from the effects of decades of official use and neglect. The big windows of the department store, long boarded up, have been revealed, along with large advertisements for British liquor brands painted on the walls of the ground floor. Elsewhere, handsome early 20th century encaustic floor tiles have been uncovered.

Turquoise Mountain arrived in Yangon in 2015 and launched a project with the YHT to renovate an old shophouse and apartment block at 491-501 Merchant Street. The U.K. group, which spent $300,000 renovating the building, has also partnered with Myanmar State Counselor Aung San Suu Kyi's U.S.-based Suu Foundation to preserve and promote traditional Myanmar crafts. Maung Zaw, who worked on the Merchant Street restoration and now leads a team of carpenters (Photo by Nina Hamilton)

Many of those involved in the Tourist Burma project worked on the restoration at Merchant Street, including Maung Zaw, from Myanaung Township, who was then a junior carpenter but now leads a team of carpenters.

"Working at Merchant Street we faced a lot of challenges, because the original master carpenters were extremely highly skilled," he said. "We put in a lot of time and effort to replicate their skills." A key challenge for the team working on the Tourist Burma building is the restoration of a spiral staircase damaged during World War II. "We have a responsibility to maintain and preserve these old buildings," he said. "I've learned a great deal and I feel honored to be here."

The building's long-term future is in the hands of the Yangon regional government, which is discussing with Turquoise Mountain and others how to establish a sustainable finance model to protect the building and secure continued public access. Wardill said one option could be a trust modeled on one that manages Somerset House, overlooking the River Thames in London, which generates its own annual income.

Whatever the final decision, another of Yangon's architectural gems is coming back to life, perhaps paving the way for many more.