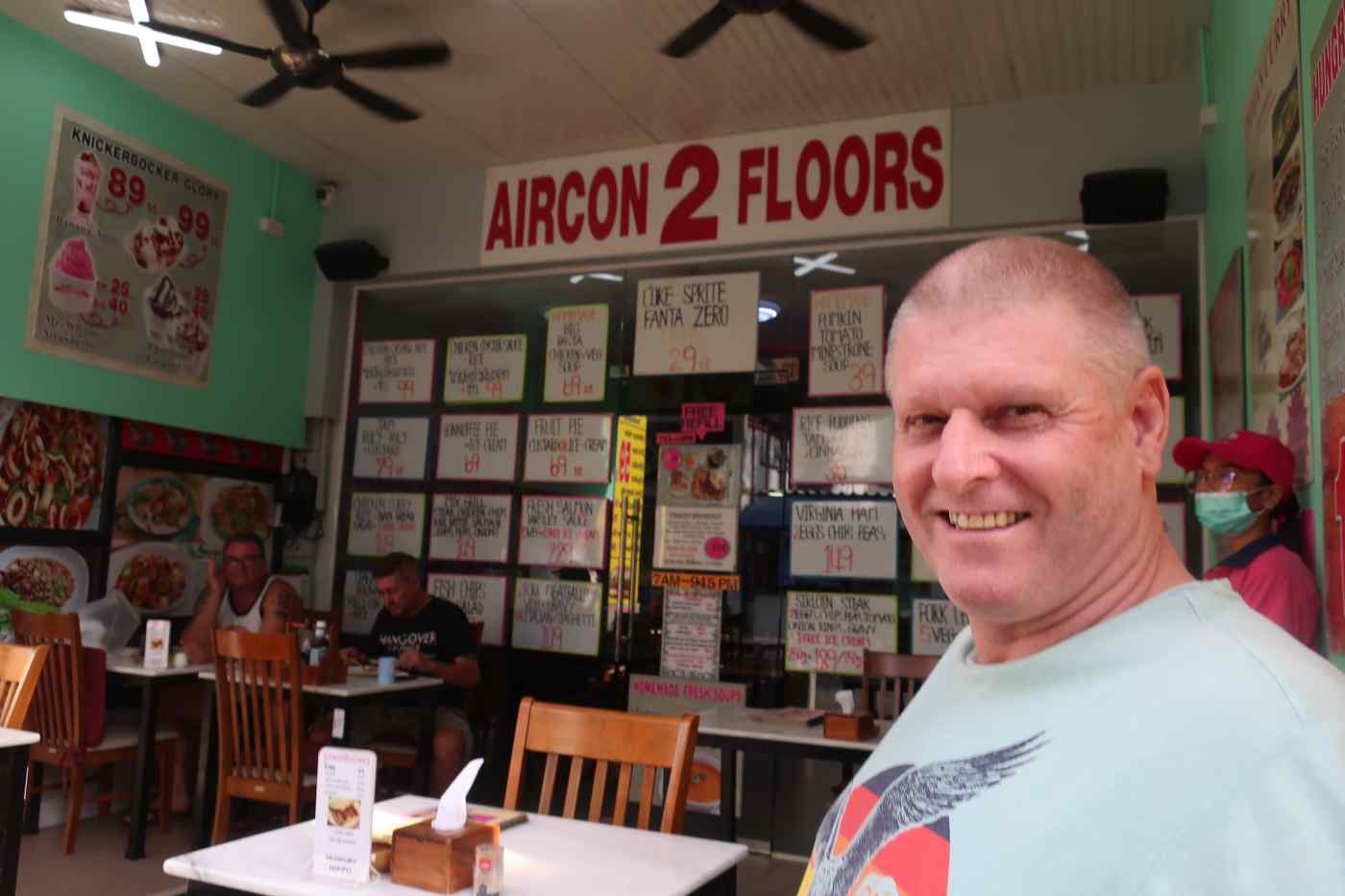 PATTAYA, Thailand -- Hungry Hippo is one of the few food and beverage outlets that remain busy in Pattaya, Thailand's oldest beach resort, which has seen its once-vibrant tourism-driven economy devastated by the COVID-19 pandemic.

More than 70% of Pattaya's bars and restaurants have closed since the first wave of infections hit Thailand in March 2020, forcing the country into lockdowns in April and May. More are likely to follow suit in the second wave, which started in December and has forced containment restrictions in 61 of Thailand's 77 provinces, including Chonburi, which includes Pattaya, 100 km southeast of Bangkok.

This time around, restaurants have been allowed to stay open, even though the COVID-19 restrictions have shuttered the resort's bars and massage parlors and emptied the streets. "They realized that people have to eat," said Robin Ingle, the Welsh proprietor of the Hungry Hippo. "It's been good news for us because with the bars closed we've been busier than ever."

While restaurants this time can stay open, they must refrain from serving alcohol, and are required to observe earlier closing hours, strict social distancing regulations and COVID-19 checks. The decision to allow restaurants to trade came after the Thai Restaurants Association wrote to Prime Minister Prayuth Chan-ocha arguing that the virus had not been spread by the restaurant sector, which has a turnover of 400 billion baht ($13.37 billion) a year and is a major source of employment.

As a follow-up step, the government should be urged to consider a tax break for restaurants to help those left in business to avoid the fate of the thousands that have closed permanently. Besides the culinary delights for which Thailand is famous, such as tom yam kung (spicy shrimp soup) and gai yang (barbecued chicken), restaurants have provided one of the few social outlets available during the pandemic -- especially for single and senior customers. Hungry Hippo, on Buakhao Street, is a gathering place for the lonely. (Photo by Peter Janssen)

"The bulk of our customers are [Westerners] between the ages of 65 and 80, all of them [living] on pensions in currencies that aren't very favorable right now. And now with COVID on top of it, everyone is worried and everyone is watching their pennies," said Ingle, who started Hungry Hippo in 2018. The U.S. dollar, British pound, and Australian dollar have all lost ground against the baht over the last two years, although the local value of the pound has risen slightly since Brexit.

Hungry Hippo offers mainly British and American dishes at low prices, even by Thai standards. For example, daily menus taped to the front window include a roast chicken dinner for 99 baht and pork chop with five vegetables and gravy for 149 baht.

The restaurant is located on Buakhao Street, known for its neon-lit girlie bars, cheap rents and large resident population of Western retirees, primarily from the U.K., the U.S. and Australia. Thailand offers renewable one-year retirement visas to foreigners aged over 50, allowing them to stay long-term in the kingdom if they have 800,000 baht in a Thai bank account or a reliable monthly income of 65,000 baht from abroad. There are an estimated 15,000 foreign retirees in Pattaya, according to police Col. Khemmarin Pissamai, who headed the city's police force until Jan. 1, 2020.

Western retirees can also be found in other Thai beach resorts such as Phuket and Hua Hin, but Pattaya tends to attract a specific demographic -- male, single, and often at the lower end of the expatriate economic scale. "They like the lifestyle here, because the cost of living is cheaper," Khemmarin said. "Most of them are single, living on pensions or retirement benefits which, if they were living in their home countries, would barely cover their expenses, but here they can enjoy a good standard of living." 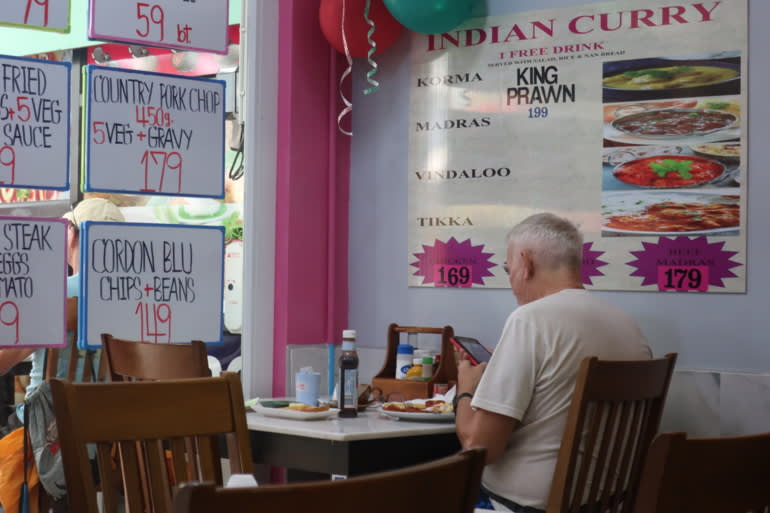 The eclectic menu offers something for everyone. (Photos by Peter Janssen)

The retirees have become a crucial market for the Pattaya economy during the pandemic. About 18 million foreign tourists visited Pattaya in 2019, but almost no foreigners have been allowed into the country since April. Nearly half of the 500,000 Thais who used to work in Pattaya's hotels, bars and restaurants have left to seek work elsewhere, according to Khemmarin.

In 2019, Hungry Hippo was catering to both tourists and retirees, with revenues of about 3 million baht a month and a staff of 40. Now, staff numbers have halved, and revenue is averaging 900,000 baht a month, in spite of price reductions aimed at attracting new customers. But the business remains profitable. "I'm the chef here and I know how to make a profit out of nothing," Ingle said. "No matter how bad it gets I can always reduce prices as long as we've got the numbers coming through the door."

Ingle, 58, spent his youth working in pubs in the U.K., and arrived in Thailand 34 years ago, eventually moving to Pattaya and setting up a half-dozen restaurants. He lived in Nha Trang, Vietnam, between 2011 and 2018, where he operated and then sold three restaurants before moving back to Pattaya to open Hungry Hippo. A gregarious man, he has turned the restaurant into a social club for what he calls the "old boys."

"People meet here for breakfast, dinner and tea," Ingle said. "There are a lot of single men here and they like the company. There are a hell of a lot of lonely guys in Pattaya." Some have been stranded by the pandemic. "A lot of the boys are stuck here. They don't have families. They don't have the revenues to move on, and basically all their friends are here." Hungry Hippo has become a bit of a social hub for Pattaya's retirees. (Courtesy of Hungry Hippo)

"Hungry Hippo is our hub," said Vince, an American who used to manage casinos in Las Vegas. "We come here every morning to catch up on the news." Vince could have retired in Mexico, but chose Pattaya instead. "Rents here are cheap, about $300 a month for a flat, compared with $1,000 in Tijuana (a Mexican city close to the U.S. border), and it's easier to get around here."

British national Paul, a breakfast regular at Hungry Hippo along with his Thai wife, has been living in Pattaya on a retirement visa for years. "Thailand is a nice place to live as long as you have money," he said. "People leave you alone here."

One worry for expat seniors is the prospect of falling ill. Many do not have medical insurance. For the uninsured, the best option is the publicly run Pattaya City Hospital, which has a cash payment system and charges about 30% less than private sector hospitals.

"Foreigners account for about 10% of our clientele, and are a decent source of cash income for the hospital," said Watsan Apiwtanakorn, a hospital executive. "Most of them come here for treatment for road accidents or cardio [cardiovascular] diseases," he said, before joking that "many with Thai girlfriends come here for a broken heart."

While many of the retirees complain about poor treatment by the Thai authorities, especially the immigration police who renew their visas, some Thais acknowledge that the "old boys" are good for the economy. "For Pattaya these retirees are prime customers. They spend their money here," Khemmarin said. "They can be very lovable."