LOS BANOS, Philippines -- Flora De Guzman pops the seal on a vault door, and a blast of dry, frigid air hisses through the gap. Behind the airlock is a room kept at minus 20C, packed with shelf upon shelf of sealed aluminum cans holding one of the world's most undervalued resources -- preserved samples of more than 130,000 varieties of rice.

For the past 40 years, De Guzman has worked here at the gene bank at the International Rice Research Institute in Los Banos. Some of the samples have been here even longer. "We've learned the value of time," she said.

The IRRI, a couple of hours' drive south of Manila, is a uniquely comprehensive library of the genetic diversity of a crop that sustains more than 3 billion people worldwide. Seeds from different strains of rice are collected from all over the world, sorted -- in some cases by hand -- to ensure their purity, and stored in vaults, where they can survive for 50 years or more.

Researchers from the public or private sectors can request samples for a nominal fee, allowing them to crossbreed the institute's varieties with their own. But the vault's mission has taken on a new urgency in the last few years as the changing climate generates more erratic and extreme weather, leaving farmers in dire need of rice varieties that can resist droughts, floods and pests. The genes that correspond to these vital traits are contained within the samples held in the vaults.

"Climate change is the greatest threat to food security. The main problem is that the climate change is faster than plants are able to adapt," said Marie Haga, executive director of the Global Crop Diversity Trust, a Germany-based nonprofit organization that works to preserve crop diversity. "In order for us to feed the world in the time ahead, we need to adapt the main plants that feed us to new circumstances," Haga said. "The diversity of crops in gene banks is the raw material we need to breed plants that can deal with an extreme climate." 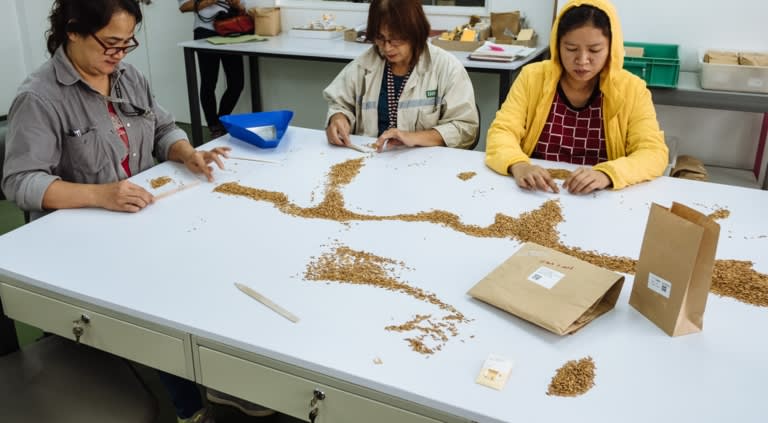 Grains of rice are sorted and examined by hand before they go for storage. (Photo by Peter Guest)

The global scientific consensus is that Earth is now locked in to temperature rises of at least 1.5C above preindustrial levels, unless urgent action is taken. In 2016, governments agreed to take steps to reduce carbon emissions and to prevent further temperature rises above that level, but progress has been slow, and current projections suggest that without dramatic action the world is likely to overshoot the target.

Temperature rises on this scale could have severe implications for the world's staple crops, whose vulnerability stems in part from their homogeneity. These monocultures, as they are known, are the legacy of a so-called "Green Revolution" in the 1960s and 1970s, which was underpinned by the development of varieties of cereal crops that produced high yields and responded well to the application of nitrogen fertilizers. Flora De Guzman, who has worked at the facility for 40 years, oversees its day-to-day operations. (Photo by Peter Guest)

The green revolution varieties were extremely successful, rapidly displacing traditional strains of the same crops. A huge increase in crop production headed off an evolving food crisis across the developing world, and built the foundations of today's agricultural economies in South and Southeast Asia and Latin America. However, the success of the new varieties created new fragilities within the global food system. The crops were well tailored to the conditions they were planted in, but are not well adapted when those conditions change.

Monocultures are also vulnerable to the emergence of new pests, which can spread rapidly through populations that are genetically homogeneous. Nearly 50% of bananas grown worldwide are of the Cavendish variety -- clones of a plant grown in the U.K. in the 19th century. This crop is now under imminent threat from an emergent strain of Panama disease, a fungus that practically wiped out another banana variety, the Gros Michel, in the 1950s. The impact of climate change is already being felt in important rice-growing regions. In Laos, where much of the rice crop is rain-fed, severe droughts have reduced production in recent years. In Bangladesh, heavy flooding washed away huge areas of rice farms in 2017, while coastal regions have suffered from the encroachment of saltwater, which damages crops. In the Mekong Delta, which supports more than half of Vietnam's rice production, yields have been hit by a combination of floods, droughts and saltwater intrusion at various points on the river's length.

Rice breeders have for years tried to create varieties that are resistant to these "abiotic" stresses, such as extreme heat or high salinity. However, ensuring that farmers have the right stress-tolerant varieties at the right moment has become far more difficult because weather patterns have become increasingly unpredictable. 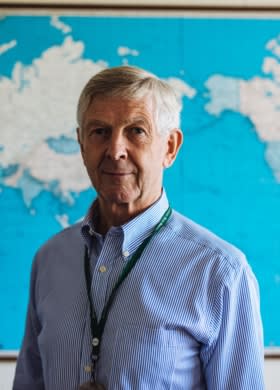 "While in earlier days we have tried to improve varieties to a single stress -- so we had a drought-tolerant variety or a flood tolerant variety -- now we're trying to put several tolerances in one variety, because we realize that one stress doesn't come alone," said Bjoern Ole Sander, a Vietnam-based climate change specialist at the IRRI.

Contained within the samples cooling in the Los Banos rice vault are the traits that will be needed to adapt rice crops to these new conditions, and to make them resilient against future challenges. Ruaraidh Sackville Hamilton, the evolutionary biologist in charge of the gene bank, said climate change is an immediate threat, but the gene bank has to think in terms of decades and even centuries. "It's what economists call option value," Hamilton said.

The worth of that option has become easier to measure in recent years. Gene sequencing techniques have become faster and cheaper, changing the economics of research. The first rice genome sequence cost around $1 billion to compile. Today, a "reasonably good sequence" can cost around $1,000, Hamilton said. "The [fall in the] cost of sequencing has been greater than Moore's Law (the dictum in computer science that every two years, the power of computer processors doubles, while the cost halves)."

This means that researchers have a much greater ability to match genes with specific traits. The gene bank has already sequenced the genomes of 3,000 of its samples, which are referred to as "accessions." If the cost of sequencing falls even more, it may do the same for the entire collection. Short-term storage at the institute's genebank (Photo by Peter Guest)

"Before, it was an almost random decision on what accessions to try and evaluate and see if they had any value, and that was a very difficult process. Now with the 3,000 sequenced genomes it's very easy to collect the data on agronomic value and line that up with the sequence data," Hamilton said

The advent of gene editing, which uses enzymes to modify or insert DNA into a genome, promises to make the process even more efficient, allowing researchers to "prototype" varieties more rapidly to prove that an individual gene corresponds with a particular trait.

"Rather than years and years of different approaches, we come down to a very short period of proving the function of the gene. That's been an impossible thing in the past without huge investment," Hamilton said.

With the harmful effects of climate change already becoming manifest around the world, and with several major economies unwilling to limit the carbon emissions that are driving global warming, the option value of the gene bank has become greater and more obvious. In October, the vault was granted $1.4 million a year funding in perpetuity from the Global Crop Diversity Trust, securing its samples for the foreseeable future and beyond.

"I think it's fair to say that crop diversity is probably one of the most important natural resources, and [yet] it is the least recognized. We've got to do something about that," said Haga.

"We have lost so much genetic material in the last 100 years, so now we cannot afford to lose more. Because for each variety of crop we lose, we lose options for the future."