In the foothills of the Himalayas, and overlooking a 180-degree bend in the Yangtze River, this small town in the southwestern province of Yunnan has been strategically important throughout history for the different civilizations that have laid claim to China.

Today Shigu is often the first stop on a day trip from Lijiang that makes its way up to the 16km-long Tiger Leaping Gorge, one of the deepest gorges in the world. A week before this year's Spring Festival, China's busiest travel season, its streets were lined with red lanterns, its wooden doorways surrounded by hand-written signs ushering in good luck for the new year, which started on Jan. 28.

There are plenty of attractions, including scenic viewpoints above the Yangtze and a rickety iron bridge dating from the Qing Dynasty. But 4km into the mountains lies Stone Drum House, a traditional courtyard home transformed in 2015 into a sustainable guesthouse, with solar-heated water and composting toilets.

Some of the peaks are covered in green. But others are bare of vegetation, their limestone cliff faces showing why Shigu has become increasingly renowned among Chinese and foreign independent travelers as a largely undeveloped center for rock climbing. 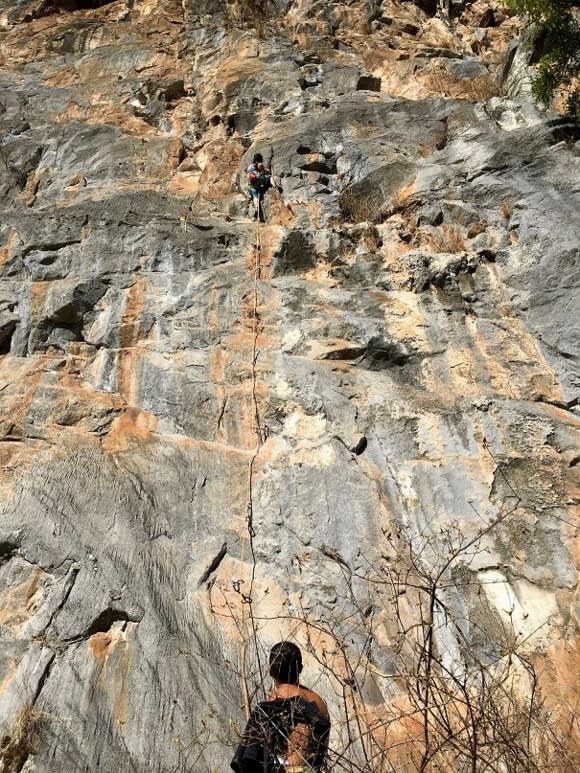 The rocks of Shigu’s mountains are diverse, allowing for a variety of climbing styles and abilities.

Along with their potential for climbing, these awe-inspiring natural landscapes present many opportunities for other adventure and outdoor travel enthusiasts. Shigu has many kilometers of mountain paths leading to remote villages for hikers, trail-runners and bikers, as well as caves -- unexplored except by local farmers -- for the intrepid.

Less well-known than neighboring Kunming, Dali, or Liming -- Yunnan province's more established climbing areas (and some of China's best) -- Shigu's mountains are nevertheless spectacular. Rising over 3,000 meters into Yunnan's clouds (Yunnan means "South of the Clouds" in Chinese), the rock is diverse, allowing for a variety of climbing styles and abilities.

There are tall, slabby routes where the lava-like rock is studded with tiny holes and jagged edges dangerous to unsuspecting fingers, and overhanging climbs up stalactite-like structures known as tufas. Other routes feature thin cracks requiring climbers to jam fingers or fists into crevices, slowly raising themselves up. And there are caves where climbers are forced to move horizontally, suspending themselves by their arms and the tips of their toes, as well as "multi-pitch" routes -- long climbs requiring several stops to re-anchor ropes along the way.

Most climbs end with unspoiled views of mountains stretching to the horizon, deep valleys dotted with settlements, terraced hills for farming, winding creeks and irrigation canals, and clear blue skies that are treasured by Chinese visitors because of their rarity in much of urban China.

There are currently more than 170 climbs, meticulously developed by local and visiting climbers who have identified potential routes, cleared them of brush and loose rock, attached stainless steel anchors for climbers' ropes, and tested for safety and difficulty levels. Additional cliff faces around the valley are still being developed; more routes are being set weekly.

According to the China Business Journal, Chinese domestic tourism is growing at a rate of 16% a year and is projected to be worth $615 billion a year by 2020. Many visitors still head to cultural destinations like Old Town Lijiang, named a UNESCO World Heritage Site in 1997 and heavily commercialized since. But there is also a small but growing market for independent travelers -- specifically, outdoor and adventure enthusiasts.

In many ways, these visitors are following a well-worn path of interest. Chinese travelers have always appreciated the outdoors, as attested by the amount of ancient poetry and art featuring natural landscapes, and the popularity of tourist sites such as Shigu's First Bend of the Yangtze River and Tiger Leaping Gorge. This appreciation has increased in recent years as China's air pollution problem has worsened. Many urban dwellers leave the city behind, especially in the winter months, when air quality is at its worst.

While there has always been an interest in the outdoors, the surge of interest in activity-based adventure travel is a new phenomenon, driven by increasing incomes and growing leisure time, especially among China's younger generation. The increase in Chinese outbound tourism has also boosted the influence of international travel norms, including adventure sports.

Social media plays an important role, according to Peng Yue, a Yunnan native, guesthouse owner, and member of several local outdoor activity associations. "I share pictures from Cangshan (a mountain above Dali City), and people ask if I have traveled outside the country. They don't realize that we have such landscapes right here," he said.

For Ming Ma, a climber from China's northeast who fitted anchor bolts on several local routes, Shigu has the ideal conditions for climbing: "It is the right temperature, has a lot of diverse rock, great natural scenery, and is still undeveloped," he said.

Ma is confident about the potential of the sport in this area. He is looking for a local house to convert into more accommodation, to join the two already available -- Stone Drum House and the Shigu Climbing Base Camp further down the valley. A third is currently being renovated.

Already, demand for rooms is outstripping supply. Two visitors from Guizhou Province, who had been in the climbing area for more than a month, said they were heading to Shigu town during the busiest three days of the Spring Festival because their room in the mountains had been booked by other travelers. They said they would be back as soon as possible.