Saving the historic Excelsior tops the bill in Yangon Hollywood star Douglas Fairbanks was accustomed to adulation, but even he was overwhelmed by the reception when he arrived in Yangon, then called Rangoon, in March 1931. Douglas Fairbanks in his final film, The Private Life of Don Juan (1934)

Fairbanks, who was on a tour through Asia, was in Burma, now Myanmar, on his way to India. He checked into the famous Strand Hotel and was immediately besieged by crowds of fans who had camped outside and eventually burst into the lobby.

Hotel staff managed to clear them out and lock the doors, but Fairbanks must have felt uneasy when a little later he ventured out to the Excelsior Theatre, where he was the star attraction of a performance to raise funds for the Shwedagon Pagoda, which had been severely damaged by fire.

Once again the fans surged, but the police were better prepared and formed a cordon. Fairbanks got through the crowds, entered the theatre, presented a fulsome speech in praise of the city and its people, and then left, unscathed.

The episode was a moment of glory for the Excelsior, which had opened only a few years earlier as a live performance venue. It was also a moment of revelation. Soon, the Excelsior was better known as a cinema than as a live theater.

Apart from being the classiest movie house in Yangon, it had one other enormous advantage: location. The Excelsior is sited directly opposite the rear entrance to Yangon's main railway station, on what was Montgomery Street and is now Bogyoke Road. From the Yangon suburbs, the crowds poured in to see the latest films, and the Excelsior became the city's premier movie house.

Many of Yangon's cinemas were destroyed during World War II, but immediately after the war, when the city's straggling suburban railway lines were connected to form the Circular Railway, there was an extraordinary boom in the construction of new cinemas, most of them built in the Art Deco style that was popular at the time. he Excelsior circa 1950. The film being shown, Bathing Beauty, was a 1944 Hollywood musical, filmed in Technicolor and starring Red Skelton, Basil Rathbone and Esther Williams. (Courtesy of Dr. Thant Myint-U of Yangon Heritage Trust)

Along a short stretch of Bogyoke Road, from the Pansodan Road junction to the junction with Sule Pagoda Road and the railway line, a dozen cinemas were packed side-by-side with the Excelsior to cater for the huge audiences that the railway brought in.

Couples, families, groups of youngsters, and lone cinema buffs were able to ride into town on cheap train tickets, select a movie from the abundance on offer, and probably take in a meal in nearby Indiatown or Chinatown before going home.

This stretch of cinemas was the densest anywhere in Asia, and it became known as Cinema Row.

It was not just Hollywood films that these customers were going to see. Myanmar's first film, made by Burma Film and entitled Love and Liquor, was screened in 1920. By the time Fairbanks arrived there was a flourishing domestic film industry, led by the A1 Film Company, whose 30-acre studio was dubbed "Burma's Hollywood."

The 1950s was a golden age, with newly built cinemas screening Burmese productions from newly opened studios that were struggling to meet insatiable demand. There were films from Kolkata (then Calcutta) and Mumbai (then Bombay), and from Vietnam, Cambodia, Malaysia, Shanghai and Hong Kong.

In 2016 the doors were locked on the Excelsior. By then it was called the Waziya. The 1920s Beaux Arts exterior, with its massive covered entrance and Ionic columns, was scuffed and faded. The interior was shabby, the projection equipment woefully outdated.

Cinema Row was a series of rubble-strewn building sites, together with a couple of mid-1990s tower blocks. Of the multiple cinemas that once graced the area, only the Nay Pyi Taw and the Shae Saung, around the corner in Sule Pagoda Road, and the Thamada, a northern outpost on the other side of the rail tracks, remained in business. 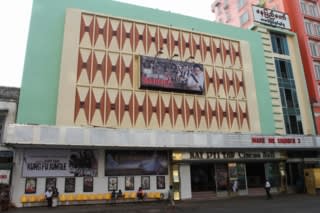 The Nay Pyi Taw, in Sule Pagoda Road, is one of only three Cinema Row movie houses still functioning. (Photo by Ken Barrett)

The Excelsior seemed likely to follow most of its companions into rubble. Cinema-going habits have changed, and movie houses are a soft target in land-hungry downtown Yangon. Happily, however, the Excelsior's star is shining once more.

The Yangon Heritage Trust, which has emerged as a powerful conservation force in the city, identified the Excelsior several years ago as a building of historical and cultural importance.

The YHT joined with the Myanmar Motion Picture Association, a nongovernmental organization representing the film industry that had been granted the lease on the building by owners the Ministry of Information. They began to devise a plan that would preserve the structure and transform the Excelsior into a modern entertainment center presenting live performances, films, and public events.

The U.S. embassy also became involved, working with the YHT, MMPA and the information ministry, and in 2015 the embassy arranged for a theater renovation specialist named Jim Reigle to spend several weeks in Yangon, working specifically on the Excelsior.

Reigle is director of historic preservation at Martinez + Johnson Architecture, a Washington D.C. architectural practice that specializes in theater restoration. M + J devised a management plan for the restoration intended to conserve the structure's historic and cultural significance.

"In our work with historic theaters, we usually try to incorporate modern theater technology as a means to create viable, flexible houses for the widest array of performance product and assembly uses," said M + J principal Thomas Johnson.

"At the Waziya, we proposed restoring the audience chamber, utilizing the ancillary spaces for patron and performer support, and almost rebuilding the stage house, the enclosure above and around the stage, in a modernization effort. 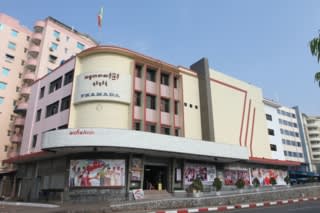 The Thamada, on the other side of the railway line, was the northern outpost of Cinema Row. (Photo by Ken Barrett)

"The existing stage house has fairly low technological systems as the Waziya has always primarily been a movie house for both the Myanmar and American motion picture industry. We would improve cinema capabilities, incorporating digital technology as well as older equipment, but also make the stage house function efficiently and effectively for musical, dance, and legitimate theater performances. This would involve integrating new lighting and sound equipment and new theatrical rigging for performance."

Last year the YHT restored a century-old row of shophouses on nearby Merchant Street, which helped to promote craft skills such as decorative lime plasterwork restoration, brickwork conservation, architectural carpentry, traditional clay tile roofing, and archival heritage photography. These will now be employed at the Excelsior.

"The trades at the Waziya involve everything from masonry restoration and concrete consolidation to the repair and addition of decorative wood screens, louvers and windows, and, in our discussions, we have always shared a preference for the involvement of local craftsmen and materials such as those involved with Merchant Street," said Johnson.

"The technical equipment would most likely come from outside the country, but the installers and coordinators could certainly be from Myanmar." A probable name for the reopened cinema is the Waziya Red Carpet Theater.

The demise of Cinema Row was perhaps inevitable, given the changing habits of the movie viewing public, but its decline was accelerated by a military coup in 1962, led by General Ne Win, whose socialist regime nationalized the movie industry in 1968.

Meddling in story themes and script approval followed, but corruption allowed the industry to flourish for a few more years until 1972, when the government directed filmmakers to promote the socialist agenda. Audiences dwindled.

After the brutal crushing of Myanmar's pro-democracy movement in 1988, and the tightening of the military's grip on power, sanctions imposed by Western nations made it difficult for Myanmar to obtain film equipment and stock. Privatization of the industry followed, in an attempt to make it viable, but the government retained a major role in production. 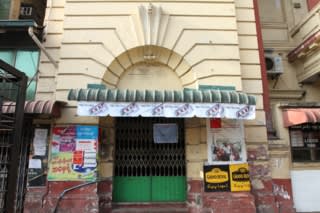 Compounding the industry's problems, digital technology allowed people to watch old and imported films on DVD at home for a fraction of the cost of going to see new films. Cinemas were meanwhile unable to invest in new audio-visual technology, and the movie houses closed. There are now only about 50 operating cinemas in Myanmar, according to industry estimates.

Douglas Fairbanks had arrived in Yangon at the start of a new era, but also at the end of an old one. He had been one of the greatest stars of the Hollywood silent screen, a swashbuckler and romantic hero. But in 1927 the talkies had arrived.

Fairbanks made his last silent film, The Iron Mask, in 1929; in an attempt to catch the new wave there were two brief speeches on a soundtrack, but although Fairbanks was a classically trained actor, his stagey, posturing style did not transfer well to the new medium.

By 1931 he was on his way out. He was 48, and looked it. His tour through Asia was for a travelogue named Around The World In 80 Minutes. An absorbing cultural artefact today, it bombed when it was released in America at the end of the year.

Two years later the greatest celebrity marriage of the era ended when Fairbanks and the actress Mary Pickford divorced. By the end of 1939, having made a handful of lackluster talkies, Fairbanks was dead from a heart attack. Today, he is remembered only by cinema buffs. The Excelsior, however, will live on.