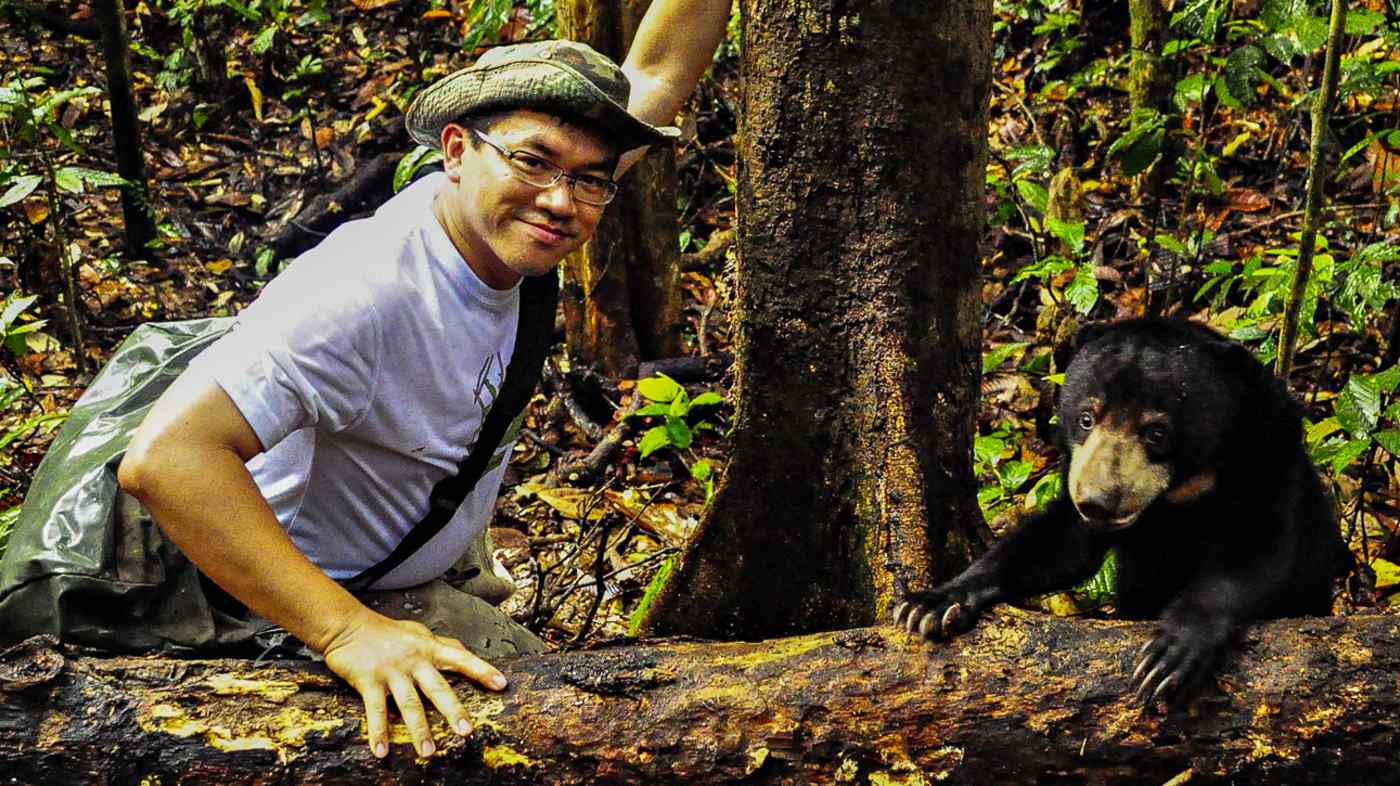 SANDAKAN, Malaysia -- Early in April, news filtered out from Riau, on the Indonesian island of Sumatra, that a group of hunters had captured four sun bears, three of which they killed and cooked to make rendang, a popular curry dish in Indonesia and Malaysia.

The report shocked Southeast Asian conservationists, who see the fight to save the sun bear as one of the region's top animal protection priorities. But a conservation program based in Sandakan, in Sabah, one of two Malaysian states on the island of Borneo, is making notable progress toward saving the world's smallest bear.

"When we were informed, it was too late to save the fourth sun bear in Riau. But I'm proud to say that at least in Sabah, where we operate, there has been a significant change in sun bear conservation," said Wong Siew Te, founder of the Bornean Sun Bear Conservation Center.

The sun bear, which takes its name from a circular patch of golden fur on its chest, is a target for poachers because of its bile, which is highly prized in Asian traditional medicine, and its paws, which are regarded by some as a culinary delicacy. Its rainforest habitat has also been severely damaged by logging and economic development.

Sun bears live in the remaining patches of jungle which stretch from the eastern tip of the Indian subcontinent to the southeastern tip of China and across Southeast Asia to Sumatra and Borneo. The exact number remaining in the wild is not known. Sun bears live in a forested enclosure that gives them chances to practice basic forest skills such as climbing. (Photo by Kit Yeng Chan)

Wong, a Malaysian wildlife biologist who began studying sun bears in 1998, set up the sun bear center in 2008, next to a patch of rainforest near the Sepilok Orangutan Rehabilitation Center, a well-known conservation project about 20km west of Sandakan's waterfront.

"When I founded BSBCC 10 years ago, locals were still keeping sun bears as pets, or displaying them in mini zoos and crocodile farms. But currently, all of the captive sun bears that we know of in Sabah are safe and sound at our center," recalled Wong.

The center opened to the public in 2014 after six years of hustling to collect the funds needed to build the forested enclosure, which currently hosts 42 sun bears. Over the last decade, four have been released, eight died from natural causes, one was killed by a snake bite, and one escaped and was never found.

"More than half the bears currently in the center cannot be released in the forest because we rescued them as captive adults, after they lost their natural instincts for climbing trees and being in the wild, or became permanently handicapped because of their previous owner's bad husbandry," said Wong. "The little cubs, on the contrary, have been through our re-adaptation process and developed good forest survival skills. Once they become adults, they will be the first generation to prove whether or not our methods work." 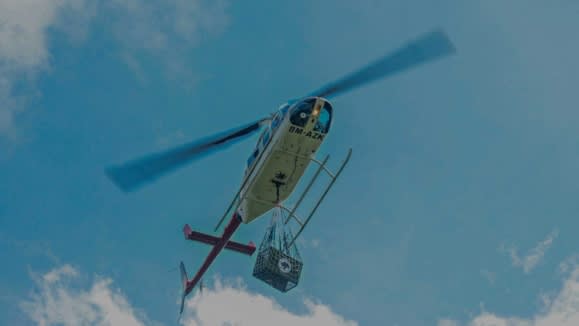 A helicopter is used to transport sun bears to remote parts of the forest for release. (Courtesy of Wong Siew Te)

After a decade of trial and error, and encouraged by the tourists who flock to the center, Wong and his team are adding ecotourism, community education, anti-poaching and captive breeding activities to the original rescue program. "The areas are all interrelated, and the overall success depends on each one of them," said Wong.

However successful the center, the sun bears' main problem remains humans operating in their wild habitat. "We can't release any more bears knowing that, like it happened in Riau, there are still people who want to hunt and eat them, or kill them to sell their bile and paws," Wong said grimly.

In a drive to combat this problem, the center's staff are increasingly working outside the Sepilok enclosure, educating locals to respect the local wildlife and treasure the long-lasting effects of environmental conservation, rather than destroying the sun bears' habitat for quick gains.

Wong began working with KOBEST, a grassroots cooperative based in the village of Kampung Bestaria, next to the Telupid forest reserve. "We want to make locals understand the value of the natural resources they have in their own backyards, and train them to start low-impact ecotourism activities to increase their incomes to the point [where] they won't have to harvest or poach from the forest any more," he said. "In doing so, there will also be more eyes and ears in the jungle, to help protect it from further poaching and illegal activities."

Wong also believes that if locals can keep making money from the forest, they will value it more. "Sad to say, to them, clean air and water means nothing. They are very poor households and need money to support their families. If we can train them to not become poachers, this will also directly impact the sun bears' survival, because the tourists, in the end, want to see forests teeming with wildlife." 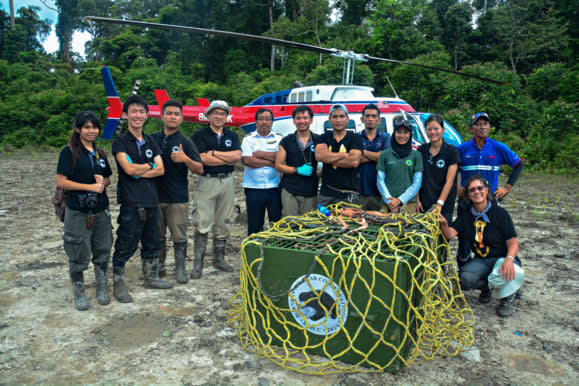 Even bears bred in captivity could potentially be released into rainforest environments that meet the species' basic survival requirements, Wong said. "The bears can only be found in big reserves without human population," he added. "A forest needs to be pristine and large enough for the sun bear population to reproduce and propagate. We are very lucky to have a forest enclosure at the BSBCC, where the bears can at least grow free into nature."

Besides the Telupid reserve, which is still too fragmented because of earlier logging, Wong is assessing several other possible sites for releasing bears. Fortunately, Sabah retains big chunks of lowland tropical dipterocarp forests that have remained free from human intervention. The Tabin Wildlife Reserve, for example, covers more than 1,200 sq. km -- nearly twice the size of Singapore.

To the west and in central Sabah lie the Danum Valley, Maliau Basin and Imbak Canyon conservation areas. "These big ecosystems are all interconnected by jungle corridors, and, most important, still have no humans. If we can keep protecting these forests from being turned into agriculture land or housing areas, we won't just have some perfect ecosystems for the sun bears, but also for many other endemic species," said Wong.

The center is also studying Pitas, one of two northeastern peninsulas in Sabah, where sun bears have survived despite a relatively high-density human population, widespread logging and the introduction of acacia plantations in the 1980s.

"The acacia blooms twice a year, meaning it attracts bees, and consequently beehives, whose honey feeds the bears," said Wong. "Mangrove areas nearby have also provided plants the bears can feed on. It's an interesting site, but without control and education, hunting and poaching could destroy the whole bear population. Once again, the first step to the welfare of the animals is community conservation."

The sun bear center is also considering opening a new enclosure in Bukit Lawang, in northern Sumatra. But persuading local people to value long-term, sustainable resources over a fast return is a tough battle. "I'm not sure what new threats we will face in the next five to 10 years," said Wong, "but when the time comes we will ... find new and effective ways to protect these animals."