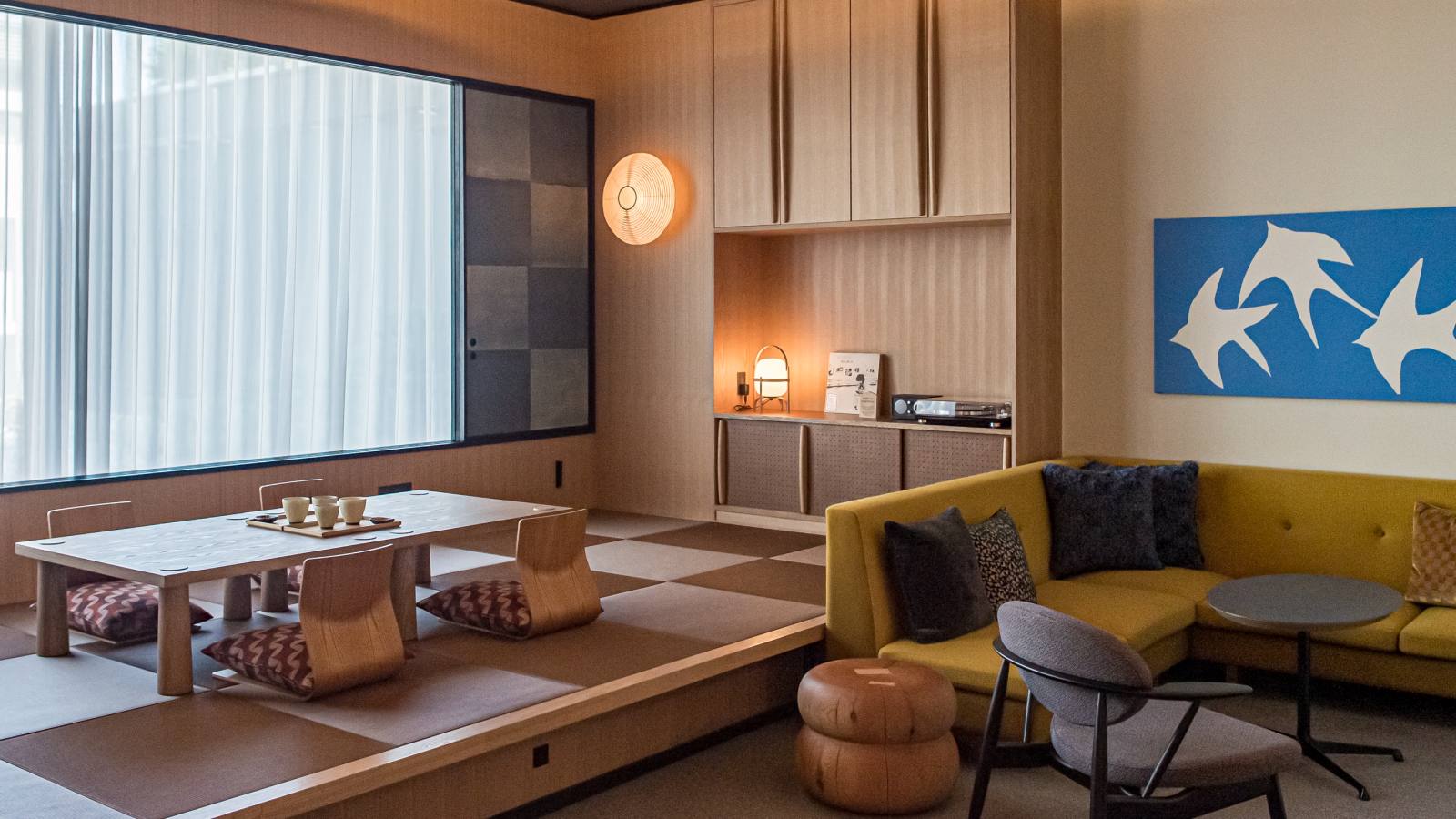 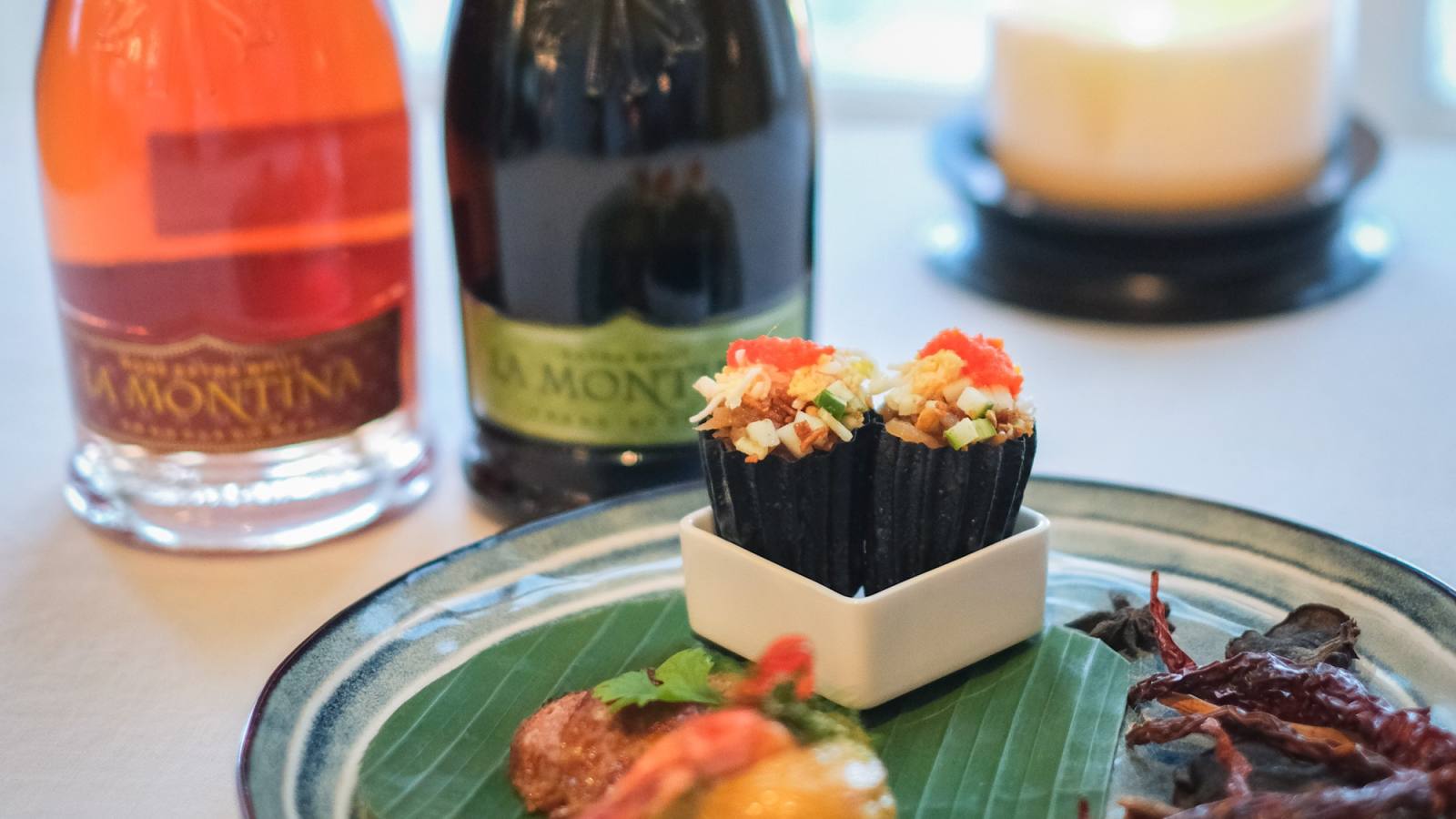 Sayonara, Tokyo: Still amazing after all these years TOKYO -- A Sunday afternoon walk on Omotesando, the tree-lined street known as the Champs Elysees of Tokyo, is as good an opportunity as any to see the city’s residents at play.

When my wife Anna and I left the Japanese capital after a five-year posting in the early 1990s, Omotesando at the weekend was an uptight fashion show. Women wore immaculately tailored outfits, mostly navy blue. Men donned linen jackets and pressed trousers. High heels and sharp creases were part of the uniform. So were pearls.

Returning after more than 25 years we have seen a transformation: suits, heels and pearls are gone. In their place have come T-shirts, jeans and trainers. Mikimoto is out. Designer grunge and Uniqlo are in.

The shifting Omotesando dress code is a mirror of Japan’s upheaval in the time that we were away. One of the developed world’s youngest populations has dramatically become the oldest. Meanwhile, a financial crisis, a property price collapse and long economic stagnation have kept Japanese pay levels depressingly flat for more than two decades, making people feel poor and diluting the desire to dress to impress.

And yet, the view on Omotesando is anything but dull. We look closer and see that the crowds still throb with energy and style. The care that once went into looking formal now goes into everything from plastic jewellery to jazzy fingernails and makeup (for men as well as women). Cosplay -- appearing in public as characters from anime films or manga cartoons -- is done with greater attention to detail than perhaps anywhere else. And it is now more than a decade since Tokyo overtook Paris as home to the largest number of Michelin-starred restaurants, including a dozen within a taxi ride of Omotesando. 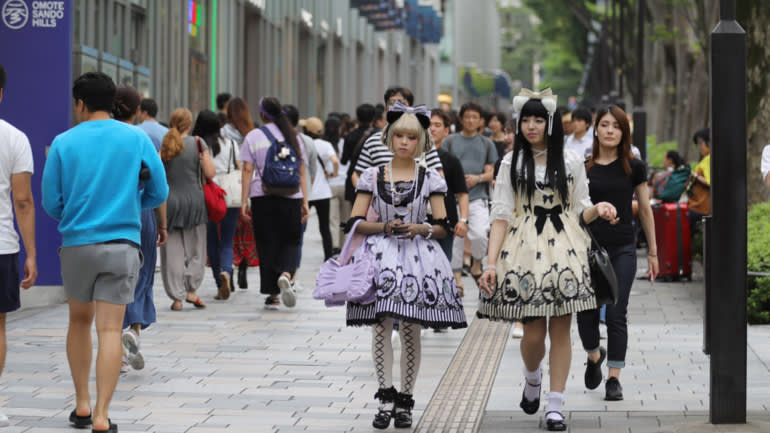 Japan’s capital is also drawing foreigners as never before, especially Chinese and other Asians for whom Tokyo is the Asian city that works. The civic virtues that we admired three decades ago thrive -- politeness, negligible crime rates, quality public transport and super-clean streets. It is not uncommon to see tourists photographing a rare piece of rubbish like an exotic butterfly.

The resident foreign population has more than doubled in 25 years to around 4% of Tokyo’s total, bringing in Chinese, Koreans, Vietnamese and Indians, plus a plethora of cheap non-Japanese eateries. Our neighborhood in western Tokyo has three Nepalese restaurants, two Italians and a Korean. In the early 1990s, it was hard to find even an authentic pizzeria outside the Yamanote train line that rings the inner city.

A welcome relaxation of import rules has allowed a flood of foreign food and drink. When we last lived in Tokyo, cheese was a luxury. Not only was it expensive, it was seldom stocked in supermarkets because many Japanese hated the smell. We were sometimes so desperate that we bought tinned Camembert (yes, it's a thing). Today, good cheese is not only imported but also produced in Japan, even in the capital -- a local shop sells Tokyo-made mozzarella and burrata. And then there is coffee -- 25 years ago outside the metropolitan center, it was available mostly in cans from vending machines. Today, Starbucks is everywhere, and gourmet single-estate cold-drip brews are commonplace.

Prices have plunged since the bubble era. Not only for housing -- where apartment prices are a third lower than the bubble’s peak even after a recent recovery -- but also in retail. In the early 1990s, a widely held belief that products made in Asia outside Japan was substandard helped limit imports, especially from China. Today, it is no trouble to find a 100 yen store -- the equivalent of Dollar Tree in the U.S. or Britain's Poundland. The old snobbery toward shopping cheaply has gone. For some, the 100 yen store has even become a way of life -- a chance to personalize your existence at low cost, for example via kitchenware, cars, and even fingernails.

So, there has never been an easier time for foreigners to live in Tokyo. But at the same time, the Japanese capital has lost little of its intrinsic Japanese-ness. For many outsiders, Japan remains an alien country, with some of its inhabitants still convinced -- in spite of the evidence -- of their biological difference from the rest of the world. It is a rare country where white people can experience xenophobia, for example with Japanese leaving the seats next to a foreigner empty in an otherwise busy train. There are hotels that decline a foreign reservation, even from a Japanese speaker.

In work, the proverbial iron discipline has rusted around the edges, with the working week shrinking as Saturday duty has faded away in the big corporations dominating Tokyo. But the job -- reinforced by loyalty to colleagues -- still comes first. Japanese workers continue to take only around half their 20 days’ annual holiday entitlement -- about the same as three decades ago.

Moreover, despite the developers’ bulldozers, Tokyo clings to its myriad traditional small neighborhoods, bringing a human scale to life in the metropolis. Near our home, as elsewhere, the owners of shops and eateries clustered around the commuter railway station, mark festivals with decorations from New Year in winter to Bon -- the commemoration of ancestral spirits -- in high summer. 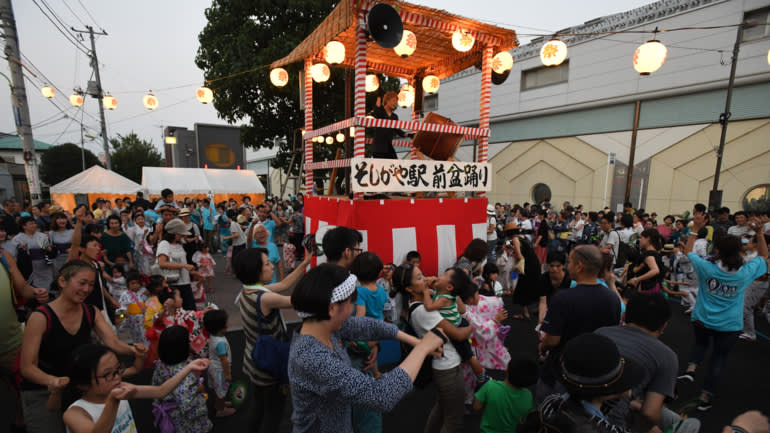 Our neighborhood association runs play groups, judo classes and a lunch club for the (many) elderly. Residents still regularly sweep the streets outside their homes, especially when the leaves fall. Nobody is too grand for this: I recall the late Kazuko Aso, our former neighbor in the early 1990s, doing so. Then in her late 70s, the daughter of a former prime minister, wife of a wealthy industrialist and mother of the current finance minister unfailingly took up her broom each autumn.

None of the vitality buzzing through Tokyo contradicts the sense of national stagnation that has robbed Japan of its political and economic confidence.

The days of Japan as No. 1, a country set to overtake the U.S. in economic terms, are dead. In place of pride, there is caution.

The country has aged faster than any other major industrialized economy -- in the late 1980s, it had the youngest population of the G-7 nations. Now it has more people aged 65 or over than any other. Japan has also drawn in on itself, with, for example, fewer students studying abroad than 25 years ago, in an age when other countries have the uptake of such places multiply. Spoken English remains an uncommon skill. 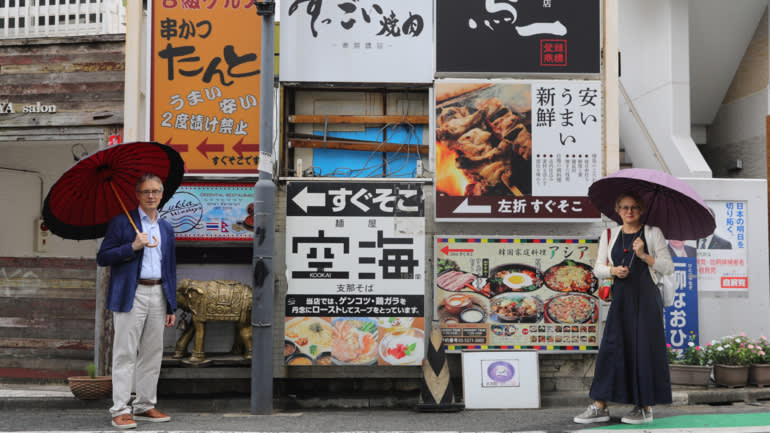 The U.S. remains, in Japanese eyes, the half-friendly bully it was a generation ago. But a far bigger concern has emerged in the shape of China, the overwhelmingly large and increasingly belligerent neighbor. “We have strategic anxiety,” is the catchword in the foreign ministry.

Even the world’s largest government debt mountain, much of it invested in pharaonic building programs, has not reawakened the animal spirits of a nation that once astounded the globe. Japan still manufactures precision machines that we want, not least cars. But the tech frontier has moved -- worryingly -- to China.

The pressures have been compounded by the shadow cast by the 2011 tsunami and Fukushima nuclear disaster. The traditional faith in authority -- prominent 30 years ago -- has been profoundly shaken.

All this worry ultimately translates even into the clothes people wear, including in Omotesano. Shuzo Ishidera, executive manager of Hakuhodo Institute of Life and Living, a market research unit, says, “Interest in expensive fashions has declined because people don’t have money and have realized that all that dressing up doesn’t mean very much. The tsunami strengthened these feelings.” 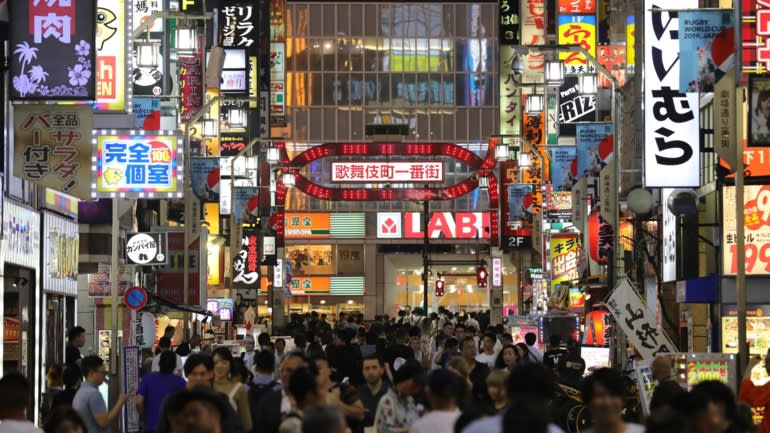 The bright lights of Kabukicho: Tokyo's population is aging, but the city still throbs with vitality. (Photo by Ken Kobayashi)

But if Tokyo rises above the national negativity, it is for one fundamental reason: population. As elsewhere in Japan, school rolls have plunged and old age care has boomed. But Tokyo’s population has grown despite the overall decline -- from 11.9 million in 1990 to 13.5 million.

Tokyo is stripping young people from smaller towns and the countryside. For some this is a tragedy, as rural Japan, the repository of memories and tradition dies away, along with the abandoned paddy fields. For others, urban concentration is a rational reaction to the demographic predicament.

Tokyo is expanding its infrastructure for its new residents. I rather expected that there would be less new construction than in the property boom three decades ago. Not a bit of it. With the help of liberal public funding, there are new motorways, railways, offices and housing complexes. In 1990, the opening of the 48-floor Tokyo government headquarters was a wonder in a city where earthquake fears had restricted skyscrapers. Today, they are normal. So, fortunately, are public toilets: A rarity three decades ago, they meet a need that somehow went unrecognized for far too long. 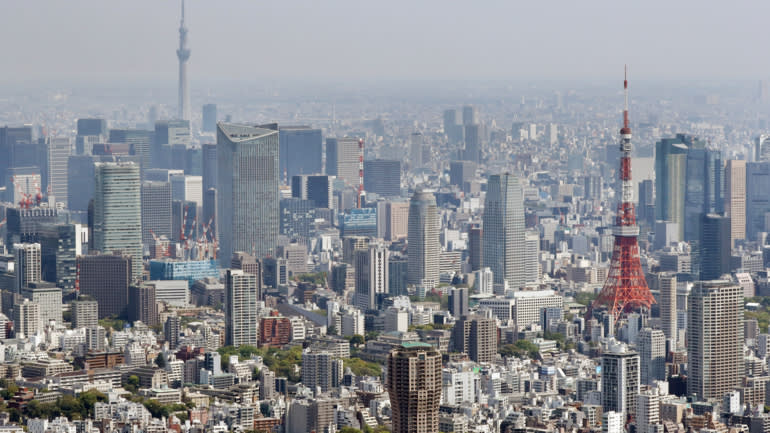 The skyline of a mega-metropolis (Photo by Kosaku Mimura)

And yet, even Tokyo is haunted by demographic challenge. Its citizens’ confidence undermined by the national malaise, young people put off romance, marriage and children. Instead, they increasingly stay with their parents into their 40s or live alone, with many dedicating themselves to an internet existence, even more than Western peers.

Others have developed a peculiar line in pets -- small dogs that are treated like babies. I was shocked the first time I glanced into a pram to see not a child but a pooch nestling in the white bedding. There are dog restaurants, beauty salons and hotels (for when your little charge gets too much for you).

“It may look like a sick society in Western eyes,” says Professor Masahiro Yamada of Chuo University, a doyen of Japanese sociology. “But staying single or remaining childless as a couple is a very practical reaction to reality.” Some Japanese couples cosset their dogs like babies. (Photo by Ken Kobayashi)

The long-term economic optimism that once encouraged couples to get together and have babies, even in cramped flats, has evaporated. Yamada says young people prefer to “enjoy their lives.” His research shows such people are not unhappy as “they like to live with few obligations.”

For those worried about the terminal decline of Japan this is seriously disturbing. But such concerns have not yet robbed Tokyo of its unique take on urban life. We loved it 25 years ago, and we love it now.

Stefan Wagstyl recently returned to the U.K. after completing a two-year assignment as commentary editor of the Nikkei Asian Review.