Single-track lines are spectacular, but only the military travels well THAZI, Myanmar -- It is 6:30 a.m. and a small group of tourists has gathered at the ticket office at Thazi Railway Station in Myanmar, formerly known as Burma. Most of the tourists are going to Shwe Nyaung, the station closest to the world-famous Inle Lake, but my journey will take me only as far as a former British colonial hill station at Kalaw.

Thazi is a junction town, on the main line between Yangon and Mandalay, with most tourists staying just one night. The branch line to Shwe Nyaung via Kalaw, built by the British after World War I, has stood the test of time, offering travelers a slow, meandering but scenic trip to their destination. Like most tourists, I am traveling in Upper Class. The fare for the 6.5-hour trip to Kalaw is a mere 1,850 kyats ($1.22).

The early morning mist hangs low in the valleys as we leave Thazi just after 7 a.m., passing through dry rice paddies before heading into the verdant jungle-clad hills. Our first major stop is at the village of Hklaingdet. At the station the white painted stones and the antiquated apparatus for changing the signals recall the colonial origins of the line.

The 2,000-horsepower locomotive, DF.2014, was manufactured by Alstom, a French company, and is quite old. It carries the standard livery of Myanma Railways -- cream, blue stripe and brown -- and hauls just four passenger coaches (two Upper Class and two Ordinary Class) with two small freight vans at the rear. The passenger coaches are comfortable, but not luxurious. Ordinary Class for this journey is fitted with blue plastic seats, which are much preferred to the hard wooden seats so often found in other Ordinary Class carriages. Upper Class seats, fitted out with brown vinyl, are more comfortable. Most local Myanmar people are traveling in Ordinary Class and some in Upper Class, many wearing traditional headdresses. The train works its way slowly up into the Shan Hills, with regular stops at small stations where we can stretch our legs for a few minutes. Food vendors ply their wares, and one elderly woman, her face covered in traditional thanaka paste made from ground bark, balances a tray of small green bananas on her head, and a tray of sliced yellow fruit with her left hand.

We continue climbing into the Shan Hills, with the jungle on either side brushing against the carriages. The windows are open, and passengers need to be careful to avoid being hit by bushes as the train heads through the at-times thick foliage.

Two switchbacks, or zigzags, are highlights of the trip, built by British railway engineers to overcome the steep gradients. At 10:50 a.m. we reach the aptly named Zit Zat Reverse (A) station, with a complicated set of red and yellow levers to control train movements in the zigzag section.

A second zigzag awaits at Hkywe Yok station, 924 meters above sea level, where a station building from another era has weeds growing from its roof. At Hkywe Yok a young Shan mother, her face daubed with thanaka, holds her baby in her arms. The baby also has decorative swirls of thanaka on his young inquisitive face.

The summit beckons, and a sign near the track proudly proclaims "4608 FT. ABOVE SEA LEVEL" (1,404 meters). We are 1,191 meters higher than where we began our journey at Thazi, which lies 213 meters above sea level. A mock Tudor-style station at Kalaw (Photo by Lindsay Stubbs)

The descent to Kalaw begins, and one more treat is in store: the flower sellers at Myin Daik. We reach the station just 10 minutes after passing the summit, and locomotive DF.2010 is waiting with a passenger train headed for Thazi. The line is single track, and trains can pass only at stations such as this.

The two trains pull up alongside each other and Myanmar women, their arms full of colorful flowers or with large bunches balanced on their heads, hurry up and down between the trains. A young woman with an aluminum tray of sliced water melon balanced on her head tries to tempt the passengers in Ordinary Class. The vendors' time is short, for once our train arrives both trains can be on their way. 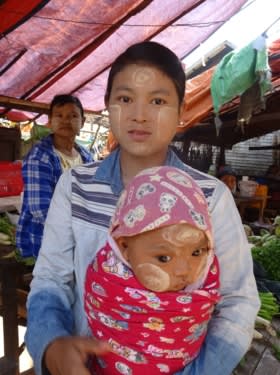 A young Shan girl, her face decorated with thanaka paste, holds her baby in her arms at Hkywe Yok Station. (Photo by Lindsay Stubbs)

And so we descend toward Kalaw, with its mock Tudor-style station. At 1,310 meters above sea level, Kalaw is a former British hill station -- a retreat for colonial administrators seeking to escape the heat in the then capital, known by the British as Rangoon, but today renamed Yangon. Today Kalaw is the site of a military base, and a kicking-off point for backpackers making the two- or three-day trek through the jungle to Inle Lake.

My relaxing two-day stay at Kalaw is at a traditional English-style hotel, the Eastern Paradise, owned and managed by Ma Than and her young Shan staff. But there is a darker side to my break, for on the next day I see a military train at Kalaw Station, waiting for a train from Thazi to arrive before it can continue on its way. Locomotive DF.2086 is brand new, a gift from the Chinese People's Liberation Army to the Tatmadaw, Myanmar's military.

Aung San Suu Kyi, Myanmar's State Counselor and head of the National League for Democracy administration, is the leader of this nation of more than 51 million people, but under the constitution, the military wields sweeping powers independently of the elected government. Four Myanma Railways passenger trains pass through Kalaw each day, hauled by old locomotives of the DF.2000 class. When I was there, the service from Thazi to Loikaw was running 3.5 hours late because its aging locomotive, DF.2001 (also manufactured by Alstom), had broken down. By contrast, the military train with its modern locomotive was hauling five new freight wagons, also a gift from the Chinese.

The first railway line in Myanmar was built by the British in 1877 from Yangon to Pyay (then known as Prome), 259km to the northwest, on the banks of the Irrawaddy River. There, passengers could join an Irrawaddy Flotilla steamer heading north. The British built a 1,000mm gauge system which today stretches from Dawei in the south to Myitkyina in the north, and east via branch lines to Lashio and Shwe Nyaung. 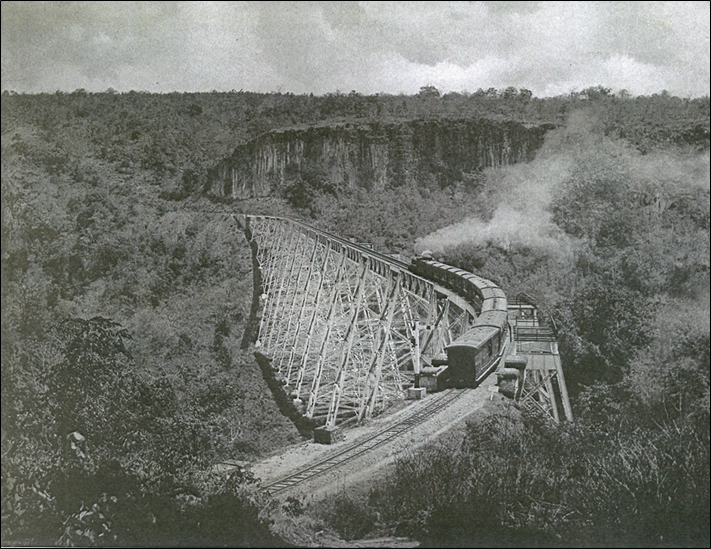 The Gokteik Viaduct in Shan State, in the early 1900s

In the west there is a poorly built line running down the west bank of the Irrawaddy to Pathein. The Gokteik Viaduct on the line to Lashio, built in 1902 by Pennsylvania Steel of the U.S., is one of the railway wonders of the world, and a must-see for any railway enthusiast visiting Myanmar today.

But Myanma Railways is facing a dilemma. Its network of nearly 8,000km of track is in poor shape. For example, passengers to Mawlamyine (formerly Moulmein), about 160km southeast of Yangon, suffer as carriages bounce on the track. This is due to poor ballasting and the narrow track. Neighboring Indian Railways, which has one of the largest rail networks in the world, uses a broad gauge (1,676mm), and most developed countries use standard gauge (1,435mm).

Many of the locomotives and passenger coaches are old. Not surprisingly, passenger numbers have been falling: from 76 million in 2008 to 46.5 million for the year to March 31, 2018. Neglect and poor maintenance are the proximate causes, together with growing competition from cars and buses.

But the underlying reason is that too much of the national budget is spent on the military, which controls its own expenses, while areas such as education, health and railways are poorly funded. Until the military returns to barracks, the outlook for Myanmar's railways is poor. The network may be in poor shape, but it offers an excellent illustration of the difficulties that face Suu Kyi and the NLD government.