HUNTER VALLEY, Australia -- In summer when temperatures often soar above 40 degrees Celsius for days on end, the hillside grapevines of the Hunter Valley, 150 km north of Sydney, are heavy with fruit.

Grape pickers -- often young overseas visitors eager to boost their holiday funds -- move into the fields before dawn to begin their backbreaking work. They will earn about 25 Australian dollars ($17.7) an hour, working between five and eight hours a day.

Summertime grape picking is just one part of the Australian wine industry's long production chain, which begins with the first buds in spring before moving through harvesting, crushing and pressing the grapes to fermentation, aging, bottling and distribution. It ends months -- or sometimes years -- later with consumers in Europe, North America and Asia sipping full-bodied red wines or crisp, chilled whites.

Throughout the world, the goal of winemakers is to make the best possible wine from the available resources. In Australia, for some wine aficionados, the quest for a "perfect" Aussie red starts in the Hunter Valley, a region in the eastern state of New South Wales that has been growing grapes for almost 200 years. The valley's combination of hillside volcanic soil, hot climate and available water gives it a unique place in the winemaking industry.

Here, 150 vineyards offer a choice of red and white wines that ranges from affordable to outstanding. An example is the current New South Wales wine of the year, the 2017 Old Paddock and Old Hill shiraz from Mount Pleasant vineyard. Rated 97 out of 100 by Australian wine expert James Halliday, it has 40 years of drinking life and sells for a modest AU$50 a bottle. Adrian Sparks, Mount Pleasant's chief winemaker, believes the 2018 vintage -- to be released this year -- will be what he terms "a superior product."

For something more quaffable on a daily basis, the McGuigan Black Label Hunter Valley red, priced at AU$15, is a favorite among the valley's annual 10 million day-trippers and overnight visitors. McGuigan has been rated international winemaker of the year four times since 2009. (Photo by Geoff Hiscock)

These visitors, many from China, Japan and India, are drawn to the Hunter not just by the wine, but by a series of popular food events and outdoor music performances that range from the modest picnic atmosphere of "jazz in the vines" through to opera, Shakespearean plays, country and western music and high-voltage rock concerts from headline acts which have featured names such as Elton John, The Rolling Stones, The Eagles and Fleetwood Mac.

Weekend food markets, an array of acclaimed restaurants, day spas, wedding venues, golf courses and accommodation ranging from budget caravan parks to luxury resorts provide the backup services that keep visitors returning and spending. Options for getting around the valley include hop-on hop-off bus services, hire bikes or the leisurely style of a horse and carriage. 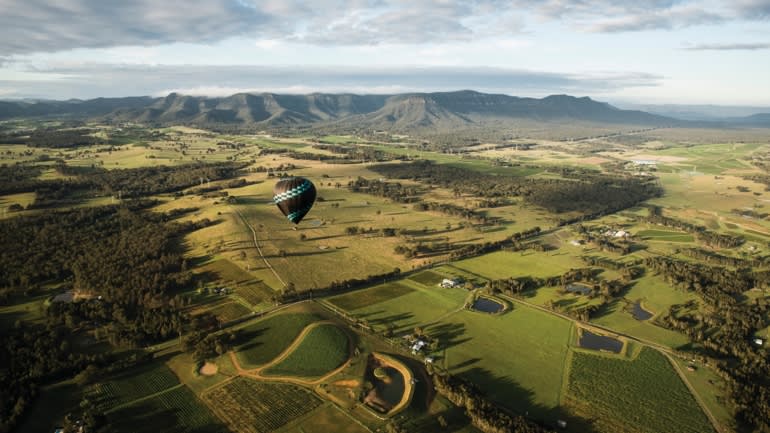 Wine buffs with a thirst for historically significant wines can buy Tyrrell's 2007 Vat 9 Hunter shiraz for AU$175, or the 2016 vintage (the latest) for AU$85. This wine is made by a family with a vineyard connection that goes back to 1858, when Edward Tyrrell took up land beneath the Brokenback Range. His first vintage was produced in 1864, and five generations of Tyrrells have since worked to build a wine brand that is known internationally. Some wine purists argue that the Adelaide Hills/Barossa Valley region in the state of South Australia is the place to go for a perfect Australian red. The state has specialized in heavyweight red wines, with a rare bottle (one of only 20 left) of Penfolds Grange from the original 1951 vintage selling for more than AU$80,000 at a Langton's auction in December 2018. The 2014 Grange (the most recent) sells for about AU$800.

For those who might balk at such prices, a range of affordable and high-quality red wine is available from scores of competitors in the Yarra Valley in the state of Victoria, the Tamar Valley in Tasmania, Margaret River in Western Australia and the Coonawarra region in South Australia. 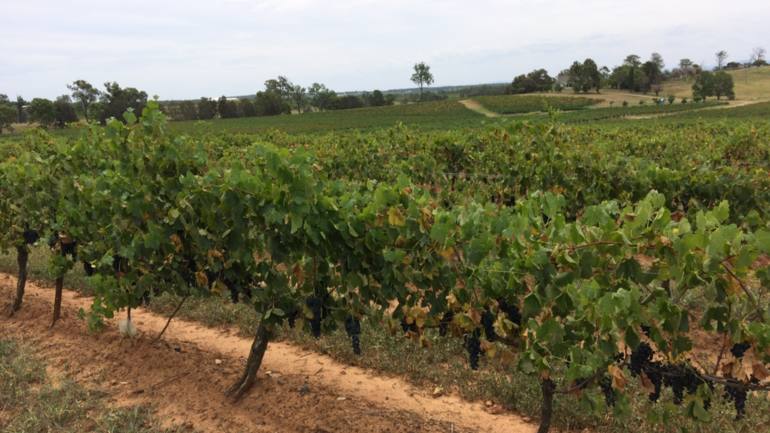 Not all red wine roads end in Australia, of course. At the latest Six Nations Wine Challenge in Sydney, featuring 600 "New World" wines from Australia, Canada, Chile, New Zealand, South Africa and the U.S., the trophies for shiraz and pinot noir went to Canadian and New Zealand entrants. And at the 2018 Asia Wine Trophy in South Korea, a 2014 cabernet sauvignon from the Columbia Valley in America's Washington State won "best in show" red.

In the all-important Chinese market, Australian wine is perceived as "value for money" rather than "expensive/fine," according to research by London-based international wine consultancy Wine Intelligence. A similar perception prevails in the U.S. market.

Sydney-based international wine judge Denis Gastin told the Nikkei Asian Review that Chinese consumers have traditionally associated red wine with France, but a growing band of "experimental" drinkers was enjoying the fruitier taste of Australia. Gastin said every wine producing country had its own expression, based on climate and signature varieties, such as malbec in Argentina and carmenere in Chile. "I see Australia as the continent of shiraz," he said. Peterson Wines claims it has the best aged reds in the Hunter Valley. (Photo by Geoff Hiscock)

The epicenter of modern Hunter Valley wine production is the Pokolbin area, where a spur of Australia's Great Dividing Range, the country's highest mountain chain, frames the vineyards of some of the valley's best-known wine families -- the Tyrrell and McGuigan families are here, as well as the Draytons, Tullochs, McWilliams and Petersons. For decades they have been producing award-winning wines -- primarily using shiraz and semillon grapes, but also cabernet sauvignon, chardonnay, verdelho and sauvignon blanc.

While white wines have an honored place in the Hunter Valley, there is no mistaking what is on offer at Stephen Drayton's Ivanhoe vineyard at Pokolbin, where a sign near the cellar door entrance proudly proclaims "Big Gutsy Reds." The first vines were planted on Ivanhoe Hill in 1855, and most of the winery's vines are more than 50 years old. That makes them low-yielding, but also delivers intense flavors and rich color. 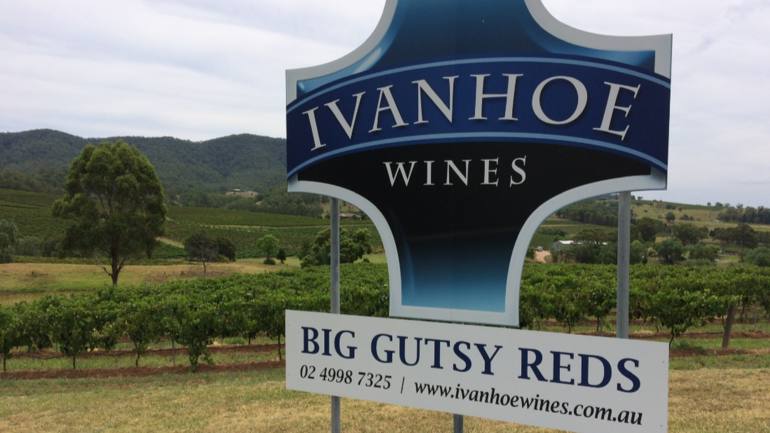 A short drive away, at one of the Peterson family's vineyards on Broke Road, the entrance sign boldly announces the "Best Aged Reds in the Valley." It is a contestable claim, but one that the winery's many visitors are happy to endorse after trying Peterson's 2014 IHP Shiraz, priced at AU$120.

Mount Pleasant, which lies a few kilometers west of the city of Cessnock, is where Maurice O'Shea, a master blender who studied oenology at France's Montpellier University, planted his first vines in 1921 -- including a pinot noir variety now regarded as a regional "mother vine." O'Shea, regarded as the father of modern winemaking in Australia, joined forces with the McWilliam family, who bought a half share of Mount Pleasant in 1932.

O'Shea's winemaking skills and his use of oak casks produced red wines noted for their flavor, intensity and longevity. By the time O'Shea died in 1956 at the age of 59, his pioneering work had ensured that Mount Pleasant vineyard would continue with many national and international triumphs.

Sparks, now the keeper of the O'Shea legacy, believes Hunter Valley shiraz is "truly unique." Old vines, smaller crops and early ripening delivered by a warm climate produce medium-bodied wines with an "incredible ability to age like no other region in Australia," Sparks said. Weather-wise, the grapes that will provide the 2019 vintage have had "almost the perfect lead-up."

Wine is not the only reason to visit the Hunter, but a drive through the valley's fields delivers a scent of wine history at almost every turn.