Singapore chefs go back to the future

The island state's culinary masters are preserving and reinventing their heritage 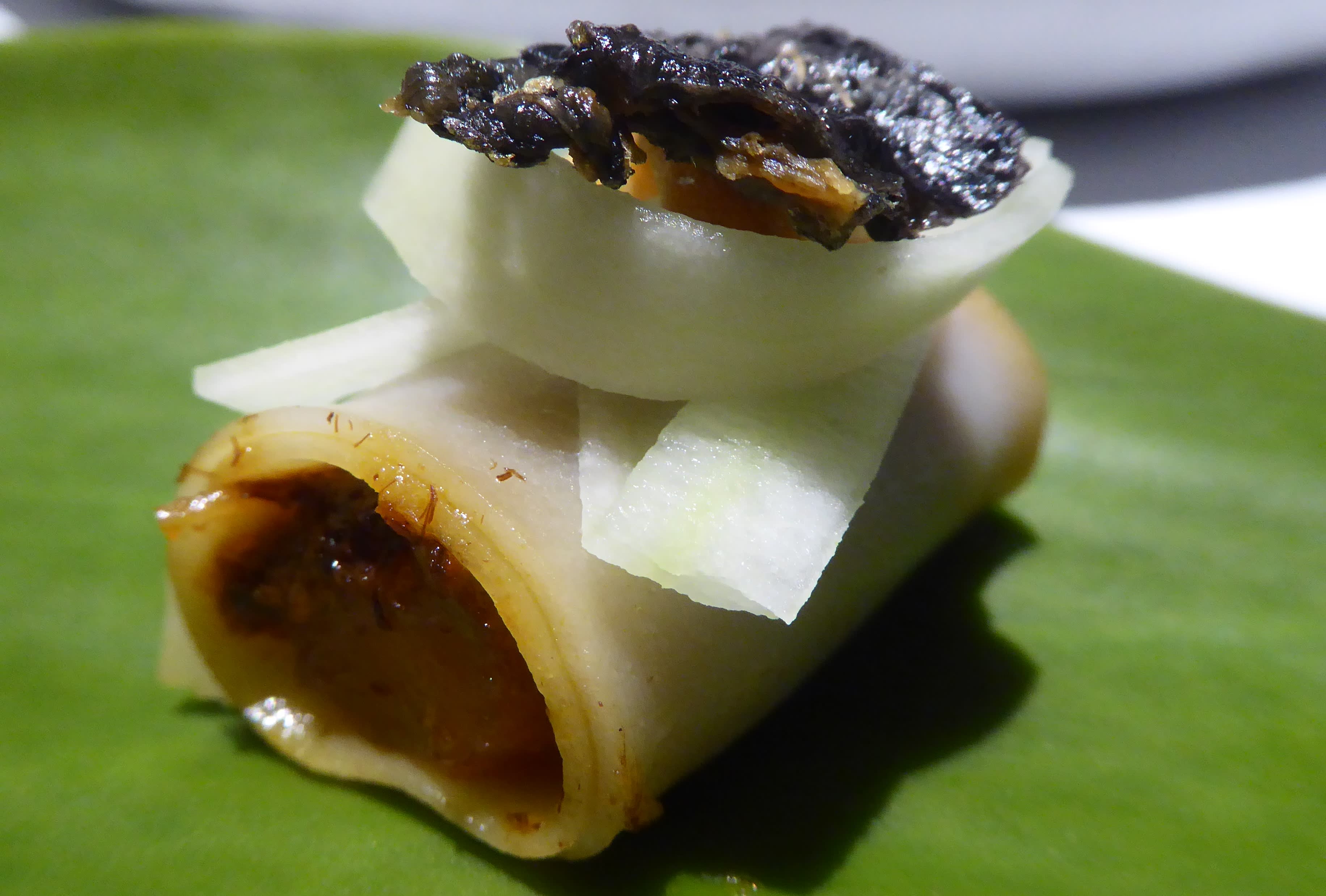 ​​​​​​SINGAPORE -- Since it opened in May, Circa 1912, chef David Yip's uncompromising master class on traditional Cantonese cuisine has been the talk of this fickle foodie town.

The year 1912 marked the end of imperial rule in China and the beginning of decades of political instability, occupation and civil war. But for Yip, the year also signified the democratization of Chinese cuisine. Chefs who had cooked "in rich men's houses or brothels" plied their wares in restaurants and shophouses open to commoners. "Everyone was given an opportunity," said Yip.

His menu, a catalog of recipes based on old-school technical prowess and rigorously chosen ingredients, elicits admiration from professionals and casual diners alike. "That man is a force of nature," said chef Woo Wai Leong of the newly opened Restaurant Ibid. "He's like a chef's chef." Yet a casual glance at Yip's resume reveals little that would predestine him for such a role.

After a stint as a typist Yip became a fashion buyer, and then a publisher; former Singapore Prime Minister Lee Kuan Yew's memoirs were among the books produced on his watch. He survived cancer in his thirties, retired from the corporate world at 46, opened a soup bar and a Singaporean restaurant in Hong Kong, then returned to Singapore.

All the while, he was amassing encyclopedic culinary knowledge, dabbling in private dinners, pop-up events, cooking classes and consulting jobs. When friends urged him to take over a restaurant in a mall along Orchard Road, Singapore's fashionable shopping district, he complied almost on a whim. But once he was committed to the project, it took just a month to develop a menu and train staff. Much of the admiration Yip has earned is due to his obsessive attention to detail. For a deceptively simple rice porridge, he selected three types of rice to produce the flavor and texture he sought. Instead of the slow simmer that would satisfy most cooks, he demanded high heat and an hour and a half of constant beating by hand. The cook responsible for the mixing threatened to quit on the first day. She did not, and her silky, fragrant elixir is a far cry from the gruel most diners know.

The same goes for another unassuming dish: fried rice. "You have to fry it my way," he told his staff matter-of-factly; but training his cooks out of their bad habits and shortcuts was a challenge. In this case, his way meant toasting grains of rice evenly, but with none of the char and smoke of wok hei (breath of the wok) that many people crave and expect.

"Wok hei is for roadside food," Yip sniffed. In refined Cantonese cooking, he said, wok hei would "mask all the delicate flavors. It also masks inferior ingredients." His pronouncements about every recipe are equally opinionated, but produce excellent results, like his poached sunflower-fed chicken; sweet and sour pork with melt-in-the-mouth morsels of perfectly rendered pork fat and the sheen of homemade hawthorn sauce; and select bite-sized dim sum items such as lacy yam dumplings. 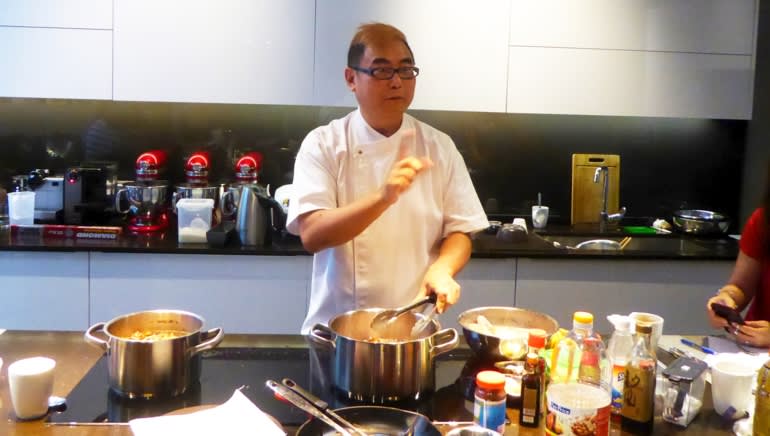 Like Yip, chef Damian D'Silva has spent his cooking career exploring his Singaporean culinary roots. Also like Yip, who credits his grandmothers with his attention to detail, D'Silva acknowledges his Eurasian paternal grandfather, who cooked the cuisines of his multiethnic friends and his maternal grandmother's closely-guarded Peranakan (Chinese-Malay) repertoire.

That background has given D'Silva the enviable position of having almost all of Singapore's gastronomic traditions at his fingertips. "I'm fortunate I can cook different cuisines," he said between services in Folklore, his latest restaurant, which opened a year ago. The name of the restaurant reveals its intention: telling the stories of Singapore's heritage cuisines. "I want you to remember that grandma was in the kitchen cooking for you," he said.

Yip and D'Silva, a former aircraft engineer, both came to the professional kitchen late in life, but have won respect from their fellow chefs. "We look up to [them] as veterans of the industry with so much experience," said Woo. "I love Folklore. [D'Silva's] kueh (desserts) are amazing and [his] buah keluak fried rice is junk food of the highest order," Woo added, referring to the ink-black fermented fruit that is a trademark of Peranakan cuisine. "And I mean that as a compliment."

At Ibid, Woo has taken his own Chinese sources in a direction he calls "nanyang" (southern seas), after a group of painters who left China in the 1930s and 1940s, many of whom settled in Singapore. His shao bing, more cheese crumpet than the usual spring onion pancake, and served with whipped butter and laksa leaf, an herb common in Malay cuisine, embodies his sense of old and new, east and west, China and Singapore.

Woo considers his contemporary chef Li Guang Han of the one-Michelin-starred Labyrinth as a friend and mentor. They swap ideas over friendly after-service suppers, and not-so-coincidentally both decided to put a traditional dish of tea eggs on their menus. But their execution of the dish is radically different. At Labyrinth, it is a bare quail egg simmered in tea that serves as the opening amuse-bouche (appetizer) in all its self-assured elegance, washed down with a thimbleful of kombucha, an effervescent beverage fermented in-house. At Ibid, the dish is designed to be a showstopper: a runny egg on a bed of soubise (a classic French onion sauce), with ginkgo nuts and shiitake mushrooms, in a steaming broth made of pu-erh, a Chinese tea, poured at the table.

Han's interpretations of Singaporean cuisine have made him a figurehead of modern Singapore cuisine, known as ModSin, which takes classic dishes and turns them on their heads. Every course on his current menu harks back to a memory -- after-school waffles, his grandmother's Western tenants, or eating satay on the street -- transformed into something unexpected. Singapore's iconic chili crab is cooked by Han with the sweet meat of locally-fished wild crab and homemade chili ice cream.

Even though Han's cuisine uses tradition as a springboard for his creativity, the influence of Yip's old-fashioned ways can be felt in his kitchen, too. "David is a great master of tradition," Han said. For example, when almost every other chef would reach for ready-made sauce, Yip steadfastly insists on making his own coarse oyster sauce, which exudes a depth that no bottled sauce can replicate.

"When I tasted David's oyster sauce two years ago, it changed my life," Han said. He calls his epiphany a pivotal moment that moved him to think beyond his reworked classics and ultimately led him to champion local producers and suppliers.

"It made me question everything I did as a chef. Why was I buying bottled stuff?" said Han, who now brews his own sweeter, smoother oyster sauce. "I questioned the produce I was using, where it was coming from, who was selling it to me, and how things tasted [in the past]." Han switched to sourcing most of Labyrinth's ingredients from farmers, fishermen and other artisans around Singapore -- no small feat in a city-state heavily reliant on food imports.

Chef Pang Kok Keong, of Antoinette, took 20 years to find a path to his own culinary roots. He built his reputation in French patisserie, eventually opening Canele, the now-shuttered pioneer of French-inspired cake shops in Singapore. He moved on to be chef-owner at Antoinette, where he serves a mix of French pastries and savory dishes. But he felt that something was missing. "I'm a Hakka," he said, sitting in his rococo-style cafe in Penhas Road, referring to a southern Chinese language group that forms a minority of Singapore's ethnic Chinese population. "All my life I've been doing Western cuisine. But why not put the same kind of dedication and spirit into my own food?"

Against the odds, Pang launched a one-item menu earlier this year, making abacus seeds, delicate pillows of mashed yam and tapioca starch sauteed with fragrant ingredients like dried shrimp, pork lard, cuttlefish and mushrooms. People use the alley behind Antoinette to pick up their orders, and are usually met by the chef.

"In the beginning, it was hard to make my colleagues understand this passion of mine," he admits. "No one welcomed more work, and Hakka food is very labor intensive." But word spread, and the food was popular, often with Hakkas who could not find the dishes of their childhood anywhere else. The menu has gradually expanded. "Now on a weekend we can do up to 20kg of abacus seed and up to 400 kueh," Pang said.

"Why don't we slow down, and taste what is lost?" he pondered. "I think it is very important, especially now that I have kids. It would be a shame if they grew up not knowing what Hakka food is."

D'Silva made a similar point, predicting that more Singapore chefs who are dabbling in Western cuisines will return to their first loves. "They will go back to the old way," he said. "Your heart will bring you back to where you belong."