SINGAPORE -- One evening in May 2015 in Singapore, a week before the public launch of a much anticipated manga-style novel, publisher Edmund Wee received a phone call summoning him to the National Arts Council.

The book was "The Art of Charlie Chan Hock Chye," a sprawling, ambitious retelling of Singapore's post-war story by celebrated local artist Sonny Liew, and the government-backed Arts Council had contributed thousands of dollars toward its publication. But on the eve of its launch, someone got cold feet about the story, which weaves the titular fictional character into real historical events and in doing so, subtly challenges the government-approved narrative of the nation's rise.

"They called me on a Friday night -- the Arts Council, not the security police, to be clear -- and said: 'can you come down and bring the manuscript?'" Wee said in the offices of Epigram Books, the publishing house he founded in 2011. He met with officials the next day, and allowed them to compare the draft that had been submitted with the grant proposal with the finished work. 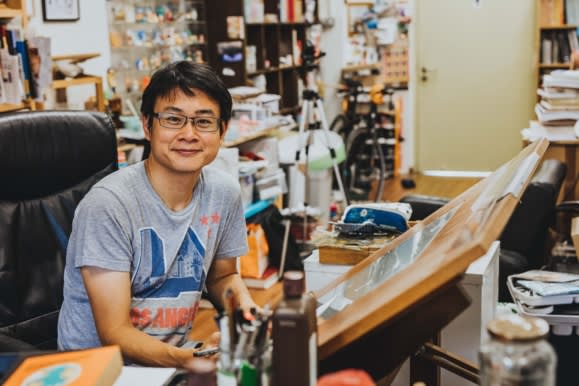 Wee insists that the two were substantively the same. Regardless, the Arts Council asked him to cancel the launch and insisted that Epigram pay back the grant money, arguing that the book's inclusion of "sensitive" content breached the terms of its support. In a later statement, they argued that the work "undermines the authority or legitimacy [of the government]."

The publisher had anticipated some pushback, and had asked Liew to make a couple of modifications before publication. "There were only two things that could be modified, that I thought would get us into trouble," Wee said, adding after a pause: "Well. I knew the whole bloody book might get us into trouble."

Epigram did not cancel the launch, and the whole first run of Charlie Chan sold out within a week. It has since been reprinted multiple times and published in the U.S. and France. In July this year, Liew won three Eisner Awards -- the so-called 'Oscars of Comics.'

A faintly melancholic figure who speaks in tight, staccato sentences, Wee is a leading figure in the emerging 'Singlit' movement, but is rare in his desire and willingness to publish works that challenge and provoke in a country which prizes order and compliance.

"I think of America. I think of Huckleberry Finn. Everybody's read that. Everybody understands the values of To Kill a Mockingbird. Everybody in America has read it, and everybody understands it. There's a common story," Wee said. "In Singapore we don't have it. The only narrative we have is the [ruling People's Action Party] story. Sleepy village. They came along, and we should be grateful. That's the only narrative. What other stories did we have? None."

Wee, who initially made his name as an award-winning graphic designer, said that he started Epigram in part to find and publish the Singapore stories that were not being told. That inevitably meant working on complex issues of identity, race, politics and sexuality -- the kind of discussions that the government tries to discourage.

Among the works that have courted controversy are "Death of a Perm Sec," a political thriller written by dissident writer Wong Souk Yee, and Jeremy Tiang's "State of Emergency," which follows a family caught up in the Communist insurgency in Malaysia after World War II, and Singapore's often brutal crackdown on suspected leftists during the Cold War.

Tiang, an established writer and translator, was initially given an Arts Council grant but had his funding withdrawn after submitting a draft, ostensibly because he had deviated from his original proposal.

"What was his original proposal? Did he say he was going to write a pro-government novel?" Wee said. "It's a non-explanation. So he didn't get the rest of his grant. He finished his novel, he offered it to me, I said: wonderful story. I'll publish it. I know I was never going to get a grant. But it's a wonderful story. What's wrong?"

Singapore is a small market and publishers are reliant on government support, mainly in the form of grants for publishing and travel stipends to attend international book fairs. As a principal sponsor of the arts, the government exerts a considerable influence on what gets published and promoted.

Nothing is banned, but critics say that by strategically applying and withdrawing money, the state can shape the literary output of the nation so that it conforms to and reinforces accepted national narratives and values. The same authorities that are tasked with driving creativity and showcasing Singapore's identity and culture to the world are also tasked with ensuring a degree of conservatism and discouraging challenging work.

Sonny Liew has come to embody their dichotomy. After the announcement of his Eisner Awards, the NAC publicly congratulated him -- eventually -- but studiously avoided mentioning the title of the book.

Liew still receives invites to official events, but says that since "Charlie Chan" was published his relationship with the NAC has become "trickier." He is waiting, he said, for some clarity on the attitude of authorities toward him and his work.

"On my part, I believe that more dialogue is required," Liew said, during an interview in his studio. That space, a large former classroom in the Goodman Arts Centre, its door marked "Secret Robot Spy Factory," is subsidized by the National Arts Council.

Vagueness about the scope of the government's red lines has long been a challenge for writers and artists in Singapore. Liew, like others, referred to the "OB markers," the ever-shifting "out-of-bounds" signs that only become clear once artists cross them.

Jeremy Tiang, who is now based in New York, believes that there is now a core of writers willing to "push the envelope."

"There is sort of a snowballing effect, I hope, where more and more of these voices are coming to the fore. And I hope we draw solidarity from each other," Tiang said. "I hope it's a sign of political and artistic maturity. I don't think any of us see this as challenging or setting ourselves against the government, which is how it's often presented, but just arguing for there to be more space, and for more than one point of view to exist."

At Epigram, Wee admitted that he has needed to tighten his belt. All of his travel grants have been refused since "Charlie Chan" was published, and he expects to trim his staff and his publishing schedule for 2017. Not all of that is down to the withdrawal of government support. Market conditions are tough, and the decision to open an office in London to try to get titles onto the prestigious Booker Prize shortlist has been a drain on resources. Another breakout international success might help the company to stay afloat, or it could put even more pressure on it.

"The government itself says ' ... ' We need more people with different views. We need more naysayers.' Are they very serious? I don't know if it's lip service, but they do say it. Some of us take them at face value. Some of us do it because we believe in having different stories, a variety of stories," Wee said.

"My attitude is that this society would be much better if we can talk about many more things. And publish them. I do it, clearly, with that intent in mind. I'm not trying to give two fingers to the government. I'm a person who loves stories."