After the harvest: rural and fishing views along the Tohoku coast between Niigata and Akita. Sunny days belie the ferocious winds that blow in from Siberia. (Photo by Mark Robinson)
MARK ROBINSON, Contributing writerNovember 11, 2020 08:00 JST | Japan
CopyCopied

TOKYO -- In mid-October I rode a slow train along the coast of the Sea of Japan. I wanted to become one of those people in travel posters, looking out from my carriage trundling through the scenic prefectures of Niigata, Yamagata and Akita. The landscape did not disappoint, with mountains and drifting clouds behind fields of autumn rice stubble on one side, and black rocks rising from white foam and dark water on the other.

The COVID-19 pandemic has crushed local sightseeing in Japan, and the regional economies that depend on it. Selfishly, I knew this would mean smaller crowds and easier travel, despite the government's "Go To Travel" tourist subsidy campaign, which was expanded in October to benefit people from Tokyo. I had not sought any of the available discounts, because they seemed so complicated to use. Perhaps many others felt the same; I was more or less the only passenger on the train, and a lone tourist in most places I visited.

I alighted first at Akita, the capital of Akita Prefecture, one of six prefectures that make up the region of Tohoku. Ravaged in winter by snow and icy winds, it is one of Japan's poorest areas, surviving largely on fishing, farming and tourism. The 2011 nuclear meltdown at Fukushima crippled Tohoku further, with thousands of people still displaced.

In the city's Kawabata riverside district is a strip of informal izakaya taverns, hostess bars and sex clubs, many of them shuttered. Touts dressed like white-shirted waiters loitered outside a few that were still operating. At one izakaya I ate chargrilled local chicken and sashimi of fresh ice goby fish, like tiny translucent noodles. At another, I had cold roast beef with Parmesan cheese. The food was good.

A young chef at the charcoal grill told me his ambition was to run his own place. Then he looked doubtful. "It will be hard. All the young people here are leaving. There's nothing in Akita but the food." Top: An alternative train journey follows forests, rivers and rice fields inland between Sakata and Shinjo, connecting with the Yamagata shinkansen to Tokyo. Bottom: In season -- ice goby sashimi. Tohoku is famous for its seafood and other specialties, including the meaty hina-dori chicken, sake and excellent rice. (Photos by Mark Robinson)

The next day I headed back along the coast to the port city of Sakata, in Yamagata Prefecture, which is home to about 100,000 people. The receptionist at the railway hotel said I could benefit from the travel subsidy campaign merely by showing my ID, which would get me a 35% discount and some shopping coupons worth around $20.

A friend had recommended a small izakaya called Nibancho that stood alone on a dark corner of a residential neighborhood. I was the only customer. The master was an older man named Koji Aotsuka, comfortably overweight under a traditional blue work robe, with a gentle stubbornness, glasses and few teeth. He was playing video poker when I arrived, at the end of the empty counter. His wife Keiko Aotsuka sat beside him.

It quickly became obvious that Koji has an endless inventiveness toward food. He conjured surprising dishes out of his narrow open kitchen, with little apparent effort. "How about figs?" he said, after I had eaten grilled fish, pork skewers and some delicious sashimi of trevally and squid. He sauteed the homegrown fruit in butter and sugar. "Do you like crab?" he said, before presenting a sublime bisquelike soup of miso paste and a river-crab stock in a small wooden bowl. He had shelled the crabs individually then put them through a mixer before straining. Top: It’s worth booking a window seat. The Inaho limited express takes about three-and-a-half hours between Niigata and Akita. Bottom: Koji Aotsuka at Nibancho in Sakata. A classic neighborhood izakaya with daily surprises depending on the season and the markets, and what he feels like cooking. (Photos by Mark Robinson)

A stack of glass jars on the bench were filled with something green. "Genovese sauce," he said. "I had so much basil in my garden I had to do something with it." He gave me a jar to take back for our mutual friend. To go with the figs he ground some coffee by hand -- an improbable drink for an izakaya. Keiko, a former art teacher, worked the two sides of the counter, squeezing behind her husband in the kitchen as she grilled skewers at one end or poured drinks at the other. It was like being at home with the right relatives, where the conversation leads anywhere you like, and you eat whatever you like.

Nibancho has operated for more than 40 years in this location. "I'm 70, you know," said Koji. His tone suggested this surprised him. "It's a question of whether this place collapses before I do."

The region is hurting, and not just because of the pandemic. "There are fish we used to see, that we don't see anymore," said Keiko. "And it's hard to get the river crabs because the crab catchers are quitting."

"Young people are not following their parents' businesses," said Koji. The couple have no children, so there is no one to inherit the tavern. 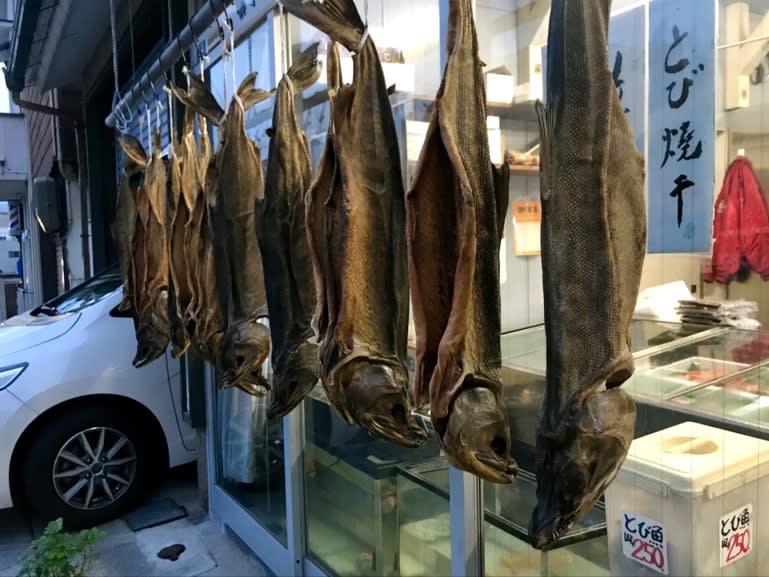 Fish shop, Sakata. Air-dried salmon is hung for a year and acquires a pungent taste and jerkylike texture. (Photo by Mark Robinson)

We talked about where in Sakata I could go. Koji came around the counter to draw a map. I said I wanted to wander an old nightlife district by daylight. Koji suggested I try around the temple called Kaikoji. Then he leaned closer and said: "You could even see a mummy there." His eyes widened. "Maybe you could see two!" I thought he was joking.

On the way to the temple the next afternoon I passed dozens of dilapidated bars, many defunct, with names like Bon Nuit, Dream and Joke, some with their steel stairways almost rusted through. A decrepit theater called Minato-za was featured along with other locations in the Oscar-winning 2008 Japanese film "Departures," about a young musician who prepares bodies for funerals. After the film's success, the owners of one building that was used for its exterior remodeled the decor inside to recreate the studio set. It was opened to tourists for a while, but has since closed.

The blackened arms and faces of the mummies (formally known as sokushinbutsu) in the dark chamber at Kaikoji shone in their glass-fronted altars like gnarled wood, their expressions pinched and pulled back over protruding teeth, their hands raised as if trying to say something. Both former abbots of the temple, they reached their present states in 1755 and 1822. Unlike typical mummies, they sit in lotus position under their colorful robes and pointy hats of black and gold. 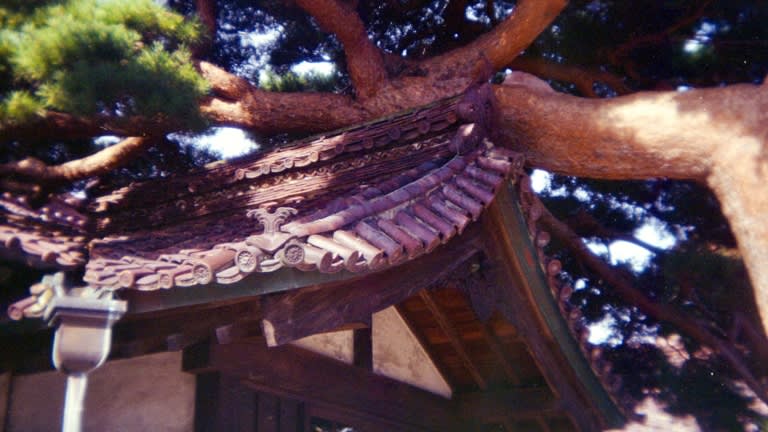 Ancient roof and pine in Sakata. The unique Honma Historical Residence (1768) combines samurai and merchant architectural styles and is one of many well-preserved sites. (Photo by Mark Robinson)

Here too I was the only visitor, and stood in silence as the son of the chief priest explained the exhibit. He was articulate and cheerful. The temple is careful not to describe the mummies as saints or Buddhas; in English they are referred to as "flesh icons." The young priest said they were men who went all the way in their "training" by sequestering themselves in the mountains, eventually climbing into a hole which was then covered over by disciples who inserted a breathing pipe but no food, and slowly atrophying.

There are 16 known flesh icons in Japan, of which eight are in Yamagata Prefecture. Local people regard them with mixed feelings; some are said to believe they are Buddhas. Self-mummification was outlawed in the early 20th century.

Leaving Kaikoji I went to a nearby lookout beside an elegant statue of the 17th century poet Matsuo Basho, who recorded stopping here in his "The Narrow Road to the Deep North." Sakata was a major shipping hub in Japan's Edo period (1603-1868), sending rice, safflowers and other produce as far as Osaka, with the boats making the circuitous journey around the southern tip of Honshu, Japan's main island. The trade created untold riches for a number of local families, and the connection with the western regions that include Kyoto, Japan's former capital, brought geisha culture. I visited a former geisha restaurant and some spectacular residences, as well as an art museum showing part of a merchant's impressive collection. 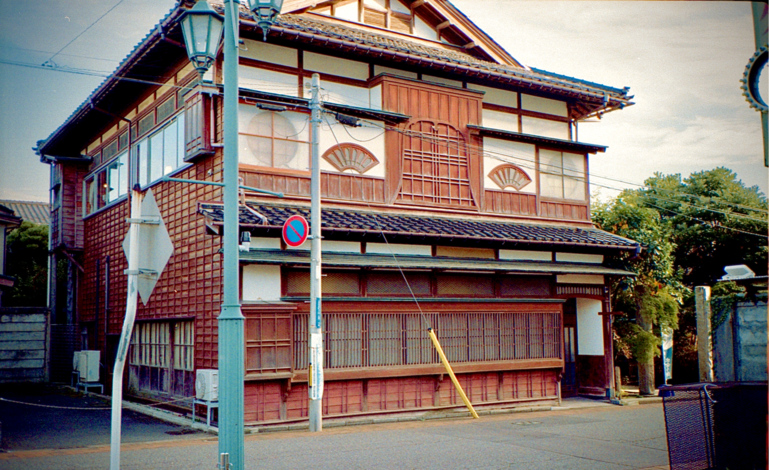 Walking down the hill at dusk I passed a fish shop displaying a half-dozen meter-long salmon, drying in the breeze. The elderly fishmonger was cutting up another carcass with a large knife. I bought some of the jerkylike meat, which is hung for a year. The fish are, in a sense, mummified.

I decided to return to Nibancho. I was early but the place soon filled up with regulars. A local assemblyman who sat next to me with his wife asked Koji if "Go To" was bringing any benefits. Koji shook his head. Gesturing to me he said I had been the only customer the previous night, and while that was all right for the two of them, because they don't need wages, establishments with employees were suffering badly.

I ordered the same trevally sashimi I had enjoyed the previous evening. But the dish Koji produced was entirely different, the fish cubed and done in carpaccio style with a citrus and shiso leaf dressing and sesame seeds. He said with a knowing air: "You wouldn't want the same thing you had last night, would you?" I figured that even if I did, his off-the-cuff creation was infinitely better for being spontaneous. I also decided that I would be back, regardless of tourism campaigns.

Since this article was written JR East began offering an unlimited 3-day rail pass to foreign passport holders in Japan.

Mark Robinson is the author of "Izakaya: The Japanese Pub Cookbook"