Soccer balls a tool in Philippine fight against Islamists 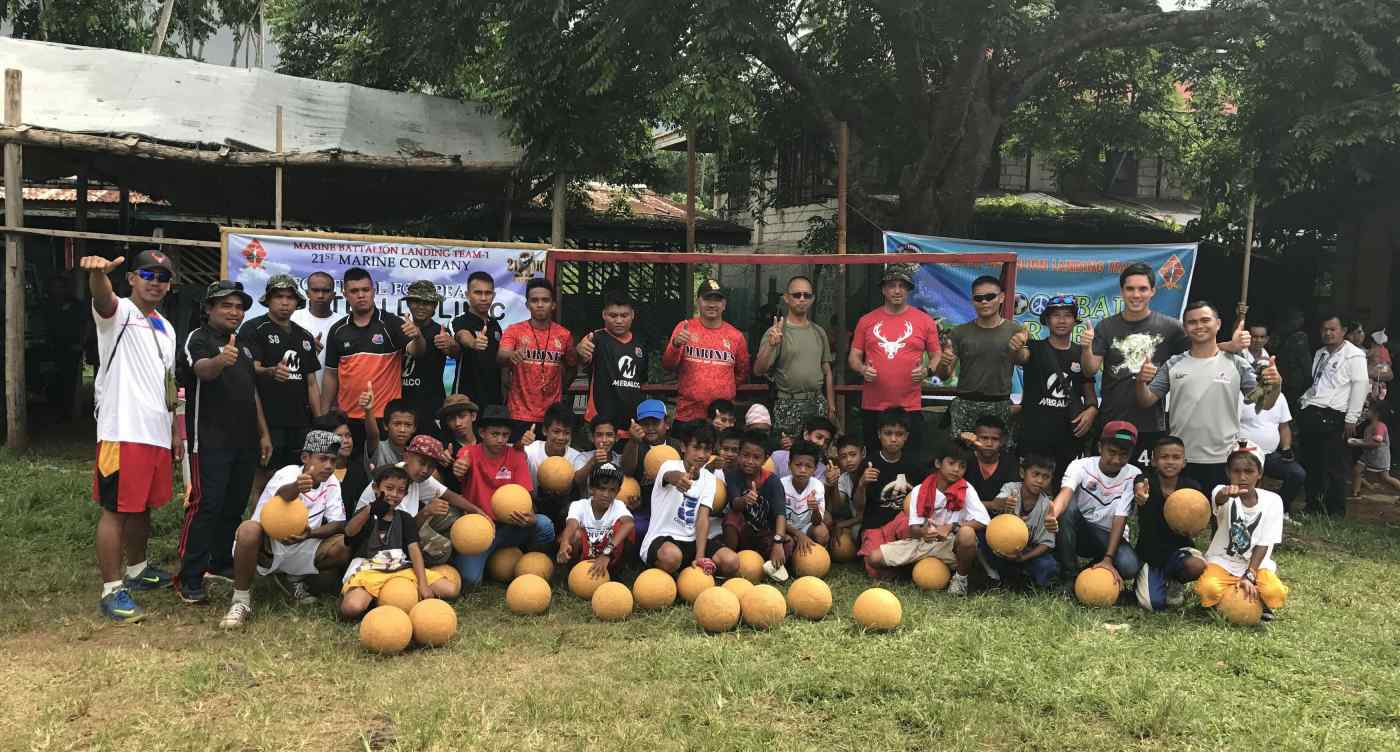 KUALA LUMPUR -- As a member of the Philippine national soccer team, Simon Greatwich has played all over Asia, but perhaps his toughest away trip came in April.

It involved an eight-hour boat journey to Sulu, an island in the far southwest of the Philippines often in the news as a setting for acts of extreme violence by Islamist rebel groups.

"I was told not to go by everyone I knew," said Greatwich. "They said it was too dangerous."

Greatwich's mission was to strike at the roots of violence by joining sessions of the Football For Peace program, which seeks to interest and involve local children in soccer as a safe outlet for their passions.

The program was started by Marine Lt. Col. Stephen Lalas Cabanlet in 2011 and it has been supported by the Philippine marines ever since. Simon Greatwich, right, and his friends distributed national team and FC Meralco Manila jerseys to Sulu children during their Football For Peace clinic in April (Courtesy of Simon Greatwich)

The armed forces are in Sulu to fight Abu Sayyaf. The group, which was formed in 1991 and has publicly linked itself to Islamic State, gets much of its income from kidnapping and ransoming foreigners, claims to be pursuing the establishment of a Muslim state and has often beheaded its victims.

Islamic extremism is rife in the southern Philippines, with insurgents occupying parts of the city of Marawi on the island of Mindanao in recent months. The beheading of a local police chief in late May was behind the decision by President Rodrigo Duterte to impose martial law on the southern part of the country.

Greatwich spent three days teaching Sulu children how to play soccer. "I had doubts [about going], but when the marines are hosting you, you are safer, though there are no guarantees," he said. "We were up in the mountains, hundreds of yards from Abu Sayyaf, and the marines told us that we could probably be seen through sniper lenses. It was a disturbing thought, but the kids love football and it was worth it."

Football For Peace coaches children in Mindanao and other places to establish a bridge between these mostly impoverished areas and the rest of the country.

"These are local kids and very vulnerable to recruitment by insurgent groups," said Cabanlet, who personally invited Greatwich. "We want them to have joy in their lives so when the [Abu Sayyaf] recruiters, come the kids will say, 'I want to finish school and have a peaceful life'."

Football For Peace is not connected to the international group of the same name which was founded two years later and runs programs in Indonesia, Singapore, India, Pakistan and other countries with backing from FIFA, the global soccer governing body.

Rookie Nagtalon, a civilian co-founder of the Philippine program, said it started somewhat by chance in 2011 when children saw the marines playing soccer in Sulu. "Before, when kids saw men in uniforms, they would walk the other way," he said. But with soccer it was different. They saw the marines playing and wanted to play too."

The next day, the children were back and it gave the soldiers an idea. "They told the kids that if they picked up the trash around the villages then they would get a ball to play with," said Nagtalon. The children dutifully returned the following day with bags of trash. "That is when Stephen [Cabanlet] called me as he needed more balls," said Nagtalon.

More 5,000 children of all ages and backgrounds have been coached in Sulu and other provinces including Tawi-Tawi, Basilan and Palawan. The Philippine Army and Air Force have also joined the program, as has the One Meralco Foundation, the social development arm of Manila Electric, which also funds a professional soccer team in the capital. More than 1,000 children have gone to Manila to take part in the now annual FFP Festival Educational Tour and Football Cup.

Mika Palileo, an account director at marketing company Ogilvy & Mather Philippines, said she had been impressed with the impact of the program during visits to Sulu.

"What struck me most is how the program has changed the kids' mindsets," she said. "The teachers of an elementary school were saying that the boys who participated in the Football for Peace program were actually performing better in school."

Nagtalon admits that Muslim parents and community leaders were initially cautious about the idea of their children being taken on trips to Manila, fearing that they would be exposed to Christian teachings.

"The kids had been told that the people in Manila and Christians in general would not treat them kindly," said Nagtalon. "But they had a great time and it corrected a lot of misconceptions."

For Nagtalon, the program is about providing hope. "The children have no chance to dream in their home but this has changed their outlook. Before they thought that even if they went to school, they would go nowhere. Football has showed them there is more. They are dreaming now."

They are also bridging gaps between their parents and the military. "Before when the military approached a new area, they had to talk to community leaders first and then move from there," Nagtalon said. "But with football, it has been the other way around. Kids are doing the approaching and the parents are happy the kids have discipline and are studying at school."

Cabanlet said neither martial law nor the Islamist militants had interfered with his soccer program. "We are winning here," he said. "We are continuing to reduce the insurgents' strength and stop them from kidnapping. We need the support of the people here and in nearby provinces and Football For Peace is one way to help us to mobilize the population and gain their support."

"Guns are not the only weapons," he said. "Football can make a difference too."