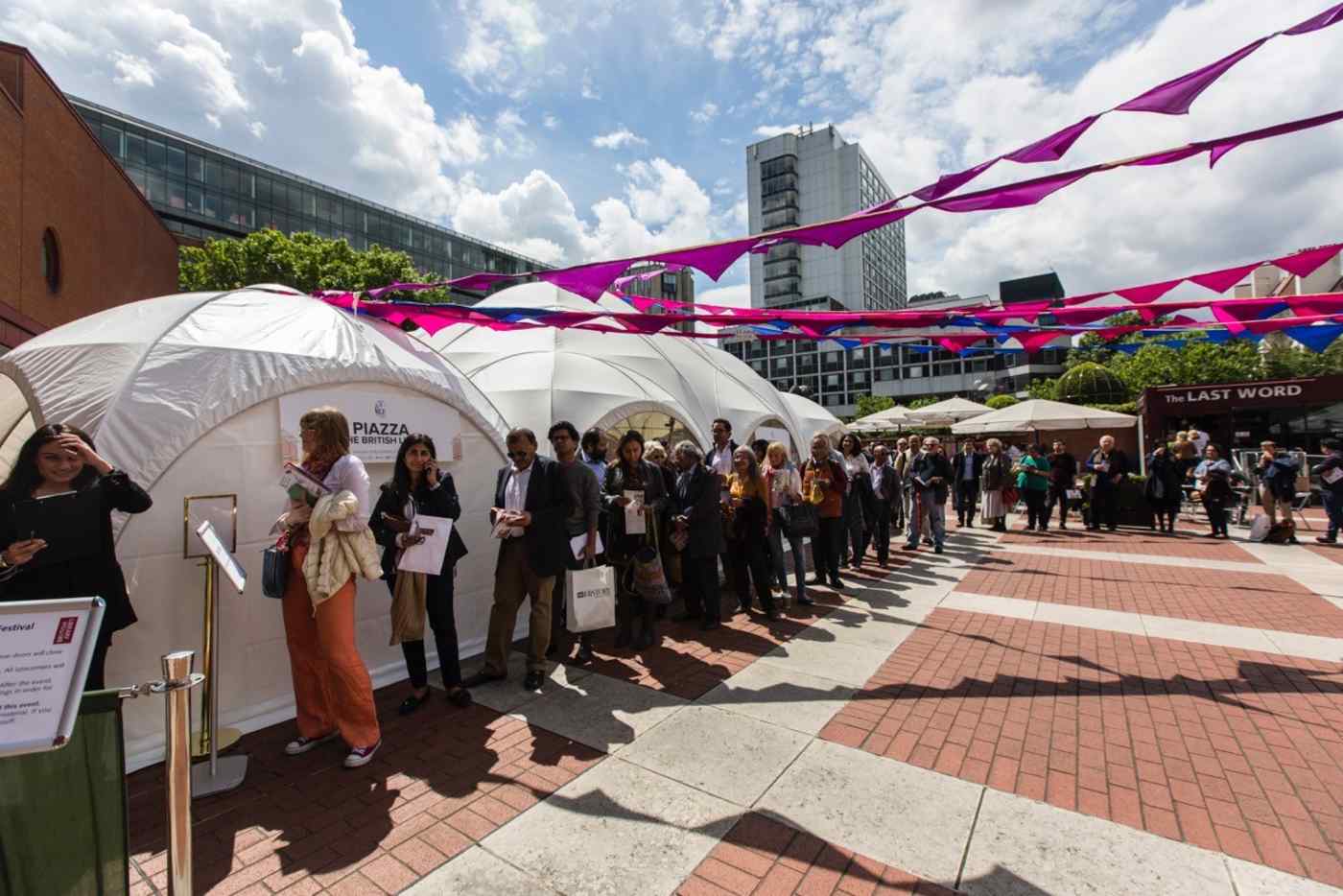 Crowds line up for entry to the Jaipur tent in the piazza of the British Library. (Photo by Stuart Arnitt)
JOHN KRICH, Contributing writerAugust 16, 2017 12:08 JST | China
CopyCopied

LONDON -- On either side of the River Thames, two nations often in conflict were recently unified by a single topic, with simultaneous panels sharing stories of the event that gave birth to both: the partition of British India into India and Pakistan in 1947.

Seven decades after that brutal event marked the end of colonial rule, a new struggle between India and Pakistan came home to the heart of the former British empire. On a single May weekend in London, overseas versions of India's Jaipur Literary Festival and Pakistan's Karachi Literary Festival were staged simultaneously -- each presenting its own clutch of novelists, scholars, poets and pundits. 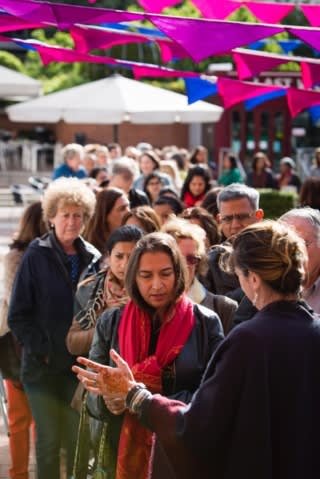 Together, the festivals showcased not just national differences, but the ongoing impact of India and Pakistan on literature in English, as a major source for original, multicultural voices fed by a booming South Asian market for English-language publishing. They also served as joint testaments to the rising popularity of such festivals throughout Asia.

In a period when Asia looks to be switching most of its scanning of texts to the smartphone, the growth of live events dedicated to showcasing literary talent and traditions, mostly in English but sometimes in local languages, is mind-boggling. In the decade since the founding of the Jaipur Festival, now billed as the world's largest annual celebration of books and writing, copycats have proliferated throughout the continent and beyond.

Among the most established festivals in Asia now are the literary conclaves in Ubud and Bali in Indonesia, and in Kerala, India, which began life under the auspices of Britain's expanding Hay Festival of Literature and Arts. In China, despite fears of government censorship, the foreign-founded Bookworm shops have spawned literary festivals in Beijing, Shanghai and Chengdu. Myanmar has its own Irrawaddy Literary Festival in Mandalay, and there is even a celebration of Himalayan prose and poetry called "Mountain Echoes" in Thimpu, Bhutan. Malaysia meanwhile has steadily built up an annual literary gathering in Georgetown, Penang, to be held in November.

But it is South Asia that has seen the strongest growth in literary gatherings, given its vast market for English-language publishing and reverence for authors as cultural figures, with a clogged calendar of festivals in Mumbai, Goa, Delhi, Kolkata, Patna, Chandigarh, Kochi, Pune, Lucknow, Chennai and Bangalore. There is a writer's platform in Assam, as well as Jammu, and Sri Lanka has fitfully started its own festival in Galle.

Not a literary war

For London's two Asian literary festivals, there may have been an element of conflict in their joint May staging. The hugely successful Jaipur festival willingly yielded its spot in London's Southbank Centre as part of its ongoing encouragement of the upstart Karachi festival, only to end up running concurrently at the more prestigious, if less vibrant, British Library. "It's not so much a literary war as it is a literary miscommunication -- to hold them both at the same time," best-selling Anglo-Pakistani author Kamila Shamsie told the Nikkei Asian Review. 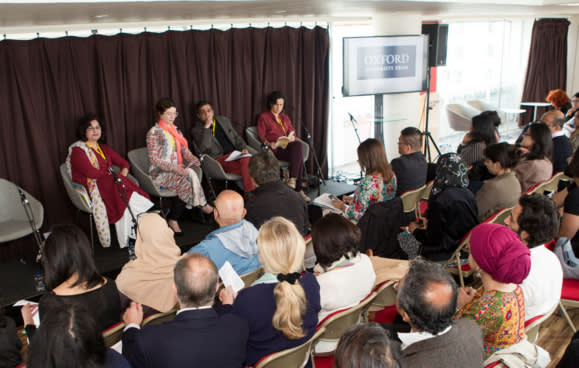 The biggest rivalry between the two literary camps however might concern which festival overcame greater odds to achieve mass acceptance. Against the backdrop of bombings and poverty, Karachi festival creator and director Ameena Saiyid, managing director of Oxford University Press, Pakistan, launched the event in 2010 to display what she calls Pakistan's "creative vitality" and its capability "of really defining ourselves as a nation."

About 5,000 people attended the initial festival, which featured 58 speakers, compared with the 175,000 attendees who heard more than 200 speakers at the festival in February. The success has led to the creation of an adjunct Children's Festival, and copycat literary gatherings in Islamabad and numerous other cities -- which the Karachi Festival directors estimate attract another 300,000 book lovers annually. Buoyed by a local community eager to explore its roots, tickets for the London event sold out almost immediately.

It is equally astounding that Jaipur, the dusty provincial capital of India's Rajasthan State, far from any global centers of book publishing, should have grown into the world's pre-eminent books-oriented gathering -- attracting more Nobel prize-winning writers than the U.K.'s older Hay Festival, and nearly as many visitors.

Attendance at the five-day event, which started with a small handful of enthusiasts interested in preserving their local heritage, has now topped 300,000. That includes a hip international crowd, many of India's elite from New Delhi and Bombay, and hordes of schoolchildren and college students. India remains a country where writers, including poets in the many local tongues, are treated as cultural superstars.

"We were lucky, in that everyone we asked was happy to come to India in January to get away from the cold," said William Dalrymple, author of numerous histories and travel books about India, who co-founded the Jaipur festival in 2006.

Many credit Dalrymple's personal contacts with England's literary luminaries for putting the festival on the map. Its charming site on the grounds of a moldering Rajasthani palace and its egalitarian vibe -- where anyone can dance to the rhythms of South Asian tabla drums with well-known writers such as Orhan Pamuk, Martin Amis, J.W. Coetzee, Kiran Desai and Richard Ford -- worked in tandem with rapid growth in English-language book sales in South Asia, he noted.

Today, publishers such as the U.K.'s Penguin Group and HarperCollins of the U.S. have established South Asian branches in recognition of the potential of what some estimate to be the world's biggest group of English-speaking readers. India's book market was rated the sixth-largest in the world in a 2015 survey by Nielsen, the U.S.-based market research group. Nielsen estimated that publishing sales totaling 261 billion rupees (around $4 billion) would nearly triple by 2020.

"There was a moment back in the '80s when it looked like the empire itself was going to be eclipsed," said Dalrymple. "That initial promise hasn't quite been fulfilled, but Anglo-Indian writing is a central and essential part of English literature -- which would be impossible to imagine without it." The Karachi festival made its first appearance overseas with an ambitious one-day program featuring 65 speakers, and Jaipur's more established two-day program took place in Britain for the third time. The former event was probably more historic. Syed Ibne Abbas, Pakistan's high commissioner to the U.K., said: "On the occasion of our 70th anniversary, this raises the profile of wonderful intellectuals and writers to present an entirely different image of our country -- not as a place of drugs and terrorism."

Topics under discussion at the Southbank Centre included "class and gender," the influence of madrassas (religious schools), and children's literature -- featuring heroines such as the Nobel Laureate Malala Yousafzai, who was shot in the head by the Taliban in northwest Pakistan for insisting that girls should be educated. "Brave Malala," as the panel devoted to her was entitled, now lives in the U.K. and campaigns for education rights. The festival also tackled stereotypes of "good" and "bad" Muslims, and celebrated the ongoing artistic "Pakistan renaissance" of which it is a part.

Meanwhile, Jaipur's London event, staged mainly in a vast tent such as those used at its usual location in the grounds of a Rajasthan palace, offered more eclectic subjects. Among topics were "The Beatles in India," the history of Hindustani stringed instruments, the spice nutmeg, Mughal art and the Mongols, the quintessentially English author P.G. Wodehouse and a broad theme called "The Idea of India."

The two festivals featured authors who have spearheaded the literary influence of their respective nations, including Pakistan's sassy H.M. Naqvi, author of "Home Boy," the winner of the inaugural DSC Prize for South Asian Literature, and the iconoclastic Mohammed Hanif. He used the gentle wit displayed in his novel "A Case of Exploding Mangoes" to poke fun in his keynote speech at egotistical men who presume to have something to make keynote speeches about. Other featured writers included India's brilliant miniaturist Amit Chauduri and the flamboyant, hyper-eloquent essayist and Indian parliamentarian Shashi Tharoor. Neither festival revisited the high-profile first Booker Prize-winning wave of Indians writing in English, such as Salman Rushdie and Vikram Seth, nor a more contemporary wave that has thrust forward rival Pakistani talents such as Daniyal Mueenuddin and Mohsin Hamid.

Pakistan's surge in recognition for writers has been more recent, and has taken a different tone from India's responses. Although most writers were hesitant to generalize, Dalrymple observed: "It's said the Pakistanis write with their pens on fire. Their work, of necessity, is more political." Chauduri took a different view, suggesting that "Pakistani writers seem to have greater latitude and can be more playful. They aren't burdened by so many myths." Of his Indian counterparts, Hanif added: "When you are a big power, you have a greater sense of self-importance."

Unfortunately, the number of Pakistani writers visiting Jaipur has fallen recently amid continuing bilateral tensions and visa issues that limit travel between the two countries. For one weekend in London, however, the two festivals served their purpose -- not as conflict carried on by other means but, in Saiyid's words, "as a forceful response to those who would spread violence and darkness."