'Cinema detective' documents scores of closures -- and a few survivors When the Somdet Theater opened in 1981 it had to be powered by a gas generator because that area of northeastern Thailand had yet to be linked to the electricity grid. (Courtesy of Philip Jablon)
RON GLUCKMAN, Contributing writerOctober 4, 2019 12:03 JST | Thailand
CopyCopied

BANGKOK -- Philip Jablon was studying for a degree in sustainable development at Chiang Mai University in northern Thailand when he wandered down a local lane and discovered an old cinema that looked like a relic from an earlier era.

Struck by its nostalgic charm, Jablon, an American photographer and cultural researcher, was eager to see a film playing on the big screen at this throwback movie theater. But by the time he arranged a return visit, the cinema had been demolished.

"It sparked something in me," he said, recalling his dismay. Since then, Jablon has spent years as a "cinema detective," tracking down old theaters in Thailand, Myanmar and Laos as part of the Southeast Asian Movie Theater Project -- a program he launched after that experience.

By his count, he has visited at least 300 towns and cities in Thailand and Laos and photographed nearly 250 independent cinemas. He fears that about half of them have vanished since he started his work in 2008.

These old celluloid palaces lived on in the fond memories of attendees, and in Jablon's expansive archives. But in a tribute to the finest cinemas, both past and still standing, Jablon has showcased them in his first book, "Thailand's Movie Theaters: Relics, Ruins and the Romance of Escape," published in June. 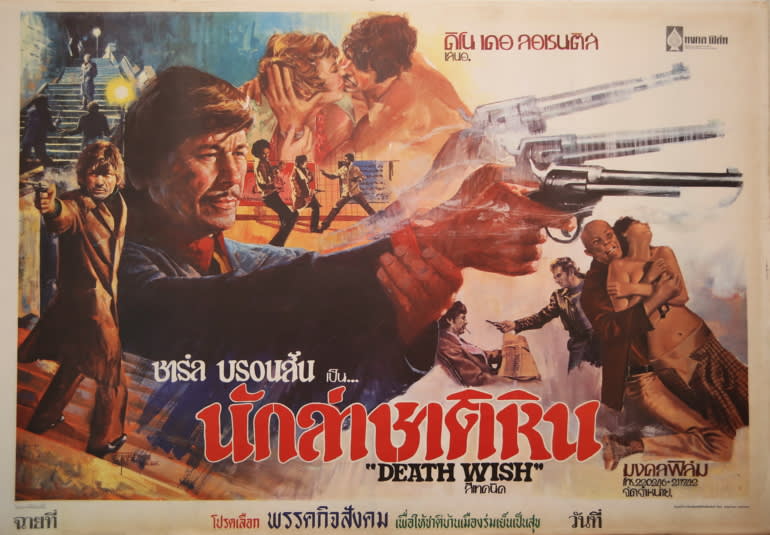 Top: Philip Jablon stands in front of the Pak Nam Rama Theater in Samut Prakan, near Bangkok, in 2015. Bottom: A poster for the 1974 Hollywood film "Death Wish." (Courtesy of Philip Jablon)

A vibrant record of Thailand's old independent cinemas, with a short section on neighboring Laos, the book features more than 50 theaters, with colorful details of the buildings' histories. It does not stop there. Jablon has enough data for another book on cinemas in Myanmar and plans to continue investigating the traditional screen scene in other Southeast Asian countries.

Cinemas around the world have faced similar pressures as competition from television, home video and streaming services have eroded their popularity. But the decline was particularly pronounced in Thailand, which once had 700 independent theaters across the country. Only a tiny fraction are still showing films, according to Jablon.

In Thailand, streaming services such as Netflix have been less damaging to independent cinemas than the growth of multiscreen cineplexes, typically located in shopping malls. Bangkok alone once boasted 200 independent cinemas, but only the once-glamorous Scala in Siam Square is still in business. Instead, Bangkok filmgoers are served by about 30 cineplexes, each with an average of seven screens. 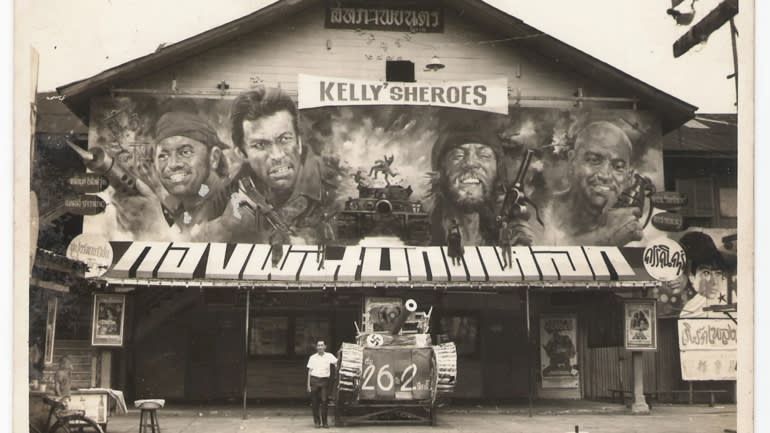 Top: The projectionist at a rural Thai theater monitors his clunky old machine. Bottom: A billboard for the 1970 American movie "Kelly's Heroes" at the Saha Cinema. (Courtesy of Philip Jablon)

"Cinemas aren't so much dying as turning into something else," said Jablon, who spent countless hours researching archives and interviewing film owners and historians before hopping on trains, trucks or buses to distant towns, often with little more than vague descriptions of old cinemas.

"It is a bit like 'Indiana Jones' at times," he said. "Access has varied from place to place, but I've been lucky. Sometimes you meet a person and doors open, you go inside and it's amazing. Even the hardest parts have been fun."

Initially, Jablon had no thoughts of publishing a book on his findings. "I just started this, and eventually put it in the blogosphere," he said. Interest escalated, especially after a discussion event in Chiang Mai in 2014.

By then, his quest had expanded to Myanmar, which had only recently opened to foreign visitors, allowing access to remote areas that offered a treasure trove of picture houses, some built during the country's decades of isolation. 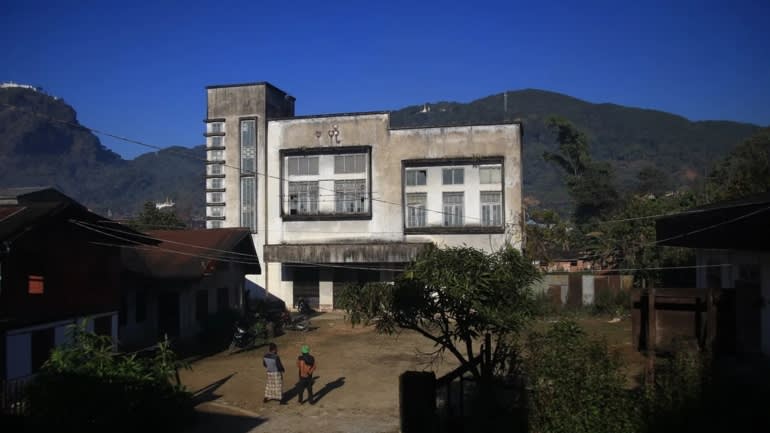 Top: The Baho Cinema in Mogok, Myanmar, is due to be renovated and reopen in the near future. Bottom: The Seno Rama Theater, in Savannakhet Province, Laos, was built in 1972 at the height of the Laotian civil war. (Courtesy of Philip Jablon)

"In lots of cities, the cinema was still the center of town," Jablon said. "In Myanmar, I've probably documented about 100 cinemas. In general, they are older, but also fading, as the country modernizes. But I started when many were still operating.

"You can really see the change going on, not only in cinemas, but the lifestyle of people and communities," he said. "It looks very different now from just nine or 10 years ago." Poster for a "King Kong" film. (Courtesy of Philip Jablon)

Jablon's book is packed with reminiscences, including the extraordinary Bangkok premiere of "The Omen," a 1976 horror film starring Gregory Peck and Lee Remick, which opened at the Siam, then Bangkok's top movie house.

The lobby overflowed with crowds that night, so the management quickly organized another show at a sister cinema, the Lido. When that also sold out, they organized a unique screening system that also included the adjacent Scala. As each reel finished, it was rapidly rewound and rushed to the next projection room.

"This is the first time in Thai movie history that a single print of a film served three different cinemas at the same time," he writes.

The Scala, Lido and Siam theaters once defined the Siam district, now marked by shopping malls standing nearly wall-to-wall, notably the Siam Center and Siam Paragon, which is listed alongside Disneyland and the Eiffel Tower among the world's top sites on Instagram.

The Siam theater burned down during political riots in May 2010, while threats of closure and conversion into shopping space have consumed the Lido and Scala for years, sparking intense debate.

Bangkok's Chulalongkorn University, which owns both, converted the Lido last year into a multicultural space, leaving the Scala as the last independent cinema still operating. Jablon hopes it can be saved as a historical treasure, and public support is growing, judging by the crowds at recent talks he has delivered on the theater. 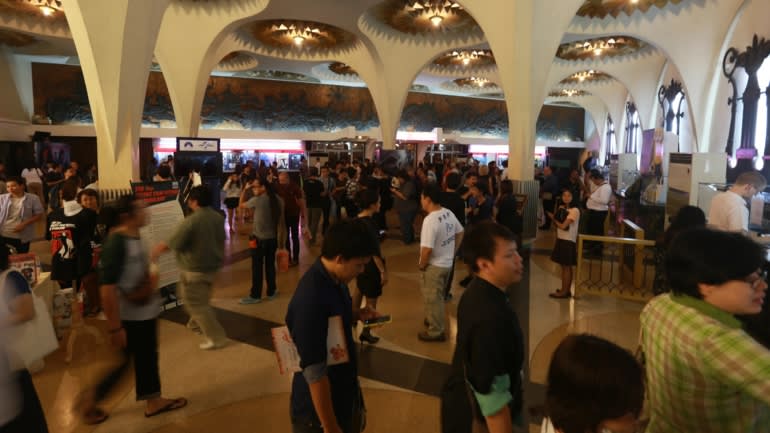 Bangkok's Scala Theater, top, and its lobby. It is the last independent cinema still operating in the city's Siam district. (Courtesy of Philip Jablon)

At the same time, the Thai capital has seen growing interest in alternative movie houses. In recent years, the Bangkok Screening Room has opened as an art house, showing independent and avant-garde fare alongside Hollywood films. The private Friese-Green Club screens an eclectic daily program in a nine-seat theater in a shophouse owned by a filmmaker, and documentary film centers have been added to the River City shopping center and nearby Warehouse 30, a community arts space.

In Europe and North America a number of heritage movie theaters have been revived as art houses, film libraries or cultural centers. There are few examples of this trend in Asia, but Jablon said he is encouraged by the recent rescue of the Prince Theater in Bangkok's Bang Rak district, in what is known as the Old Town. The Bang Khae Rama movie theater, in Bangkok, was demolished less than a year after this photo was taken in 2015.

Opened more than a century ago as the Prince Rama cinema, it closed years ago and seemed destined for the wrecking ball. Last year, however, the building reemerged as a hotel, the Prince Theater Heritage Stay, with film-themed rooms. The main hall has been used for dance classes and film screenings.

"I'm not a fanatical preservationist. I know many theaters just don't make sense anymore," said Jablon. "I realize they are businesses and need to make money. But it's important to preserve some of this heritage."