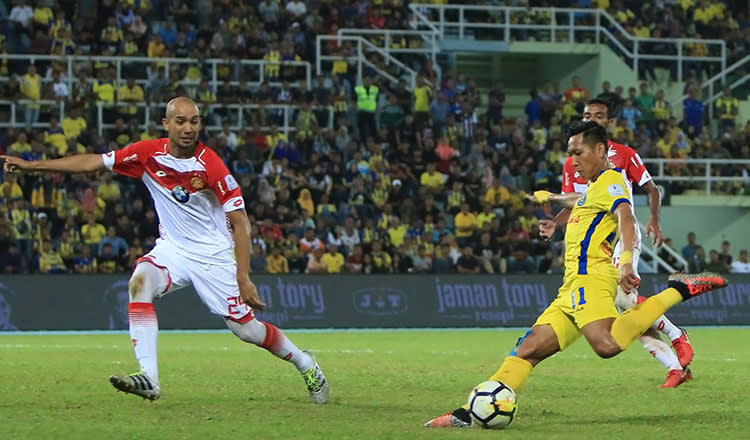 KUALA LUMPUR -- Southeast Asia's top soccer talent is on the move, with the leading teams in Thailand and Malaysia signing 24 players from outside those countries as the 2018 season kicks off, against just three a year ago.

Some of the best players from Myanmar, Cambodia, Indonesia, Singapore, Vietnam and the Philippines have signed for teams in the Malaysia Super League and the Thai Premier League in recent months. With this cross-pollination, the tournaments are looking to improve their fortunes both on and off the field by attracting new fans in the region.

This eightfold increase in talent in two of the leading leagues in the region has not happened by accident. During the previous three seasons, top-tier clubs were allowed to field a total of just four foreign players. Brazilians were the most popular nationality of import.

But in the 2018 season a fifth "slot" has been added, which can be filled only by players from the Association of Southeast Asian Nations. That means coaches can import talent from neighboring nations without using up a slot that could be used by more traditional imports from South America and Europe.

"We were thinking about introducing it for a long time," explained Ben Tan, deputy manager of the Thai Premier League, of the new system. "I am glad we managed to convince the clubs to implement this policy. At first they were skeptical, but now they can see the benefits."

Tan sees the moves as beneficial for Thailand, regarded as the strongest soccer nation in Southeast Asia, as the country seeks to grow and challenge the leading Asian soccer powers, including Japan, South Korea and Iran. The Thai league is already the best in the region and the only one that has automatic representation in the Asian Champions League, the continent's premier club competition.

"We want to raise the level of ASEAN players," he added. "They can play in Thailand in a very competitive environment and improve. Eventually, this will raise the level of play everywhere and benefit all. A strong ASEAN region helps Thailand become strong."

Thailand's 2018 player signings are not just any imports, but some of the leading players from around the region.

Myanmar's Aung Thu is perhaps the biggest soccer star in his home country and scored on his Feb. 11 debut for Bangkok-based Police Tero. Hoang Vu Samson, now with Buriram United in Thailand's northeast, is the leading goal scorer in the history of Vietnam's V-League. Mark Hartmann, who has joined Ubon UMT, has been a Philippines international since 2011.

The standard of imports to Malaysia is also relatively high, with four of Cambodia's best-known players heading south. One of that quartet, Keo Sokpheng scored the winning goal for PKNS in the state of Selangor on his debut.

"It is great to start with an important goal," Sokpheng said. "It is also great to give the fans at home something to cheer about, especially after they have given all the Cambodian players great support. We are all delighted to be playing here and want to show that the standard of our football is strong."

Scott O'Donell, a former coach of the Cambodia national team and an expert in player development, noted: "It is a great move from the point of view of the individual players. In the past, Cambodians were reluctant to go overseas, so to see four head to a bigger league is great as they will return to play for the national team as better players."

The Australian coach is concerned over what may happen if more of Cambodia's best players leave. "The Cambodia Football Association is pleased with how football has developed there over the past 10 years, but if more big names leave it could weaken the local league," O'Donell said. "They have to be careful to find the right balance."

Cambodia and Myanmar are part of a transfer chain. While Myanmar is now exporting some of its best players to Thailand, Thailand in turn has started to send its best players to Japan, and Japan exports its stars to Europe -- all in the hope that they will play at a higher level.

For permanent transfers, clubs in Myanmar and Cambodia can expect to receive compensation fees from the players' new clubs. For those going out on loan, and the likely majority who end up staying abroad for only one season, the sending clubs can look forward to their players returning and sharing the benefit of their international experience.

Future demand for player transfers will depend in part on how the new imports perform. Soccer bosses in Bangkok and Kuala Lumpur are hopeful for success, as there is more to this quota system than simply improving standards.

The Thai Premier League is not satisfied with being the best league in the soccer-mad region -- it wants to become the most popular and commercially successful.

"We are looking to widen the fan base and promote [soccer] as there are over 600 million people in Southeast Asia," Tan said. "I think the Thai league can be more popular and can attract more partners to get more eyeballs and then build on that."

According to Tan, Chiangrai United, Police Tero and PT Prachuap, clubs based in the southern Thai province of Prachuap Khiri Khan and which have all signed Myanmar players, can take advantage of commercial opportunities in that country. A leading Yangon-based bank has expressed interest in a sponsorship deal with one of the three teams, and their games will be streamed online in Myanmar.

There was much interest in the Feb. 25 match, when Police Tero traveled close to the Myanmar border to take on Chiangrai United. Both teams have leading Myanmar players, and the game was sold out weeks in advance. It ended in a 1-1 draw.

Cambodians are also watching their players in Malaysia. "These players are big stars in Cambodia and all have different sponsors," O'Donell said. "Even the national youth team can attract 40,000 fans for friendly games. There is a massive appetite to see Cambodians succeed internationally. The fans will follow them wherever they go."

Dollah Salleh, head coach at Pahang, the Malaysian club that signed Cambodian national team captain Chan Vathanaka, agreed. "There are a lot of Cambodian workers around here and they have been very excited to come to see him," Dollah said. "There is lots of attention from their media and fans."

"But none of that really matters if they don't produce on the pitch."