SILIGURI, India -- By the time the Ranchi Kamakhya Express trundled into Siliguri station, running over 10 hours late, it was almost midnight.

Siliguri is the nearest train terminal for the Himalayan state of Sikkim, where a group of nine teenage girls from Jharkhand were headed. Despite having already traveled on the train for 24 hours and exhausted, they decided to press on to their hotel in West Sikkim, a six-hour drive away. The arduous journey was preferable to compromising their safety.

"I thought of a night's break at Siliguri, but decided against it," said Malini Gowrishankar, who was coordinating the group's tour from Bangalore in south India, some 2,400km away. Gowrishankar, founder and chief executive of F5 Escapes, one of the many startups revolutionizing travel for Indian women, said some of the Siliguri hotels looked "shady."

India, a deeply patriarchal society, can be a dangerous place for women traveling on their own. The country has witnessed a steady rise in crimes against women, even after 2012, when the gang rape and brutal murder of a 23-year-old physiotherapy intern in New Delhi made international headlines.

In the five years since the incident, thought to be a "watershed moment" in India's fight against misogynistic crimes, there has still been a 277% rise in rape cases in Delhi, according to IndiaSpend, a data compiler and news provider. Gowrishankar says "safety comes first" for the girls who were on a trip to the mountains to celebrate the end of their school-leaving exams.

"We couldn't risk checking the girls into some cheap hotel near the station area -- the trip was being done on a tight budget -- so late at night," Gowrishankar said. "Some of [the hotels] seemed shady. Since we trusted the bus driver, known to us for a long time, and the girls showed strength, we decided that the group would move on."

Founded five years ago, F5 Escapes is based in Bangalore, India's startup capital, home to many of the country's women-only travel agencies. Such companies have also sprung up in Delhi, Mumbai and other cities.

The startups put a premium on safety, and typically offer group tours, including inbound tours for foreign travelers to India and outbound for Indians to venture abroad. Customized packages for groups and solo travelers are also offered.

"It was an uphill task," said Sumitra Senapaty, founder of Bangalore-based WOW (Women on Wanderlust) Club, the company that pioneered the trend some 14 years ago. "I had to convince the women that they needed their 'me time.' We taught them about empowerment through travel."

Priti Vishwakarma from Mumbai started Womaniya on Road Trips two years ago because she felt Indian women needed to be on their own to make the most of their journeys. "When they travel with their families, the women are busy as wives and mothers. They hardly get to do their own things."

More Indian women of all ages, especially the upwardly mobile urban middle-class, are traveling without their families. More often than not, they are single, but increasingly married women are also joining in. 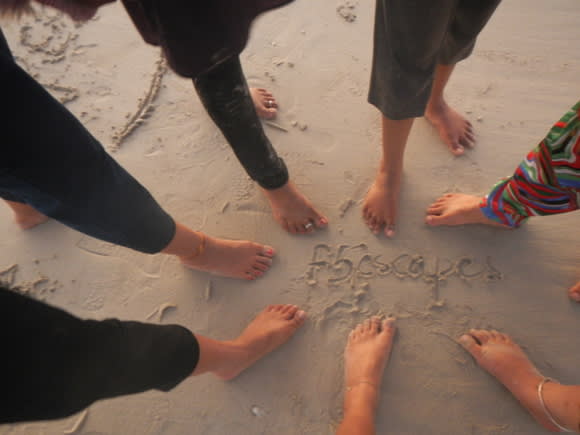 Ananksha Bumb, F5 Escapes co-founder and chief operating officer, said she was often asked: "I am happily married, why should I travel alone?" She says this mentality is changing, "especially among city women, though there's still a long way to go."

WOW Club said it used to conduct only five to six women-only tours a year initially but it now averages 150 annually. F5 Escapes too has seen their trips increase to roughly around 60 per year, compared with just nine in its first year.

Sensing the business potential, other travel companies, such as small-group tour organizer Byond Travel, are also increasingly offering women-only packages. Most of the founders and partners at these startups are women from diverse professional backgrounds but with a common passion for travel. In the course of their travels, they realized that many other women, like them, would also like to explore the world, free from family responsibilities, but with a guarantee of safety.

"I used to share photos and stories of my travels on Facebook," said Vishwakarma, who started Womaniya on Road Trips with her sister Reena two years ago. "My posts would inspire many women, but they were very scared to venture out on their own."

To reassure women, tours typically have a female coordinator who will travel with them from start to finish. Accommodation and service providers are all vetted in advance and the travel agencies would only work with trusted associate companies.

Rashmi Chadha, who founded Delhi-based Wovoyage two years ago, is working on a tracking system as an additional safety feature. "For those tourists who do not want to hire a guide or have a coordinator traveling along with them, I am working on a live [vehicle] tracking software," she said.

"Our staff at office will be monitoring their movements by tracking their vehicles in real time. If we see any unnecessary delay in some place or any unusual deviation, we will be able to take immediate steps," Chadha said. Girls from Jharkhand on their first holiday together pose for a photo in West Sikkim. (Photo by Monika Kumari)

She has already trained 48 female tour guides in Delhi and plans to train women in other parts of India through web seminars. F5 Escapes also organizes workshops on safety measures and self-defense for women in Bangalore.

Tanuka Ghoshal, assistant professor at the Indian School of Business, Hyderabad, and a single woman, has traveled solo to Europe and the U.S. In India, she feels it is much safer to travel in a group, and has done so on two occasions -- to Rajasthan with WOW Club and Kashmir with Byond Travel.

"It is much safer in the company of women," she said. "I truly enjoyed the bonding with other women, many of them were extraordinary and inspirational."

In Sikkim, the Jharkhandi girls are thrilled to see the mountains for the first time, a dream come true. "We thoroughly enjoyed the trip and at no point felt unsafe," said Monika Kumari.

According to Bumb, the more women step out in public places, the safer it will be for others to travel. "In spite of all the heinous crimes, which have generated a lot of negative publicity for the country, adversely impacting its travel sector, it is still a beautiful country," said Bumb.