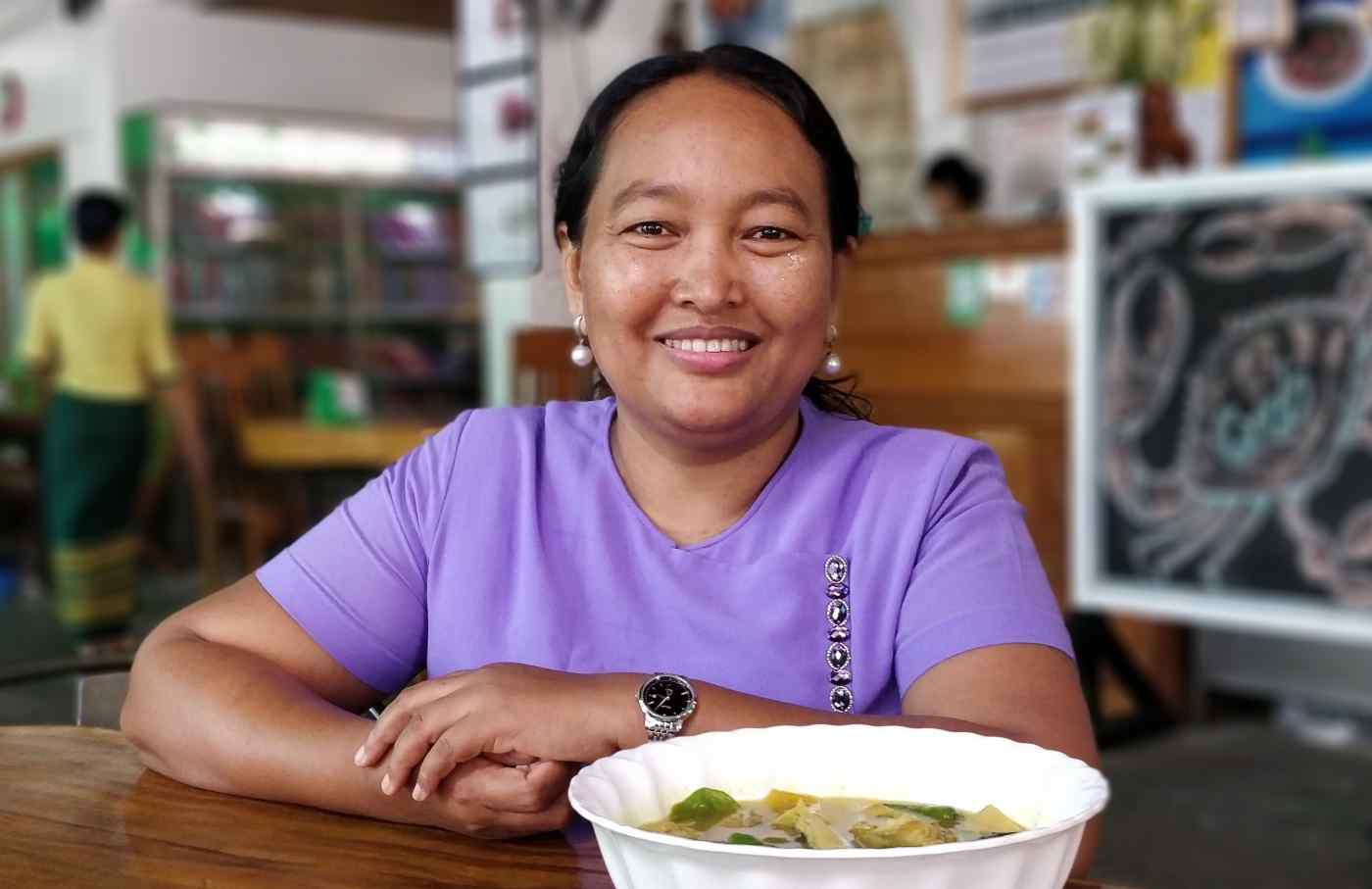 YANGON -- In 1987, when Khin Khin San was 13, she began selling bowls of mont ti fish soup under the shade of a tamarind tree in the western Myanmar state of Rakhine, where the rice noodle dish is fishier and fierier than elsewhere in the country.

Sometimes she would hawk mont ti with her grandmother and mother around Myebon, her hometown, which lies on a sliver of land between two rivers emptying into the Bay of Bengal. Usually, her stock would sell out by lunchtime, earning the equivalent of $1 on a good day.

Khin Khin San, who is also widely known as May Cho (Sweet Mother), has never stopped selling noodles. Today, though, she is a dollar millionaire, offering a menu ranging from crab curry and grilled tiger prawns to steamed grouper fish, squid salad and shellfish soup.

Far from her days of mixing ingredients on the street, she now runs nine restaurants and four wholesale fishmongers under the Min Lan brand, named for the street where she set up her first stall in Yangon. The business turns over about 120 million kyat ($86,000) a month, according to Khin Khin San's husband, Kyaw Swar Tun, who handles Min Lan's security, hygiene, kitchen equipment and accounts.

"Being successful requires a lot of willpower and mental strength," Khin Khin San told the Nikkei Asian Review at her circle-shaped restaurant near Yangon's Kandawgyi Lake, a popular recreational area for city residents, where floor-to-ceiling windows overlook palm trees and water views. "I had to remind myself that what I did determined whether I lived or starved." 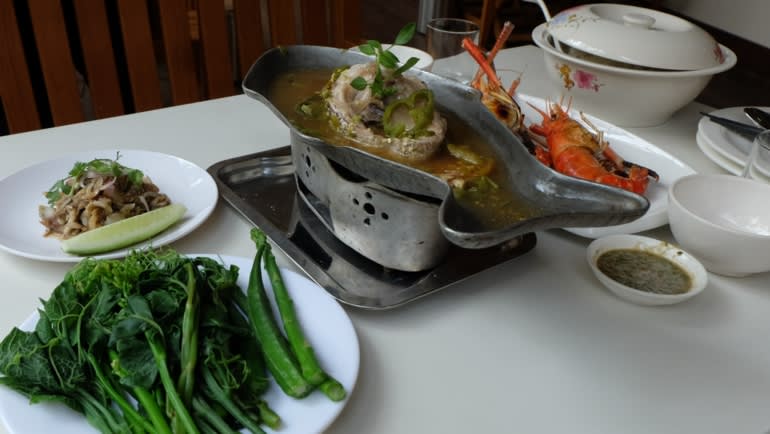 A seafood lunch at a Min Lan restaurant in Yangon. (Lorcan Lovett)

In normal times, Khin Khin San's restaurants feed 3,000 customers a day, served by a staff of 600. For the moment, Myanmar's lockdown amid the COVID-19 pandemic has put a stop to that, although it is not clear how long business will be interrupted.

Yangon's regional government ordered people to stay indoors for most of April, a slow period anyway for business in Myanmar, with many retail and food stores closing for the Burmese New Year celebrations. This year, the celebrations were nearly all canceled due to pandemic fears.

Khin Khin San said she does not expect people to rush back to her restaurants when the prohibition on social mingling is lifted, but tutorials on the chain's Facebook page will allow customers to order raw ingredients from Min Lan and cook its dishes at home.

Currently two Min Lan branches are open and operating under the guidance of the government's Covid-19 measures, which includes placing partitioning screens on the tables and taking customers temperatures. Another branch reopened on June 1.

Staff numbers have been temporarily halved, with those who live outside Yangon receiving a month and a half's salary when the restaurants closed on April 9 and those remaining in the city receiving a month's salary. Kyaw Swar Tun expects all employees to return and all restaurants to be running by August. 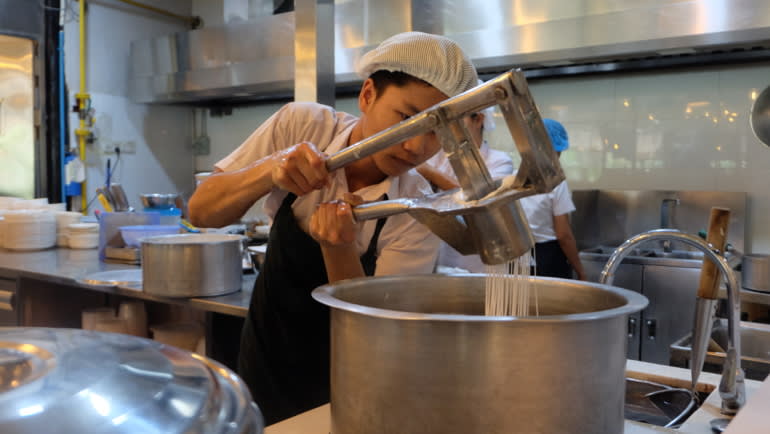 "Many people were ordering a ton of fresh seafood before we closed," she said. "My guess is they want to try cooking Min Lan cuisine themselves." The company also offers takeaway food, which has become increasingly popular since Myanmar confirmed its first COVID-19 cases on March 24.

Khin Khin San's rag-to-riches story started in 1999, when she moved to Yangon with her mother and sister, following a brother and aunt who had moved there earlier from Rakhine. They arrived in the city with savings of just 150,000 kyat and their recipe for mont ti. "I wasn't scared or nervous. I was coming here to do a job, and I was going to do it the best that I could," Khin Khin San said.

The three women worked at her aunt's noodle stall for two months before enlisting the help of construction workers to fashion discarded wood into their own stand, which turned out to be a flop. Low on money, they gambled on a new stall in 2002, this time choosing a patch of pavement in a neighborhood favored by other migrants from Rakhine. 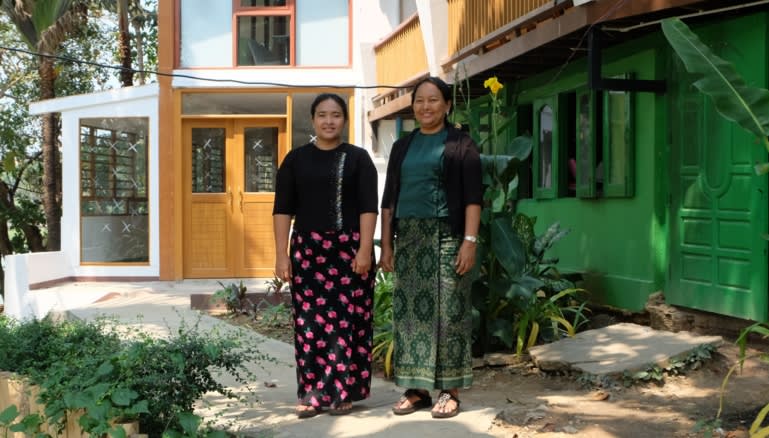 Khin Khin San claimed the stall's mont ti impressed migrants, who yearned for the flavors of home. Other vendors prepared their noodles and soaked them in oil the night before sale, but Khin Khin San arranged for a night bus from Rakhine to deliver them fresh each morning.

The business was a success, but some locals complained that the stall obstructed street parking, said Khin Khin San. "There were times I couldn't help but feel upset by what they would say," she recalled. "Sometimes I wanted to just stop what I was doing and go back home, but I kept at it."

After a year, the women shifted their business from the roadside to the ground floor of a nearby building, where Khin Khin San was able to save about 75,000 kyat a month, which she invested in gold because she "didn't understand how banks worked." Min Lan sells a range of its own products at some of its restaurants, including fish crackers and turmeric. (Lorcan Lovett)

She knew seafood, though, as does her sister Khin Khin Phyu. Both said that their late grandfather, a fisherman, would have been disappointed with the insipid fillets served in the city. "We kept buying and testing seafood from Yangon's wet markets and it just wasn't the same," said Khin Khin Phyu. "When we had shellfish, it was so bad we had to spit it out."

To raise quality, they arranged in 2005 for express bus transportation of freshly caught cuttlefish direct from Rakhine fishermen. It would be years before Min Lan acquired its own cold-storage trucks and containers to transport live fish, but its potential became clear in 2007, when Khin Khin San opened a second branch in north Yangon and registered the business formally.

Three years later, Khin Khin San embraced the banking system and applied for loans to expand Min Lan, starting with a restaurant near Inya Lake, a scenic recreational area in Yangon. As Myanmar's biggest city fell for the chain's punchy sea fare, she also sold her gold to buy a house. Tiger prawns in the cooler room of a Min Lan restaurant in Yangon. (Lorcan Lovett)

Between 2012 and 2019 Min Lan opened five more restaurants in Yangon and one in Ngapali Beach, the most popular attraction in their home state. Six of the nine restaurants have 15 tables, two have 40 tables and one has 50 tables.

Several overseas investors have approached the company with expansion propositions, said Khin Khin San, including a Taiwanese businesswoman who flew her to Taipei. "She showed me all the sights, gave me really good food, and proposed that we opened a branch in Taiwan," said Khin Khin San.

On another occasion, she said, a U.S. businessman proposed a franchise venture to open more outlets across Myanmar. But Khin Khin San declined both proposals, preferring to retain full control over food quality. "If our company was in it for the profits, it wouldn't be as successful as it is now," she said. "Our menu, to us, is all the food we like to eat. We wouldn't put on an item that we don't genuinely enjoy."

For now, Khin Khin San's mother and sister are supervising the company's main kitchen in eastern Yangon, which supplies the other Yangon-based restaurants, while Khin Khin San occasionally steps into the kitchen to help.

Franchising, she said, remains a possible way of expanding the business in the future, but her immediate priority -- coronavirus permitting -- is to create a reputation for quality.