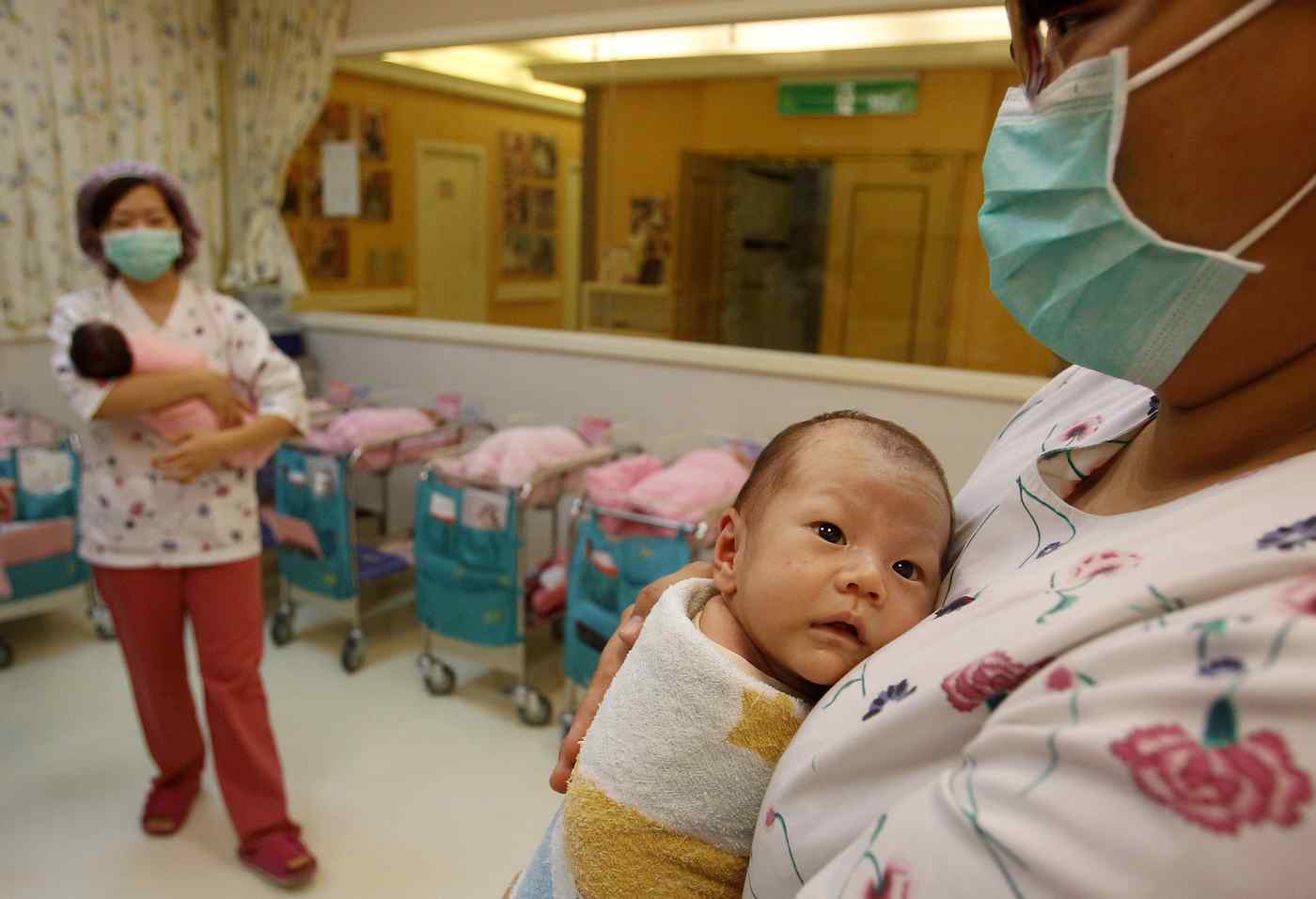 TAIPEI -- In February 2020, Gao, a 32-year-old administrative officer working in the Hsinchu Science Park, a technology hub southwest of Taipei, fell over in the office. She was pregnant, a doctor told her, but her excitement ended when she was abruptly dismissed by her employer, Dase-Sing Packaging Technology. The company said the COVID-19 pandemic had forced it to restructure, but Gao was the only employee let go.

Gao took the dismissal order to court, and won her case in November. Her story encapsulates the deep-rooted pregnancy discrimination in many Taiwanese companies. It also highlights the fear among many young working women of leaving their jobs temporarily to give birth -- a sentiment that is undermining the Taiwan government's efforts to boost the country's alarmingly low birthrate.

In 2020, the island state recorded negative population growth for the first time since records began, with 173,156 deaths and 165,249 births, according to the Ministry of the Interior. That compares with more than 400,000 births a year during the baby boom after World War II.

The announcement was not a surprise. Taiwan has hovered around the bottom of the global fertility league for years. In April, it ranked last among 227 countries and regions surveyed by the U.S. Central Intelligence Agency, with just 1.07 births per woman -- far below the rate of 2.1 needed to maintain its 23.5 million population.

Worse, negative population growth will be permanent, according to the National Development Council, Taiwan's national policy-planning agency. The NDC forecasts that Taiwan will become "superaged" in 2025, with more than 20% of its population over 65 years old, rising to 30% in 2040. Meanwhile, the population will plummet to less than 20 million in 2052, with births falling to less than 100,000 in 2054. 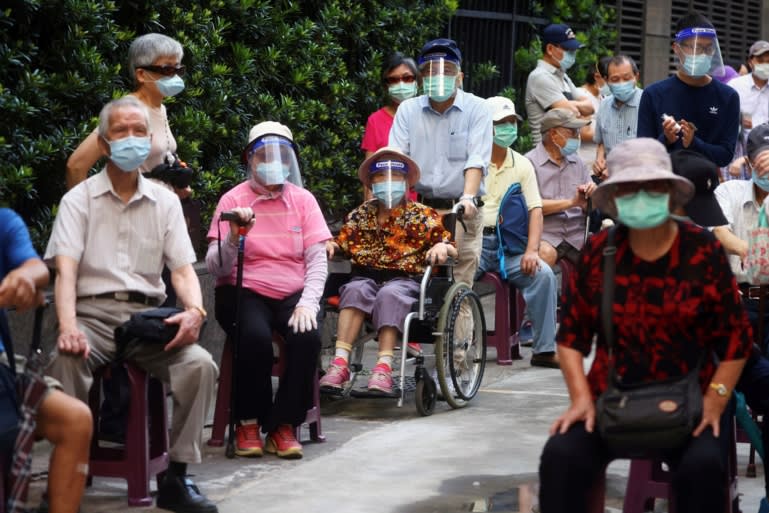 "If [the] low birthrate persists, Taiwan will lose its demographic dividend in 2028, with the working population accounting for less than two-thirds of the entire demographics, a threat to the country's economic productivity," the NDC said.

That prospect presents a frightening picture for Taiwan, potentially threatening living standards, employment, retirement income and the health of its dynamic economy, which is driven by manufacturing and exports of electronics, machinery and petrochemicals. In the long term, a manpower shortage would also affect Taiwan's military forces, hampering the island's ability to defend itself.

One reason for the low birthrate is thought to be low growth in incomes compared with property, rental and commodity prices, which increases the real cost of having and raising children. Using statistics compiled from government data, Sinyi Realty, a real estate broker, says that property prices in Taipei rose by 202% between 2001 and 2020, while average salaries grew by only 80%. Numbeo, a global cost-of-living database, calculates that an average buyer needs 31.45 years' income to buy an average property in Taipei -- the 10th-highest ratio among 502 cities surveyed globally.

Pregnancy discrimination, particularly among employees of small and midsize companies, is also discouraging many women from having children. For new mothers, maternity leave sometimes leads to demotion, pay cuts or even job losses as companies find replacements during their child care leave. Taiwanese President Tsai Ing-wen holds the baby of a staff member. The government is introducing various measures aimed at making child raising more attractive, but slow income growth relative to the uptick in property, rental and commodity prices is working against such incentives. (Courtesy of the Office of the President, ROC (Taiwan))

Many women say they are asked personal questions about marital status or childbearing plans at job interviews, even though such practices are forbidden by gender equality and employment laws. ''As a newlywed woman at the job interview, I felt the hiring manager assumed that having a baby will be my next plan in line," Alice Sun said in a heated Facebook post during a debate on the birthrate issue.

"When the issue of pregnancy was brought to the table, I knew immediately that the job was gone, though I was qualified in education and professional requirements. For a moment, I felt that my marriage was a punishment."

Sun's experience is echoed by many. A recent survey carried out by the employment agency 1111 found that 35.6% of around 1,400 female members had taken maternity leave. Only 16.3% of the total sample resumed their original positions, with 6.9% switching careers and 12.4% losing their jobs. More than a quarter of the latter category said their roles had been reassigned while they were on maternity leave. Men are eligible for leave to support new mothers, but accounted for only 18.6% of child care leave in 2020.

Taiwan's treatment of pregnant women compares badly with many other developed countries. Ines Tu, a Taiwanese professional in London who became pregnant with her second child while on probation at a property company, says she was offered flexible working to ease her discomfort during the earlier stage of pregnancy. Commuters are seen at a railway station in Taipei on December 2020. Many Taiwanese women say they are asked personal questions about marital status or childbearing plans at job interviews, even though such practices are forbidden by gender equality and employment laws.   © Getty Images

"In England, being a pregnant career woman is privileged, respected and cared for," said Tu, who is also pursuing a doctoral degree part-time. "The positive corporate sentiment, coupled with a well-established and stable welfare system for children, despite often being abused, takes pressure off women to let them freely decide what age to give birth and how many babies to have."

Richard Chiou-yuan Lu, a family and divorce law attorney at Universal Master Law Office in Taipei, said Taiwan's patriarchal society is a disincentive for many women who might consider marriage and child rearing, especially outside the capital.

"Marrying a man essentially means marrying his whole family, as the wife is expected to deliver babies to carry on the family name while also caring for generations young and old, apart from the chores," said Lu. ''With their careers being jeopardized by pregnancy, some women would start to ponder, 'What's in having kids for me?'" Yen-hsin Alice Cheng, a research fellow in sociology at Academia Sinica, Taiwan's national academy, said the main cause of the dwindling birthrate is that fewer women are marrying, while having children outside wedlock remains rare because unmarried mothers face discrimination and stigmatization in Taiwan's socially conservative society.

Cheng said married women born before 1965 had two or more children on average. However, the single population has grown rapidly over the last three decades, with the proportion of men and women remaining unmarried until the age of 50 rising from 2-3% before 1990 to nearly 20% in 2019.

A 2019 survey of women aged 15 to 64 conducted by Taiwan's Ministry of Health and Welfare found that 38.6% of women said they were uninterested in marriage, up from 12.4% in 2011. The proportion of births outside marriage has remained steady at less than 4% for four decades.

In an effort to reverse the decline in the birthrate the government moved in May to widen access to in vitro fertilization for women who have not conceived naturally. Married women under 45 are now entitled to up to six subsidized treatments, depending on age, and up to 28,000 couples are expected to benefit each year. 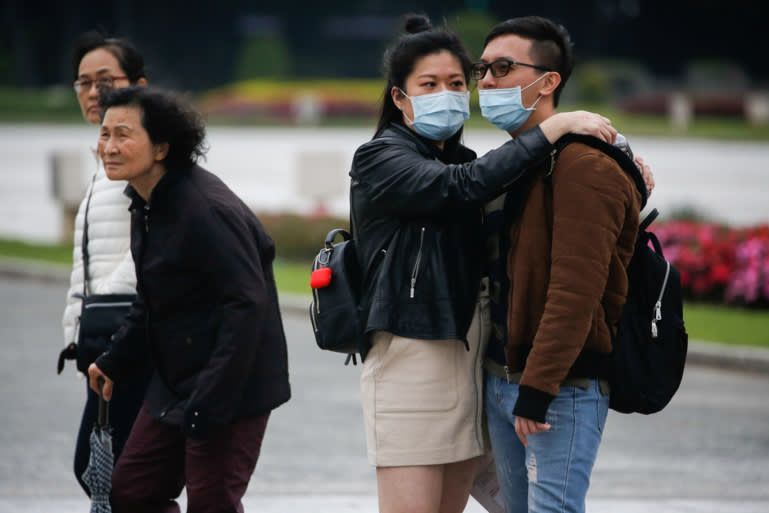 A couple embrace in Taipei in March 2020. The main cause of the dwindling birthrate is that fewer women are marrying, says Yen-hsin Alice Cheng, a research fellow in sociology at Academia Sinica, Taiwan’s national academy.   © Reuters

In further efforts to make child raising more attractive, pregnant women will also be offered more free antenatal care checkups, while parental leave payments have been increased from 60% of average insured earnings to 80% for up to six months. By 2023, government subsidies in this segment will reach NT$85 billion ($3 billion).

The new policies have been widely welcomed, but critics say they are unlikely to have a significant impact on the birthrate. ''People don't balk at delivering babies but are intimidated by unaffordibility of quality education and housing for kids," said one contributor to a debate on social media.

"What people need are safe public child care provided for parents working late, a norm in Taiwan; higher salaries, and [a] clampdown [on] property prices," the writer added. Taiwan has few public child care centers -- places are assigned by lot, while private centers are expensive and offer variable quality. There have been some cases of child abuse.

Thung-Hong Lin, a research fellow at Academia Sinica, said the government would do better to focus on managing the impact of the falling birthrate, especially by raising the retirement age in order to ease pressure on funding of health care and other benefits for retirees, which will fall on a smaller productive workforce in each successive year.

"The government might consider adjusting the labor policy and defer the retirement age to allow a certain portion of healthy and productive-aged workers to stay at jobs for a few more years. They can still contribute to the workforce instead of just living on pensions," said Lin.

''To achieve the goals, a set of laws [need to be] to be amended, including lifting society's rooted age discrimination mindset at work."