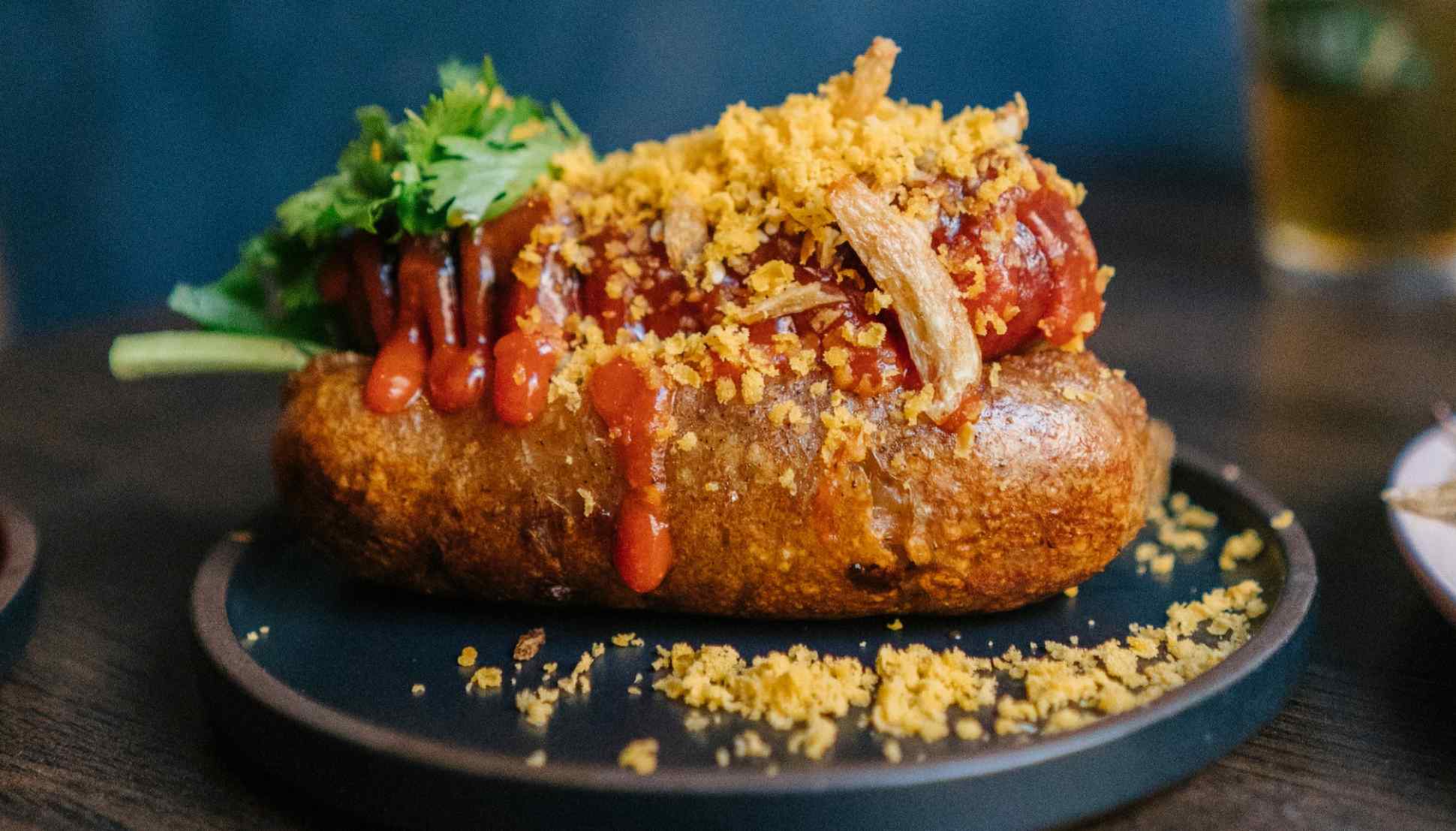 A modern take on a Taiwanese classic: sausage wrapped in sticky rice at 886 in Manhattan (Photo by Ben Hon)
Life

Cheap and cheerful rechao restaurants are a cultural institution

TAIPEI -- Taiwan is well-known for its dining scene, from its crowded night markets to dumplings, guabao (steamed pork buns) and boba tea. But the rechao, a classic Taiwanese dining experience on par with Japanese izakaya or Cantonese dim sum restaurants, has so far stayed off the international radar. That may be changing.

Long a top destination for Asian foodies, Taiwan welcomed a record 11 million tourists last year, including a growing number of North Americans and Europeans. Many headed for the Din Tai Fung restaurant in Taipei, famous for its Shanghai-style soup dumplings, which has branches in North America and has just opened another in London.

Taipei's culinary attractions were recognized in 2018 by Michelin Group, the French food guide publisher and tire company, which awarded star ratings to 20 restaurants, four of which were considered to be serving Taiwanese cuisine, the others Chinese, Japanese and European.

"Taipei is a city that has incredibly rich gastronomic history and the variety of cuisines is amazing," said Michael Ellis, international director of the Michelin guides. The publisher also nodded to Taiwan's night market culture, recommending several street food stalls. 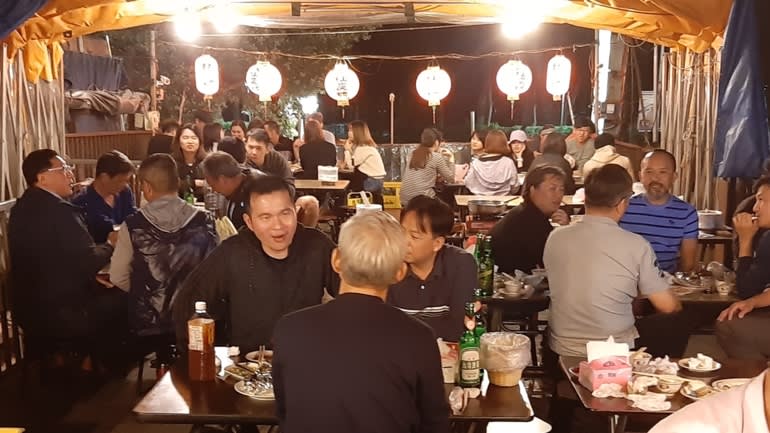 Composed of the Chinese characters for "hot" and "stir-fry," rechao food brings together almost all the influences that have shaped Taiwan's culinary landscape, including local plants originally consumed by the island's indigenous Austronesian peoples and Taiwanese takes on Japanese and Chinese regional cuisines.

Katy Hui-wen Hung, co-author with Steven Crook of "A Culinary History of Taipei," published in 2018, said rechao restaurants became popular in Taipei in the 1970s, originally focusing on seafood brought from the port city of Keelung, 30 km away. "When cooking, high heat was used to kill any bacteria," she said, explaining the origins of the rechao name.

Today rechao menus feature seafood alongside meat and vegetable dishes, often served on low tables with plastic stools. For many Taiwanese, the rechao experience is an opportunity to socialize as well as a place to grab a cheap, tasty meal. Beer tends to be consumed in large quantities, and the atmosphere can get quite lively. 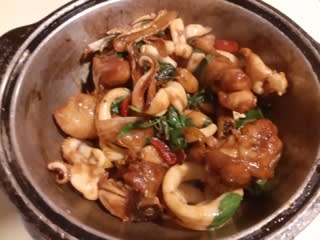 Three-cup chicken and squid, as prepared at Eight Immortals Grill in Taipei (Photo by Chris Horton)

Cooked with one cupful of soy sauce, one of sesame oil, one of rice wine and thick slices of ginger that take on an almost meat-like texture, three-cup chicken's origins lie in China, where it was slow cooked. "In Taiwan, three-cup chicken is cooked quickly at a much higher heat," said Hung. "Taiwanese added Thai basil and served it in a steel pot."

Joyce Hsu, owner of Eight Immortals Grill, a rechao restaurant near central Taipei's Da'an Forest Park, said that much of Taiwanese cuisine was a local adaptation of Chinese dishes, such as kung pao shrimp balls.

"Often, Taiwanese dishes either change the ingredients in a Chinese dish, or the way that a dish is cooked," Hsu said. "Our vegetables also tend to be a little different from other places. Taiwanese eggplant is too skinny to grill like they do in China or Japan, so we'll stir-fry it in sweet soy sauce with Thai basil." In addition to Chinese lineage, Eight Immortals' menu has Japanese influences, including Japanese yam salad, bamboo shoots with sweet mayonnaise and, like most rechao establishments, plates of sashimi.

The most popular dish, however, is stinky tofu, which Eight Immortals cooks in aluminum foil in a spicy fish broth. "Taiwanese love stinky tofu," Hsu said. "Foreigners, not so much." 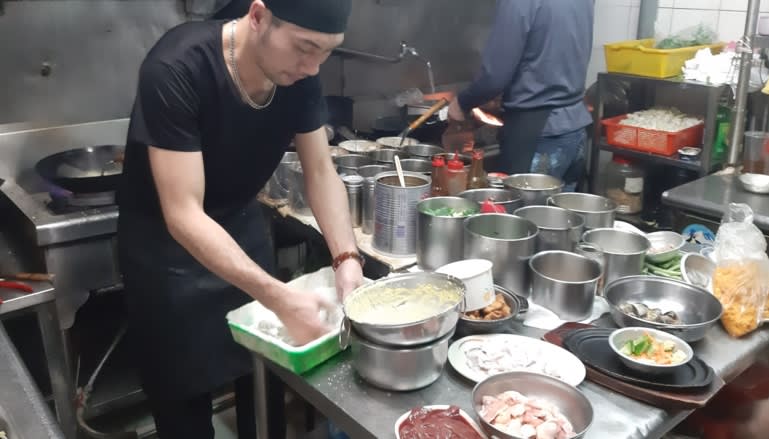 Cooks at Eight Immortals Grill in Taipei are battering and stir-frying food during the dinner rush. (Photo by Chris Horton)

Even so, many of Taiwan's foreign residents love rechao restaurants, despite never having encountered them in their home countries. That may change, as rechao culture is beginning to spread beyond Taiwan's borders. "I wanted to bring the Taiwanese rechao experience to my customers," said Sze, a native of Taipei. "My approach to the menu was just to put together what I saw as a kid."

McDonald's chicken sandwiches were a part of Sze's childhood as well, and are reflected in his reinterpretation, featuring a battered and deboned deep-fried chicken leg with the skin on, topped with daikon (radish) slaw and spicy ketchup. Chicken wings cooked in a three-cup glaze are also on the menu.

Sze said he is hoping to bring rechao-style dining culture to the U.S., emulating the success of Japanese and Korean restaurants in branding themselves as places to drink and hang out with friends after eating. His 886 restaurant serves only two kinds of beer: Taiwan Beer's gold label lager and its lychee-flavored beer.

"The best thing about Taiwan's rechao," he said, "is you have millionaires and people making minimum wage at the same place, drinking no small amount of beer, and eating humble but delicious food."