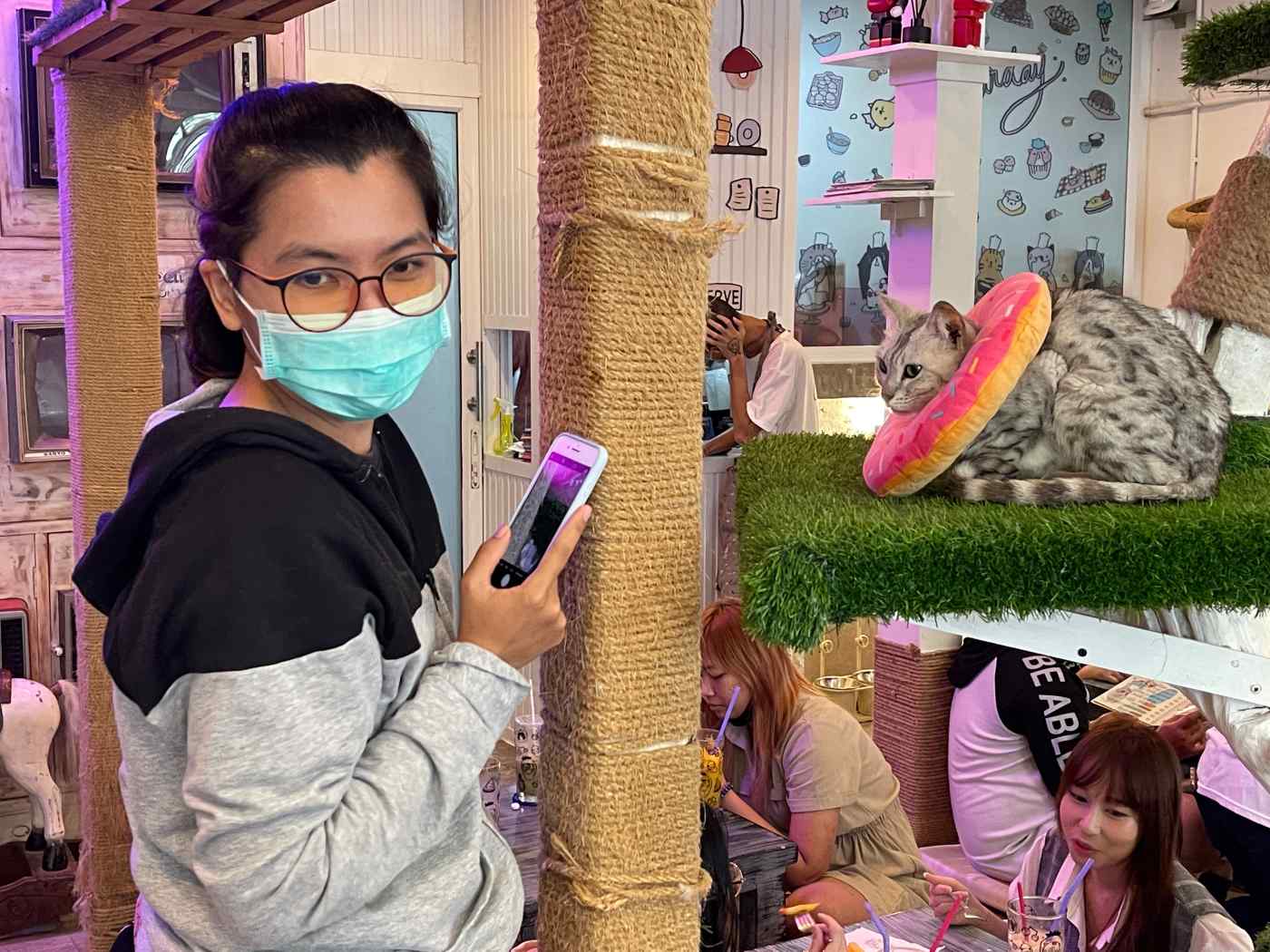 BANGKOK -- The staycation starts with Sunday brunch, featuring all of her favorite treats. Then, a park walk and spa treatment. Candlelight room service, of course. Nothing is too good for one's sweetheart, even the four-legged kind.

Such is the case at the Kimpton Maa-Lai, one of Bangkok's newest, "hip" hotels, where the Craft cafe buzzes with animal life every weekend. Some might say it is "barking mad."

"We get it all, and not just dogs and cats," said the hotel's general manager Patrick Both, as the lobby filled with a menagerie of furry guests. "Also ferrets, birds, rabbits ... and one very expensive chicken," he added with a chuckle. "Our policy is, if it can fit in an elevator, it's allowed."

Opening a hotel in the midst of a pandemic is a challenging proposition, especially as Thailand's borders remain closed to all but a handful of the 40 million visitors who arrived the year before. Still, the Kimpton has made a huge splash, opening its pet-friendly cafe in July, and the hotel in October. Both have proved to be purr-fect fits with Bangkok pet owners.

"It's fantastic to be able to go to a nice hotel, with all the amenities, and bring along your pets," said Singaporean Russell Lee, sitting in the lobby on a recent Sunday. The four-year Bangkok resident was on an overnight stay with his entire family -- his human partner and their two huge dogs: a Doberman and a husky mix. 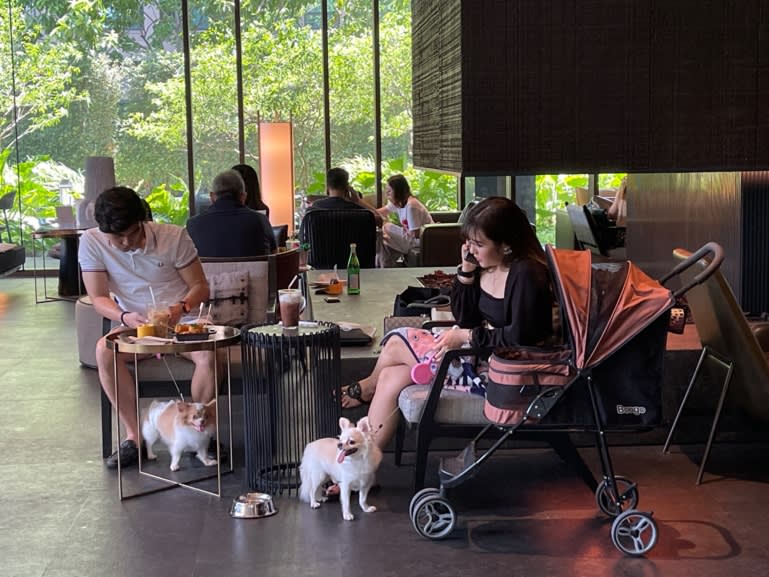 Pampered pets fill the lobby of the animal-friendly Kimpton Maa-Lai, one of Bangkok’s newest, "hip" hotels. (Photo by Ron Gluckman)

Their lives largely center around the dogs, in a city lacking pet space, Lee said. Bangkok ranks among the world's cities with the lowest density of parks and public space per capita. Hence, weekends typically involve lengthy travel to hillside walks or visits with other frustrated pet owners. The Kimpton offered a welcome break.

"This is really convenient. If we go out, we have to find someone to take care of our dogs," he said. "It can be a hassle. And the Kimpton is really accommodating. They put out water for the dogs and do a great job of making us feel welcome."

The pet-friendly policy is not mere pandemic positioning, Both said. It has been policy ever since dog-lover Bill Kimpton launched his first hotel in the U.S. 30 years ago. The boutique hotel chain was acquired in 2015 by industry behemoth IHG Hotels & Resorts, which is maintaining Kimpton's pet-friendly approach. In Bangkok, the brand has gone upscale, into ultraluxury territory, with several other properties planned in Asia. The Kimpton has been embraced by Bangkok's elite, who fill the lobby with meticulously groomed pets, often delivered by chauffeur. They also arrive in expensive strollers, accompanied by high-end luggage. This is a pet-watching paradise. "It's quite a scene," Both said.

And it is not alone. Bangkok abounds with cafes catering to dogs and cats, said Jay Spencer, the former owner of Barkyard, now closed but once the premium option for local pet lovers. "Before, pet ownership was rather small in Bangkok," he said. "But that has really changed in recent years, and now there are lots of businesses catering to pets."

Barkyard is widely considered the pioneer. Opened in 2014 on a nearly 3,000-sq.-meter site, it was dubbed "Club Med for pets" by local media. Barkyard boasted a dog hotel, a pet pool and businesses catering to pampered pets, including a leather shop making collars and leashes. Owners dined in cafes as pets were groomed, and roamed the parklike setting amid signage for "Central Bark" and "Barkingham Palace." Just another day at Caturday. (Photo by Ron Gluckman)

Barkyard closed in 2016, when Spencer's family sold the site. Yet Spencer, who is Thai-British, believes the local pet industry has ample upside. He has three Beagles, and said Thai pet ownership is growing along with rising incomes, as in much of Asia. Studies bear this out.

The world's pet industry was estimated to be worth over $125 billion in 2018, according to the American Pet Products Association. The lion's share of that sum was rung up in the U.S., where the pet industry topped $100 billion in 2020. But China is one of the fastest-growing markets, with urban Chinese eagerly adding house pets that were long banned by the Communist Party government.

Growth is brisk across Asia, according to data from Peak Recruitment, a Bangkok business serving animal agriculture and agribusiness markets. While the world's pet industry has grown about 5% per year for two decades, the rate across the Asia-Pacific region has topped 14% annually for the past five years. 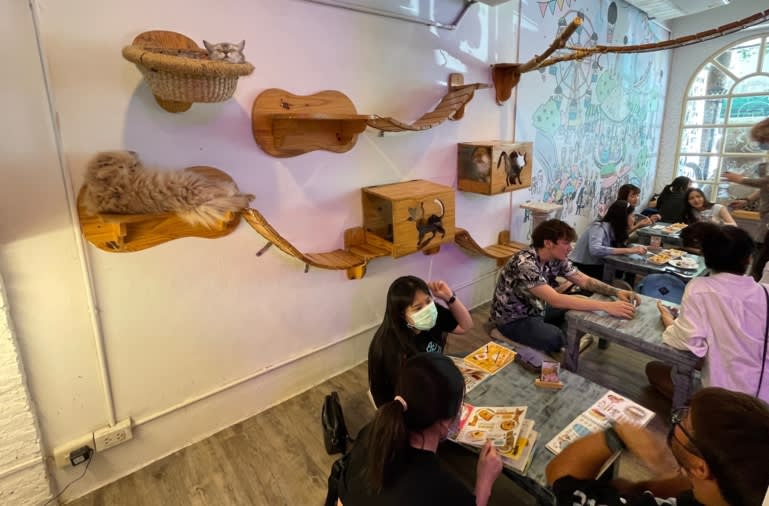 Cats are everywhere -- in shelves, on ladders and walkways -- at Caturday. (Photo by Ron Gluckman)

Bangkok still ranks low for pet ownership, probably because of a scarcity of parks and a housing market dominated by apartments rather than houses with yards. Many condominiums ban pets. "This shortage of public space creates opportunities for entrepreneurs," Spencer said.

Many businesses have moved into the market, including Trail and Trail and Dog Park 49, offering park space, grooming, shops and rooms for pets while owners traveling, or in quarantine. Bangkok restaurants increasingly offer animal-friendly policies. Even EmQuartier, an upmarket mall, allows pets in some venues. At the mall's D'Ark restaurant, diners can choose outside tables, dropping treats under the table to their dogs.

The most pet-friendly mall is K Village, where pets can roam a breezy open area, with lots of foliage and flowing water. Many specialist shops also cater to critters, including Pet Mak, a pet department store stocking food, strollers, beds, toys, clothing and accessories.

Cat owners can also visit the popular Bangkok feline-focused business Caturday Cat Cafe, where up to 50 cats roam the premises, with customers forming wait lines every weekend for french fries, smoothies and snacks. Cats are everywhere: on wooden shelves, overhead walkways, ladders, in baskets beside tables and on scores of welcoming laps.

Caturday owner Arisa Limpanawongsanon said she found the popular formula by accident after initially opening a milk tea cafe. Her brother posted pictures of her cat, Ketchup, who quickly gained a huge following. "People were coming to the cafe hoping to meet Ketchup," she said. "He became a star of Instagram." 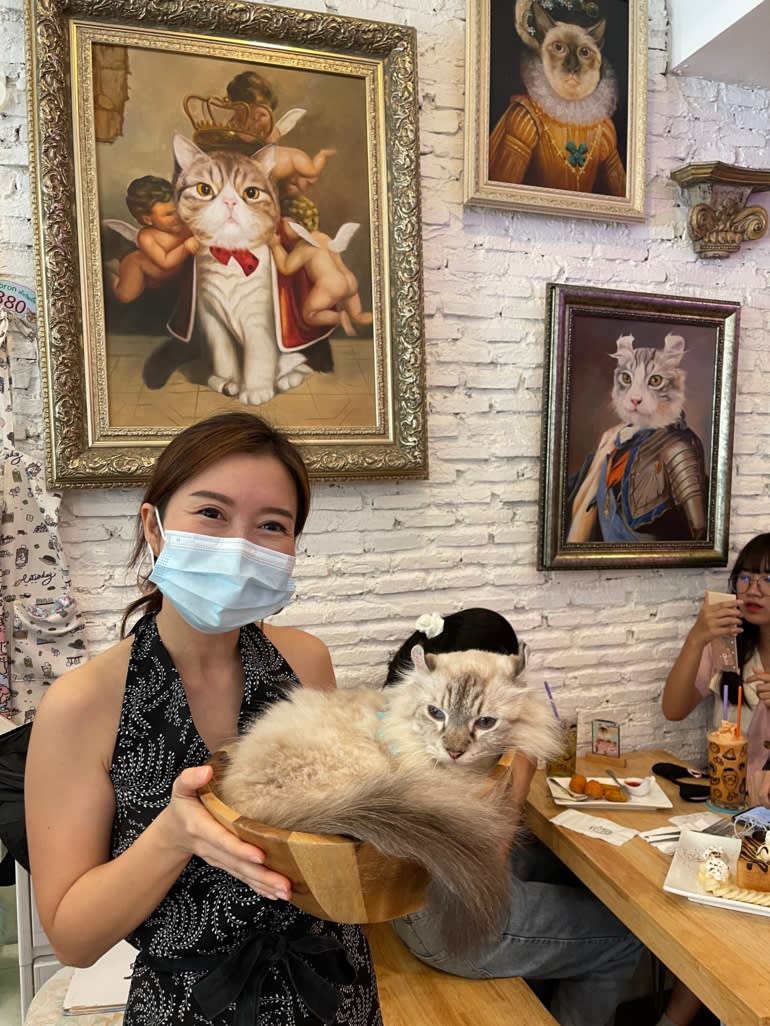 Top: K Village is the most pet-friendly mall among new Bangkok businesses. Bottom: Caturday owner Arisa Limpanawongsanon in front of a portrait of her cat Ketchup. (Photos by Ron Gluckman)

Arisa started with five cats at Caturday -- which celebrated its seventh anniversary in February. The idea was an instant hit, with crowds of cat-lovers joining her own menagerie. She now keeps about 50 cats, and shuffles them in and out of the cafe depending on their moods. "I want them to be in good spirits for visitors," she said.

Mostly, the cats laze around, claw toys or pose for cooing cat fans. Walls are packed with big paintings of cats, including Ketchup. Visitors are largely cat lovers who do not have their own cats, Arisa said. She limits them to 90-minute sessions on weekends, charging 200 baht ($6.40) for entry, which can be used as credit toward food and drink purchases.

Caturday is part of a trend toward animal-themed outlets in the Thai capital, where you can also commune in cafes with dogs and exotic animals like meerkats, raccoons, rabbits and birds. But nobody pampers pets and their owners as thoroughly as the Kimpton, where seven floors have been set aside for pets. The hotel cleans rooms for animals in the hotel and residences especially thoroughly, but there is no charge for the pets. Allen Gora with his pair of Pugs, in the lobby of the Kimpton. (Photo by Ron Gluckman)

Mixing pets with guests does pose challenges, Both said. "But it's a plank of the Kimpton brand, and people really love it." Frills include a pet menu with delights like doggy ice cream. And the cafe opens onto to a huge garden, where staff walk dogs while owners dine. "This is the first place that is pet-friendly at this level," Both added. "We've gotten great feedback and response in Bangkok."

The payoff includes a valuable boost in guest numbers during the pandemic. Allen Gora, from the Philippines, has been residing at the Kimpton since September. He works for hotels in Phuket, but with tourism constrained, spends most of his time in Bangkok, in a serviced apartment with his partner and two Pugs, Hachiko and Bentley.

"The Kimpton is great for dogs. It's so hard to find places that allow pets in Bangkok," he said. "We love it. They are more than pet friendly. They offer a lot of services that really make us feel welcome."

Nothing matches the pleasure of being in the company of other pet people, Gora added, surrounded in the lobby by visitors coming to pet his Pugs. "We feel at home here and love being around other pet lovers."