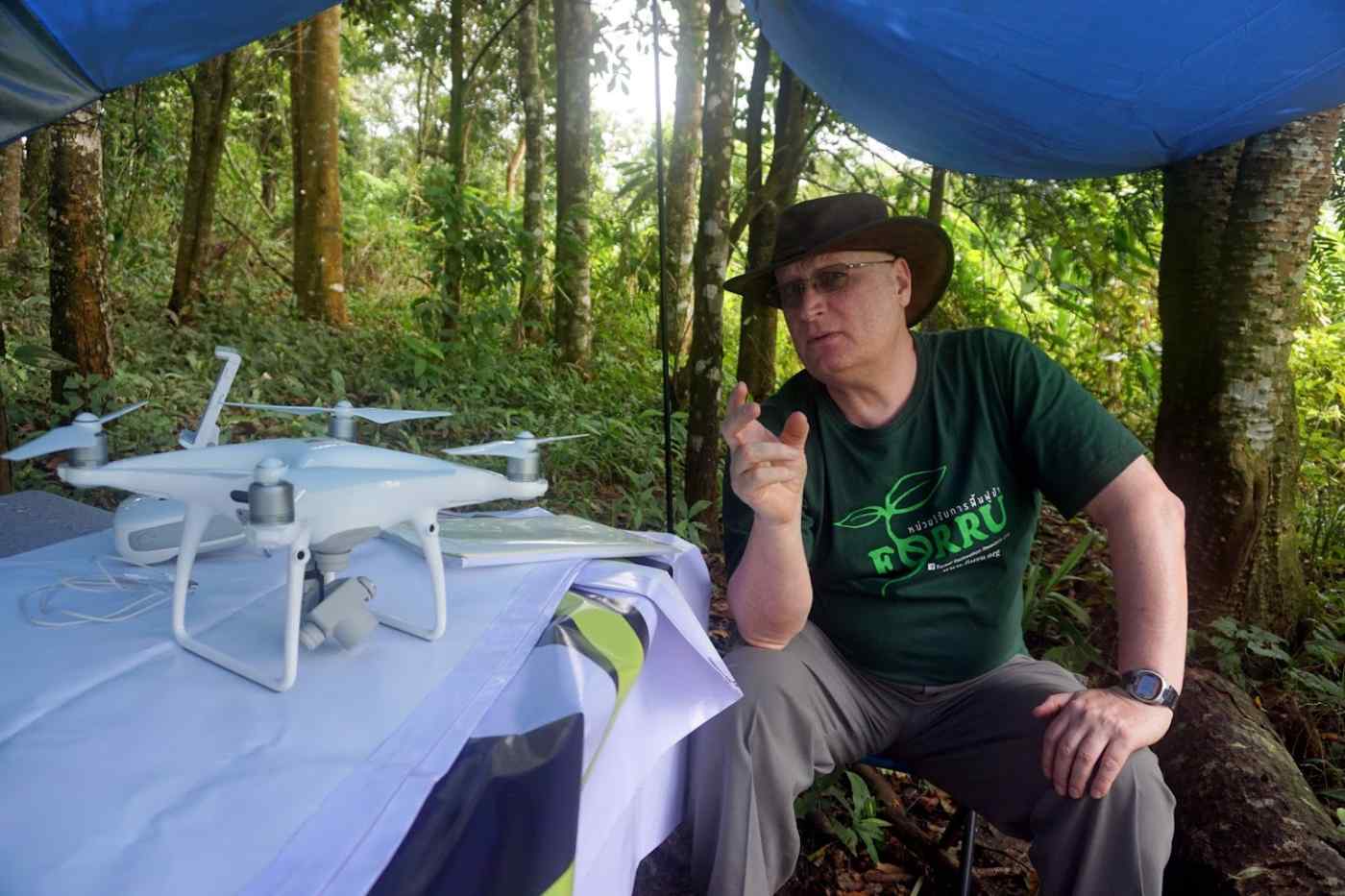 Biologist Stephen Elliott ponders the use of drones in what has been his life’s work -- the regrowth of tropical forests destroyed by man and natural causes. (Photo by Denis Gray)
DENIS D. GRAY, Contributing writerNovember 18, 2017 13:10 JST | Thailand
CopyCopied

MAE SA MAI, Thailand -- The Phantom whirred skyward, hovered, then veered off to skim over a tropical forest, peering into its tangled, soaring canopy. It was a test mission for this agile drone -- not to target an enemy hiding below, but to bring new life to woodlands by ''bombing'' them with cascades of seeds.

Directing the drone team from a grassy knoll at the forest's edge was Stephen Elliott, a biologist and pioneer in the regrowth of perhaps the earth's most complex ecosystem -- a tropical forest. Now, he is breaching another frontier: preparing to harness drones for work that currently requires intensive manual labor in remote, treacherous terrain where humans are loathe to tread. 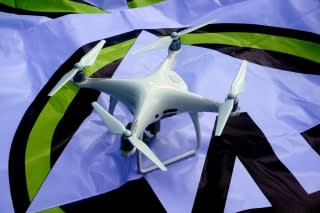 A drone, mounted with an air gun, will be able to seed a hectare of deforested land in less than half an hour -- a job that would take four people using conventional tree-planting methods more than six sweaty days.

These savings in time and effort could help to combat climate change by promoting a global recovery for forests, which are being felled at a rate of some 48 football fields every minute, according to the World Wide Fund for Nature. To suck climate change-inducing carbon dioxide out of the atmosphere, the United Nations' New York Declaration on Forests in 2014 set a goal to reforest 350 million hectares -- an area the size of India -- by the year 2030.

Elliott and others are skeptical about reaching this target, but view drones as essential accelerators. ''We are still using hoes and (weed-chopping) machetes to replant forests. To accomplish massive reforestation we have to drag the technology from the Stone Age to the drone age,'' the British scientist told the Nikkei Asian Review. To bring about this transformation, Elliott helped to organize the first conference on drone reforesting in 2015 in Chiang Mai, northern Thailand, where he set up the Forest Restoration Research Unit at Chiang Mai University more than two decades ago. 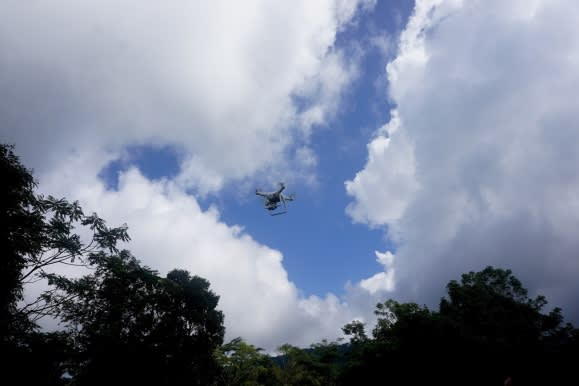 A drone hovers over a tropical forest canopy in a test by a team of scientists. (Photo by Denis Gray)

Since the conference, drone reforestation has taken off with remarkable speed. Elliott's team is supported by the university, research grants and donations, and the concept is also being developed, tested, or is in initial operation from India to the Pacific northwest of the United States. For example, U.K.-based BioCarbon Engineering, which says it aims to plant 1 billion trees a year, is restoring wilderness areas of Britain, former mines in Australia and devastated mangroves in Myanmar's Irrawaddy Delta, according to CEO Lauren Fletcher, an ex-NASA engineer who worked on the search for life on Mars. Upcoming projects for governments, large corporations, nongovernmental organizations and private landholders are scheduled in half a dozen other countries.

"Just a few years ago this [use of drones] began as a joke,'' Elliott said, laughingly adding that he thought he would lose some of his academic standing if he championed the aerial robots. ''But after some work on it, we decided it was time to come out of the closet.''

Reforestation from above, he points out, is hardly new; it was probably first adopted in Japan through the ancient practice of tsuchi dango, or earth dumping, in which seed balls enclosed in clay are dispersed in grenade-throwing style over fields. Seed-bombing, as it is usually called, was reintroduced in the 1930s by Nasanobu Fukuoka, a leading proponent of natural farming. Aerial seeding made its debut in 1926, when aircraft were used to revive burned tropical forest in Hawaii.

Elliott foresees drones largely replacing -- and advancing -- the expensive, sometimes imprecise work of aircraft across the spectrum, from assessing deforested areas to tracking the growth of drone-seeded trees and eradicating noxious weeds.

Before that day comes, however, a significant amount of work remains to be done, in combination with engineers. "A young forest, growing up from drone-deposited seeds, here in northern Thailand, is still a few years away,'' Elliott said. A key issue yet to be resolved is the ''delivery vehicle'' -- how to drop seeds into the ground so that they have the best chance of germinating. Should they be inserted into a ''bomb'' or released as pellets -- a cheaper option, but perhaps less effective if the pellets roll around without penetrating the earth.

One design put forward at the 2015 conference would consist of a biodegradable, dart-like cone that would penetrate the soil before releasing its contents -- which in addition to seeds might also include forest soil, fertilizer, plant hormones or even a rodent repellant. (One suggestion is cat's urine from a litter box.)

Elliott's team of young Thai scientists is also working on perhaps the biggest problem -- finding an effective, eco-friendly killer of weeds, the biggest enemies of the tiny seedlings that might emerge from aerial seeding. One possibility is to develop ''bioherbicides'' from chemicals that are naturally produced by some tree species as defenses against weeds and grasses. Drones might also be configured for ''smart spraying'' -- distinguishing between weeds and trees, so that only the weeds are attacked without harming the young trees growing among them.

The team's testing ground is located around Mae Sa Mai, a village of some 1,800 Hmong ethnic minority farmers, where Elliott's unit has successfully restored forests felled by the villagers for crop planting or consumed by fires. Camera traps have revealed the return of many animals, including wild cats, Indian civets and hog badgers -- a sure sign of the recovery of a healthy forest. One plot, planted less than a decade ago with seedlings of 29 tree species, is now home to the seedlings of more than 100 tree species, mostly dispersed as seeds by birds. 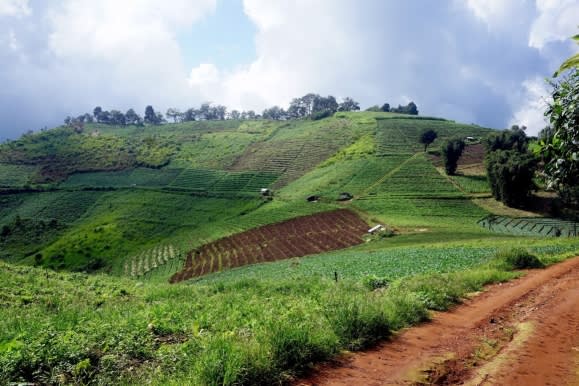 Many hills around the village of Mae Sa Mai have been stripped for crop farming, but the area is now the site of a pioneering project to regrow tropical forests. (Photo by Denis Gray)

One of the most useful restoration tasks that can be easily accomplished by off-the-shelf drones is monitoring forest recovery. On a recent test day, Elliott's team put the Phantom 4 Pro, purchased for $2,500 from China's Da-Jiang Innovations Science and Technology Company, through its paces over newly reforested hillsides above the Hmong village. Flying along pre-programmed paths, it pinpointed positions on the ground, taking still photographs for image analysis, together with some stunning, panoramic videos. The ability to look at the forest from the same point in space, month after month, will make possible effortless monitoring of how quickly fields of weeds are transformed back into forests.

As the drone patrolled overhead, Elliott strode through the forest talking about individual trees as a father might speak about his children. He knows the times of their inception, how fast they have grown, the problems they have faced. And he talks about how drones will better be able to revive the tropical forests to which his career has been devoted -- constructing three-dimensional images, flying for hours on solar-powered batteries, measuring the potential of forested areas to absorb carbon while autonomously avoiding objects in their path ... all once the stuff of science fiction.