KOH PHANGAN, Thailand -- In the late afternoon sun, a long line of sandals snakes down the beachfront road in Thong Sala, the main town on Koh Phangan, a tourist island in the Gulf of Thailand famed for its scenic settings and laid-back beach life.

Visited by 1 million travelers in 2019, Koh Phangan's primary draw has long been its monthly Full Moon Party, which attracts between 10,000 and 30,000 young revelers a month from around the world to Haad Rin Beach in the southeast corner of the island.

But the footwear in this queue belongs to migrant workers, and a few stranded tourists, waiting for a "charity booth" in front of the Signature restaurant to open. Every afternoon at 5:30 p.m., Signature's Belgian owner Quentin Seynaeve and his team serve free food to anyone who has run out of cash.

Thailand's international tourism trade dried up in late March as flights were curtailed. But some tourists stayed on at Koh Phangan and other popular resort destinations, choosing to sit out the pandemic in Thailand. Much larger numbers of migrant workers, mostly from neighboring Myanmar, have also remained, with no work or income.

"On March 25, the government closed all bars, restaurants and hotels," said Seynaeve. "I offered my staff accommodation and food if they did a bit of work for me. Some stayed. I had worked with them for nine years and I felt I had to give something back. Keeping social distancing in mind, locals, migrant workers and foreign visitors line up for free food at a food bank in Thong Sala, the principal town on Koh Phangan. (Photo by Tom Vater)

"We started with a small table. Thai people who own small restaurants came to help. Some resorts and bakeries also chipped in. Now we feed some 450 people with cooked and dry food every day."

Under the banner "Koh Phangan Today For Tomorrow," numerous other food banks distribute more than 4,000 meals around the island every day. The local authorities make sure that social distancing is strictly observed, and all those queuing must have their temperatures taken. Quentin Seynaeve, owner of the Signature restaurant in Thong Sala and one of the organizers of a food bank that serves 450 meals every afternoon in town. (Photo by Tom Vater)

"The jobs aren't coming back anytime soon, so I expect that food initiatives will need to continue for at least three months," said Seynaeve. He estimates that 65% of the people who flock to his charity stall are Burmese workers who could not return home before Thailand closed its land borders, 35% are migrant workers from around Thailand and the remainder are travelers stranded after the closure of Thai airspace on April 4. Thais with residency papers can access daily food deliveries from local authorities.

Signature's chef, Ko Than Aung, a former schoolteacher from Rakhine State in western Myanmar, said the island's 4,000 workers from Myanmar were trapped in a "precarious" situation, destined to either fall into destitution in Thailand or languish in quarantine camps set up by the Myanmar government. "Most resorts simply kicked them out," he said. "When the border reopens, we will have to spend 21 days in a state-run quarantine center. We don't know what to do. At home there is nothing, but if tourists don't come back, we will be forced to leave." 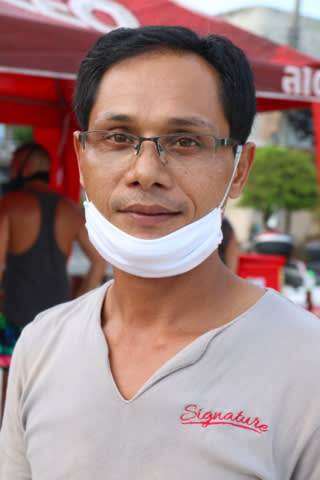 Ko Than Aung, a former schoolteacher from Rakhine, in Myanmar, and now the chef at Signature. (Photo by Tom Vater)

Ko Than Aung said the food banks that have emerged on Koh Phangan are helping migrants, but more is needed. "Some people are too shy to approach us. Others borrow money in the community at horrendous interest rates," he said. "The big bosses of the island need to get together to ensure that everyone survives this period."

Stuart McDonald, co-founder of Travelfish, an Australian-run Southeast Asia travel website, also said Thailand needed to offer more help to migrant workers. "The [Burmese] workers underpin Thailand's island economy. That has long been the dirty secret behind the cheap food and accommodation on Koh Tao and Koh Phangan in particular." Koh Tao is a neighboring island.

McDonald added: "Legal protection needs to be instigated for these workers, who are often terribly exploited in near-indentured labor work environments. Thailand has had more than 30 years [of tourism industry growth] to address this, and little has changed."

A group of local politicians and residents is attempting to switch from short-term gain to long-term community investment. Inland from Ban Tai, on the island's south coast, a local business owner has given a 0.8-hectare plot of land to a collective farming project. Local municipal officials have donated cash to buy seeds, and tractors are plowing the dry ground, with ponds being turned into shrimp and catfish farms. 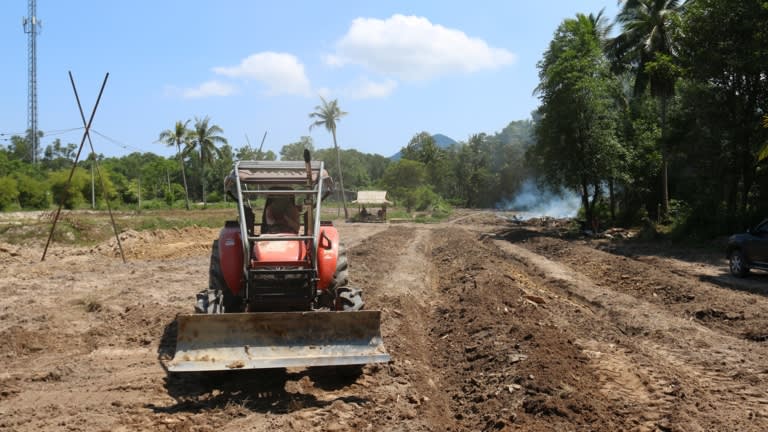 Volunteers clear land in Ban Tai to create a farm that will grow produce to help feed those on the island in need due to the impact of the coronavirus. (Photo by Tom Vater)

"We know the tourists won't be back soon, so we decided to start growing food," said Nest Jongjit, owner of a construction company and a member of the municipal council. "Everyone is welcome to lend a hand. In return they will have access to the food produced. If this pilot project works, we want to extend it across the island."

Pirat Promcharoen, another local official, said the scheme was intended to make the island less dependent on food imports. "We want to work with foreign business owners and workers from all communities living here," he said. "We'd like to turn the tourism industry into a more sustainable community-oriented affair."

The tourist industry was under strain in Thailand even before the novel coronavirus that causes COVID-19 emerged in January. A strong baht, severe air pollution in Bangkok and the northern region of Chiang Mai, overburdened infrastructure and competition from resorts elsewhere in Southeast Asia have made the country less attractive to Western visitors, although there has been an explosion of Chinese travelers. 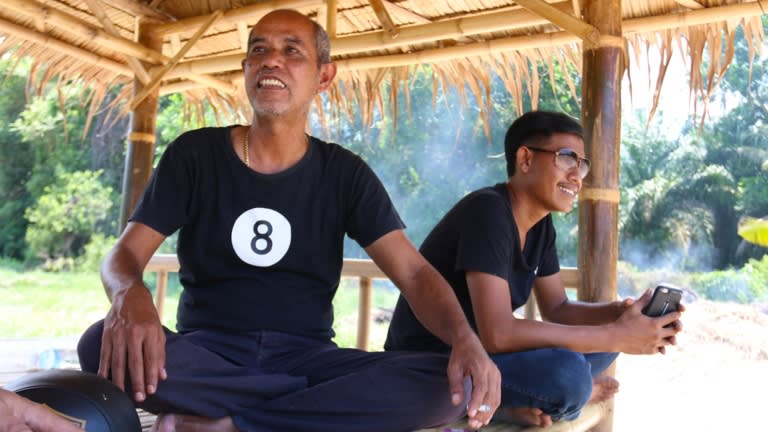 In 2019, almost 40 million foreign travelers entered the country, spending 1.93 trillion baht ($60.4 billion). But the number of international tourists is forecast to fall by 65% this year, according to government estimates, threatening up to 10 million travel industry jobs, according to the University of the Thai Chamber of Commerce, Thailand's oldest private university.

Thailand's recovery from the economic dislocation caused by the pandemic is likely to be painful. But some in the tourism industry see the fall in tourist numbers as an opportunity to change course toward a more sustainable economic framework.

"The influx has resulted in destroyed reefs, trashed towns and vast overdevelopment," said McDonald. "Now there is an opportunity to reassess and take a longer-term view, if Thailand wants to be a destination our children will want to visit. Land encroachment, cheap 'cookie cutter' hotels, and low-cost flights have skewed how people travel, at the expense of second- and third-tier destinations that have withered on the vine." Usually humming with activity, the shops and stalls along the main road in Thong Sala are deserted. (Photo by Tom Vater)

The former fishing village of Haad Rin, the location of the Full Moon Party, offers a good example of what has gone wrong. Though hugely profitable, the event has turned the area into a tourist ghetto of concrete alleyways, while the beach is polluted by glass bottles, plastic straws and cigarette butts. While a 100 baht entry ticket has been introduced to pay for a beach clean-up and security, environmental pressures remain.

May 7 saw the party's third consecutive cancellation this year. Barely 200 people spent the early evening playing football, jogging or just soaking up the sunset. Already, though, there has been some environmental improvement, locals say. "I saw some coral growing back near the beach and the ocean is much cleaner," said Jim, who has worked at Tommy Resort for four years. "Of course, there is less money, but right now we are enjoying the peace and nature."

Jakkra Brande, owner of Nira's Home Bakery in Thong Sala, grew up in Haad Rin and saw the effects of the beach party's rising popularity. "The Full Moon Party has had a positive economic impact and it prevented rich people buying the land of the locals," he said. "But since 2006, there's been so much construction in the area, it has lost its charm. Visitors come for only three days a month so businesses have been dying for some time and investors are waiting to come in." 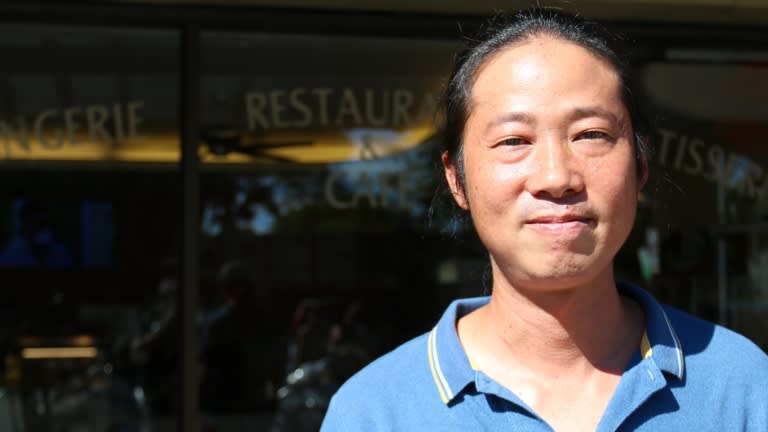 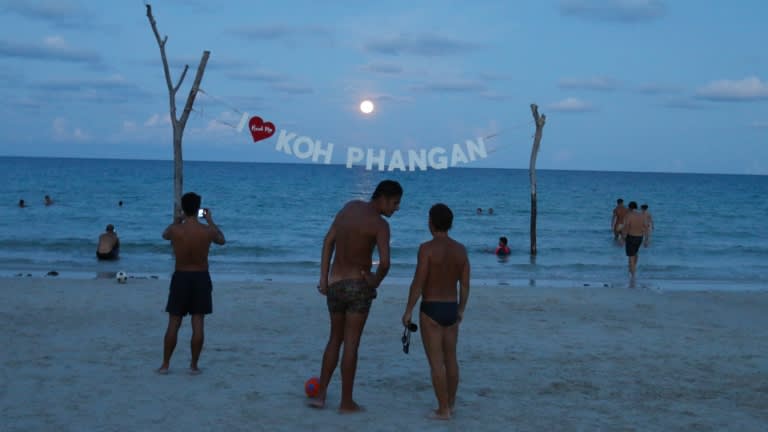 Top: Jakkra Brande, owner of Koh Phangan’s oldest bakery, says tourism on the island needs a rethink. Bottom: Haad Rin Beach, home of the Full Moon Party, is seen here on May 7. For only the second time in 30 years, the monthly bash -- which draws crowds of up to 30,000 people -- has been canceled. (Photos by Tom Vater)

There has been some diversification of the island's economy, including a newly designated luxury zone on the northeast coast and a wellness and yoga center at Sri Thanu on the west coast. Almost 50% of the island is a protected national park, offering opportunities for a less intrusive kind of tourism.

For Brande, this is a perfect time for rethinking. "We made a mistake at the beginning and destroyed Haad Rin's natural beauty because the central government never gave guidance," he said. "A new generation of islanders that has studied abroad is bringing fresh ideas on how to organize local tourism. We need to get rid of the concrete and rebuild in a more traditional style."

Most owners of tourist businesses in Koh Phangan are hoping for a return to more normal levels of business by the next high season in December. But whether the parties will return is anyone's guess, said Sharon Kahati, owner of The Phanganist, the island's media platform.

"Perhaps, as travelers come out of lockdown back home, they will feel like they deserve a reward," he said. But local businesses may have to adjust. "People may be willing to pay more for accommodation that has social distancing built into the experience, a secluded bungalow on the beach rather than a hostel stay."