Thai women go back to the kitchen -- to take charge BANGKOK -- Sujira "Aom" Pongmorn, whose year-old Saawaan Restaurant has become an outstanding example of Thai-style fine dining, says she will always remember the moment during her apprenticeship at Bangkok's Mandarin Oriental Hotel when an older male colleague told her, "You will never be a head chef because you're a woman."

"I couldn't believe it," she said. "I wanted to prove that anyone can be a leader."

For just such leadership, the latest Michelin Guide rankings for Thailand have already awarded her a much-coveted star. Of the 27 such accolades awarded to restaurants in this most prestigious of gourmet rankings, seven went to restaurants led by women (with several strong candidates likely to be added in the next edition). That ratio compares favorably with Asian cities such as Hong Kong, where only a single female earned a place among 80 star winners.

To mark International Women's Day on March 8, a conference on Women In Gastronomy, or WIG, held in a Bangkok hotel featured a panel discussion with no fewer than 11 women (one Japanese-born, the rest Thai) working at the top end of the local gourmet scene. These ranged from Nooror Somany Steppe, founder of The Blue Elephant chain of upmarket Thai restaurants to "Tam" Debhakam, a self-assured 25-year-old who recently won 1 million baht (30,000 dollars) on the first TV edition of Thailand's Top Chef, despite being the youngest competitor. 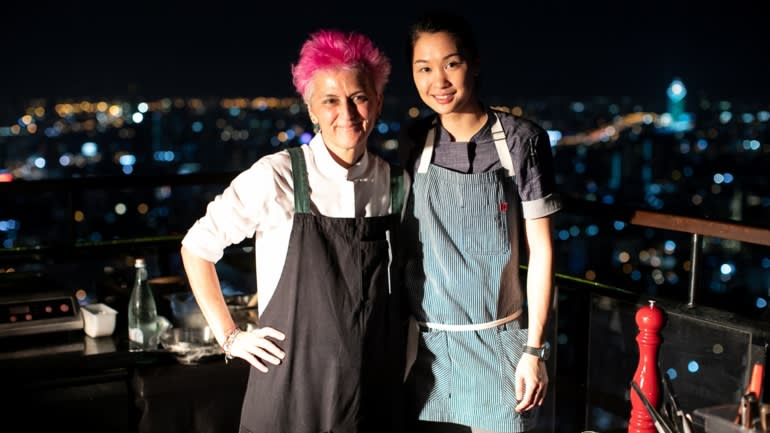 This success has been achieved despite the haughty and often ruthless male bosses who dominate the profession, and social norms that facilitate subordinate roles for women. These days, it seems, the most feminist statement in Thailand is being made not by women leaving the kitchen, but by those going in to take the heat.

One of the reasons is that Thai women are the mainstays of many home-style kitchens around the country. "Thai cuisine has always been the work of Thai women," said Pim Techawuanvivit, who recently took the helm of Bangkok's famed Nahm restaurant, commuting to her own renowned Kin Khao restaurant in San Francisco while another woman, Suraja Ruangnukulkit, oversees the Bangkok operation. "It helps that Thais tend to defer to those, no matter which sex, [who have] the social status of being in charge," said Pim. Suraja added: "It used to be [that] when a woman went to a restaurant for a job interview, the first question was always whether you had a family or children. But that's quickly becoming part of the story of the past, where every career is now for men or women."

Some chefs at the gastronomy conference suggested that the rise of women in Thai cuisine may have been assisted by Thailand's relatively easygoing approach to working relationships, compared with neighboring countries. But nearly all the rising female stars in Bangkok's fine dining scene told tales of summoning personal courage to overcome chauvinist barriers.

"In the beginning of our hotel training course," said Suraja, "nobody thought the women could carry the heavy stock pots. But soon I saw it was the men who dropped out of the program."

Most remarkable of all may be the accomplishments of Rungthiwa Chummongkhon, who returned to her native land in 2017 after a dozen years in Denmark to create and lead The Front Room, a dazzlingly ambitious attempt to create Southeast Asia's first Nordic-Thai restaurant as the flagship of Bangkok's Waldorf-Astoria Hotel.

The first time she attempted to get a job in the culinary world, Danish cooks reacted by refusing to consider "a little, soft-spoken Thai lady," Rungthiwa said. She began her cooking career helping her mother at a market stall outside Chiang Rai, in northern Thailand, and then went to vocational school to become a hairdresser. Always "wanting to better myself" and "loving to travel," she eventually helped to start two restaurants in Phuket, on Thailand's southwest coast, with the backing of a Russian travel agent.

When the 2004 tsunami wiped out one of the restaurants, she said, "I drove 24 hours north to my old home, with only one dog and 500 baht." Returning to hairdressing, she eventually met her Danish husband, who brought her to Europe and, while skeptical at first, did not stand in the way of her drive to become a professional cook.

"My first job was preparing food for thousands at a stadium -- I peeled a lot of potatoes," she recalled. Later, she experienced the tough side of kitchen work after convincing Danish-Lebanese chef Wassim Halal to give her a chance, "He would get so angry because I smiled if I did something wrong," she said.

Eventually, she worked for six months for no pay in Germany before joining the staff of Copenhagen's pathbreaking Noma restaurant. "For a long time," she joked," all my husband and I said to each other was 'good night' and 'good morning.'"

Others had a somewhat easier time. Saawaan's chef Sujira said her first culinary experience came at age six when her father was ill and told her to go to the fridge and make something to eat. "I had no idea what to do. I remember mixing egg yolks for an omelet with my hands. But I already thought, 'Gee, this is fun!'"

Pim, the daughter of a Bangkok lawyer, had a high-paying job "researching user experience with IT telephony" for Cisco Systems of the U.S. But she used business trips to France and Italy to begin a widely-admired food blog called Chez Pim, and eventually went further with her passion.

"At first," she said, "I didn't want to write about Thai cuisine, but I made it a project to teach myself Thai dishes each time I came home." Starting small, and concentrating on quality ingredients, she won a Michelin star for Kin Khao in its very first year. Her new career path left her father "bemused, and wanting to know if I still used any of the schooling he had paid for."

Suraja took the leap into the culinary world because she "didn't want to spend life in an office on a computer." While dreaming of working in kitchens in France, she ended up by chance under the tutelage of Nahm's Australian creator David Thompson -- whose "appetizers really taught me to distinguish flavors," and who let her work at the New York branch of Pok, another authentic Thai restaurant founded by a foreigner.

"When life was hard and I would cry," she confessed, "he told me to stick it out and not come home as a failure."

All the top women chefs noted they have had to modify their own behavior to reach the top. "I think women have more sensitive taste and are more detail-oriented," said Rungthiwa "Fae" Chummongkhon. "But coming home as the boss, I had to relearn the Thai way and become much softer." 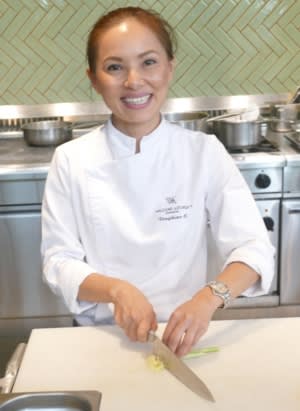 Chef "Fae" in the kitchens of The Front Room, where she's the one-woman creator of Nordic-Thai cuisine. (Photo by John Krich)

Suraja also said interaction with staff had been a difficult area. "There's a different way we have to talk with our male staff, I can't go so direct." Sexual harassment in the workplace had also presented problems, she said, adding: "We have to keep educating [people that] that's not acceptable."

Pim, who said that before taking over Nahm she "didn't know how to swear in Thai," said she demoted a male sous-chef in her San Francisco restaurant for sexist phone messages. "Of course, that's just the tip of the iceberg, especially back in Thailand with all the male attitudes about mistresses and such," she said.

"I always try to foster a good experience in the kitchen," Pim added. "I want to do all I can to support other women and make sure everyone feels empowered."

With women in charge, it seems that the style of Thai food is not changing so much as the atmosphere in the kitchen. "Still," Suraja joked, "I think the guys are OK for carrying pots."