BANGKOK -- Just like the infamous traffic jams of Bangkok, long queues of golf carts at the teeing grounds were once a common sight on Thailand's numerous golf courses. But those are now distant memories as the COVID-19 pandemic has halted the stream of hundreds of thousands of golfers who visited the kingdom every year. The recent second wave of local transmissions in the kingdom has discouraged local expatriates from hitting the greens.

But the authorities have now come up with an ingenious golf quarantine program that enables visitors and returning expatriates to do their two-week mandatory quarantine on golf courses, although it may not do much to stem the financial losses suffered by the tourist-dependent golfing industry.

"This is quite abnormal," said Masaya Furuta, managing director of the golfing division of Siam Motors Group, the auto parts group, as he reviewed the biweekly booking status report in early January of the company-owned Siam Country Club, a prestigious club near the beach resort of Pattaya.

"You would never see this at this time of the year. Most of the dates would be crossed out," he said, as he looked over the many vacant booking slots, even on weekends, which is usually the busiest time.

In tropical Thailand, the so-called dry season from November through February is known to be the best time for golfing. It is a period of little rain and cool temperatures that can drop below 20 C in the mornings and evenings, and is the preferred time for golfers escaping cold winters in Asian countries such as Japan and South Korea, as well as those in the U.S. and Europe. 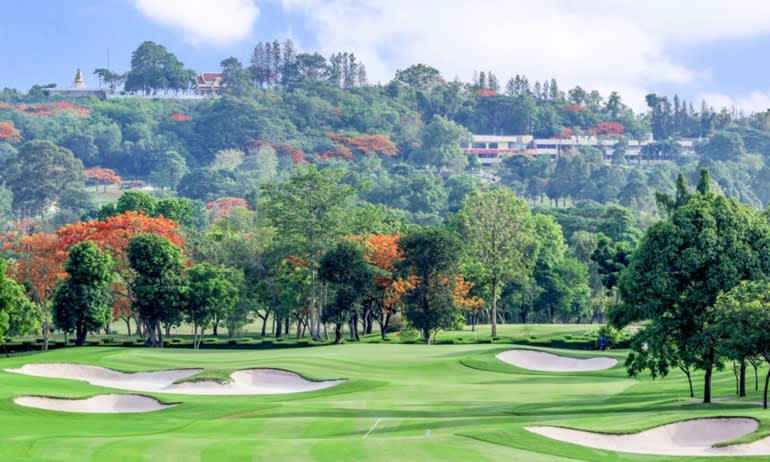 During the dry season, tee times at the four courses of the Siam Country Club, especially the award-winning Old Course, widely known for hosting the annual Ladies Professional Golf Association Thailand tournament, would normally be fully booked weeks in advance. Member golfers would be playing on the weekends with their guests, while visiting tourists would fill in the weekdays.

The Siam Country Club is a member-exclusive club, but nonmembers can book via designated agents to play on weekdays and weekend afternoons. These reservations, mostly made by international tourists, can account for as much as half the club's bookings. But after COVID-19 hit the country and borders were closed in March, this portion fell to nearly zero. Golf courses were also forced to close to locals as the country went into deep lockdown.

When the golf courses reopened in May, the absence of overseas golfers did not have much of an impact, Furuta said. It was Thailand's rainy season when many tourists do not come. Local golfers, relieved to be out of their homes, made up for any slack and visited the club more frequently since they had plenty of time on their hands. As recently as the year-end holiday season, the club "was nearly fully booked," said Furuta, as expats could not fly home to see their families and chose to golf instead. 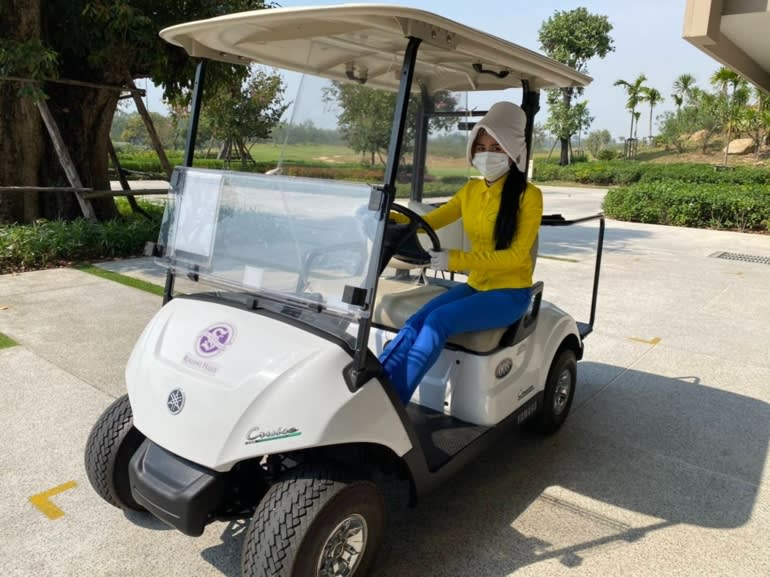 But since early January, the situation has changed drastically. Following a second wave of COVID-19 cases, the government designated areas in central Thailand, including Bangkok and Pattaya, as "red zones" and imposed stricter measures on traveling and gathering.

Although golf courses have stayed open, many expats, especially from the Japanese community, canceled their golf rounds and corporate competitions in line with company codes. At Siam Country Club, local bookings have dropped to half the level of last year.

"It was bad enough that we were losing inbound golfers but now the locals who were making up for them are also canceling," sighed Furuta. "Fingers crossed that the situation will improve and restrictions would be eased in February." 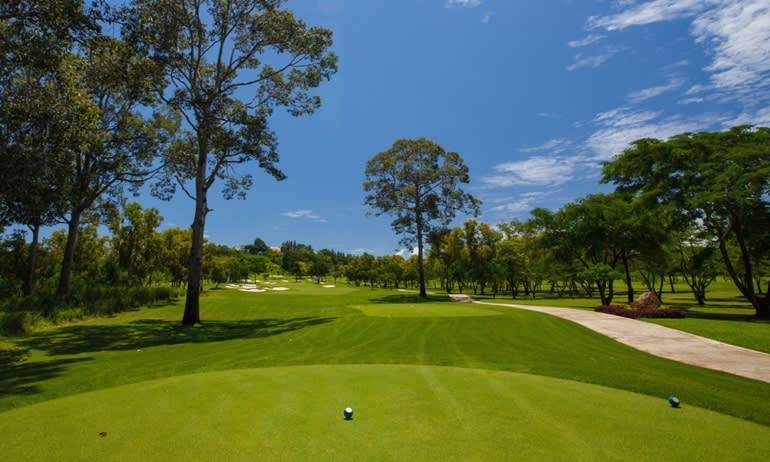 The story is much the same for the other 250 or so golf clubs in Thailand. In the past, about 80% of those playing in Thailand have been golfers from overseas, while only 20% were locals, according to Golfasian, a golf tour operator that handles bookings for players coming to Southeast Asia.

As golf vacations have become more popular, Southeast Asia has become a favorite golfing destination due to its tropical weather and reasonable prices. Thailand is a top choice in the region, welcoming 700,000 golfers each year, according to the Tourism Authority of Thailand. Thailand accounts for 75% of the bookings that Golfasian normally handles.

"Golfers came to Thailand because there were a lot of top-rated courses to choose from and prices were reasonable," said Boyd Barker, general manager of Golfasian. "They were also here to enjoy the whole golf experience -- playing with a caddie and having a golf cart [per player]."

Now all those golfers have disappeared and golf resorts are turning their sights on the local market. Thailand did start allowing tourists to enter the country in late 2020 but only on condition that they stay in quarantine at a hotel for 14 days, which consumes both time and money. As a result, few tourists have come.

Golf clubs are now fighting to attract the small slice of local golf players by offering generous promotions. Unico Grande, a Bangkok course where roughly 80% of pre-COVID customers were foreign tourists and expats, started a "buffet" golf promotion in November. Golfers can play as many rounds as they want all day with a single green fee of 450 baht ($15) on weekdays and 750 baht on weekends.

Clubs that were previously member-exclusive are now open to the general public. Alpine Golf Club, a championship course where Tiger Woods won his Asian tour in 2000, accepted direct bookings from nonmembers at 2,700 baht for a weekday round in January. The price, which includes a personal caddie and a golf cart, is cheaper than the price it offered its members' guests on weekdays before the pandemic.

Some golf clubs plan to turn themselves into quarantine venues. Thailand approved a "golf quarantine" program that allows people entering the country to do their mandatory 14-day quarantine at golf courses that have lodging facilities. Currently, six golf courses, all outside Bangkok, have been approved for the scheme. 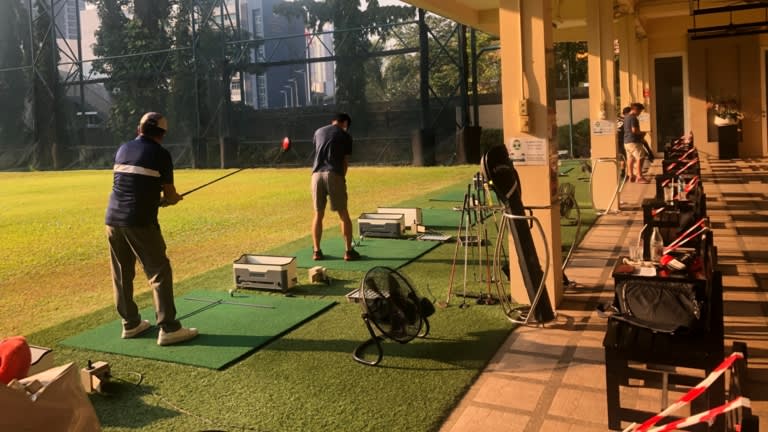 This driving range in central Bangkok attracted a lot of expats over the year-end holidays, as travel restrictions made it difficult for many to return home. Seats are taped off to promote social distancing. (Photo by Yukako Ono)

Under the program, travelers are allowed to play golf once they receive negative results from the COVID-19 tests they take during their stay. Detailed rules are expected to be announced in early February. Prices vary, but at Mida Golf Club in Kanchanaburi, west of Bangkok, quarantine packages are set to start at around 90,000 baht, including green and cart fees for unlimited rounds of golf. This is more than double the price of a quarantine package at more budget-oriented hotels in Bangkok.

Given that in normal hotel quarantines, travelers are either not allowed to leave their rooms or only allowed to take just a short stroll inside the hotel, some people might find the golf quarantine a better alternative, Barker said. Just a few days after the announcement of the golf quarantine scheme, Golfasian had already received a few hundred inquiries from abroad. Mida said it has had booking requests from South Korea, one of the club's strongest customer bases, and Finland that can proceed once authorities finalize detailed rules

But industry officials still remain cautious. Many golf courses are reluctant to join the program because they will be required to bar entry to regular customers so they do not mix with foreign tourists. "We can't just say no to our regular clients, especially to members who have already paid their annual memberships," a course operator said. 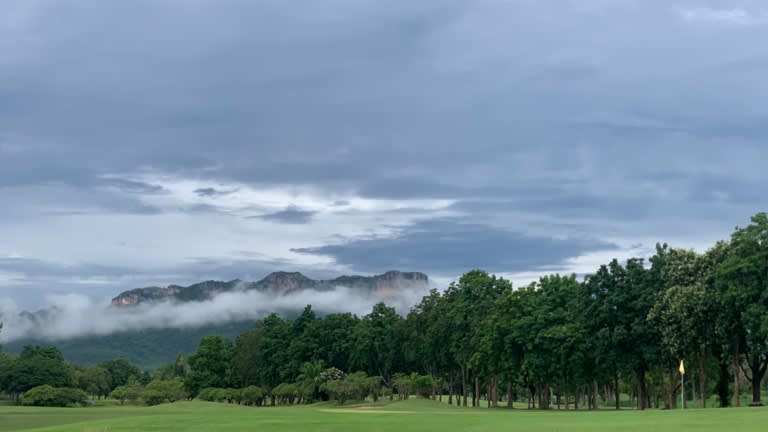 Barker said that another drawback is that the golf quarantine only applies to those traveling from a limited number of countries. "There are only 55 countries on the list ... and that excludes most of the high-risk countries like the U.S. and 98% of Europe. Only those Asian nations like Japan, Hong Kong, [South] Korea, Vietnam and Singapore are on the list. That is kind of a challenge because many of our inquiries are coming from the U.S., Germany, Switzerland and others in Europe," he explained.

The golf quarantine may only revive a tiny fraction of the traffic that Thailand has lost in the past year. "We see that 2022 will be the more realistic time that golfers will be traveling again [to Thailand] without restrictions," Barker said.

Some golf course operators are focusing more on local demand. Siam Country Club, which is opening a new golf course on the outskirts of Bangkok in November, is considering a membership program that would appeal to Thai golfers living in the area, not only expats and tourists. "COVID even restricted traveling within the country. We need to reach out more to the locals who will always be there for us," said Furuta.

One of the few bright sides of COVID is that more upper-middle-class Thais are playing golf thanks to the extra time they have and the lower golf fees. Some have taken up the sport from scratch, while others are returning after a long hiatus. Many are seeing the fairway as the best place to socialize in the "new normal" world.

"You can't socialize in the city anymore," said Bordin Unakul, a veteran banker who has been playing golf for 35 years. "We are all working from our homes and we can't sit for long in the cafes, but out on the course, I can feel COVID-free." He added that he is planning to take a week off from work in late January to play golf in Khao Yai, a mountain resort north of Bangkok, with old school friends. "I'm playing golf more than before," he chuckled.

"Although we have many golf courses, young Thais are not much into golf because we don't have local tournaments featuring local star players that they can look up to, like in the U.S. or Japan," said Bordin, who is also a board member of the Office of the Education Council under the Thai Education Ministry. "Maybe we should promote the sport more. Going out to the fields and socializing should be much healthier than playing video games at home."