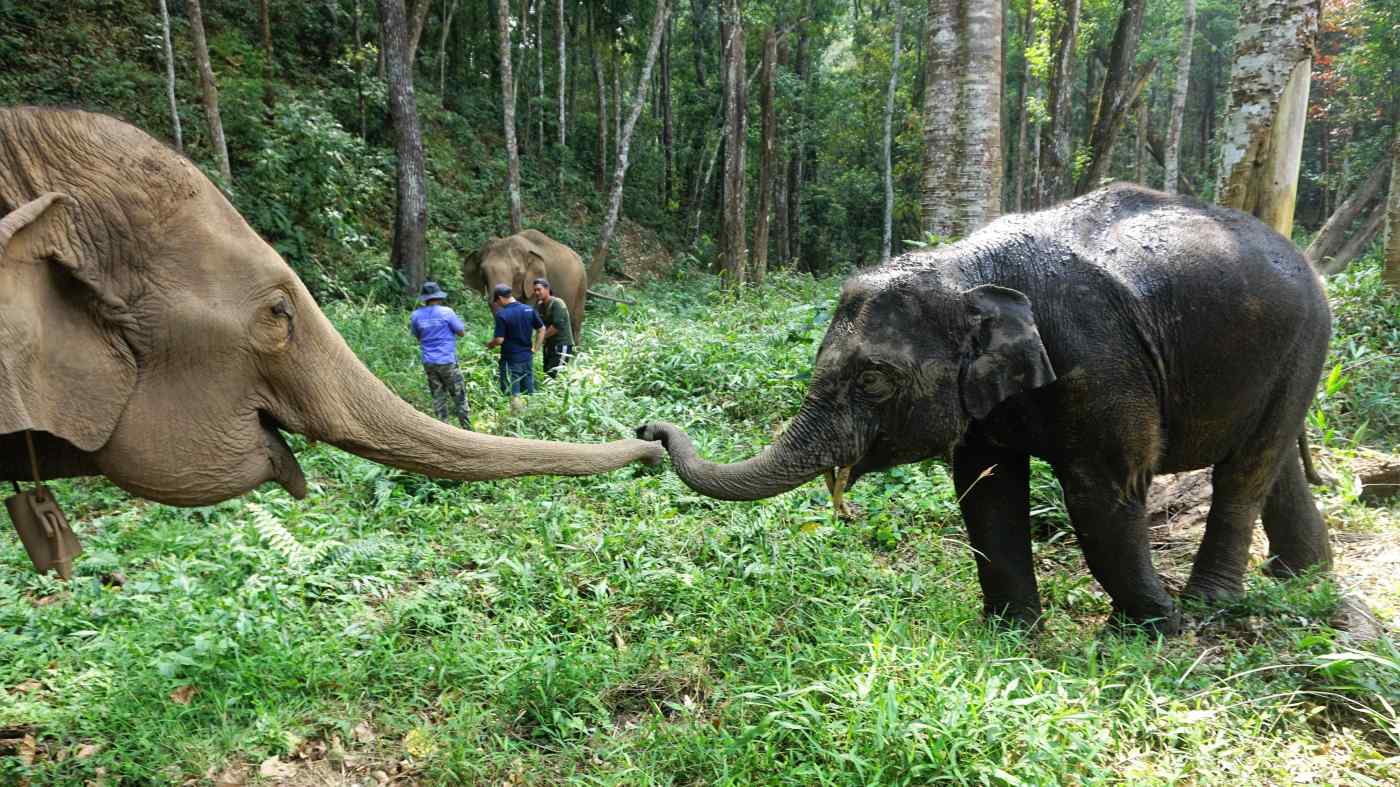 HUAY PAKOOT, Thailand -- As Thailand witnessed the departure of foreign tourists in the wake of the COVID-19 virus, another exodus, inextricably linked, was gathering momentum. The country's elephants, by the hundreds, were going home.

With scores of elephant camps -- top destinations for foreign visitors -- forced to close or scale down by a ban on international tourism in March 2020, the only viable option for the discharged elephants and their keepers was to return to the villages from which they came. Life there, it was hoped, would be easier, with cheaper access to food and a loving environment born of centuries-old bonds between man and pachyderm.

In one of the largest known elephant migrations in memory, many of the country's estimated 3,800 captive elephants trudged out of tourist sites ranging from northeastern Surin Province to the beachside towns of Pattaya and Phuket and the mountains around the northern city of Chiang Mai.

One group from Chiang Mai trekked for a week to return to Huay Pakoot, a village 180 km west of the city, where the Karen ethnic minority has kept elephants for generations. "After two days, the mahouts detected signs of happiness among the elephants. They picked up their pace. The mahouts did not need to guide them anymore. The elephants knew exactly where they were going," said Theerapat Trungprakan, president of the Thai Elephant Alliance Association.

At first the arrivals received a rousing welcome. Then, concern set in: How could Huay Pakoot, with a population of 600, sustain for any length of time the 80 elephants that suddenly appeared on its doorstep? 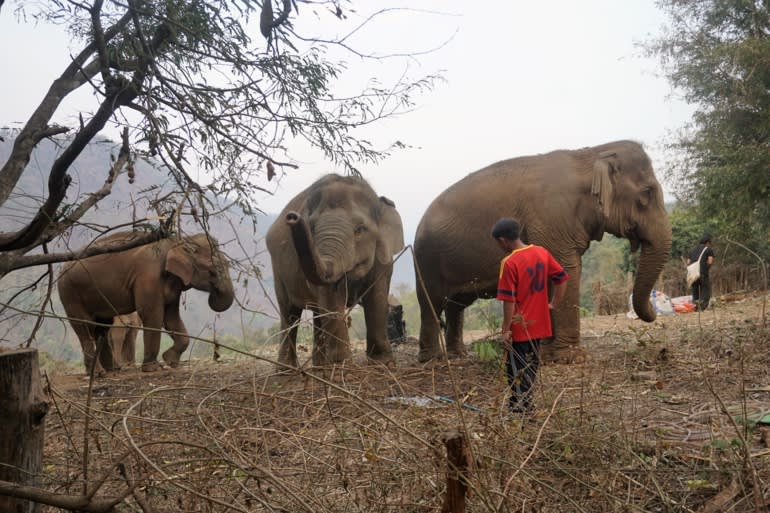 Top: Three old elephants are watched over by a villager. Old males especially may turn violent and even kill their mahouts. Bottom: Theerapat Trungprakan, president of the Thai Elephant Alliance Association and owner of the highly regarded Patara Elephant Farm, where tourists are educated in the ways of elephants. (Photos by Denis D. Gray)

Huay Pakoot and several surrounding villages once harbored one of the largest concentration of elephants in northern Thailand, where the powerful animals were used in the logging industry. Following a nationwide logging ban in 1989, the elephants and their mahouts departed to rent their services to the mushrooming tourist industry. Over the succeeding years the village environment changed dramatically.

"The elephants were returning home to the same place they were born, but the place is no longer the same," Theerapat told Nikkei Asia. The once-abundant forests where elephants could roam and satisfy their huge appetites have all but vanished, replaced by bald mountainsides seeded with corn grown for cheap animal feed. The soil has been doused with herbicides, pesticides and chemical fertilizers, all potential elephant killers.

Now, the elephants have to "share space with modern agriculture," said Satit Trachookwamdee, a former mahout whose family owns five elephants. He estimated that the animals could find only 10% of the food they need from the remaining forests, so the rest has to be trucked in from distant towns -- an expensive proposition given that an elephant can consume up to the 300 kg of fodder a day. 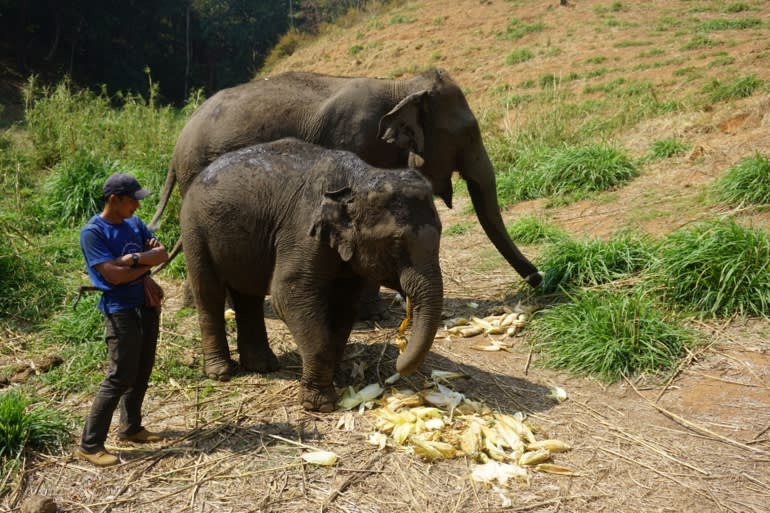 Top: Two mahouts rest after watching over elephants they lead into the forest to feed each day. Bottom: Elephants being offered corn, which must be trucked in since little local food is available to satisfy their huge appetites. (Photos by Denis D. Gray)

Satit said the animals spend much of their time in chains -- intended to stop them raiding crops -- which induces stress, especially among the younger males. Fights sometimes break out, in part because the elephants come from different locations. "It's like putting teenagers together at a summer camp," Theerapat said.

When an elephant does stray, the consequences can prove deadly.

Near Huay Pakoot, an 8-year-old female named Nana emerged from the forest and obligingly opened her cavernous mouth for two veterinarians from Chiang Mai University. She had recently suffered chemical burns on her tongue, her palate and the tip of her trunk after ingesting herbicides. Top: Owner Petsanguan Mathurosbenja with Nana, one of many elephants who have fallen sick or died after eating crops laced with herbicides, insecticides and chemical fertilizers. Bottom: Two veterinarians from Chiang Mai University -- Worapong Kosaruk, left, and Siripat Khammesri -- travel the country treating sick elephants. Only a few vets in Thailand are trained to care for elephants. (Photos by Denis D. Gray)

In an effort to help the animals, the university, Theerapat's group and the Thai government have launched what is believed to be the world's first mobile, multipurpose elephant clinic: a truck that can be converted in a few minutes into a high-functioning hospital unit or used to transport serious cases to one of Thailand's four elephant hospitals.

But it can still take days for medical aid to reach these remote areas, highlighting one of the drawbacks of keeping captive elephants in the countryside rather than at tourist sites where care was readily available. The villagers, many of whom live on the edge of poverty, often lack the income needed to maintain the giants animals.

"I prefer living here. There is more freedom," said Pongkavi Kwansaodaeng, stroking 5-year-old Dumbo, one of his four elephants, on a hillside adjoining the village. Around him at dusk some 20 others, from mischievous youngsters to old bulls, were attended by their mahouts and watched by village children and a knot of women dressed in traditional Karen blouses. "The elephants are happier here," he said. "You can see it by looking at their eyes and their expressions. They have more time to play and socialize." 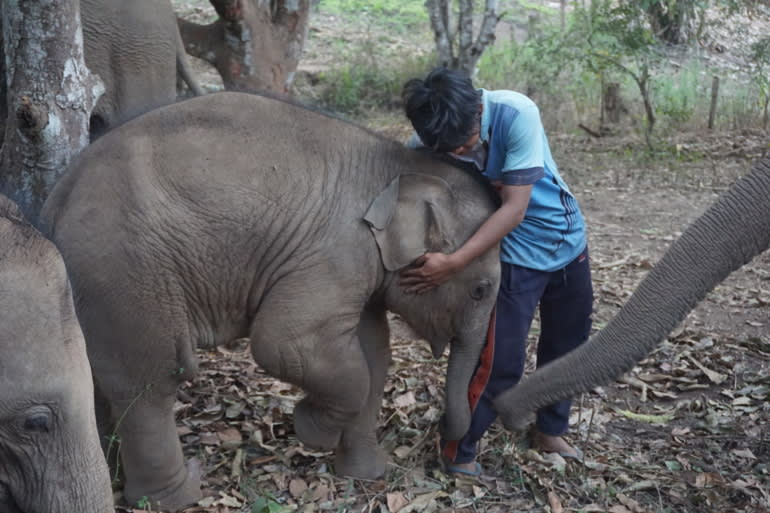 Mahout Pongkavi Kwansaodaeng hugs 5-year-old Dumbo, one of his four elephants who used to work at tourist sites before COVID-19 struck. (Photo by Denis D. Gray)

But Pongkavi admits that such an existence probably cannot last. When he worked at a tourist camp before COVID-19, he was able to earn 24,000 baht ($766) a month for each of the four elephants he rented. His savings, which are largely financing purchases of elephant fodder, will run out in less than a year, although speculation is growing that Thailand will reopen to foreign tourists in October.

In the meantime, some tourist operations are barely hanging on, pleading for donations or trying to raise some income from selling coffee, vouchers for future visits and photo opportunities for Thai teenagers posing with the few remaining elephants. Theerapat, owner of the Patara Elephant Farm near Chiang Mai city, said he currently gets about 10 visitors a week, compared with as many as 45 a day before the pandemic. Highly praised for its treatment and breeding of elephants, the camp is struggling to keep 40 on-site, compared with 81 before COVID-19. Theerapat said he has been forced to deplete his savings, take loans and sell property and vehicles to remain in business. "During the heyday I might have come to see you in a sports car," he quipped. "Today I arrived in a 40-year-old Range Rover."

Elephant tourism, which formerly earned Thailand up to 6 billion baht a year, will return sooner or later, said Theerapat, who hopes the crisis will be a trigger for reform. "Let's not think of elephant tourism as a business, but as a tool for conservation. So we have to design it right," he said.

In the past, few tourism operators managed to do that. In the industry's early days, "Disneylandization" was rife, with elephants shooting basketballs, kicking footballs and performing other circus-like tricks for visitors. The intelligent animals even learned to paint and play musical instruments. Physical abuse and dismal care were reported at some camps. 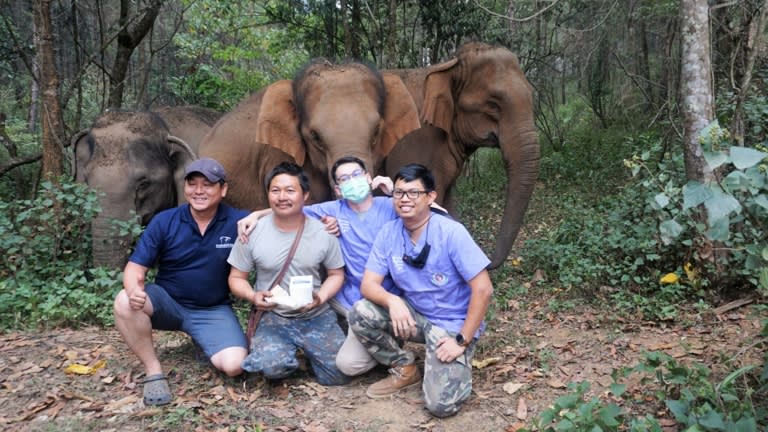 Reacting to criticism and to boycott calls from foreign and domestic animal activists, a number of owners stopped tourists from riding elephants, restricting visitors to activities such as feeding and bathing the animals. But that too, Theerapat said, was ill-advised. Without the daily exercise that riding afforded, overweight elephants suffered digestive ailments and pregnant females found it difficult to give birth. Some died while calving.

"We cannot have a tourism which just responds to what will attract more tourists but rather one based on the health of the elephants,'' he said.

For those like Theerapat, responsible elephant tourism appears to be the only realistic path to prevent the extinction of Thailand's captive population, the second largest in Asia after Myanmar. Release of large numbers into the country's fragmented and highly sensitive nature reserves would be fraught with difficulties. Returning to their onetime homes, where jobs no longer exist for them, carries an expiration date.

"Before, there were some who wanted to kill elephant tourism. Well, they got their wish. But what now?" Theerapat asked. "Who will take responsibility for their future?"