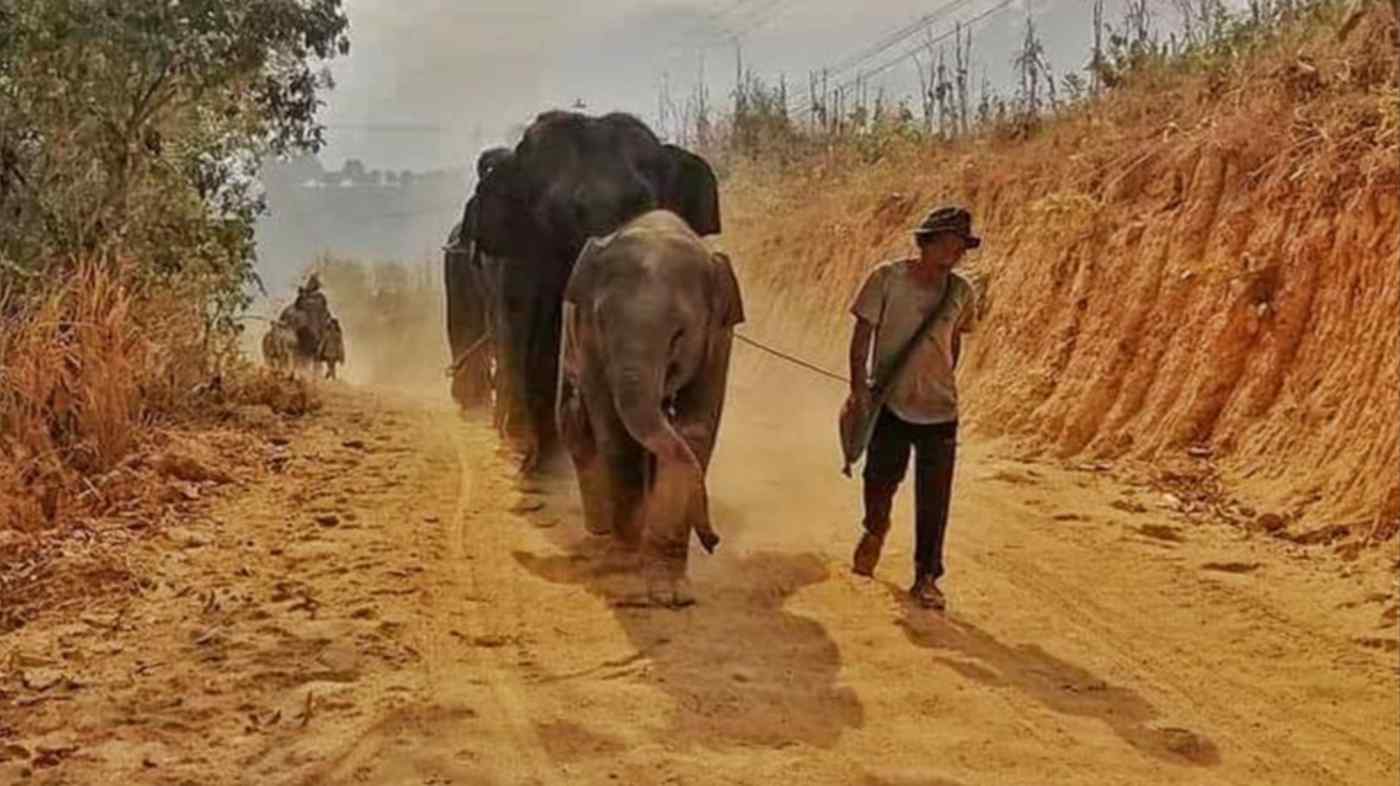 Some elephants and their handlers, known as mahouts, were expelled from camps that were unable to meet the costs of wages and elephant food after a government shutdown order in late March. Other elephant parks are still struggling to feed the animals and pay their mahouts.

"This could be a huge tragedy," said Lucy Field, chief operating officer of Trunk Travel, a Bangkok-based organizer of ethical tourism. "There are going to be lots of [elephant] deaths if something isn't done soon." Top:Activists target camps that chain elephants, saying the practice is cruel and can injure the animals. Bottom: Some camps house elephants in cruel conditions, chained in place with no room to move, urinate or defecate. (Courtesy of Save Elephant Foundation)

Lek, who is providing food to stranded elephants, said at least 50 were attempting a dangerous migration to their distant former homes in northern forests, trekking through countryside ablaze with fires as a result of land clearance fires set by farmers. "It's terrible," she said as she undertook a rescue mission. "They are walking in the hot sun, with nothing to sustain them. This is a crisis. We have to try and save them."

Elephant camps can be found throughout Thailand, even in beach areas such as Pattaya and Phuket, which are poor habitats for the animals but draw droves of tourists. But the real center for elephant tourism is Chiang Mai, which has about 90 camps and at least 900 elephants in its vicinity, according to Chatchote Thitaram, head of elephant and wildlife research in the Faculty of Veterinary Medicine at Chiang Mai University

Some of the larger, more established camps are likely to be able to ride out the current crisis, but smaller and newer operators that lack savings or other business operations that can provide replacement income are at risk of collapse, elephant experts said. 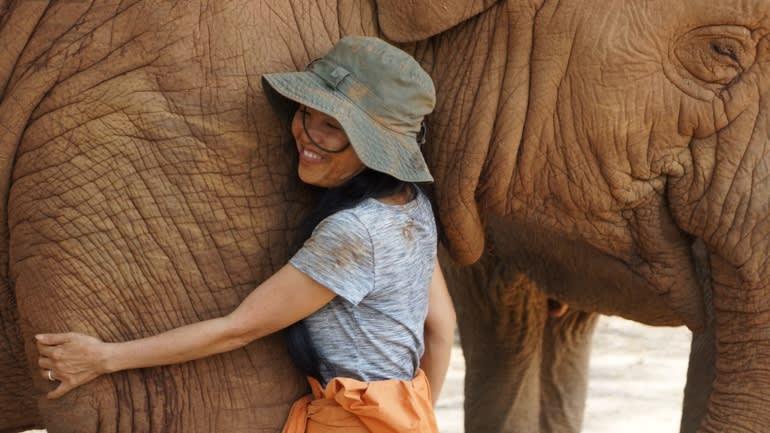 Some elephants seem to be heading southeast to Surin Province, on the Cambodian border, the region of origin for about 1,500 of the nearly 3,800 elephants registered as captive animals in Thailand. This is in addition to 3,000 wild elephants, according to the Asian Elephant Specialist Group, which monitors and reports on the numbers around Asia. Others are heading north to the Myanmar border area, from which many other elephants and their mahouts originate.

Clusters of as many as five elephants each have lately been spotted along roads north, said Alexa Bay, who runs Chai Lai Orchid, a Chiang Mai eco-lodge and home for rescued elephants. Villages along the Myanmar border may have the space to feed and house the elephants, which need 100 kg to 200 kg of food a day and must walk at least 5 km a day for exercise. But Surin, where some are heading, is 800 km from Chiang Mai -- a perilous trip that could take many weeks at elephant pace.

Chatchote said he was concerned that mahouts may sell elephants to illicit logging operations, which were banned in 1989 but are reportedly still operating in border areas. Or, he said, the trainers could move to cities, using elephants to beg for food -- a commonplace sight in Bangkok until laws outlawing the practice were finally enforced over the past decade. 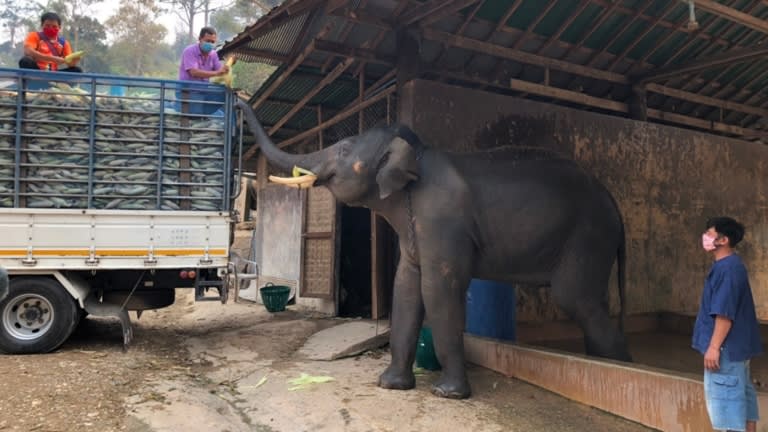 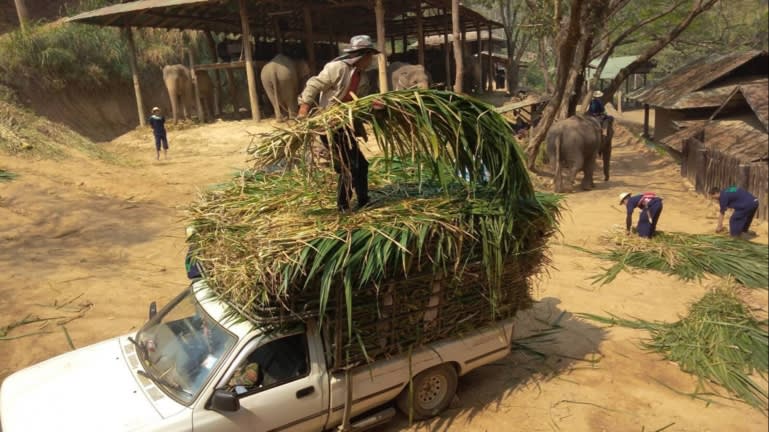 Top: Feeding time at Maesa Elephant Camp, one of Thailand’s biggest and most successful camps for the animals, in Chiang Mai. Bottom: Feeding the 78 elephants at the camp is a massive and never-ending task, as the giant animals consume 15 tons per day. (Courtesy of Maesa Elephant Camp)

Releasing elephants into the wild is banned by Thai law, legislation enacted to protect the estimated 3,000 wild elephants that are already suffering from deteriorating habitats and overpopulation. Finding alternative shelters could help, and some have already been arranged for a dozen elephants in the Chiang Mai area. Bay has taken in a pair of elephants at one property. "But it's not easy. You need to have enough room, and elephants often don't get along," she said. "It's a scary situation."

Amid the coronavirus lockdown in Thailand, elephant activists have developed various strategies to help the distressed animals, including public funding appeals and private virtual visits with elephants in some sanctuaries. "It is amazing to see the benefits this is having," said Field, whose organization has created the online campaign #datewithanelephant to raise funds for elephant care and which offers amusement and education for locked-down families around the globe. "One 30-minute session is enough to feed one elephant for a full day," Field added.

Lek, a tireless animal advocate, has already been caring for 87 rescued or rehabilitating elephants on her 48-hectare sanctuary about 11 km outside Chiang Mai, where they share fields and woods with about 700 dogs and 800 cats. Besides feeding other elephants in the area, Lek is also coordinating an urgent appeal to find sanctuary for stranded elephants in Phuket, Phang Nga and Krabi in southern Thailand. 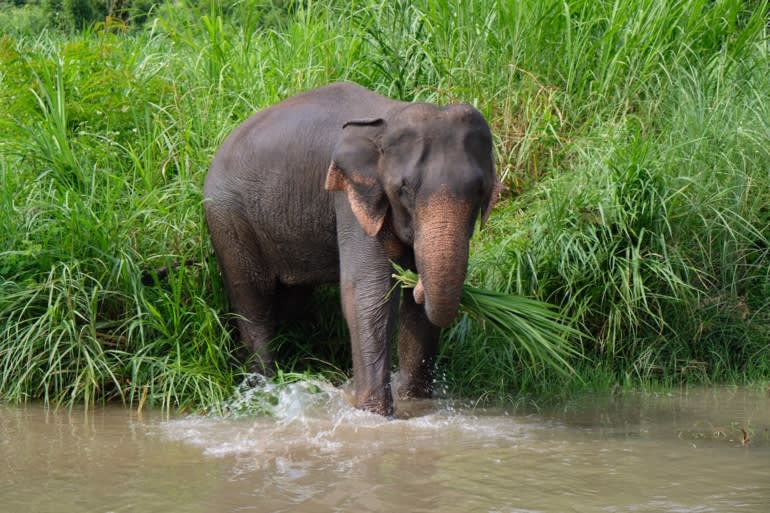 A free-roaming elephant in an ethical-certified sanctuary, where there are no performances or riding, only the pure beauty of nature. (Courtesy of Trunk Travel)

Phuket has an estimated 20 camps, "but more seem to have been opening every month," said Urs Fehr, who launched the Green Elephant Sanctuary on the resort island early last year. He has 14 elephants and funding for at least a year -- using money he had saved to establish a veterinarian clinic -- but fears that many other elephants will not find help.

"The situation is quite dire," said Vincent Gerards at Phuket Elephant Sanctuary, which also seeks to help animals in the area. Gerards said many camps had sent elephants back to owners "who are now faced with the challenge of feeding them by finding alternative work such as logging." PES is distributing food to camps in need, using funding from Lek's foundation.

Lek added: "This is totally unexpected. Before, we had problems like SARS. But nothing like this." On the positive side, she said, the crisis offers Thailand a chance to rethink elephant-related tourism, which has become a large industry in Southeast and South Asia. 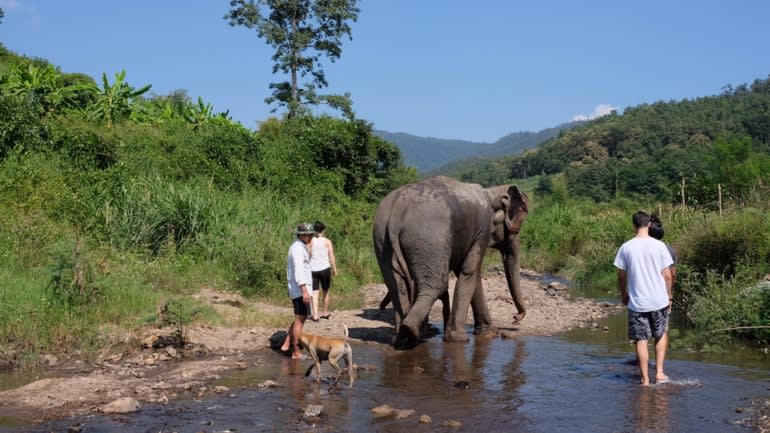 There are an estimated 45,000 elephants in Bangladesh, Bhutan, Cambodia, China, India, Indonesia, Laos, Malaysia, Myanmar, Nepal, Sri Lanka, Thailand and Vietnam, about half of which are in India, according to the Asian Elephant Specialist Group.

But Thailand is the only country in the group that has more elephants in captivity than in the wild, and the only one that has historically has had large numbers living in urban areas. Those in camps are often treated as circus animals, performing for tourists and doing tricks such as painting or playing musical instruments with their tails.

Camps have been around for decades and continue to proliferate, despite criticism from animal welfare rights. More recently, due to mounting international pressure, many travel companies have begun to demand certification of camps by animal welfare groups, and some camps have responded with welcome changes. In October, Maesa Elephant Camp, one of Thailand's oldest and largest camps, banned elephant riding.

"It was an easy decision," said Anchalee Kalampichit, managing director of the Chiang Mai camp, which was founded in 1976 by her father. 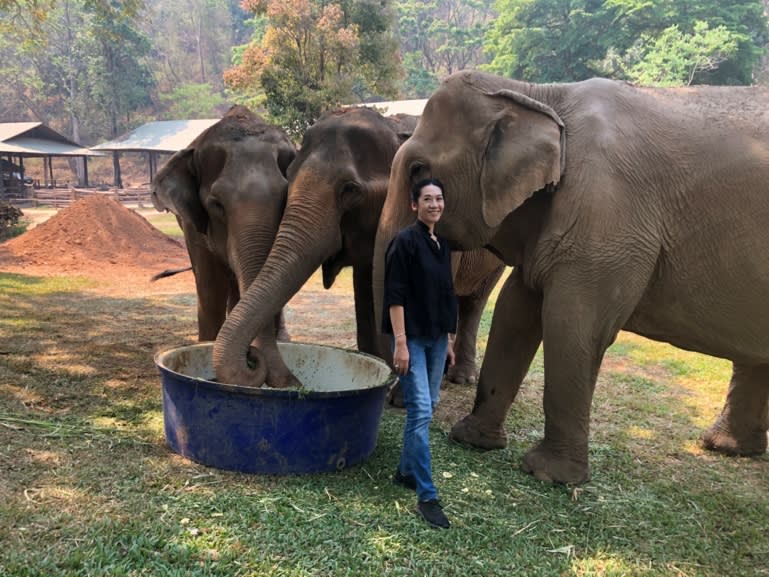 Anchalee Kalampichit was applauded by animal welfare groups when she took over Maesa Elephant Camp, opened by her father in 1976, and made it a model of ethical practice, banning shows and elephant riding. (Courtesy of Maesa Elephant Camp)

The catalyst was a news article criticizing the camp's highly successful breeding program. "The writer called it 'a nursery from hell," she recalled. "I thought, 'that's it,' and announced the change."

Maesa, which attracted 500 to 1,000 visitors a day before the COVID-19 emergency, needs to spend $1,100 a day on 15 tons of food for the elephants but is well-placed to survive the crisis, and is already planning for a very different future.

"We will keep all our elephants and pay everybody," Anchalee said. "When this crisis is over, we'll have a new operation. The elephants will be free, roaming in the forests, chain-free. People will come to see them in their natural habitat. ... It's an experiment, but I think this is a good time to pause and rethink how we've been doing things for so long."